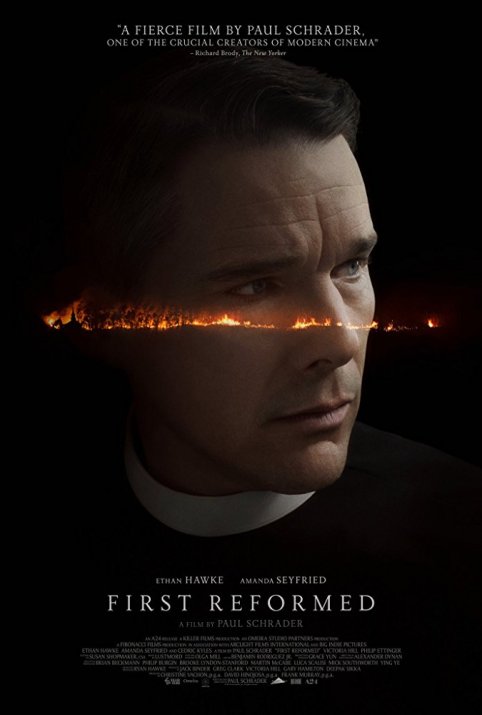 The world is in pretty rough shape right now. Not to get too political, but we seem to find ourselves constantly in the midst of Constitutional crises, the world is melting, there’s a school shooting every other day, and everyone seems furious all the time. So, yeah, it’s not too fun to live in reality nowadays. Which has made it nice that there are so many quality pieces of escapist entertainment in the world right now. It’s no good to hide your head in the sand and ignore the horrors of the world, but wallowing in them isn’t going to do any good either. So it’s nice to head out to the movies and just see something fun. Which is where Upgrade came in earlier this week. But, it’s not all schlocky action and cyborgs. Sometimes you need to go see a movie that’s almost guaranteed to bum you the hell out. Which is where First Reformed comes in. I’d heard nothing about good things regarding this film, and despite having next to no experience with the directing work of Paul Schrader, I figured I’d go check out a film that I really only knew as “the depressing priest movie.” Other than that, I wasn’t really sure what I was getting myself into when I sat down in the theater to see First Reformed. Which, honestly, may be the best way to tackle this movie. Because it’s going to take you on a hell of a trip, and if you don’t fully understand where you’re going it’s even more upsetting when you get there.

First Reformed tells the story of a man named Toller who works as a reverend in a small church in New York that’s more a tourist trap than a place of worship. Toller’s life completely fell apart when his son died in the military, killing his marriage as well, and he spiraled the drain until getting this token job from a pastor named Jeffers who runs the mega-church in town that people actually visit. His job is to run tours, write bland sermons that few people will hear, and just generally not rock the boat. His life is pretty boring, just living inside the parsonage and hiding his waning health from everyone around him, until two events arise that forever change his life. The first event is the fact that his little church is about to celebrate its 250th anniversary, which is becoming a bigger and bigger deal for him to deal with, especially because he has to work with the conservative billionaire who technically owns the church. And the second event is when he’s approached by a young couple who are having an issue in regards to their unborn child. The couple are environmental activists, and the husband has become convinced that it’s morally wrong to bring a child into a world that seems promised to be destroyed within its lifetime.

Toller finds himself trying to convince the husband that having a child in this horrible world is worth it, and that God will forgive humanity for destroying the planet. Which doesn’t go well. Because the husband ends up committing suicide, and forcing Toller to be the one who finds him. Toller begins doing everything he can to help out the newly widowed Mary, while becoming increasingly fascinated with the husband’s beliefs. He begins doing research, and finds that the planet truly is in terrible shape. And, to make matters worse, it appears that the billionaire who is now calling all the shots for this upcoming celebration is one of the world’s largest polluters. Toller’s life slowly begins to fall apart as he becomes obsessed with the environment, he starts falling in love with Mary, and his health starts getting worse and worse, apparently from cancer. But, he starts to formulate a plan. Toller finds out that Mary’s husband had been planning a suicide attack, even building his own suicide vest, and Toller starts to get it in his head that he should pick up the baton. He begins devising a plan to ignite the vest during the celebration, killing himself and the corrupt businessman while bringing the plight of the planet into the forefront. Things escalate and become ever more complicated from there, leading to an ending that is certainly unexpected. 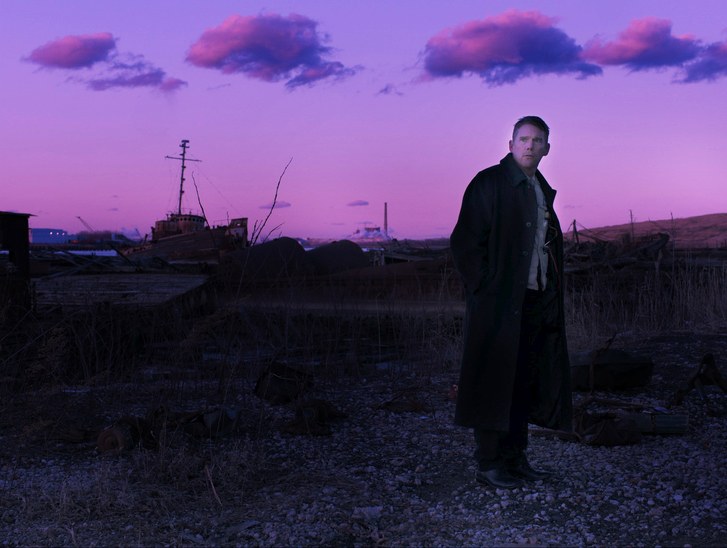 First Reformed is not an uplifting film. In fact, it’s a complete bummer. But, it’s a beautiful bummer. It’s a film that’s impossible to take your eyes away from, getting absolutely swept up with its fascinating story, and its fully realized characters. The the film is gorgeously shot, a mixture of incredibly barren and stifling rooms, disgusting environmental nightmares, and unbelievably tense and awkward conversations. It’s a film that that is told almost completely in hushed tones, people desperately trying to remain civil about things that they’re passionate about, not wanting to rock the boat too badly. Ethan Hawke is frankly spectacular in this movie, bring Toller completely to life, in all of his impotent and frustrated glory. He’s a man who is totally defined by what he can’t do, and when he finally finds a cause that he thinks he can fight for, he ends up going immediately to extremism, willing to go out in a literal blaze of glory.

Which makes Toller’s life all the more tragic. Every character in this film seems to be obsessed with complacency. They all want to just keep their heads down, not get too passionate about things, and just keep doing what they’re supposed to do. Toller has led a terrible life. He’s given himself over to God, and in return his life has been shattered. His life has passed him by, and he’s become a passenger in his own story. Until he’s forced to reckon with a simple question that rocks him to his core. “Will God forgive us?” This question completely dominates Toller’s mind to the point that he finds himself legitimately considering a protest suicide. His entire life has been spent controlling himself. He has devoted his life to religion, the service of God, something that you would imagine he’d feel very passionate about. But he’s just numb. He’s going through the motions. Until he finds something to actually care about. He finds himself something not only to care about, but to be mad about. He finds righteous anger, a cause that he not only will die for, but kill for. I don’t abide murdering people to prove a point. The idea of killing others for your own cause is completely abhorrent. But, Toller still finds something in his life that he cares that deeply about, and it’s something that’s incredibly important to the world. Killing people won’t convince others that we need to fix the environment, but that doesn’t mean it’s not a cause worth fighting for.We all need a cause like this, we just can’t go as far as Toller is willing to, otherwise we become no better than the people we’re fighting against.

First Reformed was written and directed by Paul Schrader and released by A24, 2018.