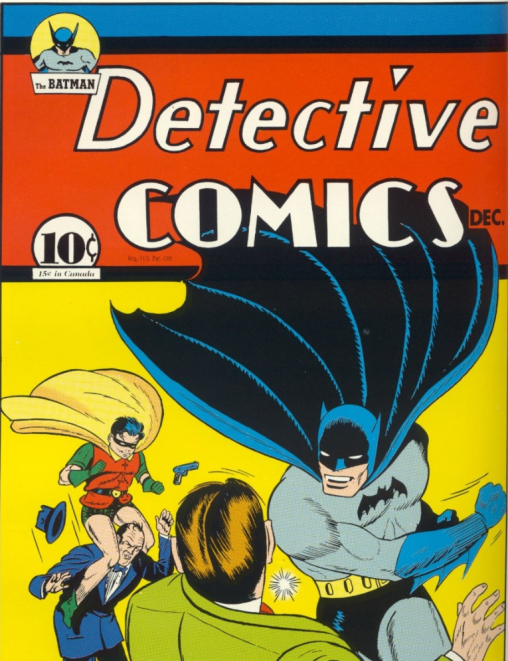 Hello everyone, and welcome back to yet another installment of Bat Signal, my ongoing quest to read every issue of Detective Comics in random order and with basically no context. And this week we’re taking another trip to the earliest days of Batman’s adventures. This is one of the earliest comics we’ve talked about during this project, which can always be a little worrisome. I mean, the earlier in Batman’s tenure we go the more likely something racist is going to pop up. Luckily, we don’t get any racism in this issue! Instead, we get a decent little adventure featuring that peculiarly swashbuckling version of Batman that was so prevalent from this era.

The story begins with Batman swinging around an industrial area in Gotham, hunting down the vast armies of criminals that seem to roam Gotham City. And, luckily, there are some men robbing a warehouse, so Batman leaps into action and begins punching the hell out of them while spitting out rapid-fire quips. Batman becomes a hurricane of punches, knocking out all of the thugs until only one man is standing. But, Batman takes some pity on him, since he’s not exactly a man at all. He’s just a teenager, so Batman says he won’t beat the bajesus out of him, and will instead just arrest him. But the kid doesn’t want to go to jail, and instead offers to rat to Batman. He tells the Caped Crusader that he’s been working with a local gangster, and they have a plan cooking with some mysterious professor, and hands Batman some strange antidote pills that have been passed out to them. So, Batman tells the kid that he’s going to go to the meeting, and tell him what they plan.

The kid then heads off to his meeting that night with his fellow gangsters, and we get to see who this mysterious professor is. It’s Hugo Strange! We’ve seen Hugo Strange a couple times so far during this project, including another appearance in an even earlier issue which seemed to end with Strange dying. But, this is obviously not the case, because he’s here with a very odd plan, which seems more in the milieu of a different Batman villain. He’s invented a special “fear dust” which can be sprayed out of a gun, which they plan on using to throw Gotham into chaos for their own gain. Seems like more of a Scarecrow thing, but whatever. There’s only one problem. The plan is scheduled to begin the next day at noon, twelve hours before the kid is scheduled to meet with Batman.

So, the next day some of Strange’s men begin storming Gotham City, spraying the fear dust at people and pulling off all sorts of crimes while the people of Gotham are utterly helpless. And, that night, the kid goes to meet with Batman, finally able to tell him what’s going on, only to find that some of the other criminals happened to follow him. They get the jump on Batman, and are able to knock them out, dragging him back to their hideout to meet with Strange. Batman does his best to fight off the criminals once they’re inside the hideout, but he’s futilely outnumbered, and they’re able to knock him out. However, Batman ends up waking back up pretty quickly, and eavesdrops while Hugo Strange gives them their orders. And, once Batman hears enough of the plan, he hobbles out of the room, pretending that he’s still weak, only to take the advantage and attack them all.

Batman ends up beating up a whole bunch of the goons, but Hugo Strange had already escaped, so he has more work to do. So, Batman calls Robin and tells him what’s going on, and the two agree to split up. Since Batman knows where the planned attacks are he and Robin are able to get to the points right before the goons arrive, so that they just show up, beat up the goons before they could even know what’s happening, and stop them. We see Batman knock attack a guy in a subway, Robin drops from the sky and knocks out some guys near the waterfront, and Robin even stops a group of goons outside the theater district.

Slowly but surely they work their way through the list of targets, until there’s only one last attack. Because all of these attacks were isolated ones, but Strange gave himself the most wide-spread attack. He’s gotten his hands on an old crop-duster plane, and plans on flying around Gotham, dusting the city with his fear dust. Luckily, he said where the plane was going to be parked, so Batman is able to get there just in time so that he and Strange can start fighting. Batman’s obviously more physically gifted than Batman, but Strange is also wielding a massive wrench, so he uses that to bash on Batman. It doesn’t work out though, and eventually Strange slips off a massive cliff-side that just so happened to be right next to the plane, seemingly plummeting to his death. Batman then debriefs with Robin, and the comic ends in the greatest way that I’ve ever seen.

This issue is pretty damn fun. Huge Strange isn’t exactly my favorite Batman villain, but I’m fascinated by how many times he popped up in these early stories. He’s basically just Professor Moriarty, which can be a lot of fun, even though this particular scheme really would have worked better if it had been Scarecrow, but this story actually predated the character by just a little bit. As it stands though, it’s a pretty fun little Batman story. We don’t really get to see any detective work being done, but we get to see Batman racing around and stopping a ludicrous supervillain plot while spitting out quips like he’s Daredevil. This version of Batman wasn’t the one who stuck around, the swashbuckling adventurer who punched and made jokes at the same rate, and I think that that probably was the wise call in the long run, but it’s nice to take occasional trips to see a kind of Batman that never caught on.