Solo and the Extended Universe

As a fan of the Star Wars franchise, things certainly have been strange over the last few years. When it was announced that Disney was buying Marvel and was planning on starting thing up again, making a new trilogy along with a series of spin-off films, I think everyone was a little hesitant. We’d been scorned by what happened when Star Wars was totally and completely in the hands of George Lucas, and all we got were the Special Editions and the Prequels, so we had no real idea of what the House of Mouse would do with the reigns. And, it’s been kind of strange. I’ve really enjoyed the two Episodes we’ve gotten, and I actually love the Last Jedi to the point where it’s right up there with Star Wars and Empire for me. But, Disney has also been experimenting with prequels of their own. The “Star Wars Stories” as they’re being called, are spin off stories that were meant to tell stories that occur outside the larger Skywalker saga. Which hasn’t exactly occurred. The first attempt to do this, Rogue One, ended up telling a story that literally ended on the face of Princess Leia and filled in information that made the entire original Trilogy happen, and ended up being a mostly enjoyable movie that gets held down by weird studio interference and a muddled script. It was a bit of a stumble, but overall it was fun. However, we then learned about their next attempt, and it seemed a little worrisome. It would be a Han Solo prequel that would serve to fill in every bit of mystery that the character brought with him in the original Trilogy. And, it seemed troubling. And that wasn’t helped by another ridiculous case of studio interference, firing the original directors incredibly close to completion of the film. Everything about the project seemed to point this film into the direction of becoming Disney’s first unmitigated failure on the Star Wars front. But, luckily, I don’t think that happened. Because, against all odds, Solo is fine!

The film follows a young Han Solo as he becomes the ineffectual scoundrel we know and love. Things open up on the slum-planet of Corellia, with Han barely surviving with his girlfriend Qi’ra. The two manage to plan a route off of the planet, but before they can pull it off Qi’ra is kidnapped and Han is forced to join the Imperial Navy in order to get off the planet alive. He attempts to do the bare minimum to survive in the Imperial Army, hoping to scrape together enough money to get a ship and save Qi’ra. However, this doesn’t go well, and Han is thrown into a war he doesn’t understand, before running into a strange group of mercenaries who are disguising themselves as Imperial soldiers. Han tries to ingratiate himself with the group, but they don’t trust him and end up turning him over to the Imperials, who attempt to kill him by tossing him into a cage with a monster they’ve acquired. Luckily for Han, this monster ends up being the Wookiee Chewbacca, and it just so happens he speaks a bit of Wookiee. Han is able to calm down Chewbacca, and convince him that they should escape together and join up with the mercenaries. The two join up with the criminals, and are welcomed aboard for their latest heist. They meet with Tobias Beckett, his wife Val, and their alien friend Rio. They plan on stealing a massive supply of fuel used for space-travel for a powerful crimelord named Dryden Vos. They do their best with the heist, but they run into some competition when a rival crime organization known as Enfys Nest show up and ruin the heist, while also losing Val and Rio. Becket, Chewie, and Han then have to go meet with Vos, and his surprising chief lieutenant, Qi’ra. Vos wants to kill Beckett and crew for the mistake, until they come up with an alternate plan. They’re going to fly to the planet Kessell to steal some raw fuel.

But, to pull off a heist like that, they’re going to need an incredibly fast ship. Luckily, Qi’ra knows a retired smuggler who supposedly has one of the fastest ships in the galaxy. So, Han, Chewie, Beckett, and Qi’ra go meet with Lando Calrissian and his robot L3-37. After some failed gambling he agrees to take them through the incredibly dangerous route to get to Kessel, in order to steal the raw fuel and then blast to a refinery as quickly as possible, before it can spoil. Using L3’s expert maneuvering, they’re able to make it through the Kessel Run, and arrive on the mining planet. They then pull off a plan that almost immediately falls apart, involving a slave revolution. But, they manage to get the fuel, and despite losing L3 they find a short-cut through the Kessel Run and find their way to the refinery planet. Which is when everything starts to fall apart. Lando abandons them right away, and they end up finding themselves face to face with Enfys Nest, who have followed them there to take the fuel. But, not to sell it. It turns out that Enfys Nest is a Rebellion organization, and they want to use the fuel to help people. And, Han decides to go for it, even though this causes Beckett to give up and abandon them. So, Chewie, Han, and Qi’ra get ready to screw over Dryden Vos. And it doesn’t go well. There’s a multitude of double-crosses, including Beckett showing up to tell Vos what they have planned. But, after a fight that leaves Vos dead, the good guys win. Han and Chewie give the fuel to the Rebels, Qi’ra decides she’s become a different person from Han and leaves to take Vos’ place in the criminal empire he created, and Han kills Beckett. Han and Chewie, left alone, decide to go cheat Lando at some gambling, win themselves the Millennium Falcon, and begin going on adventures together.

Throughout the entire production process of Solo one couldn’t help but feel like it was a disaster waiting to happen. They would be recasting beloved characters, telling a story that didn’t feel like it needed to be told, and the only two people who seemed capable of making it work were fired because the movie they wanted to make was too unique. These were not good signs. But, against all odds, Solo ended up more or less fun. It had issues, but I think that the good overall outweighed the bad. The characters were fun and well-portrayed, the plot was a light-hearted heist, and it actually had some interesting ideas to toss out. Unfortunately, a lot of that get bogged down by the problems with this movie. There are moment that clearly feel like they’re remnants from a previous version of the film, or elements that don’t make a whole lot sense and have more logical explanation that aren’t present. Exemplified by the idea that the leader of Enfys Nest clearly seems designed to have been Beckett and Val’s daughter, but it’s just glazed past. But I think the thing that really hindered the film was its obsession with continuity. Every few minutes the movie would make a reference to something that was going to happen in the later films, or explain away some minor aspect of Han’s personality that really never needed to be known. Hell, we learn why his name is Solo in this movie. And it’s all completely irrelevant, keeping this movie from telling its own story, forcing it to remain trapped in the shadow of the other films.

Which is a shame, because a story about Han Solo, Chewbacca, Lando Calrissian, and a stable of rogues travelling around the galaxy and pulling off heists seems like a really solid idea. True, not finding out about Han’s many failed exploits keeps his mystique intact in the other films, but it still is a potentially fertile source of stories. Now, I do consider myself a Star Wars fan, but there’s a pretty huge gap in my knowledge of the franchise. I’ve never dove into the weird and wild world of the EU. Yeah, most of that got erased during the Disney sale, but it’s still decades worth of stories that fleshed out every conceivable corner of the Star Wars universe. It seems unwieldy, mostly terrible, and it’s probably good most of it got erased. But, it certainly feels like this film comes from a similar mold. It told a story that didn’t need to happen, it was full of as many references as possible, and it just ended up being less interesting than you’d hope it to be. I enjoyed Solo, but I can’t imagine it’ll be remembered as a great entry into the franchise. It was fine. And it didn’t seem to want to be anything more than that. Just like a majority of the EU. Disney wiped everything clear, but is now rebuilding the EU, filling the shadowy corners of the Star Wars saga with information and stories that seem to exist solely to exist, and Solo seems to be confirmation that that’s where they’re going. I enjoy the Episodes, but these Star Wars Stories need to become something different, they need to get away from the Saga, and they need to evolve. The Last Jedi was all about learning from the mistakes of the past and trying something new. But, this movie represents the opposite of that, a film that wants to revel in the mistakes of the past. It’s fun, but it’s not important. And after the Last Jedi I was hoping that Star Wars would remain more important than the EU.

Solo was written by Jonathan Kasdan and Lawrence Kasdan, directed by Ron Howard, and released by Walt Disney Motion Pictures, 2018. 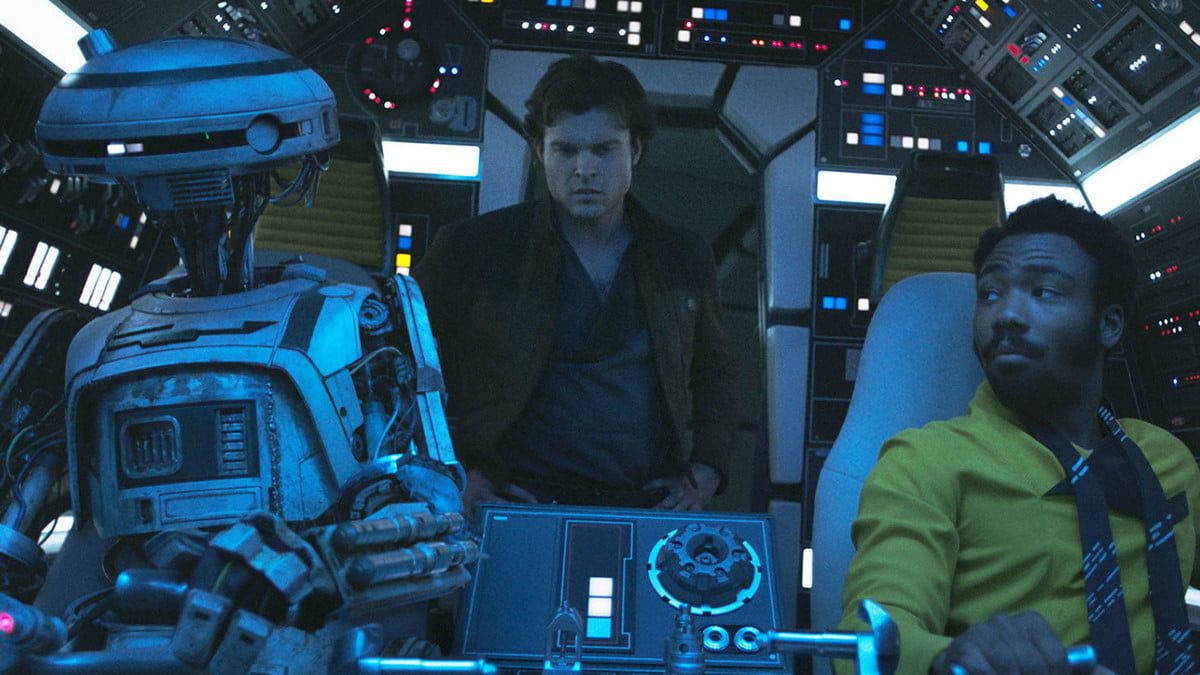