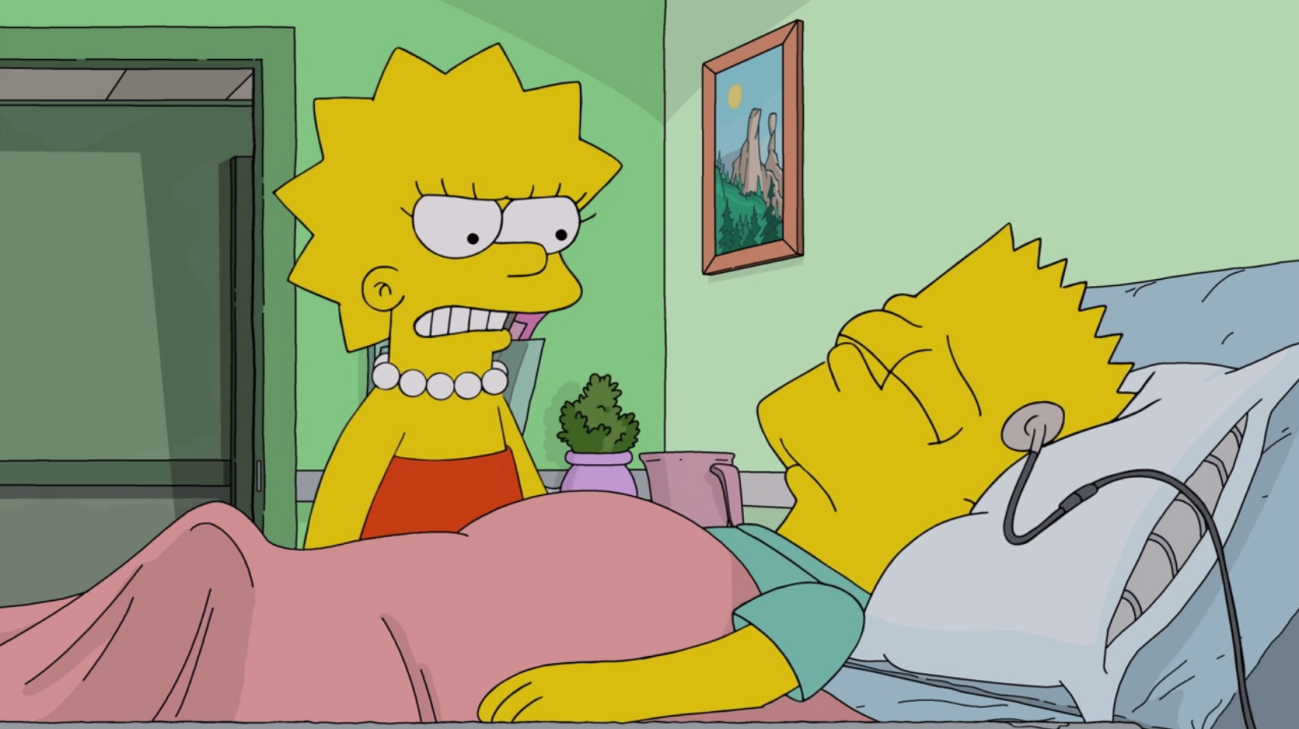 Well everyone, we’ve made it through yet another season of the Simpsons. And, it’s been a little rough. Honestly, when I first started this season, I was pleasantly surprised. Maybe it was the fact that I was nearing the end of the main form of this project, or maybe they front-loaded the season with solid ideas, but the first half of this season was fun! Then it came back from winter break, and things got dire. There were terrible episodes and real-life controversy, and just a general lack of quality. And, now it’s done. And, apropos, we’re going to be ending on an immensely strange and lackluster episode. It feels right.

The episode starts off on a dark and stormy night, where Bart is sitting in his room, playing around on his laptop while clearly baiting Lisa for a prank. He’s loudly saying that he’s playing a game that’s supposed to be the hardest test in the world, and will definitely prove if you’re a genius of not. And, of course, Lisa falls for it and comes in to play around with the maze.

And, it’s a trap. She makes it through a couple levels, and right when her attention gets completely drawn in a scary face and a loud noise appear on the screen, causing her to freak out. You know, like those things that went viral on the internet in like, 2005? Topical as always, Simpsons.

Anyway, Lisa freaks the hell out, and Bart recorded it, and then of course posts it to the internet, where it goes viral. Lisa is furious about this, and swears that she’s going to get vengeance on Bart. And, oddly, Bart kind of encourages her, telling her that if she ever sees the opportunity to prank him, she should take it. This is called foreshadowing.

Bart and Lisa then head downstairs to be with the rest of the family, right as the storm outside causes some havoc. A lightning bolt strikes the house, and knocks the family’s internet out, and they promptly all go insane. Marge recommends that they all gather around and play a board game, but the rest of the house gets very hostile to that suggestion for some reason, and they decide to find alternative entertainment.

Luckily, Homer has a weird idea. He sees that they still have power, so he decides that the family should head down into the basement and get out his old VCR and his collection of VHS tapes. The kids act like this is some sort of alien technology, which I guess tracks if Bart was born in 2008 now, and they mock the strange things that Homer has recorded, like Riccola ads and 80’s workouts.

However, after a while the VCR breaks, and it starts eating all the tapes. Homer freaks out, and decides that they need to try and find a VHS repair shop in the middle of the night. Unfortunately, Homer doesn’t know how to find such a repair shop without the internet. Even though I think he’d also need a time machine. Anyway, Homer decides that they need to get some internet. And, luckily, he has an idea.

For some reason Ned’s house clearly still has internet, so Homer comes up with a plan to steal their router. So, Homer and Bart go get a rickety metal ladder, and get ready to use it to climb up to Ned’s attic, where he’s keeping the router for some reason, so they can steal it. But, Homer’s too fat to use a ladder, so he forces Bart to climb up and do the stealing. Bart does manage to get all the way up there, but when he reaches the top rung of the ladder he’s struck by lightning, and plummets down to the ground.

The family then rush Bart to the hospital, and find that he’s in a coma. Dr. Hibbert shows up and tells them that Bart will probably snap out of the coma soon, as long as he gets some reassuring voices spoken to him. But, as soon as he says that he leaves the room, and Homer and Marge go with him, leaving Lisa alone with Bart, finding herself in the perfect position to prank her brother.

So, Lisa starts messing with Bart while he’s in a coma. She initially tries to tell him he’s in Hell, but he seems to like that, so she switches things up and starts talking about death. And, this really starts to have serious effects on Bart. We then start spending most of the episode inside Bart’s head, while he’s grappling with the strange things that Lisa are telling him.

It begins with Bart in his bedroom, being woken up by the same lightning storm that put him in a coma. He’s confused about what’s going on, and that’s made even worse when the ghost of Maude Flanders arrives, telling Bart that she’s not going to stop harassing him until he helps her with unfinished business.

Bart freaks out about the appearance of a ghost, and starts trying to escape Maude, barricading himself in the treehouse with a pile of crucifixes, thinking that will scare her away. It does not. Maude keeps showing up, harassing Bart, who ends up getting some advice from a dream version of Milhouse, who arrives and tells him that he should go visit a therapist.

So, Dream Bart goes to see dream Milhouse’s dream therapist, and he tells the man all about the ghosts he’s been seeing. The therapist is very interested, especially be cause it turns out that he’s a ghost as well, since he just committed suicide moments before Bart arrived. He explains that Bart has the ability to see the dead, and it’s now his duty to help ghosts move to the afterlife by dealing with unfinished business. The ghost therapist says that his unfinished business revolves around another therapist in his office, who he hates. So, he had Bart get revenge on the guy by making him do the same scary maze he did to Lisa, just mildly spooking the man. This is enough to let the therapist move on to he afterlife, and gain Bart a reputation as someone who can solve ghosts’s problems. In his coma dream.

Bart starts travelling all around Dream Springfield, helping various ghosts with their issues. He burns Nelson for some murdered ants, destroys a train for a cut in half hobo, helps Johnny Tight Lips whack a guy, among others. And, the whole time he just keeps ignoring Maude, which is making her more and more mad, which is causing his body back on Earth to have issues.

Lisa becomes worried that she made a mistake, and talks to Dr. Hibbert. He says that she needs to make Bart happy, otherwise he’ll die. Unfortunately, as soon as he imparts that knowledge Homer shows up, and starts complaining about death, which finally causes dream Bart to talk to Maude. And, as you may have guessed, she’s mad that Homer’s responsible for her death.

So, Bart plans some revenge on Homer, which involves getting the bullies to assassinate Homer in an alley outside Moe’s with t-shirt cannons. Maude then is at peace, and floats up to heaven. Unfortunately, this means that dream Homer is now dead, and and becomes a ghost.

Bart feels terrible about killing his father, but takes solace in the fact that Homer will hang out with him until his unfinished business is completed. But, Homer doesn’t have an unfinished business, and gets ready to fly to heaven. Bart can’t let that happen, for some reason, and shoots Homer’s ghost with a t-shirt, causing it to fall down into Homer’s body, bringing him back to life.

And, while this is happening, Lisa is begging real Bart to wake up, telling him that she loves him. This is enough to do the trick, and Bart is brought back into reality, and accepts Lisa’s apology. He’s happy that he’s escaped his strange coma reality, but also says that he saw visions of how everyone in town will die, which leads to a strange montage. We see Smithers commit suicide, Homer gets shot by Chief Wiggum over a sandwich, Marge marries Ned and then promptly dies, Skinner dies after seeing Chief Justice Bart fire fireworks, Skinner then runs Bart over with a scooter and kills him, Ralph is killed as a king, Lisa gains enlightenment, and Maggie evolves into some sort of star god.

This fucking episode. It’s baffling. I know that I’ve been very down on the show lately, and I’m really hoping that things perk up next season, but yikes was this a strange episode. It felt like a Treehouse of Horror episode, what with Bart pulling a Sixth Sense and seeing ghosts, but the way that they get to that plot makes no sense. The whole coma thing is so incredibly strange, and the idea that Lisa decides to torture her brother, WHO IS IN A COMA, is wildly bizarre. The idea of Bart dealing with ghosts would have made a decent but forgettable Treehouse of Horror segment, but by deciding to make it a regular episode they had to justify everything, and that just strained the credulity of the episode to an absurd degree. It’s just overly complicated, has a sour sense of humor, and just wasn’t funny. They tried to wring some emotion out of Bart and ghost Homer, and Lisa saying she loves Bart, but it’s all completely unearned, and just felt like the show going through the motions. I just really want this show to be better, but every episode on the back half of this season feels like a cry for help, signs that the show is officially untenable. I hope that next season is better. But I also hope that it’s the end of the show.

Take Away: Don’t mess with coma patients, regardless of your familial status.

“Flanders’ Ladder” was written by J Stewart Burns and directed by Matthew Nastuk, 2018.

Tagged as: 2018, Flanders' Ladder, Lifetime of Simpsons, Season 29, the Simpsons