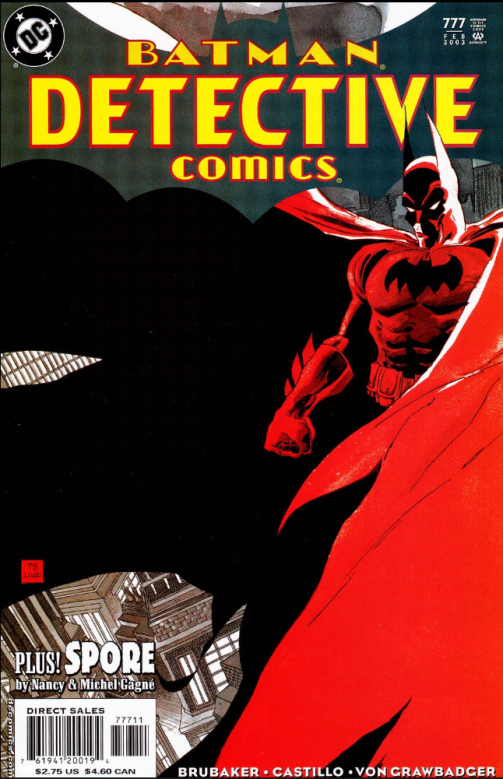 Hi there everyone, and welcome back to another installment of Bat Signal, my ongoing quest to read every issue of Detective Comics, in random order, and with essentially no context. Now, just a couple weeks ago I happened to pull an issue that was actually part of a longer, ongoing narrative. Which can be frustrating, since you end up not getting a fully formed story. And it seems like the random number generator gods have decided to test my patience once more again this week by handing out a story that has “part one” in the title. However, last time we had to talk about this I found myself dropped into the middle of a story that I really didn’t end up mustering much interest for. And this week I’m finding myself tempted to just go ahead and read the rest of the story, because this is one intriguing opening.

The story begins at Blackgate Penitentiary, the massive prison outside Gotham City that holds all the criminals who aren’t able to get an insanity plea and end up in Arkham Asylum. We’re then introduced to a man named Lenny Weinstein, a former henchman who is about to be released, and is already cooking up ideas for a scam to run when he gets out. So, when he’s released from the prison he meets up with a girlfriend named Tina, and the two of them head to an old safehouse that belonged to Lenny’s former employer. They get inside, and Lenny is able to find a spare suit belonging to the Killer Moth! If you aren’t familiar with him, Killer Moth is a supervillain who has a moth-themed super-suit which lets him fly, among other gadgets. So, Lenny’s the new Killer Moth? Well, for a couple days. Because we then cut straight to the police examining Lenny’s murdered corpse, having been shot in his new Killer Moth costume. Detectives Renee Montoya and Crispus Allen find themselves interviewing an old man named Charlie Tan who lives in the apartment complex that Lenny was killed at, and even was an eye-witness to the murder.

So, yeah, it looks like someone from Killer Moth’s past found Lenny, didn’t realize he was a new Killer Moth, and shot him. And, to make things more confounding, the old man says that the killer then leapt from the building, and disappeared. Allen and Montoya investigate the roof, and don’t seem to find any clues, until Batman shows up and starts belittling them. He notices a coin on the ground, near where the shooting must have taken place, and finds something odd about it. It’s a coin similar to the ones that Two Face uses, but both sides are marred, which goes against Harvey’s whole pathology. Plus, he’s currently locked up in Arkham.

Batman then takes a scan of the coin, and a picture of Lenny’s face, and heads out to begin investigating on his own. He send images of the coin to Barbara Gordon, who is operating as Oracle during this time period, for her to examine, and manages to find Lenny’s identity. It’s then a pretty simple task of finding people who visited Lenny at Blackgate to locate Tina, the girlfriend from earlier. So, Batman gets to her apartment, gives her the bad news, and asks if she has any information that could help him out. She doesn’t seem to, but at this point we cut over to the Iceberg Lounge, where the Penguin is getting a surprise visit from the Riddler. Turns out Riddler has heard about the murder, and through a source at the newspaper learned about the double-sided coin, which is giving him some worries. He intimates that he and Penguin know the identity of the killer, and if he’s right, they’re both in trouble. 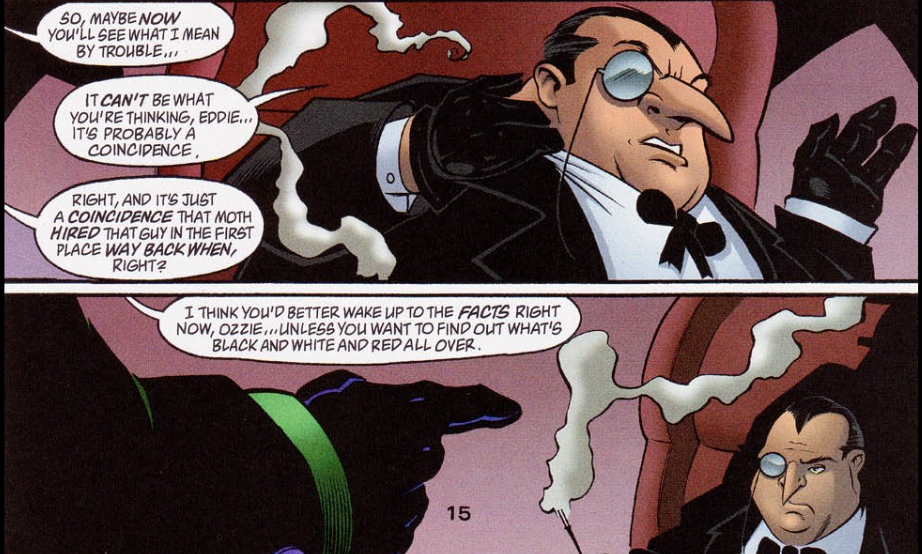 So yeah, it seems like Batman’s villains have been up to something that is getting them in serious trouble. But, we don’t get many more answers from this avenue this issue, instead we cut to the Batcave where Batman is conferencing with Oracle and going over what they do know. Oracle confirms that the coin doesn’t match the type or the marring that Two Face is known for, but it’s clear that someone is aping his style. Batman also learned from Tina that Lenny had been contacted by an old friend of his and told that if he could get the Killer Moth costume he could get a big score. So, with no other alternatives, Batman decides to track down Lenny’s “friends” who put him up to the Killer Mother gig.

Batman locates the criminals in a hideout after chasing the specific guy that Lenny was supposed to meet with, and starts beating the hell out of them. It’s a pretty one-sided fight, and Batman eventually allows the other criminals to just run away so that he can talk to Lenny’s friend and get some information. And he has some important info. Turns out he’d been approached by a man who was looking for Killer Moth. And, since this guy knew Lenny worked with Moth, and knew where a costume was, he decided to trick the man and have Lenny pretend to be the original Moth, not realizing that the mysterious man wanted to kill him. Oh, and all signs point to this mysterious man being the old guy who met with Montoya and Allen. So, Batman races to the old man’s apartment and finds it empty other than an old man mask. Batman then realizes that the man had called himself Charlie Tan, or charlatan, and figures out that they’ve been played. Oh, and the Penguin gets a scratched out coin in the mail, implying he may be the next victim of this charlatan.

This issue is a whole lot of fun. Which, shouldn’t have been a surprise to me, because it’s written by quite possibly my favorite comics writer of all time, Mr. Ed Brubaker. I love Brubaker’s writing, especially his crime stories, and I can’t believe I haven’t read any of his Detective Comics stuff before. Although it was great to see Renee and Crispus from the glorious Gotham Central run, quite possibly my favorite Batman series of all time, despite featuring very little Batman in it. And, like I said up top, it’s hard for me to want to stop here. I’ve given myself a very stupid set of rules for this project, but the odds of my getting the rest of this story anytime soon are pretty damn low. Because this seems like a lot of fun! It appears to be a story where a mystery killer is attacking various rogues because of some shady deal they had in the past, which is a great idea. I mean, we got to see Killer Mother, Riddler, and Penguin in this issue, I bet this story goes to all sorts of crazy places. It’s just a shame that I can’t talk about them today. But, what I do get to talk about is a story that I liked quite a bit. So that’s something, I suppose.