Hi there everyone, and welcome back to yet another installment of Bat Signal, my ongoing quest to read every issue of Detective Comics in random order and with essentially no context. And we have a very odd issue to discuss today, folks. Because this may the issue with the most Bruce Wayne I’ve ever read for this project. It’s a story that predominately takes place with Wayne as the primary character, not Batman. And, on top of all of that, this somehow became the most racist comic I’ve ever happened to pull as well! What a unique little synthesis of factors! This may be one of the weaker issues I’ve ever pulled, but we can get through it together.

The issue begins with Bruce Wayne sitting in his office in Wayne Tower, running a new program he’s devised called VIP. That stands for Victims, Inc. Program, which is terribly named, and is a side-project that Bruce is trying to get off the ground that will help out victims of crime in Gotham and get them training for jobs. It seems like a good idea, unfortunately it doesn’t seem to be going well. Because the issue begins with a very strange man bursting into Bruce’s office and sticking a gun in his face. The guy is kind of dressed up like a cowboy, with an eye-patch, and he seems dead-set on shooting Bruce in the face. But, Bruce keeps calm and politely asks his secretary to leave the room and let him defuse the situation. The man’s name is Dakota Jones, and he quickly makes it known that he’s half-American Indian, which leads him to spewing a whole bunch of problematic statements about his ethnicity.

Bruce and Jones wrestle around on the floor with Bruce easily fighting off the man, somehow not making Dakota Jones suspicious that this renowned layabout has fighting skills. Things get a little worrisome when Jones pulls out a huge Bowie knife, but Bruce is able to take him out, which somehow calms the man down enough that he’s willing to talk. So, the two sit down on Bruce’s office’s floor, and have a bit of a pow wow. Turns out Bruce knows who Dakota Jones is, he just couldn’t place the name when fighting the man off.

Dakota Jones used to be a pretty famous race-car driver, until tragedy recently struck. Jones participated in a race against a driver that was bankrolled by Bruce Wayne, and he was the favored driver. However, when Wayne’s driver and Jones were neck-and-neck, something smashed through Jone’s windshield and blinded him, causing him to crash his car and lose the race. And, when he received medical attention after the accident he found a bullet lodged in his eye. Someone shot him, and he assumes that Bruce Wayne was responsible for it, not wanting to have his driver lose to him. Jones was then reached out to by VIP and offered some training, but he interpreted that as Wayne gloating, and came to kill the man. Obviously Bruce had nothing to do with the incident, and promises to look into it for Jones. Bruce then suits up as Batman and heads out to investigate. He drives out to the racetrack where the accident happened, and starts looking for clues. He examines the part of the track where the gunshot must have happened, and realizes that the gunman must have been to the left of Jones, which could only point to either Bruce’s driver or someone in the middle of the track, which should be impossible. Bruce has known his driver, Soot Hanson, for quite some time, and can’t believe that the man could possible have had anything to do with shooting Dakota Jones.

Batman then heads out to the garage where Scoot’s car is kept, and begins poking around in it. And finds some incriminating details. Primarily the fact that there’s a discarded shell that’s the same caliber of the bullet that hit Jones. Batman’s aghast, figuring that Scoot must actually have been the gunman. Until he hears some sounds of men entering the garage. It’s a gangster named Chance Collins, and as he talks to some of his men Bruce figures out what happened. Collins apparently placed a lot of money on Scoot to win the race, and threatened Scoot into using a specially designed gun to shoot Jones. So, with an answer to his conundrum, Batman makes his presence known and starts fighting with Collins and his men.  He does pretty well, but manages to get outclassed by one of the goons who hits Batman with a cheap shot. Things look a little dire for the Dark Knight, until a tomahawk comes flying into the room, distracting everyone. Dakota Jones is here! And his appearance scares Collins enough that he hops in a car and tries to speed away. But, Jones is able to use Scoot’s car to run the gangster down, causing an accident. Collins seems to die in fiery explosion, but Batman seems cool with that. 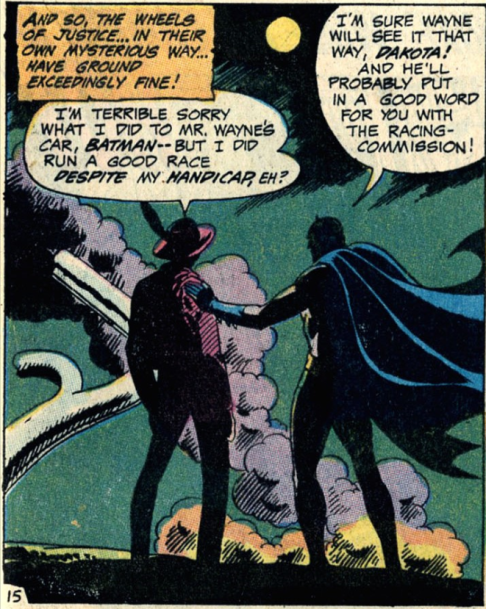 There’s a lot of weird things going on with this issue. On the one hand, there’s all the strange racism. As soon as it’s established that Dakota Jones is half-American Indian he and Bruce start tossing out as many stereotypes as possible, talking about peace-pipes and scalpings. I’ve read issues from the goddamn 30s that were less problematic than this issue. But I think the weirdest thing about this issue, and the thing that sticks in my mind the most, is how emblematic this issue is of this era of the book. Because this issue seems to have no idea what it’s doing. Things were changing, and it feels like the creators were still trying to figure out where things were going to go. Dick wasn’t Robin, having grown up enough to go to college, Bruce wasn’t living in Wayne Manor, instead living inside Wayne Tower, and there was a whole lot more Bruce Wayne than normal. This issue was just on the cusp of the era where Bruce Wayne essentially became Roger Moore’s James Bond, travelling around the world and getting into crazy shenanigans. But by this point things were still evolving. It’s not my favorite issue, but it’s very clearly just a book going through some growing pains.

“A Victim’s Victim!” was written by Frank Robbins, penciled by Bob Brown, inked by Joe Giella, and lettered by John Costanza, 1969.