Hello everyone, and welcome back to yet another installment of Bat Signal, my ongoing quest to read every issue of Detective Comics, in random order and with essentially no context. And that last little bit usually doesn’t come up too often. For the majority of the run of Detective Comics the book tended to do more self-contained stories, one and done tales that got in and got out without needing to spill over into multi-part storylines. But, every now and then, especially the closer to modern day I happen to pull, I end up getting stories that are just part of longer runs. Which can be a bit baffling, especially when my random number generator gives me an issue that happens to be the end of the story, without knowing the beginning. Like today! We get to see the last chapter of a three-part story, and struggle to figure out just what the hell is going on. But, it ends up working out better than you’d expect, especially when I pull a cover that has Batman brandishing a goddamn gun.

Now, like I said, this story is the third part of an ongoing narrative, which I think I mostly have figured out. But, it begins with Batman swooping in and attacking Deathstroke, who is setting up a sniper’s nest overlooking a cruise ship. For some reason Deathstroke is wearing an all-blue costume instead of his normal one, and he looks especially dorky. Deathstroke is able to spring into action though, and starts fighting Batman while they toss out what little exposition we get. Apparently there’s some sort of contest going on, and Deathstroke has been one of many assassins attempting to kill various rich people, and Deathstroke is one of the many killers who have shown up. In fact, Deathstroke has come out of retirement specifically to participate in the contest. But, he’s not really here to kill the rich people.

Yeah, Deathstroke is here because he has a personal grudge with another of the killers, a real dork called Gunhawk. I’ve never heard of Gunhawk, but he does not seem overly compelling, just a crazy guy with a bit of a death-wish who is only doing this assassination game thing in order to regain the respect of an equally homicidal former lover. And, as luck would have it, Gunhawk is already on the cruise boat that Deathstroke was scoping out, ready to gun down the rich guy he was told to kill, J Devlin Davenport. Unfortunately, because this is apparently not the first killing of rich folks two police officers are also on the boat, including Sarah Essen, before she married Commissioner Gordon. Which of course leads to a gun-fight which Davenport attempts to escape from.

Back up on the rooftops, Deathstroke has successfully beaten Batman down and has scurried off to set up another nest and snipe Davenport. Which is really getting Robin, Oracle, and Alfred worried. They aren’t quite sure if Batman will be able to take down Deathstroke. Batman refuses to let them help though, and chases after Deathstroke, while Oracle and Robin start digging into what this whole murder contest really is about. Deathstroke has already found another great spot to pick Davenport off from, and gets Davenport in his sights, only to have Batman show up again. And Batman is not willing to hold things back this time.

Meanwhile, things aren’t going great on the ship. Gunhawk and the two cops are currently engaged in a gun-fight, while Davenport has done the heroic thing and ran to the other end of the boat, before leaping straight into the bay to escape the gunfight. Gunhawk is a little put out when Davenport escapes, since killing him was part of a whole plan he had to earn back the affections of his psychotic ex-girlfriend. So, sensing that he has no other recourse, Gunhawk decides to just start firing indiscriminately at the police officers, figuring that he’d rather just die in a blaze of glory.

Which is troubling to Batman. He and Deathstroke have been wrestling around on the rooftops, Batman being unable to quite defeat the famed mercenary. Batman seems deadset on defeating Deathstroke, to the point where it appears he just wants to prove that he could beat him. And, after a drag-out fight, Batman finally does gain the upper hand. He defeats Deathstroke, and ties him up. But, he also realizes what’s going on with Gunhawk on the boat, and finds himself in a bit of a bind. Deathstroke starts to taunt him, saying that the only way that Batman could possibly stop him would be to pick up the sniper rifle and kill him. Batman obviously has a problem with that, but the longer he hesitates the further away the boat gets, and the less options there are. Until, quite to the surprise of Deathstroke, Batman picks up the rifle. And, using an almost forgotten skill, Batman uses the rife to shoot the guns right out of Gunhawk’s hands, letting the police arrest him. And, in the confusion, Deathstroke escapes. Oh, we also kind of figure out what’s been going on. Basically, some rich old guy is dying, and decided to put out some hits on some social rivals, so that he wouldn’t die before them. Neat. We do get to see Batman monologue about guns though. 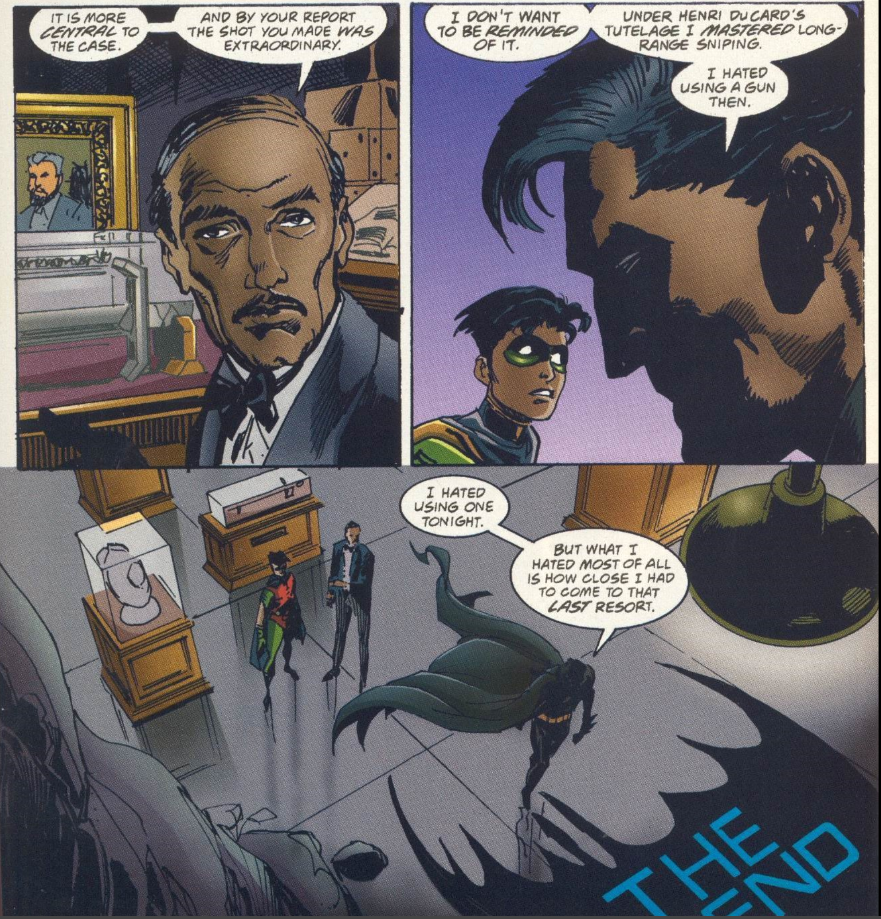 Okay, listen, it’s often really hard to deal with issues like this during the project. Pulling an incomplete story is usually difficult to discuss, since I’m not getting the full picture, and it often doesn’t make a whole bunch of sense. But, even with this constraint, I don’t think that this was that great of a story. By the end I understood what was going on, with the rich guy hiring a bunch of competing assassins just because he was an asshole. That didn’t end up being too interesting. And, really, neither was Gunhawk. They didn’t do a whole bunch with him in this story, but a crazy lovesick assassin is just such a tired trope. I guess the real draw is Deathstroke, a character that lots of people enjoy, but I’ve never really gotten into. He’s kind of the peak of late-eighties early-nineties absurdity to me, just a remorseless killer with very little depth who is more defined by gimmicks than character traits. That may be an unfair assessment, because I honestly haven’t read a good amount of stories featuring the guy, but what little I have read, including this story, do little to dissuade me of those preconceived notions. Just kind of a swing and a miss, folks. But there’s always next week!

“Heart of Ice” was written by Chuck Dixon, penciled by Garham Nolan, inked by Bill Sienkiewicz, colored by Gloria Vasquez and lettered by John Costanza, 1997.