Salutations everyone, and welcome back to yet another installment of Bat Signal, my ongoing quest to read every issue of Detective Comics ever published, in random order, and with essentially no context. And we have a very 50s issue to talk about today, folks. There was certainly a period of Detective Comics that had a very standard formula, with Batman screwing around with one-and-done villains before rapidly wrapping everything up. Yeah, there’s no random treks into the vast untamed wilderness outside Gotham in this one, but we do get to see Batman practicing stage magic. That’s right, it’s often a crapshoot when it comes to the covers of these older issues actually having anything to do with the story inside, but we do get to see Batman perform magic. Get ready.

The story begins when a group of gangsters rush eagerly into the office of their boss, who is never given a name in the story for some reason, ready to talk about their latest plan to rob an armored bank truck. But, when they get inside his office they find something a little out of the ordinary. The Boss is trapped in his chair, a pair of over-sized manacles attached to his wrists. He explains that early in the morning a rival gang burst into his office and places the manacles around him, which were specially made by a chemist. They have a high-powered explosive in them that will go off if anyone tampers with them, and if any vibration occurs near them. He’s trapped, and has no idea how to save himself. Until he notices a billboard outside his office advertising a special charity performance for a renowned magician named Merko. So, figuring that an escape artist could get the manacles off without triggering the explosives, the Boss sends his goons to abduct Merko at his show that night. And, as you might have expected, there are a pair of auspicious guests at this performance. 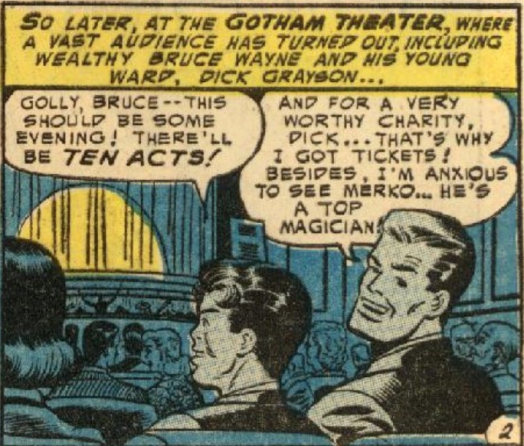 Bruce Wayne and Dick Grayson are eager to watch Merko’s performance, and end up quite pleased with it. However, after Merko finishes his performance, but before he makes it into the wings, a trap door opens up below him, and he’s abducted by the gangsters. No one spots the kidnapping, but Bruce and Dick start to get suspicious when Merko doesn’t come out for a standing ovation, and suit up as Batman and Robin. They barrel backstage only to find the people putting the show on just as confused as they are. They have no idea where Merko could have gone, and the Dynamic Duo begin investigating. They quickly come across the trapdoor and jump down to check it out. They quickly realize that Merko and the people who abducted him are long gone, which means they have a different problem to deal with. If Merko doesn’t perform his show over the next couple days the charity even will be ruined.

Meanwhile, Merko has been brought to meet with the Boss, and commanded to free him. Merko pretty quickly realizes that he’ll be able to crack the manacles, but also realizes that he shouldn’t help this gangster. So, he pretends that this is the most difficult lock he’s ever seen, and stalls. Unfortunately he’s not going to be getting help anytime soon, because Batman has decided that the best way to deal with Merko’s absence is to have Bruce wear makeup and pretend to be Merko, and perform for him during the coming shows. Methinks Bruce just wants to be a magician. So, Bruce begins performing as Merko, while using Dick as his audience volunteer each night while the comic breaks the magician’s code and reveals how a variety of stage tricks are actually pulled off. 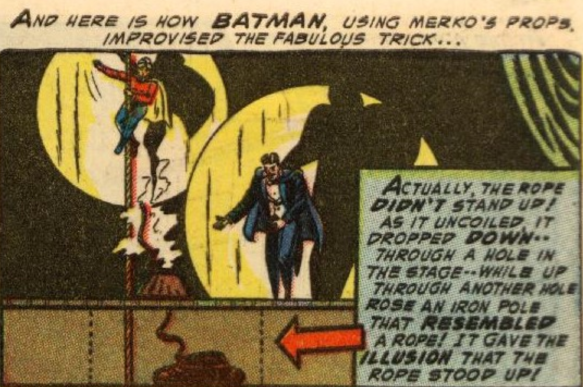 And, while Batman is living out a latent fantasy, the Boss is continuing along with his business, ordering his men over a phone. He has them use a wrecking-ball to knock over the armored truck before robbing it as it drives past a construction field. But, as luck would have it, Batman and Robin actually were passing by at the moment, and are able to see the crime taking place. But, the stop to save the drivers of the truck and watch as the gangsters flee. They can’t give chase, since they have a show to get to. They go back to the theater and continue putting on the show, which ends up drawing the attention of the Boss.  Because the next day one of his underlings brings in a newspaper about the Great Merko’s latest triumph, which confuses them, since they have Merko in their possession. So, the Boss orders his men to go to the theater that night and kill whoever is impersonating Merko, because he figures the only logical explanation is that this person is Batman.

So, that night as Batman is performing an elaborate stunt involving a live elephant, the gangsters arrive to kill him. They wait until everyone is applauding the successful trick and then just start firing their guns off, spooking the elephant. In the confusion Batman and Robin are able to scare the goons, having them race off. They get ready to escape back to their hideout, but are apparently some of the most incompetent goons I’ve ever seen, because Batman and Robin are able to hop onto the roof of their car and ride the whole way to the hideout without them realizing. Once there they beat the goons up, and get into the Boss’ office. Merko is then freed, and Batman even rubs salt in the Boss’ wound by explaining that there never was any explosive in his manacles, because if there had been his phone would have triggered it. His rivals were just screwing with him.

This isn’t exactly the best issue of Detective Comics I’ve ever read, but it’s certainly an enjoyable one. It’s just so damn ridiculous. The idea of a gangster kidnapping a magician in order to force him to help save his life is actually a really fun premise, and one that I think could have worked really well. But, it’s hampered somewhat by having Batman’s immediate reaction be “well, I guess I have to be a magician now,” instead of him trying to find said magician. Yeah, it does lead to this issue being a whole lot of fun, with Batman not so subtly ignoring his duties to have fun being a magician, but it doesn’t really make a whole lot of sense. The Boss is not exactly an intelligent man, but he’s in good company, because basically every character in this story, from the titular heroes down to the random idiots who work for the Boss are all acting like complete morons in this story. Which is somehow endearing to me. It’s not a very brilliant story, but it’s certainly enjoyable, although maybe not exactly in the way that was intended.

“Batman the Magician” was written by Bill Finger, penciled by Sheldon Moldoff, and inked by Charles Paris, 1954.