Jessica Jones and the Great Responsibility

Folks, it’s time to take another journey back into the hallway-filled world of Marvel Netflix! Now, I know there’s a lot of animosity for these shows on the internet. People say they’re too long, they have serious pacing issues, they spend an inordinate amount of time on side-characters, and they’re just generally too removed from the larger Marvel Cinematic Universe. And, I suppose some of those are fair. The series’ haven’t been perfect. And yet, I’ve enjoyed them all, at least to some extent. Iron Fist pushes it. But, by and large, I’ve been a serious mark for these Marvel Netflix shows, and they’ve been providing me with a specific type of superhero story that just isn’t happening in any other sort of adaptation. These are some of my favorite characters being told in gritty, street-level ways that lend themselves to some very interesting storytelling. And, I think the show that took that opportunity and ran with it the most had to be the series that ended up the most lauded of the bunch. Jessica Jones probably seemed like the biggest gamble of the entire Marvel Netflix project, since she was the newest character, the one with the least amount of recognition, and thanks to the old and flagrantly false idea that people don’t want to see female superheroes. And yet, it ended up really blowing people away, telling a different kind of superhero story that managed to be a lot of fun while also tackling some incredibly heavy topics for the genre. We looked at abuse, PTSD, and rape-culture, all things that you normally wouldn’t think would be brought up in a show about someone with superpowers who fights crime. Well, in her own way at least.

But, Jessica Jones was a huge hit, and the character of Jessica ended up becoming a fan-favorite, providing some much needed detached irony in the culmination of the various shows in last year’s the Defenders. So, people have been eager to see what Jessica Jones would do in a second season. They’d broken ground in the first season, and the character had really been through a lot by the time that the Defenders ended, so it seems like there was a lot of pressure on this second season to deliver. And, in my opinion, it succeeded. Was it as deep and powerful  a season of television as the first season was? Well, maybe not. But, that doesn’t mean it was a slouch either. It took the groundwork laid in the first season and sprung into some very interesting places. It bucked expectations and ended up becoming something very different than what I assume most people were anticipating, while somehow becoming even more personal than the first season was, telling a story that certainly feels alien when compared to the other shows in this larger franchise, while remaining possibly the most engaging of the bunch. 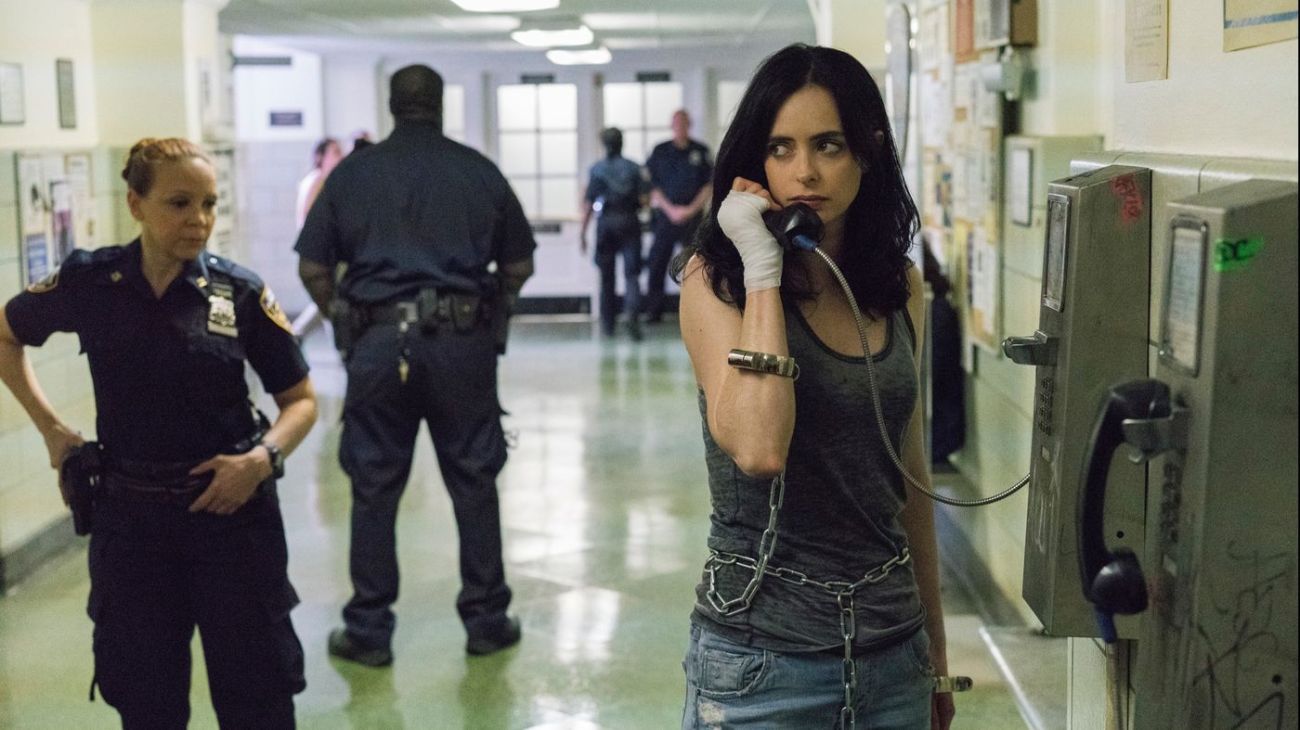 This season picks up some time after the Defenders, with Jessica still struggling to figure out how to handle her life. She’s saved New York City from the Hand, but it hasn’t really changed a whole lot for her. She’s back on her own, taking small cases that come her way at Alias Investigation, just trying to keep her head down and not get drawn into any more city-wide fights against evil. Which is kind of driving her two closest friends crazy. Trish Walker, her surrogate sister and best friend, and Malcolm Ducasse, her neighbor and somewhat unwanted assistant, both assume that Jessica should be doing more. They think that now is the time for her to put aside all of her previous issues with superheroics and throw herself fully into helping as many people as possible. Which she has no interest in doing. Trish specifically is baffled by the fact that Jessica shows no interest in helping people, especially when she starts to come across people who claim that they were experimented on by the same mysterious organization that gave Jessica her powers, IGH. Jessica has no interest in poking around in her past, until she meets a paranoid man who claims to have speed-powers, only to objectively prove that he does. And, just as she starts to get interested in this seemingly evil group that’s giving people unwanted superpowers, the speedster is murdered by a super-powered assassin, making Jessica realize that someone doesn’t want her to get to the truth.

Jessica, Trish, and Malcolm begin investigating IGH, and things quickly start to get concerning. They find a strung-out former nurse who worked there, and who confirms all of the evil things they were up to, and they continue to find more people who have been killed by this assassin. And, surprisingly, Jessica finally tracks down the assassin and finds that it’s a middle-aged woman. Jessica continues to investigate the assassin, and eventually finds her with a scientist named Karl Malus who was integral in IGH. Jessica keeps looking into them, and eventually gets in contact with Malus and the woman, whose name is Alisa. And things get complicated. It turns out that Alisa is Jessica’s mother. She survived the accident that created Jessica, but was in much worse condition. Malus helped bring Alisa back to a functioning person, in a process that took years, and the two eventually fell in love. But, when Alisa started to see Jessica and Trish investigating IGH she became worried that she and Karl were going to be exposed, and started trying to cut all of the loose threads that could lead back to them. Jessica becomes incredibly conflicted with this revelation, and begins trying to find a way to rehabilitate her mother, to get her family back. Meanwhile, Trish has become addicted to a drug she’s found that gives her heightened abilities, and now that she knows the truth about Malus becomes obsessed with the idea of having him perform the procedure on her, giving her superpowers. She actually does get the procedure done, before Jessica can stop her, and in the process sets off a chain of events that gets Karl killed. Alisa then becomes incredibly unstable, vacillating between wanting to be a mother-daughter crime-fighting team and wanting to kill everyone around her. Jessica has no idea what to do with this burden that’s been thrust upon her, and that question is taken out of her hands when Trish ends up killing Alisa, thinking that that’s what Jessica wanted. So, Jessica has lost her family for a second time, she’s successfully pushed Malcolm out of her life, and now thinks of Trish as the person who killed her mother, leaving her even more broken and alone than ever before.

The second season of Jessica Jones had a lot to live up to. The first season was lauded as one of the finest examples of superhero fiction from this modern wave of choices. It took the superhero genre and used it to explore things like PTSD, trauma, and depression. So, does this season meet the expectations of the first season? Well, yes and no. By and large, I think that this was a very good season of television. It took the characters in interesting directions, and continued to buck expectation and do very new and different things with the superhero format. Yeah, it doesn’t have anywhere near as compelling a villain as the first season’s Killgrave, but it kind of didn’t need one. This wasn’t a story about a hero overcomming a villain, it was about a person confronting her past. And it succeeded at that. Kristen Ritter continues to be terrific as Jessica, and the psychological journey that she goes on in this season is truly fascinating. It’s a compelling story that’s very well handled. Which is good, because a lot of the rest of the show feels like wheel-spinning at time. Trish’s obsessive decline throughout the series is well-done, but most of the other side-plots are ultimately not needed. We see a whole lot about Jerri Hogarth, the lawyer that helps Jessica out from time to time, and while it is occasionally interesting, it’s largely unnecessary to anything else that’s going on. Similarly, a lot of what Malcolm goes through does end up being too important. It’s all nice, and well-acted, but it doesn’t help disprove the complain that these Marvel stories suffer from pacing issues and wouldn’t be better if they were just a tad tighter.

But, none of those superfluous side-plots hamper what really is a strong central storyline. There’s a lot to this story, especially revolving around the idea of family, both biological and the one you build for yourself over your life. Specifically, this season has a lot of say about the relationship between mothers and daughters. Which is not something I’m exactly qualified to talk about.

There was one through-line in this season though that kept poking up, and really intrigued me. The idea of being called to heroism. Now, the show flat out quotes Uncle Ben, derisively, near the end of the season, but a major part of this season does seem to revolve around the idea that “With Great Power Comes Great Responsibility.” From the very beginning of the season everyone in Jessica’s life is telling her that she has the ability to help people, and should therefore do this. It’s selfish to do otherwise. Trish in particular is fixated on this idea, to the point that she turns herself into a monster to give her the ability to be strong enough to help people. All because she doesn’t accept the fact that she doesn’t need superpowers to be a good person. She’s convinced that the key to being a hero would to literally have powers to put her above everyone else, instead of just using the power she does have, a successful radio show, and use that for good. Jessica knows that she has the power to become a legitimate superhero, but also accepts the fact that she wouldn’t be good at it. It doesn’t necessarily make her a bad person because she doesn’t want to be a superhero. She’s found a way to help people, to put good into the world, even if on some days she doesn’t quite make that balance work. Jessica has spent her adult life learning the same lesson, that her powers are a bit of a curse. Whenever she does try to use them, people get hurt and things get worse. But, at the same time, she also learns that just shutting herself out and refusing to do any good will put her down a dark path. By the end of the series she seems to realize that she needs to find a middle ground. She may not be able to be a superhero, but she also could put some goodness into the world. Which is all you can ask for sometimes.

Jessica Jones was created and showran by Melissa Rosenberg and released by Netflix, 2018.