Rampage and the Scientific Boogeyman 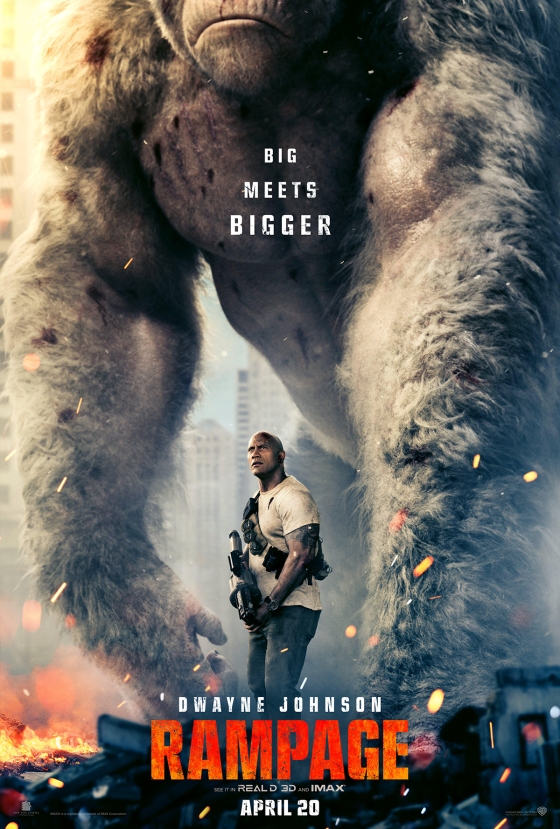 The career of Dwayne “the Rock” Johnson has been utterly fascinating. I enjoyed wrestling when I was a kid, but had fallen off the whole WWE thing by the time that the Rock was a going concern, so I didn’t know much at all about him from that era of his career, other than just the basic knowledge that he was a popular wrestler. But then the guy started showing up in movies. Not good movies, but he was a wrestler, what did you expect? He made cheesy action flicks. But then something strange started to happen. The Rock started showing up all over the place. And he started to be a lot of fun. Dwayne Johnson has a seemingly endless source of charisma, which I guess makes sense since he was such a successful wrestler. It can’t be easy to make all of that melodramatic nonsense seem at least somewhat believable. The quality of his movies didn’t always go up, but they were at least enjoyable. Hell, it reached the point where failing franchises would just toss the Rock in, figuring that that would be enough to deal with sagging ticket sales. It’s when he started referring to himself as “franchise Viagra.” And things have now reached the point where Dwayne Johnson seems to be the hardest working man in show-business. He’s cranking out movies at a frankly shocking rate, to the point where you almost have to start worrying about his financial situation. Some of the films have been a lot of fun, he seems to have really hit his stride with these campy and pulpy adventures he’s been a part of. Other times we get a film like the one we’ll be discussing today, Rampage. It’s the second movie based on a video game I’ve seen this year, and it sure does confirm that idea that they haven’t made a decent video game movie yet.

Rampage begins on what is apparently a private space station owned by a nefarious company called Energyne that’s owned by a pair of siblings with no morals. They’ve created some sort of genetic editing virus and are experimenting on it in space, which becomes a problem when the experiment goes wrong and the space station burns up on reentry. It ends up firing three canisters of the virus down into America. One lands in the Everglades and is eaten by a crocodile, another lands in Wyoming and sprays its contents on a wolf, and the third lands in a San Diego nature preserve where it contaminates an albino gorilla named George. George’s handler, a man called Davis Okoye, is called in when George starts to rapidly grow in size. And aggression. George’s changes become pretty big news, and Davis is introduced to a woman named Dr. Kate Caldwell. She’s the scientist who created this genetic editing virus, with altruistic purposes, and she thinks that Energyne has taken her research to make monsters. For reasons that are never made clear. Caldwell claims that she can cure George, but before she can make good on that promise she, Davis, and George are all abducted by a mysterious government agent named Harvey Russell. Russell has orders to capture George and study him, and has also been put on the case to track down the wolf who was infected, and who has now become a giant monster.

But, the Wyden siblings, owners of Energyne, decide that they need one of the monsters, dead or alive, so they activate a high-powered radio beacon atop their skyscraper in Chicago, which will draw George and the wolf towards them. And, unbeknownst to them, the crocodile. They assume the monsters will get there, kill each other, and they can get the virus out of their corpses. The signal activates, and George, the wolf, and the crocodile begin heading toward Chicago, even though that results in Davis, Caldwell, and Russell being involved in a plane crash when George escapes. The military decides that they’re going to have to kill all three of the monsters, but Caldwell is convinced that there’s a cure inside Energyne that will let them stop the monsters. Plus, when the military actually does try to engage George and the wolf, they’re pretty inefficient. So, Davis and Caldwell escape military custody and make their way to Chicago right as the monsters begins destroying the city, and most of Energyne. They get into the building, and into Caldwell’s old laboratory, and find a serum that should make it so that the monsters will lose their unnatural aggression. And, by feeding one of the Wyden’s to George while she held the serum, they’re able to get George on their side. Davis and George then begin fighting the wolf and the crocodile while the military prepares to blow Chicago up, rather than let the monsters continue attacking the country. The two succeed, the monsters are killed, the Wyden’s are exposed, and George gets to continue living his life as a massive gorilla.

This is an incredibly stupid movie. And, it’s kind of hard to see how it wouldn’t have been. Its about some transparently evil businesspeople infecting random animals with a disease that makes them uncontrollable rage-monsters who then destroy Chicago while the Rock tries to stop them. That was always going to be absurd. The problem is, it never became the right kind of absurd. The film is surprisingly serious, with little in the way of camp humor, playing the film far too straight to work. Jeffrey Dean Morgan is pretty great as the insane cowboy government agent Russell, but he’s acting in a completely different movie from everyone else. Dwayne Johnson and Naomie Harris are playing things far too normally, giving the film a weird sense of drama that it never lives up to. If everyone had been on the level that Jeffrey Dean Morgan was I think this movie could have worked. Or, at least, been more fun. As it stands, it’s just kind of a slog. It’s too long, and we really only get to see monsters fighting in the last twenty minutes. The rest is just a meandering plot that ultimately just served to explain why they’re fighting, something that could have been whittled down far more efficiently. This was always going to be a dumb movie, but by dragging it out, adding in unearned drama, and taking very peculiar shots at real-world scientific breakthroughs, the film just kind of lands on its face.

But it’s that last part that really confused me. I’ve never played a Rampage game, but some cursory Googling tells me that in the game the three monsters were all brought about by outlandish sci-fi technology, the sort of things most giant monsters derive from. And this film certainly has its fair share of outlandish nonsense. But, it all comes from a strangely specific kernel of truth. The very beginning of the film, and several times throughout, they mention that the genetic editing is from a procedure known as CRISPR. This is a real process, and one that has the potential to enact huge change in human history. It’s being used to fight disease, and generally help human beings. But this film namechecks it as an evil thing that creates monsters. It’s strange. But, not completely without precedent. For whatever reason, lots of films take scientific progress and cast it in a light of evil. Human beings are afraid of what we don’t understand, and cutting edge science is often something that the vast majority of people don’t understand. So, I suppose that’s why Hollywood isn’t afraid to take something that was maybe featured in an article somewhere, and make it the MacGuffin to explain away their evil monsters. But it just feels strange. There’s a good chance that people seeing this dumb movie will learn about CRISPR for the first time, and it’ll be in the context of it being a bad thing that made killer monsters. Which doesn’t seem good. Taking science and making it the boogeyman for a stupid monster movie just seems a little foolish, but who knows. I’m sure people aren’t going to remember this movie in a month anyway.