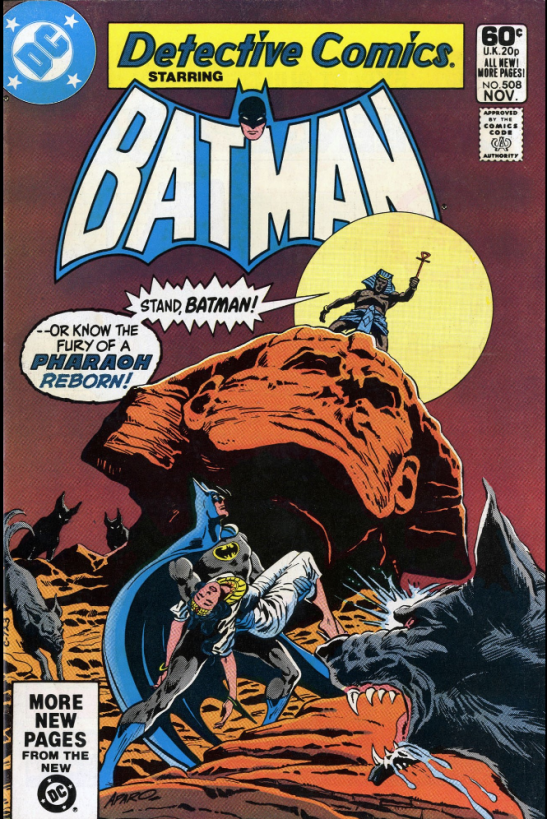 Hello everyone, and welcome back to yet another installment of Bat Signal, my ongoing quest to read every issue of Detective Comics, in random order, and with basically no context. And, I know I say this a lot, but we have a very fun issue of comics to discuss today, folks. People who have been reading this project for a long time may know that one of my favorite issues of Detective Comics I’ve ever happened to pull was an absolutely insane story where Batman and Robin traveled back in time to ancient Egypt through the power of time-travelling hypnotism! It’s an absolute delight of Golden Age weirdness, and as soon as I saw the cover for the issue I happened to pull today I got excited. But, if there’s one thing that I’ve learned over the years I’ve been doing this project, it’s that you can rarely trust the covers of Detective Comics to deliver on the insane things they promise. And yet, while we don’t get any time-travelling hypnosis in this issue, we do get a delightful story from that era of Batman comics when Bruce Wayne was basically just James Bond. Let’s go!

The issue begins with Batman stalking through the streets of Gotham City, worried about Selina Kyle. He’s apparently been trying to contact her all day, and has become worried that something may be amiss. So, Bruce suits up and breaks into Selina’s apartment, hoping to see what’s going on. And it doesn’t look good! Her apartment has been ransacked and there’s no sign of Selina anywhere. So, Batman does some sleuthing, and comes across the only clue in the entire apartment, a small pile of peculiar dust in the middle of the room. He scoops it up and brings the dust, along with all of Selina’s hungry cats, back to the Batcave to analyze it. And he makes a very strange discovery. The dust appears to be from mummies. Seems like kind of specious reasoning, but he is the World’s Greatest Detective.

Luckily, Bruce Wayne does know a renowned Egyptologist in Gotham, a man named Dr. Gregory Griffin. So, he heads over to the Gotham Museum to get Griffin’s advice, only to find something distressing. Griffin is missing, and his assistant has no idea where he could be. And, after checking his office, they find that it has been ransacked in a similar fashion to Selina’s apartment. Bruce worries that these abductions may be related, so he investigate the office, and finds something surprising. A secret room that has been turned into an Egyptian tomb. And, to make matters weirder, there’s also a picture of Selina hung up. But, Griffin’s assistant is able to shine a bit of light on that. Apparently Selina is the spitting image of the death mask of an Egyptian queen known as Kara. She was wed to the pharaoh Khafre, the man whom the Sphinx of Giza was created for. Apparently Griffin has been obsessed with both Khafre and Kara, and now it looks like he may have gone off the deep end and kidnapped Selina since she looks like Kara.

Bruce assumes that this must mean that Griffin has taken Selina to Egypt, so he hops on a plane and heads out to the Nile. Bruce is able to schmooze with a local police officer when he gets to Giza, and does confirm that people matching the description of Griffin and Selina arrives recently, and then begins his own investigating. He heads over to the pyramids and Sphinx of Giza, and finds a place to hide out for the rest of the day. When night finally falls Bruce slips into his Batman costume and begins examining the Sphinx. But, when he gets too close to the Sphinx, he finds something strange. A whole pack of angry jackals show up, ready to rip Batman to shreds. He does his best to fight off the jackals, but it becomes clear that he’s not going to be able to succeed in doing this, and he ends up scurrying up the Sphinx to hide. And, while he’s up there, he ends up finding something very strange. A secret passage! He climbs into the passage and ends up finding a hidden crypt inside the Sphinx that no one knew existed. And inside that crypt?

Batman races into the crypt, eager to save Selina from whatever weirdness she’s found herself in, only to stumble across Griffin, who is dressed in a stereotypical Pharaoh costume. He’s now calling himself Khafre, and he’s wielding a strange amulet and a scepter. Batman tries to talk some sense into Griffin, but he’s convinced that he’s actually the Pharaoh Khafre, and uses the strange scepter to attack Batman, since it can somehow fire jets of flame out of it. Batman does a good job dodging the flames, but ends up realizing that he’s in a confined room full of flamable mummies, and decides that maybe playing around with fire isn’t a good idea. So, he stands down and allows Khafre to subdue him. Which takes the form of wrapping Batman up like a mummy, but with his cowl still exposed.

But, once Batman is wrapped up, Khafre explains what his plan really revolves around. He’s found some sort of herb that when burned will slowly kill everyone in the room, letting him, Selina, and their servant Batman go to the afterlife. Batman’s obviously not a fan of this plan, and when Khafre begins burning the herb, Batman springs into action. He rips through his wrappings, using a Houdini escape technique, and begins battling the Pharaoh. Bruce is able to get the best of him, grabs Selina, and flees from the Sphinx. Unfortunately, when he gets there he finds that the jackals are still there, because that medallion Khafre had apparently was able to control jackals. And, in the time it takes for Batman to be worried about the jackals, Khafre catches up with them, and pushes Batman out into the desert. Batman drags Khafre along with him, and the two men end up falling off of the Sphinx and into the path of the jackals. But, while falling Khafre drops the medallion, which makes it so the jackals have no problem attacking him and tearing him apart. Batman ignores the grisly scene, and carries Selina away to safety so they can talk about their relationship.

This is a wonderfully silly issue of comics. I really do love this era of Batman, where Bruce Wayne would just jetset around the world and solve crazy crimes. So, taking that structure and adding in a plot that honestly wouldn’t feel out of place in a wacky Golden Age story was a great little synthesis. The idea of a professor becoming fixated on a Pharaoh to the point where he starts thinking that he actually is the Pharaoh is such a silly concept for a story from the eighties. Hell, it’s basically the premise of King Tut from the 60’s Batman series. It’s all just so wonderfully weird, and made even weirder by the fact that I think there’s legitimate magic in this story? Batman had an assumption that the flame-spewing scepter was actually a solar-powered weapon, but Khafre then explains that he found it in the tomb, so I guess it was actually real. Oh, and then there was the jackal-controlling medallion. Batman just kind of glazes over all of that, and focuses on saving Catwoman, but I think they found legitimate ancient magic in this issue. Which is just so fantastically odd. Just like the rest of this wacky story.

“Secret of the Sphinx Sinister” was written by Gerry Conway, penciled by Don Newton, inked by Dan Adkins, colored by Adrienne Roy, and lettered by Ben Oda, 1981.