Hi there everyone, and welcome back to another installment of Bat Signal, my ongoing quest to read every issue of Detective Comics, in random order and with basically no context. And we have a pretty fun little story to talk about today, folks. It seems strange, but even though I’ve been doing this project for just over two years, but this is only the second time that I’ve happened to pull a real Catwoman story. Yeah, there was a time where she was working with Batman, but I’ve only ever seen one other tale involving the Princess of Plunder. And, it’s a really fun one, even though it does offer some confusing insight into Gotham City and its landmarks. Catwoman has really gotten a lot of play in the recent Batman run, which has been terrific, so it’s nice to finally get another chance to see her history.

The story begins in whatever prison is currently holding Selina Kyle, the Catwoman. Well, not for long, because as soon as we see her in prison we also see her putting on some special gloves that let her scale walls, which allows her to hop right out of the prison and back into her life of crime. And once she gets back in league with some goons she comes up with a little scam to get back into the swing of things. She decides to blackmail three industrial businessmen in Gotham, telling them that if they don’t pay her $50,000 she’s going to have a “black cat” cause them bad luck. She sends the letters out to John Ross a fur magnate, Sam Slade a circus owner, and Bill Drew a ship owner. But, none of them take the threat seriously, so Catwoman decides to get her revenge on John Ross. Because that day he’s flying back to Gotham with a plane-full of fur, and she has a plan up her sleeve. She has a black caterpillar truck waiting in the airport, and when Ross’ plane comes in for a landing the truck drags a zeppelin out of a hangar, causing a crash. And, with the plane crashed, she and her men are able to steal with furs. While Batman and Robin watch on.

They assumed that Catwoman would be up to some sort of shenanigans, and as soon as they see the blimp explosion they realize they were right. So, they speed towards the accident in the Batmobile, only to get into a speeding chase with Catwoman and her goons who have their own Catmobile. Things seem to be going pretty well, until they reach a dead-end, and Catwoman’s car is able to leap over a gap in the road, leaving the Dynamic Duo in her dust. And, sensing that one heist isn’t going to be enough for her, they get ready to track down Catwoman’s next victim, who they assume will be Sam Slade, the circus owner.

Slade isn’t very worried about the threat though, saying that he’s not a superstitious man. Apparently he didn’t hear about the blimp explosion. And this is going to come back to bit him in the ass, because Catwoman really does have a plan to take down Slade, and it involves releasing a black panther into the circus to attack the audience. Luckily for them though, Batman and Robin took the threat seriously, and were waiting up on some trapeze bars, which you’d think would be triggering some serious PTSD for Robin, but whatever. They swing down and manage to subdue the panther before it can kill anyone, thus foiling Catwoman, who still manages to escape their clutches. Which means there’s only one last possible victim. Bill Drew, the shipping magnate. So, Batman and Robin get aboard Drew’s ship, and wait for whatever scheme Catwoman has in store for them while sitting in Gotham harbor, which has a rather strange addition to it. 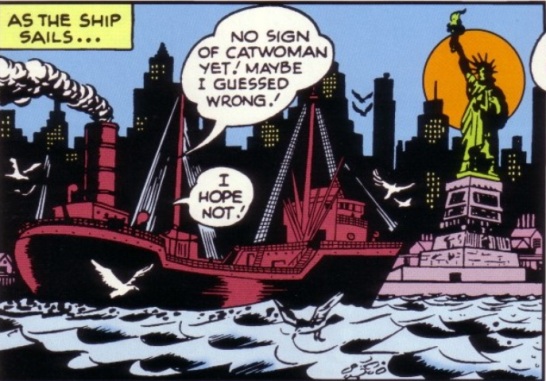 Yeah, for some reason the Statue of Liberty is in Gotham. And it’s going to come into play in just a bit, because right as the ship starts sailing into the harbor they accidentally smash into a small fishing boat. They cast down some ropes to save the fishermen, and drag them up onto the ship. But, as you may have guessed, it’s a scam. The “fishermen” were actually Catwoman and her men, who then take the crew hostage. They just weren’t expecting Batman and Robin also being on the ship, which leads to a brief fight. The goons are knocked out pretty easily, but Catwoman bails off the ship and swims toward the Statue. So, Batman and Robin follow, and are suddenly put in the position of chasing Catwoman up through the statue, struggling to catch up with her and her climbing gloves.

Catwoman, sensing that they’re closing in on her, tosses a loose brick (what?) at Batman, knocking the Caped Crusader out for a moment. So, Robin goes on alone, and almost immediately is captured by Catwoman, who has a helicopter waiting for her at the top of the Statue. She flies off with Robin, and Batman begins trying to track them down. Luckily, when Robin is taken back to Catwoman’s base he’s able to get a hold of his radio, and he calls Batman, giving him enough hints to track down to only possible location of Catwoman’s hideout. Robin then pesters Catwoman a bit, implying that she’s in love with Batman, so that she’ll be thrown off her game when Batman arrives to save his partner. Batman’s able to knock out Catwoman’s goons, but she’s able to slip away, and drives off in her Catmobile. Batman and Robin give chase, but she manages to escape, launching off a bridge. Batman’s not sure if she survived or not, but decides to give up the chase.

This issue is very fun. It’s one of those stories where there actually isn’t much detection, instead just featuring the Dynamic Duo racing around, always one step behind the villain of the week. I feel like these types of stories can often feel a little tiring when they feature villains who are just one-off gangsters, but it’s certainly spiced up when one of Batman’s classic rogues are tossed in. Especially someone like Catwoman, who is a really fun character. I really love this design for the character, despite how incredibly inconvenient performing heists in a ballgown would be. Plus, that Catmobile thing is great. I love how many of these old villains had their own Batmobiles. There’s really not much to the story, just some fun superheroics, some baffling information about the sights of Gotham City, and a bunch of crazy car-chases, which is sometimes all I need in a Batman story.

“The Black Cat Crimes” was written by Bill Finger, penciled by Bob Kane, and inked by Charles Paris, 1947.