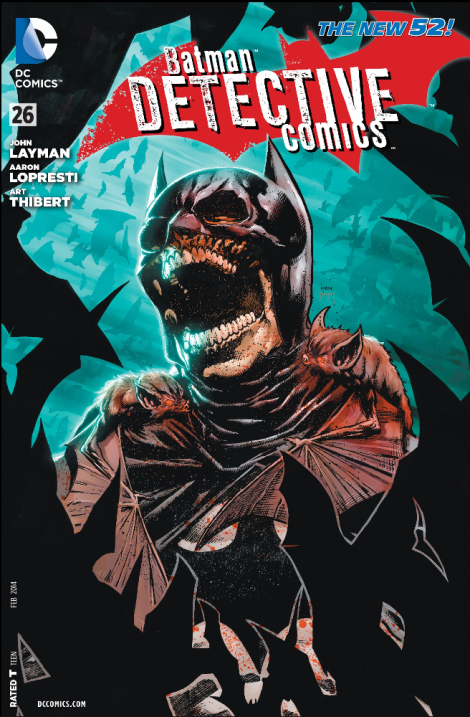 Hello everyone, and welcome back to another installment of Bat Signal, my ongoing quest to read every issue of Detective Comics in random order, and with very little context. We’re taking a trip back into the New 52 today to talk about a rather decent little stand-alone story, something that really wasn’t too common from this era of Detective. And it’s all about our good friend Kirk Langstrom, the Man-Bat! The New 52 wasn’t exactly my favorite era of comics, and Detective Comics in particular didn’t really do a whole lot for me, but I am intrigued by the run written by John Layman, a writer who I’m primarily familiar with in regards to his wonderful series Chew, and who I feel could make a great fit for Batman, Especially if this issue is a good sample of his work on the book.

The story begins with a group of drunken Gotham teens wandering around the woods one night, coming across a small cave. The leader of the group takes them inside, telling them that this is a very special bat cave. Not the Bat Cave obviously, but he claims that it used to be home to a very special species of bats that have gone extinct. The other kids aren’t overly interested, but they do notice that there are an alarming amount of human bones in the cave. These kids are never seen from again. The next day Batman is called in to help Gordon investigate, because the kids have been reduced to bones, and no one has any idea how. And it’s not an isolated incident. There’s been a rash of people dying and being stripped to their bones, and it just isn’t making sense. But, there is a pretty promising lead.

Yep, Kirk Langstrom, the Man-Bat, was sighted at one of the scenes of the crime, and ended up turning into the Man-Bat and flying away. Which is kind of a red flag. So, that night, Batman hops in his Batplane and begins flying around the city, looking for the Man-Bat. And, sure enough, he comes across the creature, flying around. Batman tries to subdue Man-Bat with the use of some sonic-canons, and then ejects from the plane to personally grapple with him. But, this doesn’t go very well, and the two end up crashing into a random apartment so they can battle hand-to-hand. But, Batman’s purpose isn’t just to beat up the Man-Bat. He doesn’t even think he’s the hero.

See, Batman’s been doing a lot of research into these murders, and he’s found something pretty startling. The forensic results seem to point to the death’s being the result of bats, but regular-sized ones. However, they don’t match up with any known species. Batman’s research seems to point to the bat’s being genetic creations that operate similar to piranhas. And, no one knows bats like Kirk Langstrom. So, Batman has been tracking the Man-Bat down not to beat him up, but to get in contact with Langstrom. And, once he has the Man-Bat in the apartment he uses some techniques to calm down, causing Langstrom to regain control of his own body. Batman then lays out the situation, and Langstrom is very eager to help, but does let Batman know that there’s a slight complication.

In the New 52 continuity Kirk’s wife, Francine, was revealed to actually be a corporate spy who apparently seduced and married Kirk just to get access to his Man-Bat serum for her own nefarious purposes. She’s now also a Man-Bat, and one with far less scruples than Kirk. He’s convinced that she’s the actual source of this bat-plague that’s been killing people in Gotham. He knows that she’s created a version of the Man-Bat serum that will turn regular bats into horrific monsters, which she’ll then be able to control mentally. And, Kirk wants to be able to help Batman take her down, since he views her as his responsibility. He’s created a special antidote to her serum that will leave her temporarily vulnerable to be arrested.

So, Batman and Kirk suit up, get their gear, and track down Francine to the same cave we saw in the beginning of the story, which they think is where she’s been nesting. Kirk is worried that the stress of this encounter will turn him into Man-Bat though, so he has Batman administer a slight sedative to keep him calm. The two then enter the cave, and begin battling waves of mutated bats with some sonic canons, all while Kirk does his best to stay away from their razor-sharp teeth. Unfortunately, that doesn’t work out great, and the bats end up attacking him, which is enough to cause him to transform into Man-Bat. Which was exactly what Batman was hoping to happen. He knew that the syringe Kirk brought with the serum wouldn’t be able to break Francine’s skin, so he came up with a much crueler plan. He never gave Kirk a sedative. Instead he injected him with the antidote, so that when Kirk transformed into Man-Bat and bit Francine, it would transmit the antidote. Which is exactly what happens! Francine is transformed back into a human, and Batman is then able to talk Kirk down, having him revert back to his human form. The two are then arrested and brought to Arkham, the murderous bats presumably taken care of by animal control?

This issue is pretty fun. Most Man-Bat stories end up feeling incredibly similar to one another, since they basically all boil down to Batman having to turn Man-Bat back into Kirk Langstrom. And, while this one was technically different, it wasn’t exactly breaking the mold. But, the slightly different things it did with the story were appreciated, and gave the issue a nice change of pace. There was some good mystery in the issue, even though it did get bogged down with some techno-babble ever now and then. I also kind of appreciated the cold, calculated way that Batman decided to turn Man-Bat into a veritable weapon, which was honestly a little surprising. It may not be the most traditional take on Batman, but it was interesting to see. So, while the issue does end up feeling kind of like every other Man-Bat issue I’ve ever read before, it did have enough special things about it to keep it interesting.