Red Sparrow and the Fetishization of Power 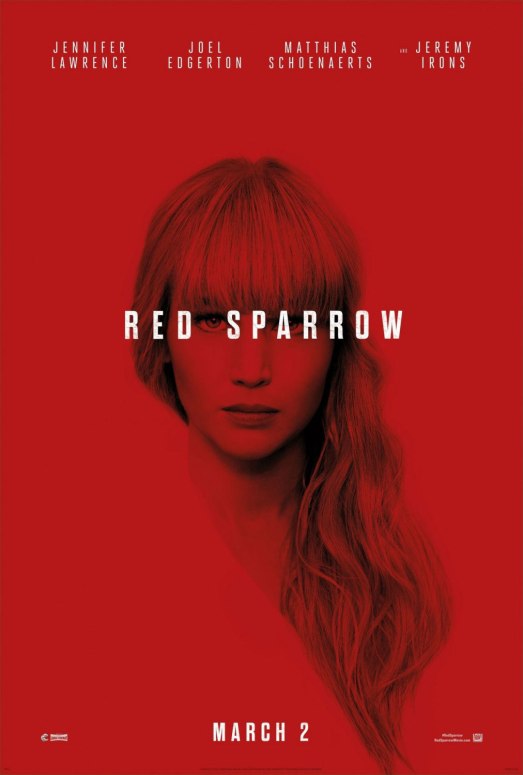 You know what the hardest type of movie to write about is? Ones that are just fine. A movie that I feel really passionately about, even if it’s negatively, can be a breeze to write about, and will often lead me to have to reign myself in and keep things from devolving into ramblings. Movies that I love can end in a joyous explosion of praise, happily digging into the minutia of the film while also hyping the film up and encouraging people to check it out for themselves. Likewise, movies that I can’t stand become oddly easy to write about too, really digging into whatever didn’t work with it, and using it like an autopsy to better examine what I like about narratives by discussing what I don’t like. But when you have a movie that just kind of bounces off you, things get hard. Usually if I see a movie I just can’t imagine having something to say about, I let it slide and move on. And Red Sparrow is a film that I assumed was going to be like that. I left Red Sparrow with very little opinions. It was fine. Nothing special, and nothing too bad. I had been hoping for something a little campier and weirder, perhaps dipping its toe into a more exploitative world. But, instead, it was just kind of forgettable. So, I planned to just let it breeze past me, to be forgotten by the sands of time. But, oddly enough, I’ve been thinking a lot about this movie lately, and why what actually did stick with me ended up bothering me.

This article is going to be a little different than my normal Reel Talk articles, because I’m not here to stan for it. It’s not a movie I recommend seeing, even if you’re morbidly interested in it. I thought that this was going to be something more similar to Atomic Blonde, a film that had a bunch of problems but which I ended up enjoying more or less. Instead this was a film that somehow managed to be salacious and mundane, juggling graphic sexual contact with rather staid espionage that felt like someone trying to pull off a John le Carre novel. When the movie first started to get marketed everyone started making the same jokes, noticing that the film seemed to be 20th Century Fox just going ahead and making their own Black Widow film since Disney doesn’t seem to be willing to do so. We had a Russian female spy who used to be a ballerina trained in a secretive organization to learn how to succeed in espionage through seduction. Seemed like a pretty blatant ripoff. But, the film didn’t even become that interesting.

It follows a young woman named Dominika who works as a ballet dancer in modern-day Russia, meting out a meager existence with her invalid mother. But, when she suffers a career-ending injury she finds herself at a loss. Until her shady uncle, who works for the Russian government, offers her a job. He brings her into a secretive organization that trains young Russians to become sex-centric spies, travelling around the world to seduce foreign enemies and get their secrets. Dominika is initially put off by this, but ends up becoming a star pupil of the service. She goes through the program, and her uncle ends up putting her out into the field, specifically to seduce an American CIA agent named Nate Nash, hoping to find who his contact in the Russian government might be. Nash immediately realizes that she’s a spy, and the two begin trying to double cross each other, the plot quickly becoming a near-incomprehensible mess of double-crosses and trickery. And, in the end, Dominika comes out on top, besting everyone around her.

This was not a fun movie. There were some good performances, albeit with a series of increasingly goofy Russian accents, and it was rather competently made, just without a lot of flair. Like I said earlier, the movie gets really sleazy, but it presents all of that sleaze in a very sterilized and dull manner. This was a movie that was begging to be much trashier than it ended up being. Or, possibly be made without the male gaze. Which gets us to my biggest issue with this movie, and the reason that it’s been popping into my head for the past week far more than I expected or wanted it to be.

Over the last few years there’s been a real trend of films featuring powerful women getting to take the spotlight in action flicks. A lot of them have been a lot of fun, but there was something about the way that Wonder Woman was made that really changed the game. I saw plenty of women thrilled by the movie, and one of the most prevalent positive mentions was the fact that it was a film staring a powerful woman that wasn’t muddled by the male gaze. It was an empowering film that displayed its protagonist as a force to be reckoned with, not just lusted after. And this film decided to go in a different direction! This is a story that really desperately wanted to be thought of like Wonder Woman. They were hoping that we would see Jennifer Lawrence as a strong and empowered woman, taking care of business. Instead, it came off as a film that was hoping to titillate its audience with the idea of a strong woman. There’s a fine line between these two ideas, but this film really made me see it better than any more I’ve seen before. Wonder Woman was an empowered character by her deeds, and Dominika is a character who came across like she was supposed to be sexy because she was empowered. There was no depth to her character, and this movie seems to exist in order to show her as nude as possible while also playing into some fetish of a lady spy who sleeps with men to their doom. I’m not saying that men shouldn’t helm stories about women, but maybe they should put a little more effort into it. Dominika didn’t feel like a character, she was a living fetish figure. It was a story crafted by men to show off a sexy woman in power, without seeming to give her any real strength. Maybe I’m off the mark here, and if there are women out there who have seen this film and completely disagree I’d love to hear about it, but it just felt like such a sleazy movie to me, and one that didn’t respect its protagonist so much as patronize her.