The Hitchcockian Joy of Thoroughbreds 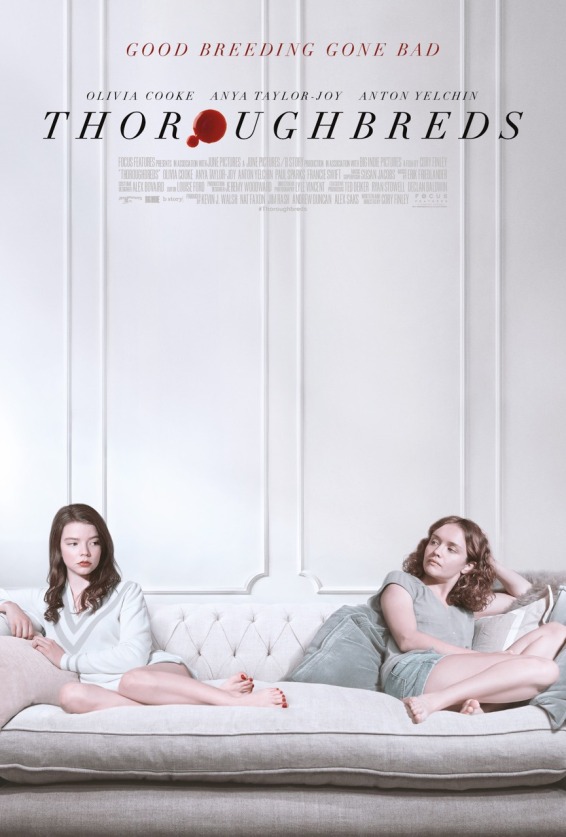 If you’ve spent much time at all reading my ramblings and musing on film, you’ll be able to tell that I’m a huge sucker for weird stories about criminals. Noir is my main interest on this front, but really any story that features people deviating from social norms and playing around with the world of crime is enough to get me at least partially interested. So, when you have a film that features two actresses I think have great career ahead of them, that contains the last performance of Anton Yelchin, and that I’ve seen described as a Patricia Highsmith novel on cocaine, I’m going to be interested. And, as luck would have it, it’s also a hell of a movie. I’ve been fascinated with Thoroughbreds, the debut feature of director Cory Finley ever since I first heard about it. The cast was stellar, the premise was intriguing, and the marketing of the film seemed to promise a twisted suburban crime thriller, the likes of which we just don’t get that much anymore. And, against all odds, it met those promises. There’s certainly an irrational part of me that’s jealous that Cory Finley has written and directed such an amazing debut film when he’s basically the same age as me, but putting that insanity aside I can just appreciate the closest thing to a Hitchcock thriller we’ve had in years, and a film that I can go ahead and assume is probably going to be one of my favorite films of the year.

Thoroughbreds follows two young women in an exceedingly wealthy suburb of Connecticut. We have Lily, a spoiled and popular girl who lives with her mother and her over-bearing step-father after the death of her father, and Amanda, an outcast with sociopathic tendencies who was once very close with Lily. The two are brought together when Lily begin tutoring Amanda, who has recently gotten a lot of attention in the community after she killed her own horse, putting it out of its misery after it broke its leg. The two are rather awkward together at first, especially because Lily is incredibly off put by Amanda’s lack of emotions, but they eventually begin befriending each other. And, as they begin spending time together, Amanda starts to realize how very much that Lily hates her step-father. He’s mean, controlling, and brings out the worst in her mother, and she would do anything to get him out of her life. So, trying to help her friend out, Amanda suggests that they could just kill him and get rid of him that way, insisting that they could do it in a manner that would never get them caught.

Lily is horrified at Amanda’s suggestion, and tries to distance herself from her odd friend. But, the more she has to think about it, the more she likes the idea. Especially when her step-father tells her that they’re going to be taking her out of her current boarding school and force her into a very strict school away from her friends. So, Lily brings Amanda back into her life, and the two start hatching a perfect murder. But, to do so, they need a patsy. And they find a perfect one when they encounter a sleazy drug-dealer named Tim. They end up hiring Tim to break into Lily’s home while she and her mother are at a spa-weekend and Amanda is at a counselor, to give themselves an alibi. However, after an altercation, Tim proves to be all talk, and ends up being no help whatsoever to Lily and Amanda. But Lily won’t give up. She’s convinced that killing her step-father is the only reasonable course of action she has left, and she starts pushing Amanda to just help her do it themselves. Amanda’s not quite sure though, partly because they won’t have an alibi, and partly because she’s now questioning whether Lily’s step-father really deserves to die. So, Lily decides to take matters into her own hands, and concocts a plan to kill her step-father, while also framing Amanda, letting her take the fall for the crimes so she can get off scott-free.

Thoroughbreds really is a special film. We just don’t get movies like this that often, and it’s a true shame. I’m in awe of the fact that Cory Finley, a creator who is so fresh was able to pull this film off. Because it doesn’t seem like an easy task. A story about two teenage girls who are planning on murdering someone could easily cross the line into exploitative farce, but this film remains a true pleasure through its entire runtime. It’s a tensely plotted well-crafted crime story, dripping with style and a twisted sensibility that I just loved. And it’s all bolstered by a trio of terrific performances. I’ve been a fan of Anya Taylor-Joy and we burgeoning career as a modern-day scream-queen with films like the Witch and Split, but she really comes into her own with this film, proving that she’s going to be a real force to be reckoned with as she continues to hit her stride. Likewise, I really enjoyed Oliva Cooke in Me, and Earl, and the Dying Girl, but her turn as the sociopathic but lonely Amanda in this film was an absolute joy. And then there’s poor Anton Yelchin. That guy really had a terrific career ahead of him, and it’s just such a shame that his life was cut so short. But, if this is going to be his final performance, at least it was a very enjoyable one. And it all comes together to create a wonderfully twisted thriller in a Hitchcock vein that completely worked for me.

Some of my favorite Hitchcock films were about normal people pushed into works and scenarios that they never would have imagine themselves in. Average men and women put into unthinkable situations, showing us how they’d react. And this film does something similar, taking two seemingly average girls and putting them into a murder plot. But, as the film goes on, we start to realize that Lily and Amanda aren’t exactly normal. We see from the beginning that Amanda isn’t quite like everyone else. Her hard to define mental disorders leave her completely numb to the world around her, a creature of pure heartless logic. But, she’s openly herself. Which has ostracized her from the world around her. Lily however, is something else. She’s constantly worried about how other see her, and is struggling to be accepted by everyone around her. And yet, she thinks only of herself. She wants to kill her step-father, without really giving any thought as to how that will impact others. She’s even willing to frame her friend, the person who tried to help her, all to get ahead and live the life she wants. She’s just as twisted as Amanda, she just keeps in on the down low. And this film leaves you wondering, what’s more insidious, the sociopath who admits to the world that she’s broken, or the psychopath who keeps it hidden?

Thoroughbreds was written and directed by Cory Finley and released by Focus Features, 2018.