Well, it looks like the fun little marathon of silent comedies that’s been making up my Cinematic Century for the last couple of weeks has finally come to an end. And, what better way to finish of this run of quirky comedies than with one of the biggest and craziest films of the entire silent era? That’s right, today we’re going to be talking about Fritz Lang’s magnus opus, and one of the greatest science fiction films of all time, Metropolis. Hell, it’s one of the earliest science fiction films. And it’s really a sight to behold. The first time I saw Metropolis I was absolutely blown away by the sheer technical marvel that it was. The plot, honestly, isn’t the film’s strongest feature. The reason that you check out Metropolis is to be stunned at the innovation and artistry involved with crafting such a story. When it came to 1927 I actually had a lot of options that I could have chosen from. We could have been discussing the Jazz Singer for its historical importance as the first major talkie. Likewise we could have checked out Wings the very first winner of the Best Picture Academy Award. But, I think the biggest competition that Metropolis had to face was from F.W. Murnau’s seminal romance Sunrise. However, and I may have to turn in my cinephile card or something for this statement, but I’m actually not a fan of Sunrise. I even revisited it before rewatching Metropolis just to make sure. Sunrise is an interesting but deeply strange film. It’s got very bizarre pacing, a kind of twisted premise, and it just generally has never clicked for me. But Metropolis? Metropolis is fantastic.

There’s a lot of interesting aspects to the making of Metropolis. From the fact that it was based on a novel specifically written so that it could be adapted to Lang’s idea to cast unknown and largely inexperienced actors. The visual effects of this film are obviously the most notable aspect of this film, and the way that Lang and crew tied together several different methods to pull this film off. Primarily miniatures, but it was still a wonderfully innovative and impressive film. But, despite all of that, I think one of the most interesting aspects of this film isn’t from the production, it’s what happened after it was released. Because audiences of 1927 were not sure what to make of it. It was a massively expensive film, and one that didn’t get the critical or commercial success that was expected of it. So, in an attempt to salvage it, the film ended up receiving some massive cuts, hoping to streamline it and make it a more palatable length. This didn’t seem to work, and Lang ended up feeling quite conflicted about the film, especially when the Nazi’s started to look at it with Germanic pride. But, eventually, people came around on Metropolis, and it started to be appreciated as the marvel that it was. However, that did lead to a bit of a problem. Because the film had been so butchered there wasn’t a complete cut of Lang’s true vision. And it’s still that way. This is the first incomplete film that I’ve discussed here on Cinematic Century, but it’s unfortunately something that you can come across quite often in the silent era. The film is mostly here, and what isn’t is stitched together from transcripts from censorship notes, leaving the film at an incomplete but perfectly understandable format. And, even with some pieces missing, there’s no denying what a spectacular experience that Metropolis is. 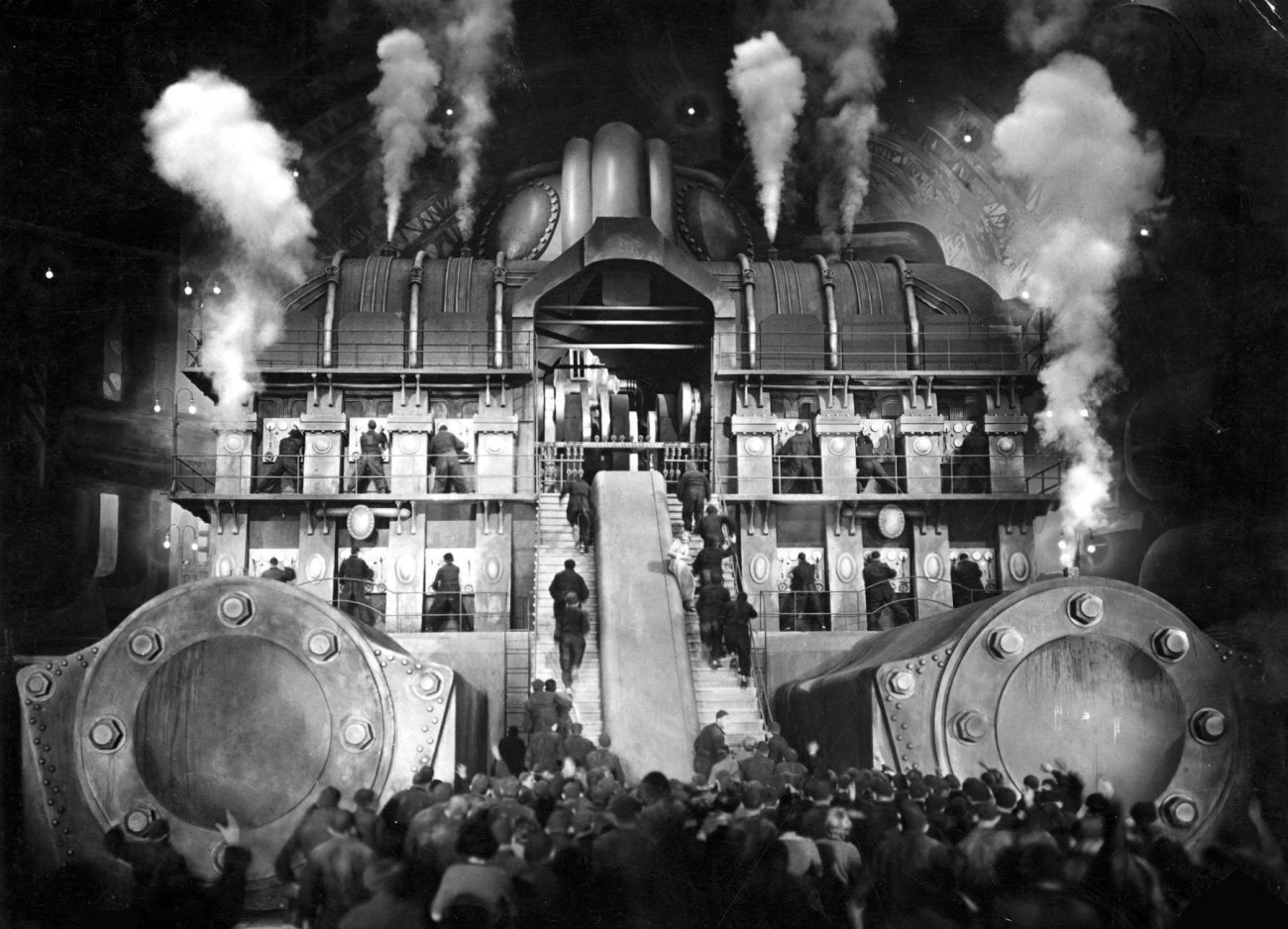 Metropolis is set in the far flung future of 2026 in the titular city, a bustling land full of innovative technology and massive skyscrapers. The rich ruling class of the city frolic around in the beautiful high-rises, getting to enjoy all of the wonders of the city while the poor working class are forced to live below-ground, their manual labor powering the massive machines that give energy to the rest of the town. And one of those rich people is Freder the son of the man who invented the Heart Machine, the source of Metropolis’ power. Freder enjoys a life of leisure, until one day everything changes. Because while he’s cavorting about in a garden one day he suddenly meets a woman named Maria. She’s from the underground and is something of a leader down there. She’s trying to bring up some poor children, letting them see the sun for the first time, when she’s rudely put back into her place. But, Freder is intrigued enough to follow Maria and the children down into the underbelly of the city, to a place he’s never been before. And he’s horrified. He sees the horrible conditions that the poor live in, and the back-breaking work that they go through every day to create the paradise he enjoys. So, with the fresh knowledge that the upper class exploits the working class, Freder returns home to talk to his father, Joh Fredersen. Freder’s father isn’t exactly interesting in listening to his dilettante son’s opinions on capitalism, and he kind of has bigger fish to fry anyway. Because one of the men down in the factories has uncovered a mysterious map that several of the workers have had in their possession, and they think that it may signify that the workers are having meetings to overthrow the social structure.

Fredersen is worried about this potential uprising, and decides to go get the advice of his dirty secret. An inventor deep in the Metropolis named Rotwang. Rotwang actually designed almost everything in the city, the Steve Wozniak to Fredersen’s Steve Jobs, and he actually knows how to track down the location of this map. But, first, he shows off his latest invention, a robotic humanoid that he’s planning on using to recreate a woman named Hel, who both Rotwang and Fredersen loved, but who eventually chose Fredersen. But Fredersen isn’t really interested in this, and eventually gets Rotwang to lead him to the location on the map. And when they get there they end up finding a hidden chapel where Maria is lecturing the workers about the evils of capitalism by telling them the story of the Tower of Babel, teaching them about hubris. And, included in this group of workers is Freder, who has decided to rejoin the working class to help them. Frederson and Rotwang are rather intimidated about the sway that she has over the workers, so they decide they need to do something to discredit her. Luckily, Rotwang has the perfect idea. He’s going to kidnap Maria, bring her back to his lab, and use her likeness and mind on his automaton. And this plan goes swimmingly.

Rotwang then sends the robotic Maria to Fredersen’s office to get her instructions, and while there Freder spots her, and gets very confused. He’s fallen in love with Maria, and can’t believe what she would be doing with his father. So, he heads back down into the underground, right as Fredersen send the false Maria down. She begins preaching to her people, telling them to give up their goals and become debaucherous. But, Rotwang decides to make a play to overthrow Fredersen, and ends up getting the False Maria to switch gears, and convince the working masses to stop working, and destroy the machines that run the town. They then begin a revolution, while abandoning their children. Meanwhile, the real Maria escapes Rotwang’s laboratory, and ends up running into Freder. They then realize that after the workers have destroyed the machines their homes are now being destroyed by a great flood, which has the chance to kill all the children. Freder and Maria manage to save the children, and then bring the workers to their senses, which is helped when they burn the false Maria at the stake and reveal her robotic form. Freder and Maria then head off to expose the whole event, and after battling Rotwang atop a cathedral he falls to his death. Fredersen then realizes that everything has fallen apart, and with the help of his son, decides to be a better person, and works to better the lives of the workers, and create a more perfect Metropolis. 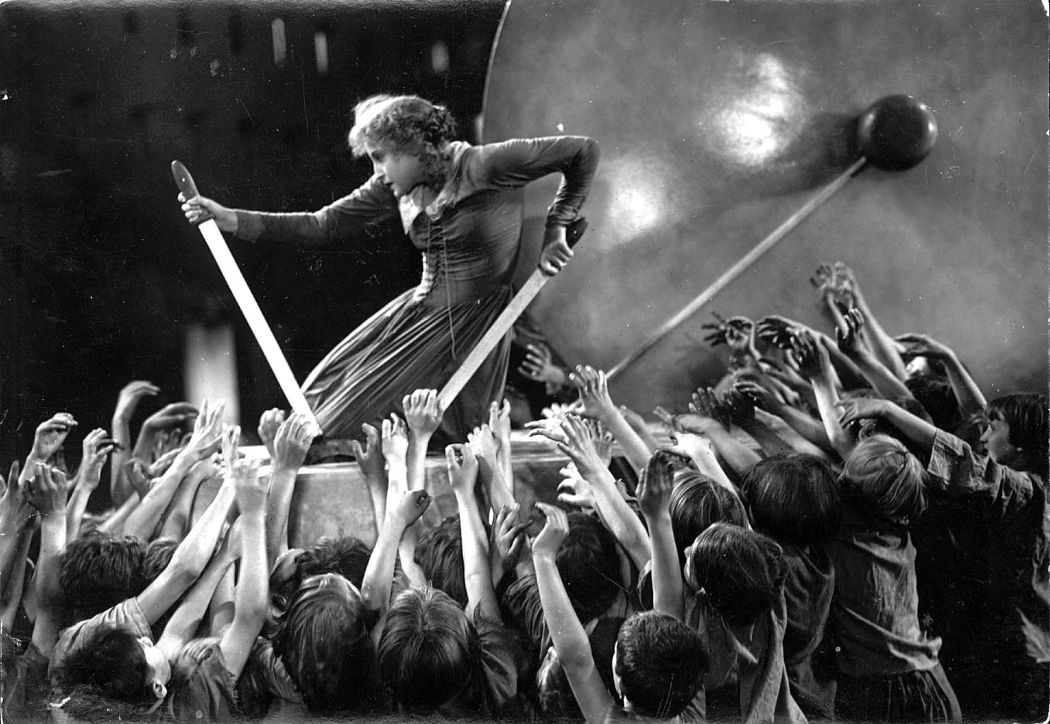 Metropolis really is a film that has to be seen to be believed. It’s one of the most seminal pieces of film in the history of the medium, and as soon as you see it you can begin to trace the innumerable influences that it’s had on film-making over the decades. It’s one of the most technically innovative films of all time, and seeing the blend of special effects that brought the vibrant and futuristic world of Metropolis to life is simply breathtaking. I do have to admit that the acting in the film can be a little over-the-top, even for a silent film, but for this film it kind of works. Because this is a big, boisterous, melodramatic fable of a movie. It’s full of massive sets, enormous crowds of extras, and it plays around with some really big ideas. It’s hard to believe that this film wasn’t exactly appreciated when it first came out, even though much of the criticism seems to be based around the idea that the film was too unrealistic, and didn’t match with the people of 1927’s views on the future, the working class, and the sheer idea of robotics.

Which is honestly one of the things that makes it so incredibly fascinating. It seems that in 1927 this film was seen as an outlandish and silly screed against progress. They thought that the idea of a robot being used maliciously was absurd, and that a film that seemed to decry the idea of capitalism was ridiculous. Cut to modern day and you begin to see that this film may have been spot on. We have a rich ruling class who work hard to keep the working class down, who steal their labor and ideas and keep them locked in a perpetual cycle of misery. The idea of robots that end up harming humans rather than helping them is so widespread that any time we have some sort of technological innovation in the field people have to assume that it’ll be the downfall of humanity. Hell, we even have businessmen stealing the ideas of inventors and passing them off as their own. Metropolis was certainly a science fiction film. It was a far-flung vision of the future, or a world that 1927 someday could become. And, honestly, they did a pretty good job of guessing how things would be. And it’s bleak. This is a film that seemed to understand that things were just going to be the same, always. That regardless of technical innovations in our society, bad people will manage to rise to the top, and oppress the people at the bottom. I really do believe that at the time people found this film to be cynical, and they may have rejected it because it painted such an ugly future that they were sure wouldn’t come to pass. And yet, it’s a shockingly prescient story. No matter how advanced we get, it seems to be human nature to fall into these same societal traps. The film ends on a happy note, suggesting possible peace between the classes, but if there’s one thing that you can take away from this film, it’s that humanity doesn’t really seem to have peace in it’s cards.

Metropolis was written by Thea von Harbou, directed by Fritz Lang, and released by UFA, 1927. 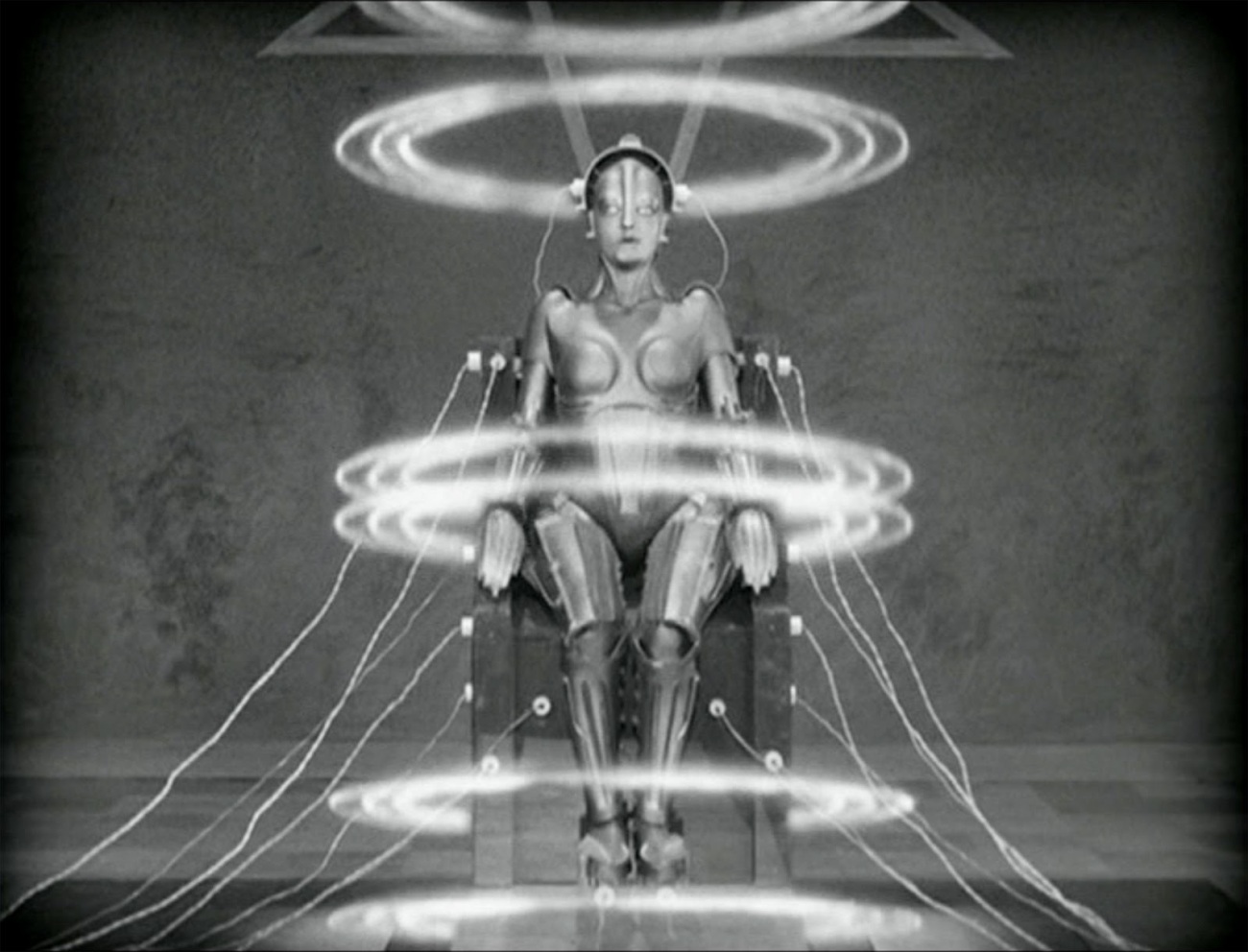