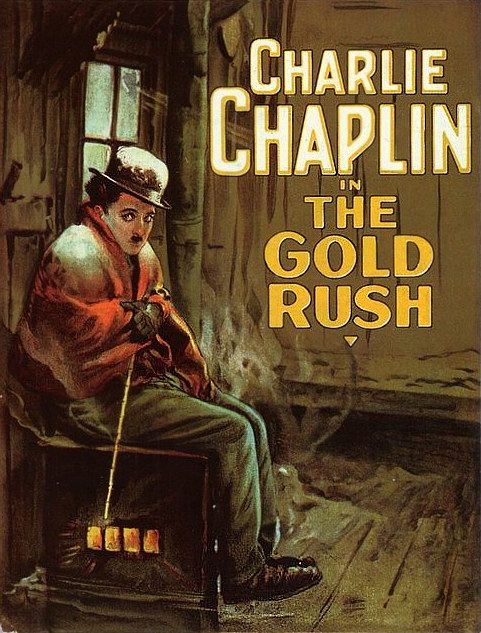 Oh, look! It’s time to talk about good old Charlie Chaplin again! We get to keep this streak of classic silent comedies going this week with the film that Charlie Chaplin claimed he hoped he’d be most remembered for. I don’t think that that’s necessarily been the case, and I personally think three of his coming films are more deserving of this honor than the Gold Rush, but that’s not to say that this isn’t an amazing film. Chaplin’s one of those creators where even his slightly lesser works are still better than most people at their heights. The Gold Rush is a film that I first saw a couple years ago when I participated in a challenge to watch 366 films I hadn’t seen before in a single year. And, in order to make that number, I chose a lot of films primarily based on their length. So, when I realized I didn’t have much familiarity with silent comedies, all of which usually ran just over an hour, I’d found a great way to cross the finish line. And, it just so happened, that a lot of these films were amazing, and it was completely worthwhile to visit them. Such as the Gold Rush. At the time that I first saw it I hadn’t seen many silent films, and I found it to be pretty fun, but nothing too mind-blowing. But, upon revisiting it for this project, I realized what a true treasure it is. I had some alternative choices here for 1925, since it was a pretty stacked year. I could have gone with the classic Russian film Battleship Potemkin, or the proto-Universal Horror Lon Chaney Phantom of the Opera, or maybe even Harold Lloyd’s goofy the Freshman. But, as soon as I finished rewatching the Gold Rush I knew that there was no competition for this year. Because this movie is a delight.

Although, there was a part of me that wondered if I should technically include it for 1925. Because, famously, the Gold Rush was re-released in 1942 in a rather different format. By 42 Chaplin had embraced the idea of sound in film, and he released a new version of the Gold Rush that had some scenes removed, some quicker editing, and a full narration by himself. So, while it’s still ostensibly a silent film, there’s no longer any title-cards and Chaplin explains everything that’s happening, even putting words in some of the character’s mouths. And, this is the only version of the film that I’ve seen. I know that Criteron has released a more accurate original cut, but I’ve never been able to get my hands on it, and it’s not the film that I’ve seen before. I suppose that that may make this film my first talkie, and that maybe this should mean that I can’t make it my pick for 1925, but since this is my project I’m going to allow it. Because, even though the film I’ve seen and loved isn’t quite what was released in 1925, and even though Chaplin’s narration can be a tad distracting, it’s the film behind all of that that matters. And it’s a great one. 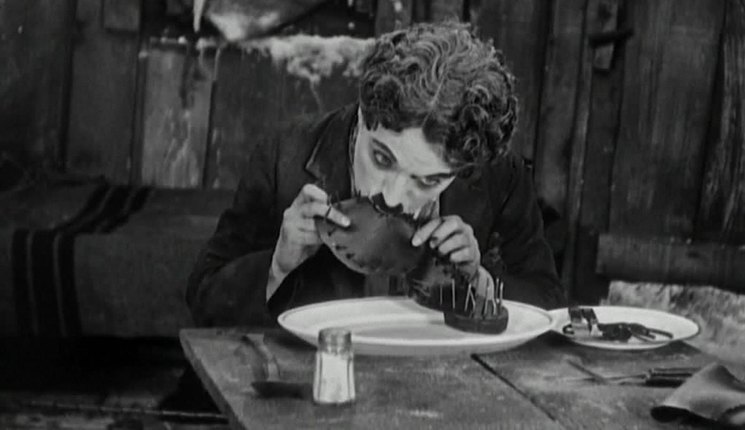 The Gold Rush, as usual, follow the exploits of the Little Tramp. This time he’s traveled to the Yukon to participate in the Gold Rush, and he finds himself lost on a mountain during a blizzard. He end up encountering two men in a cabin, the wanted criminal Black Larsen and the grizzled prospector Big Jim. The three men try to wait out the blizzard in the cabin, but eventually their food runs out, and they have to send someone out to get supplies. Black Larsen ends up losing their game, and he has to head out into the blizzard, only to find evidence that Big Jim has found a huge gold deposit. So, Larsen tries to steal the gold, and leave the other men to die in the cabin, after killing some people who recognize him as a wanted criminal. So, the Tramp and Big Jim are forced to stay in their cabin, waiting out the storm, while resorting to eating their shoes. They come very close to starving to death, but eventually a bear wanders into their cabin, and they manage to shoot it and survive off it until the storm subsides. And, once that occurs, the two men go their own way. The Tramp gives up on his prospecting ideas, and goes to a local boom-town, while Big Jim returns to his gold mine. He ends up finding Larsen there, and gets smashed over the head before Larsen flees, and is killed in an avalanche.

The Tramp ends up in the town, looking for warmth and some sort of purpose. He wanders around, and eventually ends up in a popular dance hall where he’s immediately infatuated with a woman named Georgia. She’s constantly being pressured by a man named Jack to be with him, so to spite him, she ends up asking the Tramp to dance, and he instantly falls in love with her. And he doesn’t realize that it was basically just a bit. But, he doesn’t obsess over Georgia, and continues trying to find his way in the town. He eventually meets a man named Hank who allows the Tramp to live in his modest house while he travels out in hunt for gold. And, it’s in this house that the Tramp ends up running back into Georgia when she and her friends come to the house during a game of hide and seek. The continue messing with the Tramp, which he doesn’t recognize, and when they see that the Tramp has kept mementos from the night that he met Georgia, they decide to pull another prank. Georgia and the women tell the Tramp that they love his hospitality, and say that they would love to come over for New Years Eve. The Tramp thinks that this would be a great idea, and over the next few days works his ass off to get enough money for a good dinner, some decorations and some gifts.

There’s just one problem. It was all a joke. They girls never show, and the Tramp has to sit there alone. He finally realizes that he’s been tricked, and wanders down to the dance hall for a modicum of human interaction, at the same time that Georgia starts to feel bad for what she’s done. They end up passing each other, and Georgia sees what the Tramp did for her, and feels terrible. She heads back to the dance hall and finds him, but before they can have any real sort of reconciliation, Big Jim shows up. He has amnesia and can’t remember where the gold deposit was, but know that it’s some where near the cabin. So, in exchange for half of the money, Big Jim wants the Tramp to guide him back to the cabin. The Tramp agrees, and the two head back to the cabin, but with plenty of food this time. However, that night when they sleep a massive storm kicks up, and pushes the cabin off of it’s foundation, and throws it down the mountain. They wake up the next morning, teetering over the edge, and have to crawl out of the cabin. But, it’s okay, because it just so happens that the cabin is now exactly where the gold deposit was. Big Jim and the Tramp then become rich, and we see them board a ship leaving the Yukon for California. And, as luck would have it, Georgia is also on the ship. The two end up running into each other, and the film ends with their happy reunion. 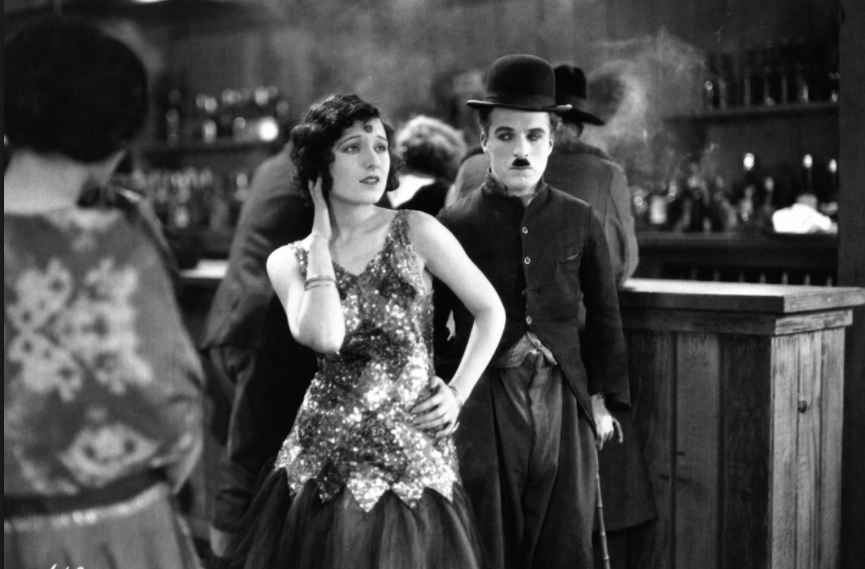 This is the film that Charlie Chaplin felt he should be remembered for. And, I think I can see why. Like I said earlier, I think he will go on to better films further in his filmography, but there’s something about this film that makes it the perfect example of a Chaplin film. Chaplin himself is terrific as always, delivering sweet moments, funny ones, heartfelt ones, sad ones, and even exciting ones. The film has genuinely hilarious moments, like Chaplin trying to dance while a dog is tied to his waist, or the famous scene of him and Mack Swaim trying to eat the shoe. But it also has Chaplin’s trademark heart mixed in there as well. And, beyond that, it’s got some of his most famous images. We see Chaplin eating a show, doing the silly dance with the roll-feet, the cabin teetering on the edge of the cliff, and so many other classic moments. He had films in the future that would have better stories, but this film has so many of Chaplin’s iconic scenes that it’s very understandable that this could be the film most people think of when they think of his work.

Back when I discussed A Dog’s Life I talked about how Chaplin had a gift for creating funny films about the loneliest people. The Little Tramp character is so often the outsider, a strange little being who shows up in people’s lives and just seems confused by everyone else’s lives. And this film really gets into concept. The Gold Rush is kind of a strange film, since it does feel like it could be two different short films that got put together. All the goofy stuff in the cabin is mostly separate from the plot in the town. I love the cabin scenes. They’re hilarious and feature some of Chaplin’s funniest physical comedy. But, the reason that this film was my pick for 1925, despite some questionable re-release factors, was because of the emotional core that came in the second act of the film. I think the idea that Georgia and her friends are mocking the Tramp and just treating him like shit even though he’s nice has some weird connotations nowadays with all the “nice guys getting treated like crap” nonsense that those MRA idiots spout. But, despite that, I think that this film is the loneliest that the Little Tramp ever got. Seeing him wander around the town, watching other people be happy, is so heartbreaking. He just wants to have someone to be with him, someone so that he isn’t wandering around life alone. Yeah, he gets taken advantage of and treated like a joke for a while, but he doesn’t let it crush him. As someone with social anxiety and who has dealt with a lot of loneliness in my life, seeing the Tramp just trying to find some human warmth in the little town was incredibly affecting and relateable. Chaplin was a master at making you laugh, but he could also tug on your heartstrings just as reliably, and this film really showed off those strengths.

The Gold Rush was written and directed by Charlie Chaplin and released by United Artists, 1925. 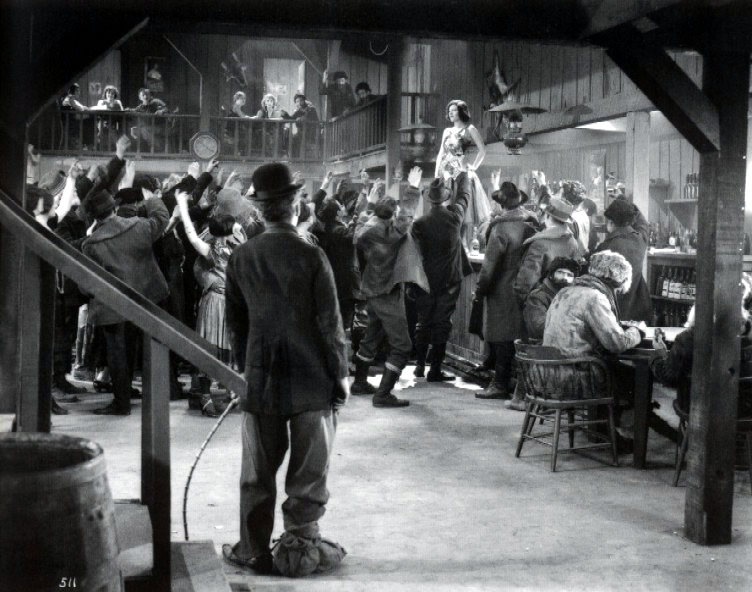