Well everyone, we’re done with our first week of the Wrap-Up of Lifetime of Simpsons. We’ll be discussing my favorite episodes from Season Twenty-Five through Twenty Eight, and then talking about what is my favorite of Season 29 so far. And, across the board, we have some pretty fun episodes to talk about today, showing us that even here in the most modern era of the show they’re still able to put out some quality stories.

The Simpsons is now a show that’s really comfortable with experimentation. At least in the modern era. It often feels like they’ve found some pretty solid formulas, and have just been cranking out new stories that fit in those formulas ever since. So, it’s always noteworthy to see the show trying something new, even if it’s a tad gimicky. So, of course I was going to be interested by “Brick Like Me.” At its core, the episode’s story is a familiar one. It’s about Homer getting worried that Lisa is outgrowing him, and he’s scared that when she becomes her own person she won’t have any interest in being with him anymore. I like that story, and it’s bolstered by the show playing around with some fun Lego animation, and taking a weird look at the nature of reality. Which, is certainly something that we don’t see on the Simpsons that often. It’s an episode that somehow felt familiar and experimental, and that’s something to appreciate.

“Brick Like Me” was written by Brian Kelley and directed by Matthew Nastuk, 2014.

But hey, it doesn’t always have to be about drama. I’m always here for when the Simpsons gets emotional, but sometimes all I want is a really fun and well-executed episode. And “Sky Police” is an episode that I’m amazed worked out as well as it did. I mentioned this in my article for this episode, but the premise of the church council needing to raise funds for the church is an incredibly unappealing premise to me. But, to take that and make a fun Soderberg-esque heist episode where Marge and the gang learn to count cards in order to screw over a casino is an incredible idea. I really don’t like the fact that most Marge episodes revolve around her failing. Most of them have Marge trying to get a job, and then watching as everything goes catastrophically wrong. So, seeing an episode that’s certainly Marge-centric, but that revolves around Marge doing something awesome and succeeding is an absolute delight.

“Sky Police” was written by Matt Selman and directed by Rob Oliver, 2015. 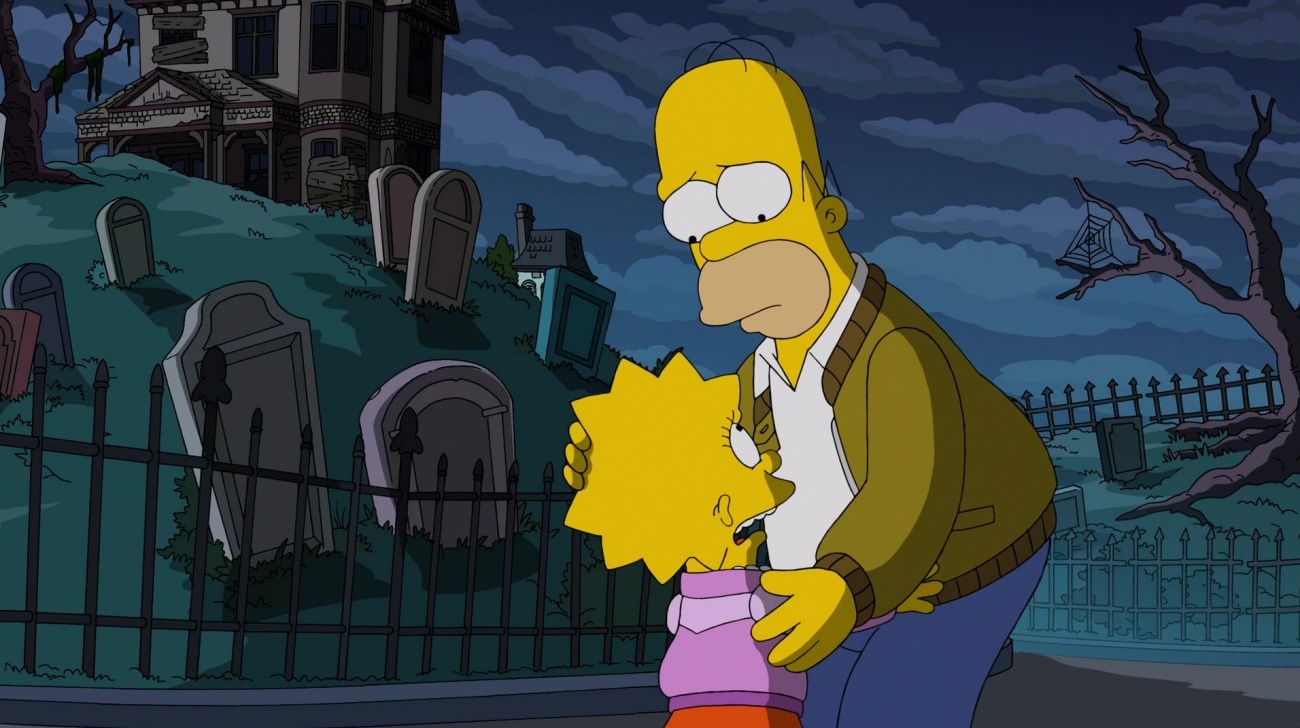 When it came time to sift through the seasons and pick these favorite episodes, some were harder than others. Every now and then I really had to think and find kind of the least-objectionable episode. But not Season 27. Because as soon as I saw “Halloween of Horror” I fell in love with it. I can’t believe that over the then 27 year history of the show they’d never done a Halloween episode that wasn’t a Treehouse of Horror. That alone made this episode pretty special, but then to take that and craft an incredible story that revolves around Homer and Lisa learning life-lessons really makes this episode something special. Hell, they even have an original song and dance-number tossed in. It’s just an incredible episode, and one that has become not just a favorite episode of this later-era of the show, but of the entire series in general.

“Halloween of Horror” was written by Carolyn Omine and directed by Mike B Anderson, 2015.

As I was just saying in regards to “Brick Like Me,” I’m always in favor of episodes that show the Simpsons trying to branch out and try something different. And, there’s not much outside the Simpson’s usual MO than an hour long Great Gatsby-riff that’s also about hip-hop culture. And I really loved it. Part of that definitely has to do with the fact that this is a very Mr. Burns-centric episode, which is something that had all but vanished by this period in the show. But, it’s not just Burns that makes this episode work. Really, it’s almost everything. There’s some lackluster B-Plots strung around, but the central plot and the characters that it invents is fantastic. It’s a huge and sprawling episode that easily could have been a complete misfire, but it ends up working far better than it probably had any right to, and I really found myself enjoying it.

“The Great Phatsby” was written by Dan Greaney and Matt Selman and directed by Chris Clements and Timothy Bailey, 2017.

I wasn’t sure if I should do this when I first planned this wrap-up week, and I’m still kind of reticent about it, but I figured that since the project is kind of over it would make sense to talk about my favorite episode of this season so far. Plus, I can’t imagine that we’re going to see an episode much better than “Mr. Lisa’s Opus” this season. Because this episode is terrific. I’ll let you all know now, next week when I do a series of rankings I’m going to do one that revolves around flashback and flash-forward episodes, which this episode is both. And it does quite well. Because this is a terrific episode. I love Lisa Simpson, and seeing periods of her life that we’ll never be able to normally see, all while reminding us what kind of a person Lisa is, is just a great treat, and I loved it.

There we are, folks! Those are my favorite episodes from each Season. And, I’m pleased to see that I was able, with almost no stretches, able to find at least one episode from every season of the show that I genuinely enjoyed. When I first began this project I was incredibly worried about the seasons that occurred after I gave up on the show. I imagined that it would be a slow, sad slide into decline. But, pleasantly, that didn’t happen. The show had some serious low points, and it never quite made its way back to the “Golden Era” quality, at least consistently, but it makes me so happy to see that this show still can produce some quality stories. And we’re not done yet! I’ll see you all next week in order to do what the internet loves most of all. Ranking things!