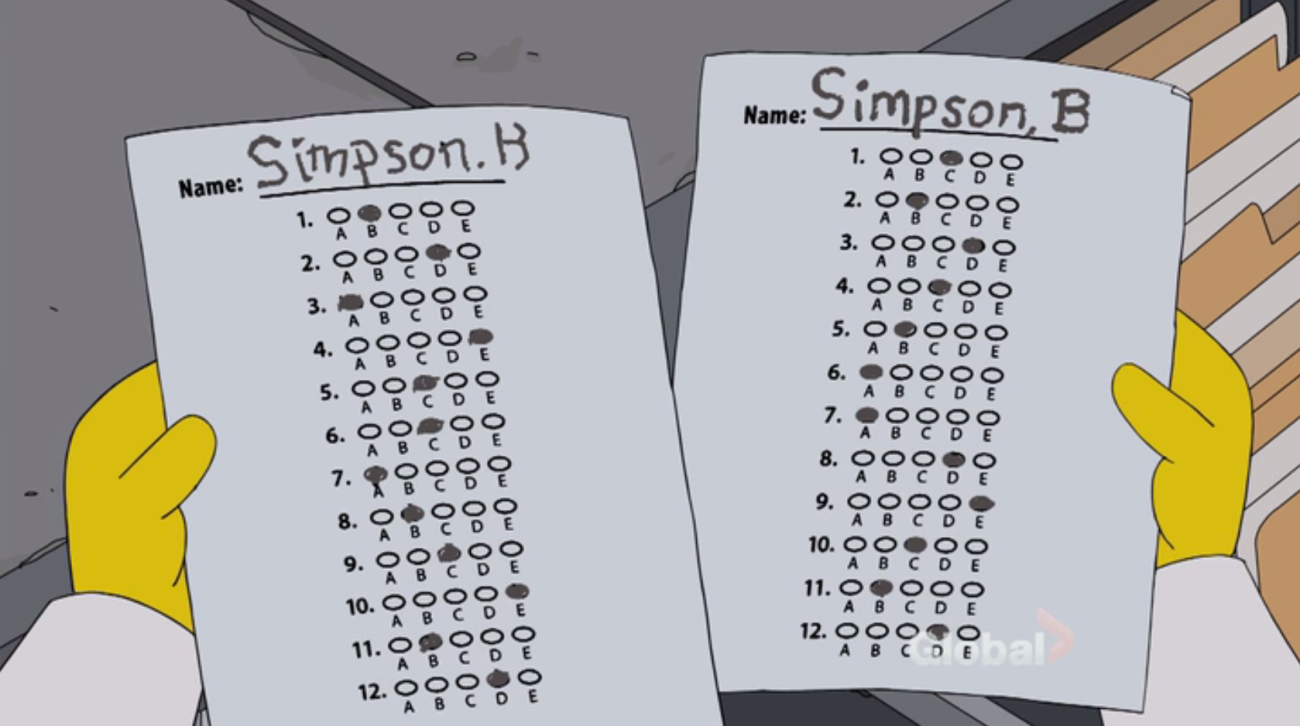 Folks. We’ve done it. Today is the most recent episode of the Simpsons. We’ve reached the end of the Lifetime of Simpsons. This episode was released just a couple weeks ago, and it appears the show is on a brief break, coming back in mid-March. So, for now, we’re done. I have to admit, I’m kind of surprised that we’ve made it this far. Now, this isn’t the end of the project. Not completely. I’ll talk about that more at the bottom of the article though, for now we need to talk about this episode. It’s mediocre!

The episode begins with the family sitting around, watching some TV channel that proports to be educational, but is mostly about all the various impending apocalypses that may be befalling Earth at any moment. Specifically, they’re watching some sort of documentary from the 80’s that’s hosted by Orson Welles all about Nostradamus and all of the prophecies that he came up with, and how they’ve predicted the ruination of humanity.

The documentary explains that Nostradamus predicted that when the antichrist is elected as President, the world will be destroyed by a fiery mushroom. This is translated to the fact that since Donald Trump is President, nuclear war is probably imminent. Which, you know, probably. But, one member of the Simpsons family isn’t buying it. Lisa, of course, says that believing in the predictions of Nostradamus is absurd, and can’t imagine who in the world would be buying this.

Turns out that the answer to that is Mr. Burns. He’s watching the documentary and becomes convinced that the Earth is doomed, and it’s up to him to find some way to save things. Well, not him. Instead he tells Smithers that he needs to bring the Springfield branch of Mensa together in order to come up with a plan in order to keep Burns safe during the Apocalypse. And, whatever other townsfolk Burns needs in order to take care of himself.

So, the Springfield branch of Mensa are brought to Burns’ mansion in order to solve things. We see Sideshow Mel, Manjula, Dr. Hibbert, Comic Book Guy, and Lindsey Naegle, all of whom are spending their time playing word games and proving how smart they are to each other. Which isn’t exactly what Burns had in mind. He specifically wanted these people to get their brains together and design some sort of space-ark that will be used to flee the planet when everything goes to hell. He also tasks them with finding Springfield’s best and brightest, and since these are people whose whole senses of self-worth revolves around their IQs, they decide that they’ll figure this out by testing the people of Springfield’s IQ. However, Professor Frink arrives and has a different idea. He says that in this scenario IQ isn’t going to be the best measure of success. Instead he wants a whole new test that finds a person’s Personal Value Quotient which will include emotional intelligence in order to find how worthwhile a person is.

The other Mensa folks are pretty wary of Frink’s idea, but he has written and choreographed a song and dance number about his new test, and this convinces them that they should go with it. The only problem is, how are they going to convince the entire town to take this test without them knowing exactly why they’re taking it? Well, Mr. Burns has the answer for that.

He has the police go around, round everyone up, and force them to take the test in the convention center. Subtle! The townsfolks are pretty curious about why they’re taking this test, but they don’t have the gumption to ask, and just go through with it. And, after a couple of days, the news prepares to reveal the results of the test, playing a scrolling list of everyone in town and how they scored on a scale from 1 to 500.

The Simpsons gather around and watch the list, pausing in order to see how they did. Lisa’s pretty proud of getting a 475, but it pretty horrified when she realizes that Ralph Wiggum got a 476. We then see that Marge and Homer do decently with 311 and 265 respectively. Unfortunately, they do have some bad news. Bart got a 1! The lowest score in the whole town. Everyone in the family is pretty awkward about this, but Bart insists that he’s okay with this revelation.

Bart promises that there’s a role for him in society, he just needs to find it. But, this is when the episode kind of starts to become a little screwy. We start following a bunch of plots, jumping around at rapid-fire. But just for a moment. We see that Burns has had a nightmare where Orson Welles tells him the time is coming, so he forces his Plant employees to start building the Ark. Lisa has become fixated on figuring out why Ralph is slightly more important than she is and follows him around. And Marge is worrying about Bart. Marge finally decides that she can’t take it anymore, and decides she needs to get an answer about why Bart is so useless, according to this test. She forces the rest of the family to head over to Frink’s laboratory she demands that he checks the results of the test. Frink agrees to do this, and he starts to flip through the results, only to find something shocking. There actually was a mistake. Bart didn’t get the 1. Homer did. And his handwriting was so bad that they thought the H. Simpson on his test was a B.

So, now Homer is the worst person in Springfield, and Homer is incredibly depressed. He doesn’t know what to do with this information, and decides to tweet it out to the entire town so that everyone can know about it. Which wasn’t a great call. Because now everyone in town starts treating Homer like crap, acting like he’s the dumbest person in the world. Hell, even the guys at the bar start treating him like crap, making Homer pretty despondent.

Oh, around this point we also check in on Lisa, who has been following Ralph around this whole time. She can’t put her finger on what makes him so special, until something ridiculous happens. She follows Ralph on the Ark construction yard, and watches as he goes all around the construction, surviving on his luck. She decides that this must be the answer, until Frink shows up and tells her that it’s actually just a huge mistake, and that his test is very flawed. But, he offers her ten more points if she keeps that secret, and she agrees.

Marge has decided that she needs to do something to help Homer, and tells him that she wants to help better him. And, she has a pretty decent first suggestion. She’s going to help him with his handwriting. And, surprisingly, it starts to work. He practices a bunch, and in the process, becomes more eloquent, even writing Marge some pretty sweet love-letters, proving that he has an important role in her life at least.

Oh, and we also see that Mr. Burns has brought his chosen people onto the finished Ark, but when he makes it clear that he is going to be their cruel king they all abandon him. The end! 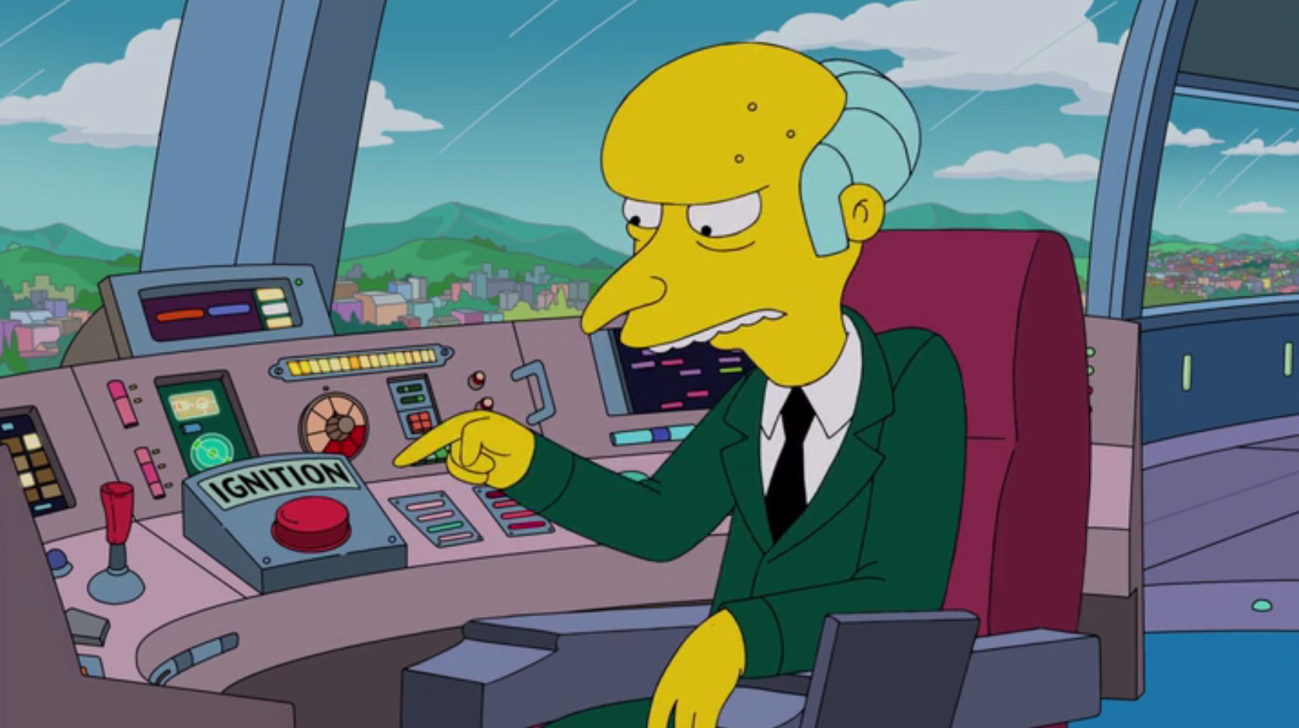 I mean, I’m not going to lie, this is a sort of disappointing episode to end things on. This episode isn’t terrible or anything, it’s just not that special. I think it’s just too scatter-brained. The idea of making everyone in Springfield take a test to show how important they are to keeping Springfield alive in the future is an interesting one, but it kind of got too fragmented. The Lisa stuff never felt very important, and the main part of the plot just feels weird when it switches from focusing on Bart to Homer. When Homer becomes the focus it’s suddenly way too late in the episode to do anything special with it, and all the handwriting stuff comes out of nowhere. It’s just way too slapped together, not really feeling like it was tight enough to have been a real episode. I don’t know. There’s some good gags, it just kind of messes up all of the plot points. We do get to hear Maurice LaMarche as Orson Welles though, that’s always good.

Take Away: We all have a purpose in life, we just need to find what it is.

“Frink Gets Testy” was written by Dan Vebber and directed by Chris Clements, 2018.

So. There we go. The Lifetime of Simpsons is complete. But, it’s not over. I plan to continue discussing every episode of the show as it comes out, until it finally does end. Which means that it will now become a weekly thing instead of a daily. This is the last article for this week, but, starting next week I have three solid weeks of wrap-up material. I’ll be talking about favorite episodes from each season, I’ll be ranking a bunch of stuff, and finally spend a week writing about each of the family members, trying to grapple with my opinions on them now that I’ve seen 629 episodes of this show. And, after that, something new will happen. But, I’ll talk about that once the wrap-up is done. For now, I’m taking the rest of the week out and look forward to wrapping everything up with you all. Tagged as: 2018, Frink Gets Testy, Lifetime of Simpsons, Season 29, the Simpsons