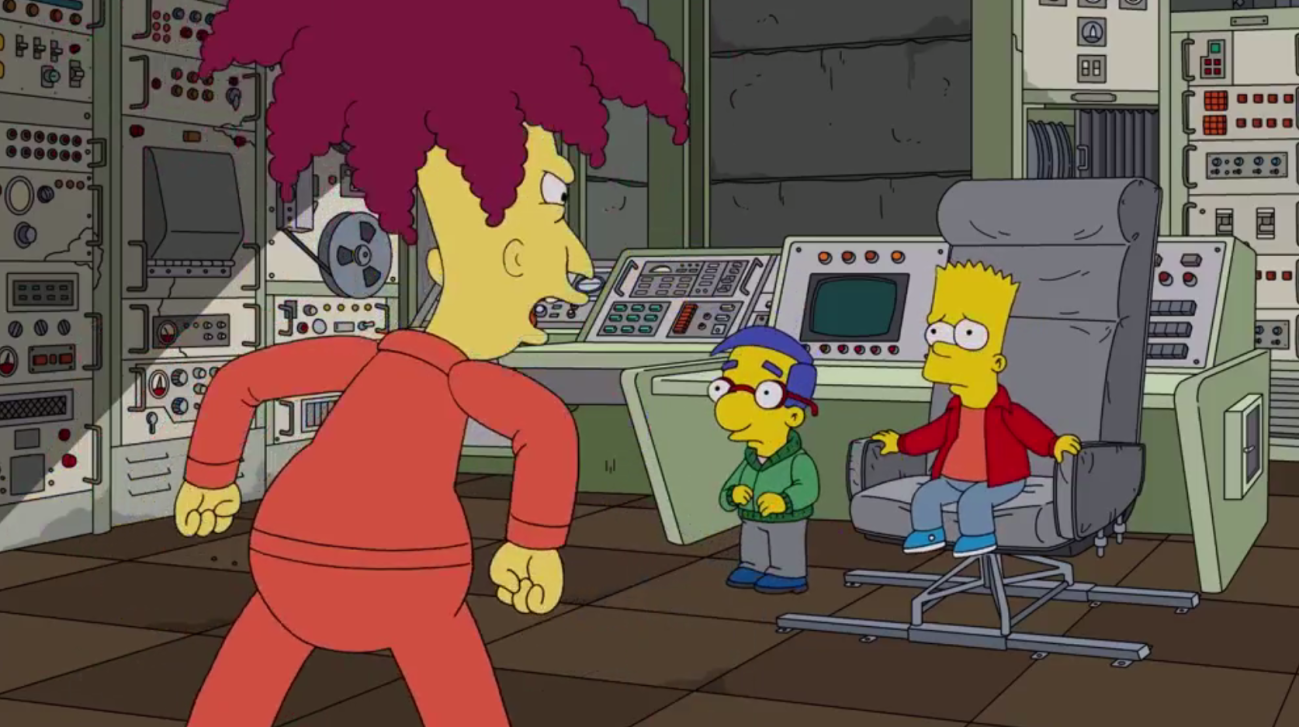 Well everyone. We’ve done it. This is the last week of Lifetime of Simpsons, at least in its current form. On Wednesday, we’ll talk about the most recent episode of the show, and then we’ll be all caught up. The show is on a brief break, and will be back in March, which actually ended up working out pretty well, letting this project reach a conclusion in a quiet period. I’ll talk more about what things will start to look like on Wednesday, so for now let’s just get ready for a nice relaxing Sideshow Bob episode.

The episode begins with a group of convicts working on the side of the highway, in a forest, cleaning up garbage. It’s not going particularly well, especially since the weather is starting to get a little rough, not to mention the futile task that is trying to clean up the side of the road. And, of course, one of these convict is Sideshow Bob, who seems to find the whole thing beneath him. But, he’s just trying to keep his head down and get the task accomplished. Which is made harder when a passing car smashes into their dumpster, tossing out all the garbage again.

And who is driving that car? Why the Simpsons of course! They’re in a rental car, returning from some sort of road trip. I’m not sure exactly where it places the events of this episode, since they’re in the middle of the goddamn woods for most of it, but all that matters is that Homer is loving the fact that he has a rental car, because he can wreck it. He’s encouraging the family to be as horrible to the car as possible, and when he realizes that he’s going to be returning the car with more gas than they got it with, he has to fix that.

Homer and Bart drop Marge, Lisa, and Maggie off at the rental place, and then get to work wasting as much gas as possible. They drive all around, goofing off, until they’ve properly gotten the gas down low enough. And, when they do that, Bart notices that he needs to pee. Homer offers to let him just pee in the car, but Bart is kind of weirded out by that, and heads out into the woods to take care of his business.

Bart finds a secluded part of the woods to pee, and when he’s done he notices something strange. A peculiar hatch on the ground, which says “DON’T JUMP ON.” So, logically, Bart jumps on the hatch. Which then promptly breaks, sending Bart careening down a shaft and into a hidden structure under the forest. Bart wakes up after a brief period of unconsciousness, and finds that he’s accidentally stumbled upon a Strategic Air Command fallout shelter, left over from the Cold War, that even has an old nuclear bomb stored in it. Oh, and there’s no way for him to get out. 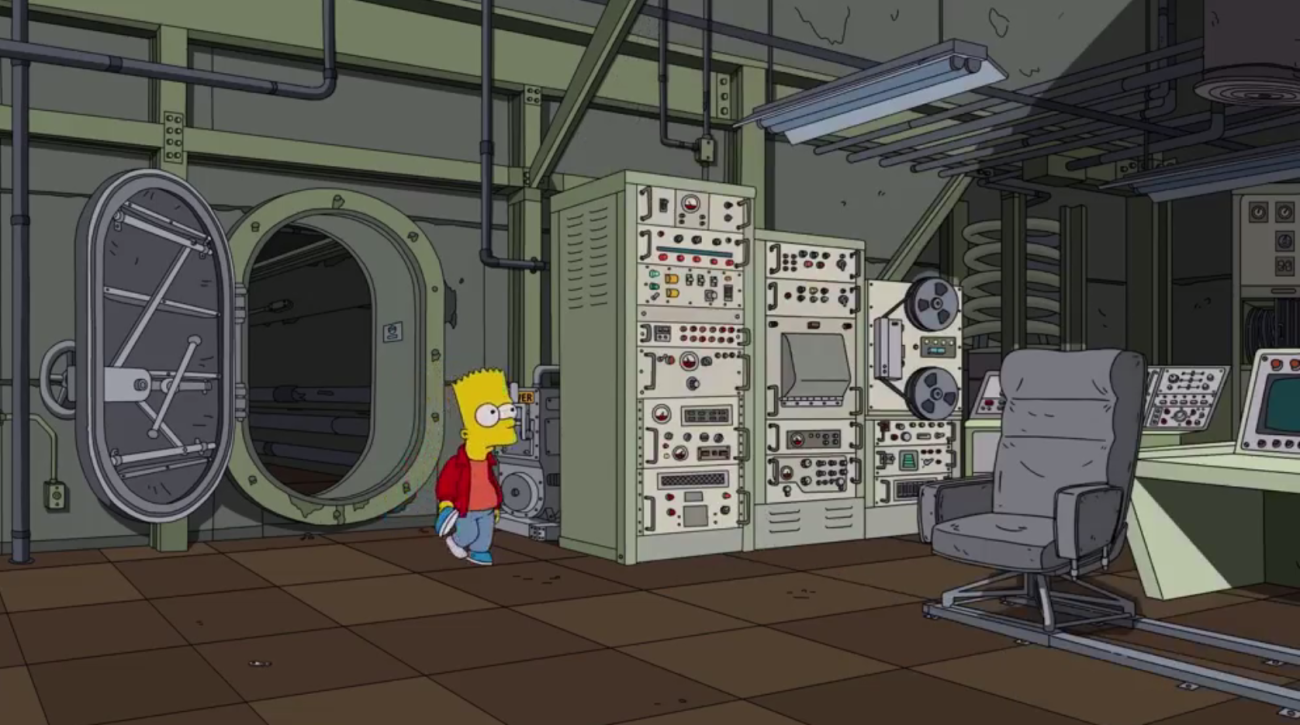 Meanwhile, Homer has realized that something is wrong, and has begun to wander around the forest trying to find Bart. And, when he finds that this is a difficult proposition, he gives up and goes and finds an adult. Homer drives back to the car rental place and tells Marge what’s going on. She has an appropriate response, and calls the police, leading to a whole group of people arriving in the forest, ready to canvas it to find Bart.

The whole town quickly rallies together to start canvasing the forest, and they seem desperate for people to help. So, since they’re still in the forest, the convicts are forced to start help. Which makes Sideshow Bob pretty nervous. He’s sure that people will start to blame him for Bart’s disappearance, because of their history, and he tries to keep that secret. Although, he also starts to decide that this would be the perfect time to try and find Bart and kill him. Mixed signals.

And while everyone is trying to find Bart, he’s exploring his bomb shelter, seeing what all it has. He eats the rations, looks through the music selection, and makes himself a fake family to talk to. He’s found that the ladder leading to the hatch has rusted away, leaving him no way out. He does find an old phone at one point, but he uses it first to prank call Moe’s, and the strain ends up trying the cord of the phone, ruining it.

But, he’s about to get a surprise visitor. Because as soon as Bart went missing Milhouse began tracking him down, desperate to find his only friend. And, surprisingly, Milhouse ends up finding the hatch in the middle of the forest. He calls down to Bart, and promises to go find him some help. He races back to the Simpson’s house, and finds the family inside mourning. And, upon seeing that, he decides to ignore his task, and be a creep. Because this is the perfect opportunity for him to hit on Lisa, trying to “Comfort” her. And, knowing that it’ll make Lisa stop caring about him, he decides to not mention the fact that he’s seen Bart alive and well.

Back in the forest, they’ve decided to call off the search for Bart, figuring that he’s probably dead at this point. So, the convicts are about to be sent back to prison, and Bob is starting to get really upset. He’s furious that Bart has died in a way that didn’t involve him, and he even has to go see a prison psychiatrist to talk about his sadness. Luckily though, the psychiatrist is kind of a dope, and Bob is able to over-power him and break out of prison so he can track down Bart and convince himself he’s actually dead. 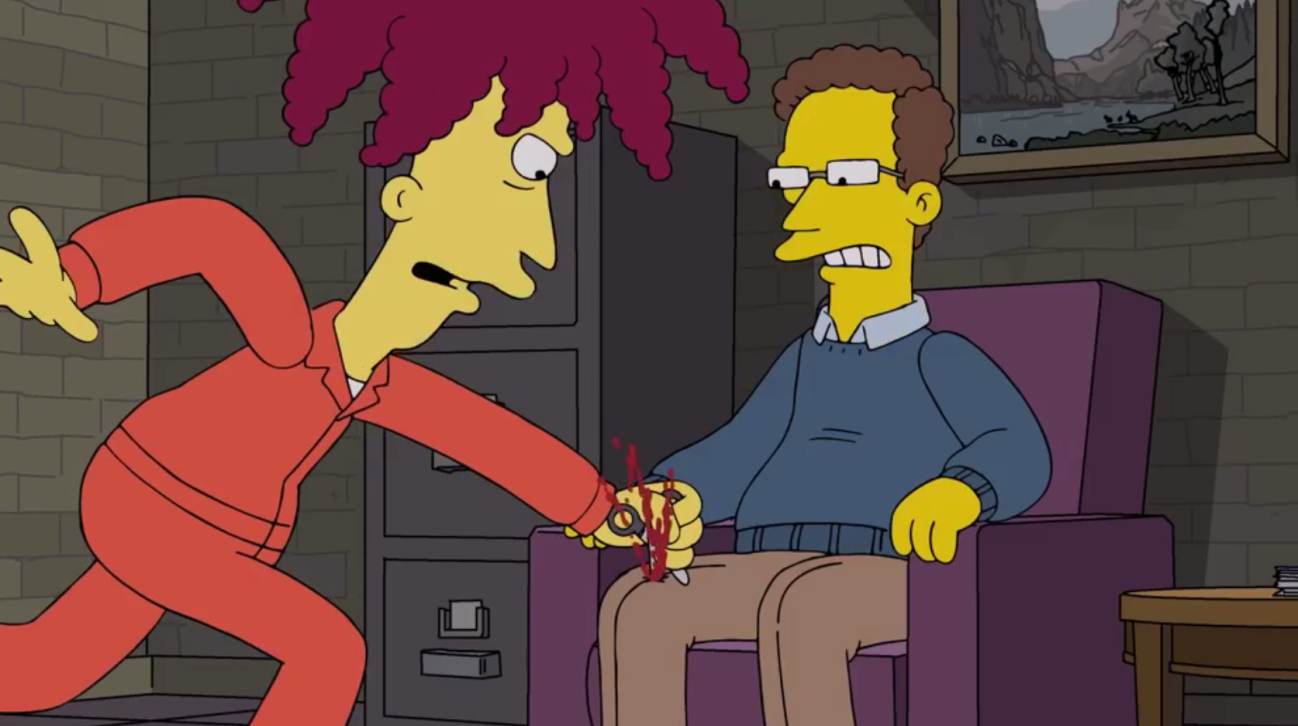 But, in order to do this, he needs a lead on Bart’s location. So, he heads over to the Simpson’s house, right as Bart manages to get that phone working again long enough to make a call to Marge. He can’t tell her much before it breaks again, but it gives Marge the knowledge that he’s still alive out there, somewhere. So, the family begin planning on how to find Bart, and Milhouse has to awkwardly leave, still not telling them the truth.

However, as Milhouse leaves the house he runs into Bob, who has been lurking outside the house. He grabs Milhouse, and starts pressing him for information. And, with the help of a little operetta singing/torture, Milhouse decides to tell Bob the truth. Bob then forced Milhouse to lead him to the hatch in the middle of the forest so that Bob can finally kill Bart. He makes Milhouse come along with him too, because why not?

Bob and Milhouse quickly find Bart inside the fallout shelter, and Bob starts intimidating the both of them. He then prepares his newest scheme, using his surroundings. He takes Bart and Milhouse, and chains them to the top of the nuclear missile, getting ready to fire them to their death. However, he finds that to fire the missile he needs to turn two keys at the same time, and it’s just far enough apart that he can’t do it easily.

But, after using his freakish feet, Bob is able to get enough stretch to use the keys, activating the missile. It opens up the larger hatch, exposing the missile silo to the forest. Bart realizes that things look pretty dire, so he decides to throw a Hail Mary. He asks Bob what his goal is here, and why he’s doing all of this. And, to his surprise, Bob realizes that he doesn’t really have a good reason, he’s just doing it all out of habit.

Bob starts to have doubts at this point, so he ends up calling that shrink that he hospitalized from earlier, and shockingly the mental health profession is telling Bob he probably shouldn’t murder two kids. We then see the rest of the Simpsons wandering around in the forest, suddenly shocked to see the nuclear missile fire out of the silo. But, Bart and Milhouse aren’t attached to it. Bob had a change of heart, and has freed them, letting the missile fly away and land in a sculpture garden where it can kill a bunch of hipsters presumably. Bob and Bart then decide to bury the hatchet, and we see that Bob lives out the rest of his days in a lighthouse, creeping out his mailman. 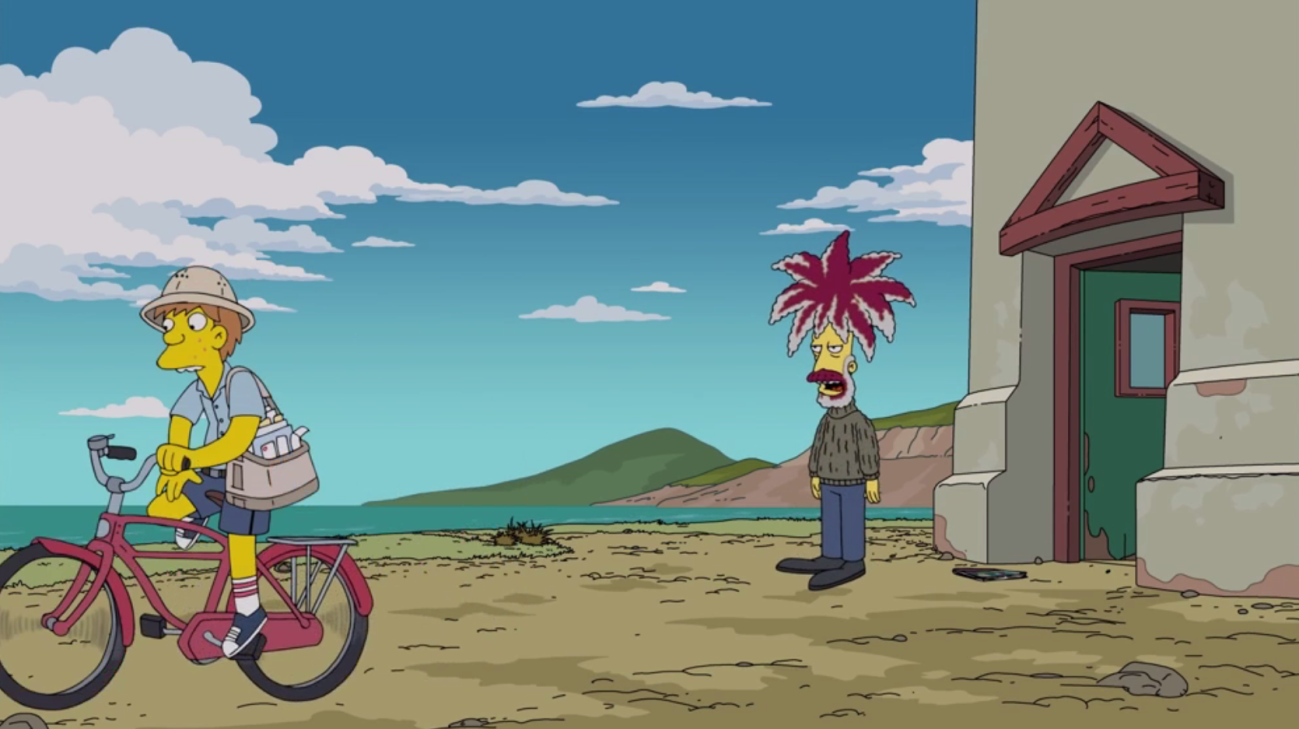 So, I guess this is the last Sideshow Bob episode? I don’t mean just for my project, obviously that’s the case, but the end of this episode seems to suggest that we’ll never see a Sideshow Bob episode for as long as the series limps along at this point. Which, I guess makes sense. They’re really done a lot with Bob, and this is a pretty fun way to have him bow out of the show. The idea that Bob had the ability to kill Bart, and presumably destroy Springfield in one shebang, and instead decided to let his murderous feeling finally die seems to indicate that Bob is a better person now. He and Bart are no longer nemeses, and things are fine now. That seems solid. Plus, we got a really fun episode from it. I really like the idea of Bart finding an old bomb shelter, and having the whole town trying to find him is a good premise. It’s a tad Timmy O’Toole, but not so much that it wrecks things. The whole idea of Milhouse being an utter creep and withholding the fact that he knew Bart was alive to score some hugs from Lisa is messed up, but other than that this is a really fun episode that I found myself liking quite a bit. If this is really the swan song of Sideshow Bob, I think it’s a fitting ending.

Take Away: It’s okay to let your grudges go.

“Gone Boy” was written by John Frink and directed by Rob Oliver, 2017. 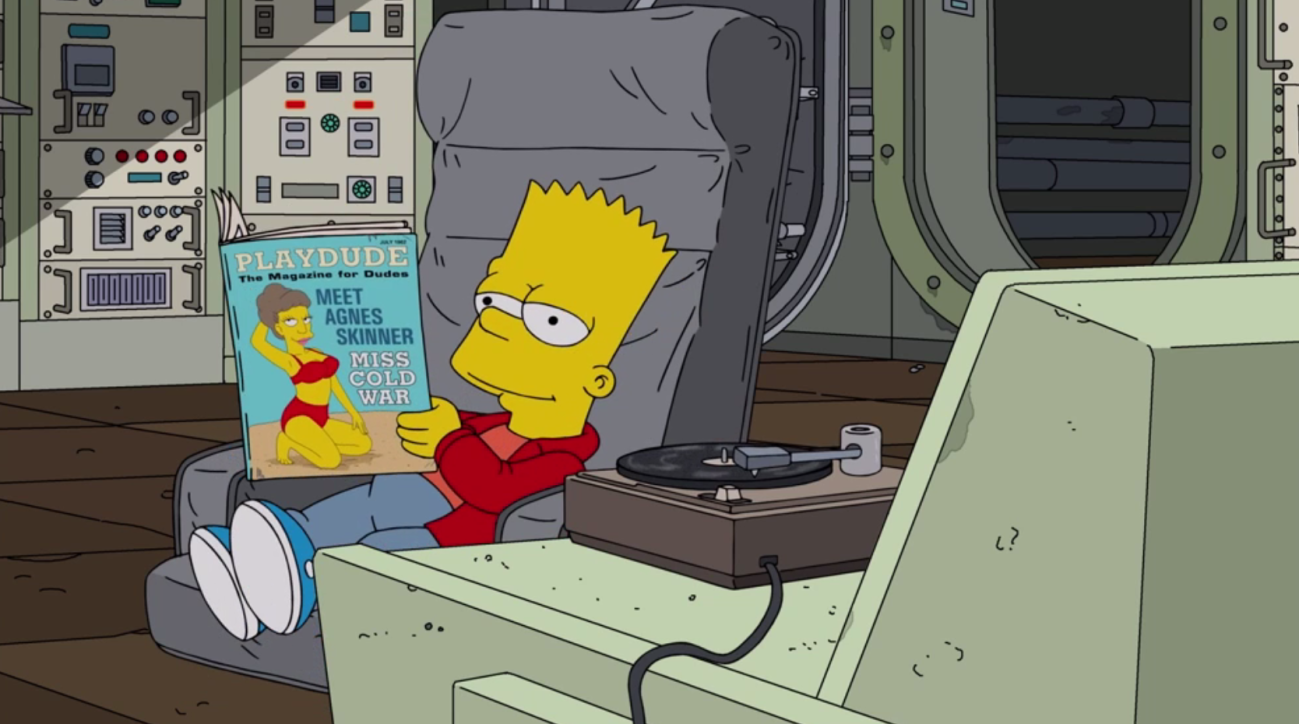