Hi there everyone, and welcome back to another installment of Bat Signal, my ongoing quest to read every issue of Detective Comics, in random order and with very little context. And we have a pretty goofy and fun issue to talk about today. We’re hopping back to the Golden Age and getting one of those stories without any of Batman’s Rogue’s, instead focusing on some actual detection and mystery. Plus, we get a bunch of weirdo’s who are in a club because they have the same last names as famous historical figures. Totally normal and rational thing to do, especially in Gotham, a city where lunatics flock to strange obsessions like that. C’mon people, if you live in Gotham you need to be on the lookout for this sort of stuff. Keep your head on a swivel.

The story begins with a cabbie driving around the streets of Gotham, noticing a pretty strange sight. A man dressed in a toga, accompanied by several other people in rather anachronistic clothes. And, to make it weirder, he notices that the man in the toga is called Mr. Caesar. He stops and asks the doorman at the building they walk into, and it turns out that this is the Namesake Club, a place where rich oddballs who have the same last names as historical figures dress like said figures, and hang out? I’m not sure. The people all just mill around, talking about the people that they probably aren’t even related to. We meet some of the people, and get refreshers on their namesakes, such as the chairman Mr. Casabianca who was a sailor whose ship exploded and vice-chairman Cook who was beaten to death by island natives. Everyone’s having a pretty nice time, until a guy dressed as Robin Hood shows up. He’s Mr. Hood, and he’s been trying to join the club for ages, but they keep denying him since Robin Hood was an alias, not an actual name. Nor a real historical figure, right? Regardless, they kick out Mr. Hood, and he starts loudly swearing vengeance. And then, later that night, this happens. 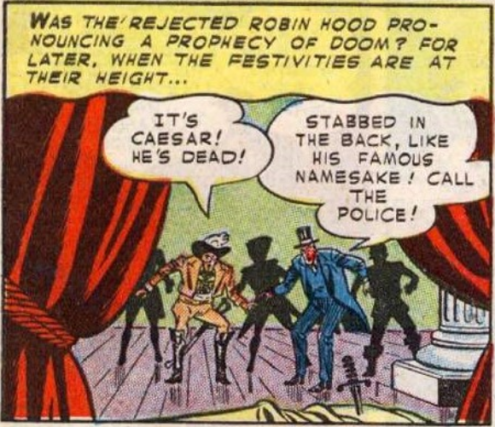 Yep, Mr. Caesar has been stabbed in the back. The members of the club call the police, and Commissioner Gordon then passes this news along to Batman and Robin. They arrive at the police station, and Gordon tells them that the obvious suspect is Hood, since he proclaimed vengeance on everyone. Batman’s not convinced, saying he needs more evidence, and as luck would have it they get a call from a Mr. Hamilton from the club, who says he has some. So, Batman and Robin head out to Hamilton’s mansion to see what he knows. Although, on the way they do notice a car speed past them without its lights on, which obviously raises some red flags. And, sure enough, when they get to Hamilton’s mansion they find him dead from a gunshot. Batman then decides that if he’s going to solve this case, he’s going to have to go under-cover. So, they head to the Batcave, and he begins crafting a new persona, Earl Warwick, named after the Earl of Warwick who was killed by a sword. He figures that this will draw out the attention of the killer.

Bruce even goes ahead and rents a fake room in a residential hotel, and fills it with artifacts relating to Warwick. He then calls in Casabianca, who is very impressed with his weird obsession to his last name. Casabianca brings “Warwick” back to the Namesake Club with him, and the other member unanimously agree to him joining the club. Bruce pretends to be thrilled, and even ingratiates himself with Arthur Moore, whose person was killed by a cannonball. Unfortunately, as they leave the club a cannonball comes dropping down on them, and Bruce and Moore barely dodge it. “Warwick” then slips into an alley and changes into his Batman costume, chasing down the killer. But, things get wrecked when Robin tries to spring into action, and is almost immediately put into peril. Batman has to give up on the killer and save Robin, which gives the killer enough time to club Cook and escape.

Bruce decides that he clearly needs to keep snooping, and decides to head back to his new hotel room to sleep for the night before going back into the Namesake Club. But, when he gets there he finds that someone had set up a crossbow to fire a sword into his chest, which he only just manages to evade. Clearly the killer is after him now too. And luckily they have a lead. Because Robin has been researching and found that Hood was a member of an archery club, whose clubhouse has been closed for the winter. They figure that they must be where he’s hiding, and they head out to find him. And, sure enough, Hood is inside and waiting for them. But, he promises that he isn’t the killer. He says that he’s been framed, and has been hiding inside the cabin in order to hide from the Namesake Club. Batman and Robin are a little unsure about this, and they still knock him out.

They do bring Hood back to the police station, but Batman’s convinced that Hood is innocent, based on the untouched snow outside the cabin. Which means they still need to find a killer, and a motive. But, Batman thinks that the answer must revolve around money, so he and Robin head out to find Casabianca to see what he thinks. And, it turns out that Casabianca lives on a yacht, and when they get to it they find another boat approaching it. Batman’s worried that this may be something to blow the yacht up, like the real Casabianca’s death, and they swoop down to save him. They succeed, and even catch the person fleeing on the boat, the real killer. It turns out to be Mr. Cook, who was planning on killing everyone, and framing Casabianca as the real killer. So, Cook is arrested, and Batman and Robin get to make lame puns.

This isn’t the strongest issue of Detective Comics that I’ve ever featured on this project, but it is pretty fun. As I’ve said, I’m a huge fan of when Batman actually gets to be the World’s Greatest Detective and do some detection, and this issue gives us plenty of that. This is one of those stories that don’t feature one of the classic supervillains, and instead features Batman and Robin actually tracking down some random criminals while exploring the vast wilderness outside Gotham City, which has oddly become something that I don’t encounter enough anymore. The whole Namesake thing was pretty ridiculous, and I have no idea why these weird people are so obsessed with their last names, especially because the implication was that they weren’t actually related to the people, but whatever, I’ve seen much weirder things in Gotham City. It’s just a really fun, if a tad forgettable, story and it certainly satisfied a detective itch.