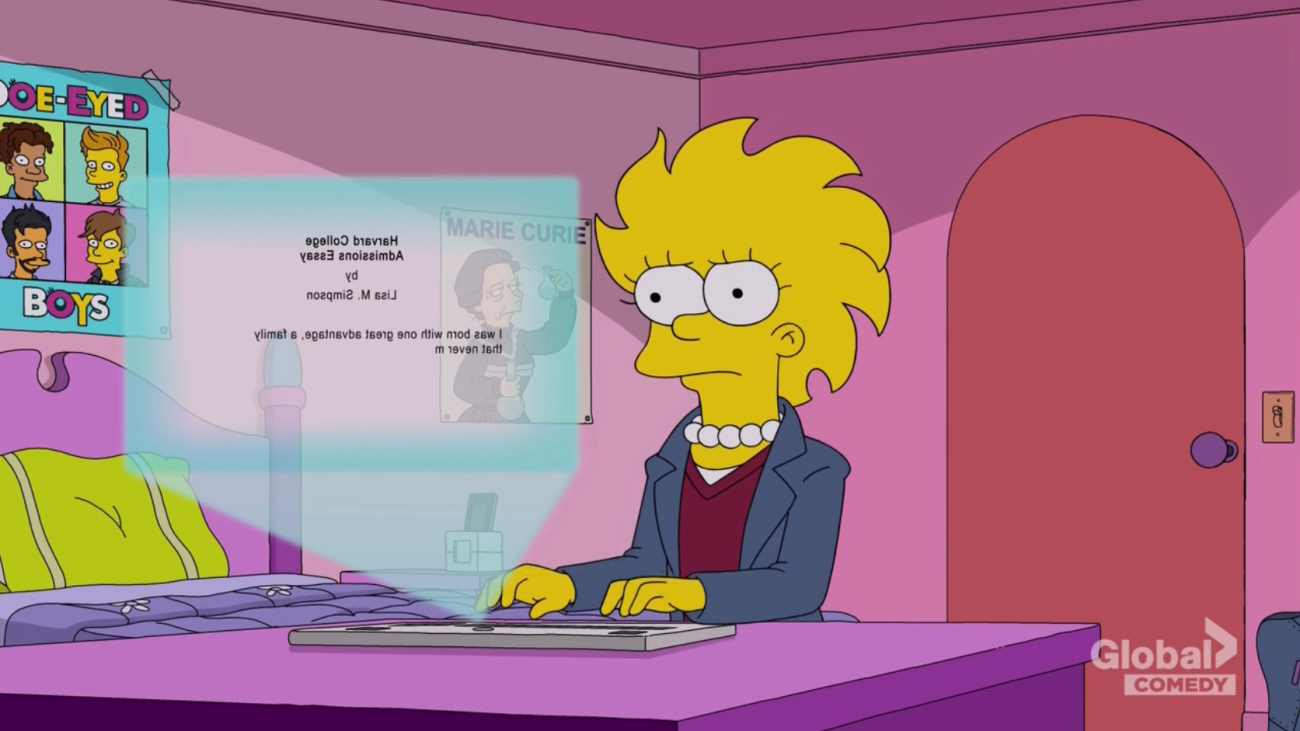 A couple seasons ago we had an episode that was a parody of the movie Boyhood, and that focused on Bart. It was a hybrid flashback, flash-forward episode, showing several different time periods in Bart’s life, and it was pretty solid. Well, today to end the week we’re going to do that again, but for Lisa this time.

The episode begins with a one-year old Lisa waking up to the sunshine, standing up in her crib and excitedly cooing and babbling to the sun. This ends up waking Homer and Marge up, and Marge decides that it’s Homer’s turn to go deal with her. So, he groggily heads into Lisa’s room, and is surprised by Lisa starting to speak to him. It’s apparently the first hint that Lisa’s going to be really smart, and Homer is very proud.

Things then jump ahead seventeen years to when Lisa is getting ready to write her personal essay for her Harvard application. She’s not sure quite what to write about, but when a twenty-year old Bart, who is still living in the house, comes to harass her, she decides to write about the somewhat difficult life that she’s had being a Simpson. And it’s mostly built around the fact that she’s had pretty terrible luck with her birthdays over the years.

This begins by looking back in on her seventh birthday, meaning we get to see the models of all the Simpsons characters a year before we normally see them. And boy have they aged poorly in a year. And, when Lisa excitedly wakes up, eager to see how her family celebrates her birthday, she’s up for a rude awakening. The family is dealing with the fact that Maggie has become incredibly fussy, and nothing is calming her down, so everyone is too distracted to even remember that it’s Lisa’s birthday. And, because she’s awkward, she doesn’t mention it to anyone and just gets sad. Lisa then starts to get really sad, and heads to school, hoping that someone there will remember that it’s her birthday. No such luck! Her first-grade class remembers that another boy has the same birthday though, and she gets to sadly watch as they celebrate him. The teacher even sends Lisa to the office for crying when no one remembers it’s her birthday too. Skinner isn’t much help to Lisa’s sadness, and doesn’t know how to help her, so he just calls Homer and makes him pick Lisa up from school.

Homer then arrives, pleased he gets to take time off from work, and he pretty quickly realizes that something is bothering Lisa. He makes a couple of guesses, but finally realizes that it’s her birthday, and apologizes for letting that slip through the cracks. He then proclaims that they’ll throw her a massive party, and he actually manages to turn the birthday around, making Lisa really happy.

But, our next jump is much darker. We then skip over to Lisa’s fourteenth birthday, where she’s woken up by Marge and Bart. Bart then sings her a new version of the “Lisa It’s Your Birthday” song, and even has Leon there to back him up! It’s really random, and Lisa appears to have lost all interest in what’s apparently become a yearly tradition. She then proceeds to have a pretty good day, getting presents from her family and from her friends at school.

In fact, she gets so many presents that she’s not sure where to stick some of them. So, for some bizarre reason, she decides to put some of them in Homer and Marge’s closet. And, while opening up the closet, she finds something upsetting. It’s a packed suitcase that has a note addressed to Homer on it. She peeks into the letter, and finds that it’s a note Marge has written when she finally decides to leave him, which is apparently impending.

Lisa freaks out about this, and tries to go talk to Marge about it, but she just blows her off. So, Lisa tries to hold her tongue, but when Homer and Marge spend most of her birthday dinner griping at each other, she knows that she’s going to need to do something. Homer then heads off to drink at Moe’s, and Lisa catches a glimpse of Marge crying in the kitchen, so she decides she needs to do something about all of this.

Since she struck out with Marge, Lisa decides to talk to Homer this time. She walks to Moe’s and finds her father getting drunk on her birthday, and she drops the bombshell on him. When Lisa tells him about the suitcase Homer begins panicking, and asks Lisa for advice. And she has a pretty solid idea. Homer should give up drinking. He’s not sure about it, but she convinces to call Ned, who is apparently Homer’s sponsor, and Ned comes to talk to him. They spend a while talking about Homer’s alcoholism, and he ends up agreeing that he’ll try being sober. Lisa then tells us that Homer remained sober, and his marriage was repaired, and it was the best birthday present she ever got.

Lisa then sends out her application, and a few weeks later she gets a message from a drone, telling her that she’s officially been accepted into Harvard. So, the Simpsons all pile into the car and drive Lisa out to Harvard, getting ready to move her into her freshman year dorm. It all goes pretty well, and Lisa suddenly finds herself on her own for the first time, not quite sure what to do. And, that isn’t helped when Lisa meets one of her roommates, and finds that she appears to be better than Lisa in every way.

Lisa kind of panics at this point, and wanders around the Harvard campus, trying to calm herself down. And, she gets solace from kind of a strange place. Bart has been trolling around for young co-eds, and runs into Lisa. She tells him about her fears, and he gives her a pretty sweet pep-talk. He tells her that all her life she’s been better than everyone else, so given enough time she’s going to find way to prove that she’s the best, because she is. And, with this confidence, Lisa throws herself into Harvard, and even befriends a second roommate, getting ready to live her best life. The episode then ends with a montage of moments from Lisa’s life until finally ending back at the beginning of the episode with Homer talking about how smart she is, and how proud of her he is.

This episode is really good. I was surprised at how much I enjoyed the “Barthood” episode, but this one really hit me, and got me pretty misty by the end. That could also be some residual emotions about this whole thing coming to an end, but I think it’s just a really strong episode. I love Lisa, and this episode is a really terrific look at her as a character. She does frequently get the short end of the stick in the family, having her thoughts and feeling sidelines by the most potent drama of the family, but this is an episode that reminds us what an important element she is to the family. She fixes Homer and Marge’s marriage, and even gets Homer sober! That’s incredible! And boy does the idea that he got sober for Lisa really get me. But, surprisingly, I think it’s the Bart stuff at the end that’s most affecting me. Their relationship has been so tumultuous, and I often really find myself not enjoying the way that their relationship gets portrayed in these flash-forward episodes. But Bart’s pep-talk is really sweet, and the idea that no matter what he has confidence in her is some seriously emotional stuff. It’s just a delightful little episode, folks.

Take Away: No matter how lost you are, you have a purpose, you just need to find it.