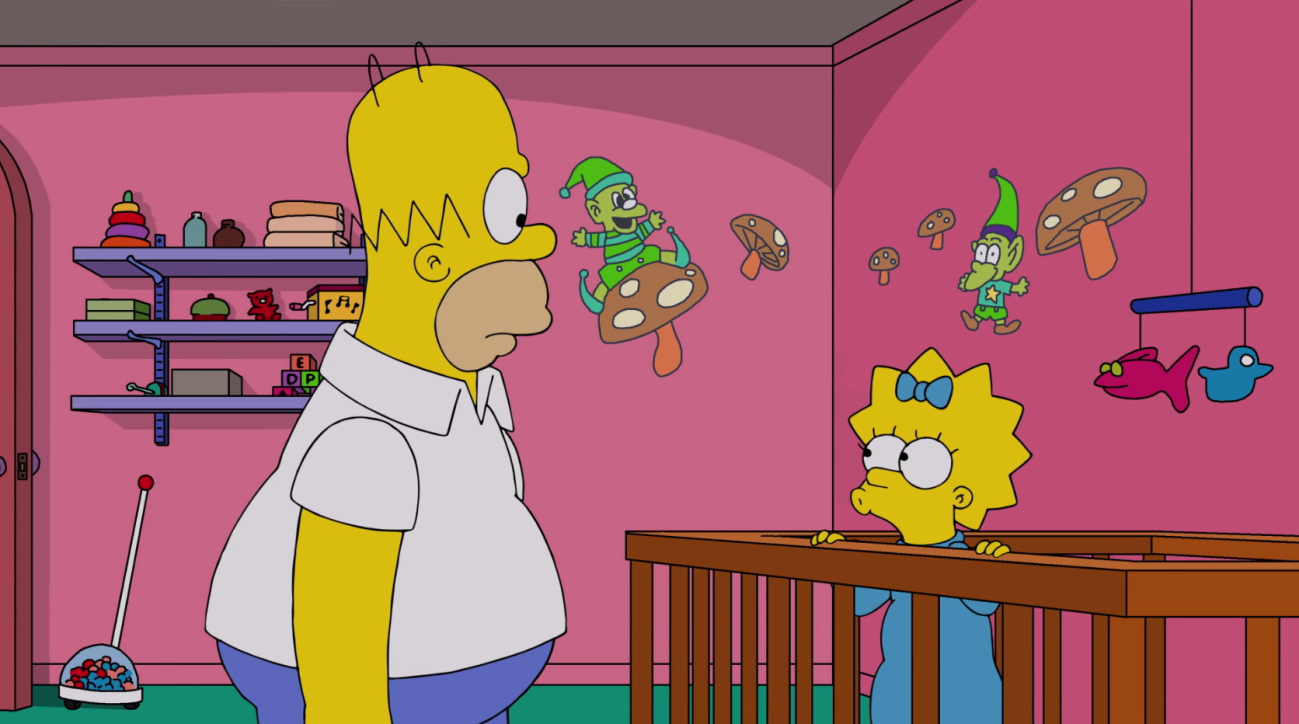 Another week of Lifetime of Simpsons is about ready to be put in the books folks. It’s honestly kind of freaking me out that there’ basically only a week and a half left of episodes, at which point things will start to change a while. But, for now we have to talk about whistling babies and the mafia’s interior decorating. You know, just another Friday.

The episode begins with Marge fretting about in the middle of the night, unable to sleep because she’s worrying about something. She ends up waking Homer up, asking him for a favor. Apparently she’s having some of her friends over the next evening to talk about the task of decorating a late pick-up area at the Elementary School, and she wants Homer to take care of Maggie so she’ll have one less thing on her mind. Homer agrees to this idea, figuring it’s the least he could do.

So, the next evening Marge starts to entertain her friends while Homer hangs out with Maggie in her room, quickly growing bored. And things aren’t going well for Marge either, because she’s having to talk to Luanne Van Houten, Bernice Hibbert, and worst of all, Helen Lovejoy. Helen quickly takes over the meeting, and leads the other two women to start mocking Marge, telling her that she has terrible taste, has done an awful job decorating her house, and shouldn’t be involved in the project. Marge then does the right thing and kicks these jerks out of her damn house.

Meanwhile, Homer is still hanging out with Maggie, struggling to find something interesting about her, when he starts to notice a strange whistling sound in the room. He looks all around, trying to figure out where it’s come from, before finding the source. Maggie! Apparently, Maggie has some sort of powerful and innate skill at whistling, and Homer immediately starts to try and figure ways to exploit that talent. And, for some reason, he thinks it makes sense to trick people into thinking that he’s a fantastic whistler, while actually having Maggie do all the work. Flawless!

Downstairs, Marge has become furious about the insults that the other women gave her and her sense of style, so she begins plotting ways to destroy them. She can’t get over the fact that they think she has bad taste, so to crush them she decides to use every last bit of creative energy that she has and design the hell out of that late pick-up area at the school. She starts designing every inch of the room, and sneaks into the school one day to pull it off before the other women know what hit them.

She ends up making an intricately themed room that’s all based on the Wizard of Oz, and it seems to be a big hit with the kids. When the other mothers arrive, they decide to not accept that though, and continue to make slight jabs at Marge, never admitting defeat. This pisses Marge off, but luckily someone shows up who absolutely loves her style. Fat Tony! He loves everything about Marge’s style, and has an offer for her. He’s just bought an old post office in downtown Springfield and will be opening it up as a club. And he wants Marge to help him decorate it. And, happy that someone appreciates her, Marge agrees.

While all of this is going on, Homer has decided to try out his latest and stupidest scam. He heads over to Moe’s, while keeping Maggie crammed inside a backpack, and shows off his new whistling skills to the guys. They’re somewhat impressed, but while Homer is taking all the credit his parade is promptly rained upon by good old Abe Simpson. Grandpa comes storming into the bar and proclaims Homer for the fraud he is.

Turns out Abe was also a whistling savant, and he knows right away that Homer is faking the whistling. Abe lets Maggie out of the backpack, and starts to show off some of his own skills. Apparently, this gift skips a generation, hence Homer’s inability to whistle, and Abe was once so good that he got to be on some sort of radio variety show. Unfortunately, while trying to pull off a flashy whistling maneuver, he ends up destroying all of his lip ligaments, destroying his career. But, now that he knows Maggie has talent he wants to help her train to be the next famous whistler in the family!

At the same time, Marge has begun working with Fat Tony, and the two go to check out the old Post Office that he’s bought. It’s an impressive building, even though everything in that part of town is being demolished, and Marge sees a lot of potential in it. It does seem suspicious that Fat Tony won’t tell her what the business is going to be, but that’s okay, she has designing to do. They start travelling all around Springfield, checking out some of the fanciest furniture and decorations in town.

Meanwhile, Abe and Homer have discovered some sort of toddler talent show going on in town, and they’ve brought Maggie to try out. It’s all run by that Chazz guy, and he’s surprisingly really interested in Maggie’s whistling abilities, signing her up for the show. They keep training Maggie, which does become a bit of a problem when she starts whistling non-stop, getting the attention of the rest of the people in the house, but that doesn’t really lead anywhere other than Lisa being momentarily jealous.

Marge has finally finished designing the old post office, to Fat Tony’s specifications, and she’s beginning to become suspicious of what this business possibly could be. It seems like a hotel, but there’s just something about it that rubs her the wrong way. And that weird feeling is confirmed when Mayor Quimby shows up, eager to see how Fat Tony’s new brothel was turning out. Whoops! Marge just designed the best little whorehouse in Springfield!

And, just on time, Helen, Bernice, and Luanne have arrived at the new brothel, eager to see what this fancy project Marge has been working on has turned out to be. And they obviously find this hilarious, and begin mocking Marge. She’s obviously furious about being tricked into doing something against her morals, and goes to confront Fat Tony. But, he doesn’t care. So, Marge decides to pull out some big and confusing guns. Turns out that this post office had a PO Box that belonged to Fat Tony’s deceased mother. And inside that box is a signed photo of the Pope. This somehow convinces Fat Tony that he did a horrible thing on hallowed ground or something, and he decides to close the place down, saving Marge the embarrassment of being linked to the place. What? Whatever.

Now that the Marge plot has reached its confounding conclusion, it’s time to focus fully on Maggie and her whistling. Because Homer has become very worried about the whole situation. He watched some sort of documentary on how fame turns child stars into monsters, and he becomes terrified that forcing Maggie into this weird talent show will make her a broken person when she’s older. There’s just one problem. Maggie loves being in the spotlight, and refuses to let Homer take her away from her fame.

Because Homer apparently can’t convince his baby to do what he wants her to do, he brings her to the talent show and starts watching Maggie’s performance from the green room. But, when it’s her big shot, something strange happens. She’s unable to whistle. No matter what she tries, nothing works, and the crowd obviously starts booing the infant on the stage. Homer rushes out to yell at the assholes who are booing a child, and tries to figure out what’s wrong with Maggie. Turns out she just sprouted her first baby tooth, and that’s apparently the death of her whistling career. At least according to Abe. So, with her career destroyed, Homer brings Maggie home to be a normal child, and he and Marge agree not to tell each other what they’ve both been up to lately.

This episode just kind of bounces right off me, to be honest. It’s not a bad episode or anything, it just doesn’t feel like anything special in the slightest. The whistling stuff is a little fun and weird, but it’s kind of just a hodgepodge of things we’ve seen. We’ve seen Homer and Maggie bonding, we’ve seen the family thinking that Maggie is a savant, and we’ve even seen Homer deal with fame from one of his daughters. It’s just a mixture of familiar elements, and it kind of became a beige Frankenstein, nothing bad and nothing good. Just fine. Honestly the weird Marge plot had some potential for a while, but then it just sputtered out into nonsense at the end. I have no idea why they would have kept the PO Boxes, why Marge would have looked inside, why there would be a letter kept there from the Pope, and why this somehow convinces Fat Tony to apologize for his wicked ways. It’s strange folks. But, I guess strange is better than bland?

Take Away: Don’t exploit your children.

Tagged as: 2017, Lifetime of Simpsons, Season 29, the Simpsons, Whistler's Father