We have a very strange episode to talk about today folks. It’s pretty clear that the most recent era of the Simpsons has not exactly been my favorite. Lots of episodes that have landed with a dull thud for me. So, imagine my surprise when I found myself really enjoying the majority of this episode, only for a veritable “Lucy with the Football” happen, punishing me for my hubris. Let’s talk about it!

The episode begins with Lisa having a pretty wild stress dream that basically revolves around her having a panic attack because she can’t remember the combination for her locker. The nightmare is enough to wake her up, and she goes to get some sympathy from Marge, since this is apparently a recurring dream that they’ve all grown accustomed to. But, Lisa doesn’t want to just be accustomed to it, and asks if the family could send her to a therapist.

But, that’s going to be a problem, because Homer says that he wasted all of the therapy that they get from his insurance. However, he has a good idea on how to get Lisa some therapy on the cheap. They’re going to go to the local community college and have one of the students try to fix Lisa! So, they head over to the college and start walking through the halls, looking at all of the weird classes that people are taking advantage of, before finding Lisa her new fledgling therapist.

Lisa begins unloading on the young therapist, telling her all of her problems. The therapist then decides that the perfect thing to fix Lisa’s issues is art therapy. And a very specific artform. She has some blank comic book panels and gives them to Lisa, telling her to draw her thoughts and feelings into the panels. Lisa thinks that this is a really solid idea, and happily takes the panels home, eager to use her artistic skills to create a comic.

There’s just one problem. Lisa is a terrible artist. She tries her best, but she’s unable to draw anything even approximating a person, and this fills her with a whole lot of shame and frustration. She has a little panic attack, knowing that she’s failing her assignment, until Marge comes in to see what’s wrong. She realizes that Lisa doesn’t have any drawing skills, and decides to give her some tips. And, in the process, she ends up drawing a really good Lisa. In fact, so good that Lisa has an idea.

She wants Marge to be her collaborator, and draw the script that she’ll write about her life. Marge is thrilled to get this deep a look into her daughter’s life, so she agrees and the two get to work. They begin scripting and drawing the comic, all while Lisa explains what school is like for her. It’s all bad food, no friends, and just a constant march of misery. Which is a bummer, but Marge does a great job at bringing Lisa’s story to life in the panels.

Eventually they finish creating this little comic, and Lisa happily returns to the therapist to show them off. There’s just one problem. The pages are missing. She lost them somewhere, and has no idea where they could have gone. And, where are they? Well, they fell out of her backpack while heading back to the college and were found by Comic Book Guy and Kumiko who were leaving. Kumiko reads the comic and loves them. In fact, she loves them so much that she decides to steal them and sell them at the Android’s Dungeon.

Lisa tells Marge about the missing pages, and they sadly walk the town, trying to figure out where the pages might have gone. And, in doing so, they walk past the Android’s Dungeon and see the ad in the window for the new series Sad Girl, which is clearly Lisa’s comic. They storm in and start yelling at Comic Book Guy and Kumiko for stealing their story, until they see a whole bunch of people come in, eager for another issue. Turns out Sad Girl is a massive success. Which means one thing.

Marge and Lisa need to make more comics! They return home and get hard at work creating a sequel to Sad Girl, dealing with all the massive hype. Luckily, Lisa has a whole lot of misery to mine from, and they’re able to craft a pretty solid sequel in time to visit the BiMonSciFiCon to sell it. They even get invited to participate in a “Women in Comics” panel with Alison Bechdel and Marjane Satrapi where they get to be interviewed about the success of Sad Girl.

Unfortunately, it quickly becomes evident that no one in the room has any respect for Marge, being a lowly artist and not a mighty writer. Everyone becomes incredibly judgmental to her, implying that she has no real contribution to the success of Sad Girl. And when Lisa doesn’t back her up, she starts to get really upset about this. It really starts to bug her, even to the point that she suggests that he write and draw another sequel to Sad Girl that’s from her perspective. 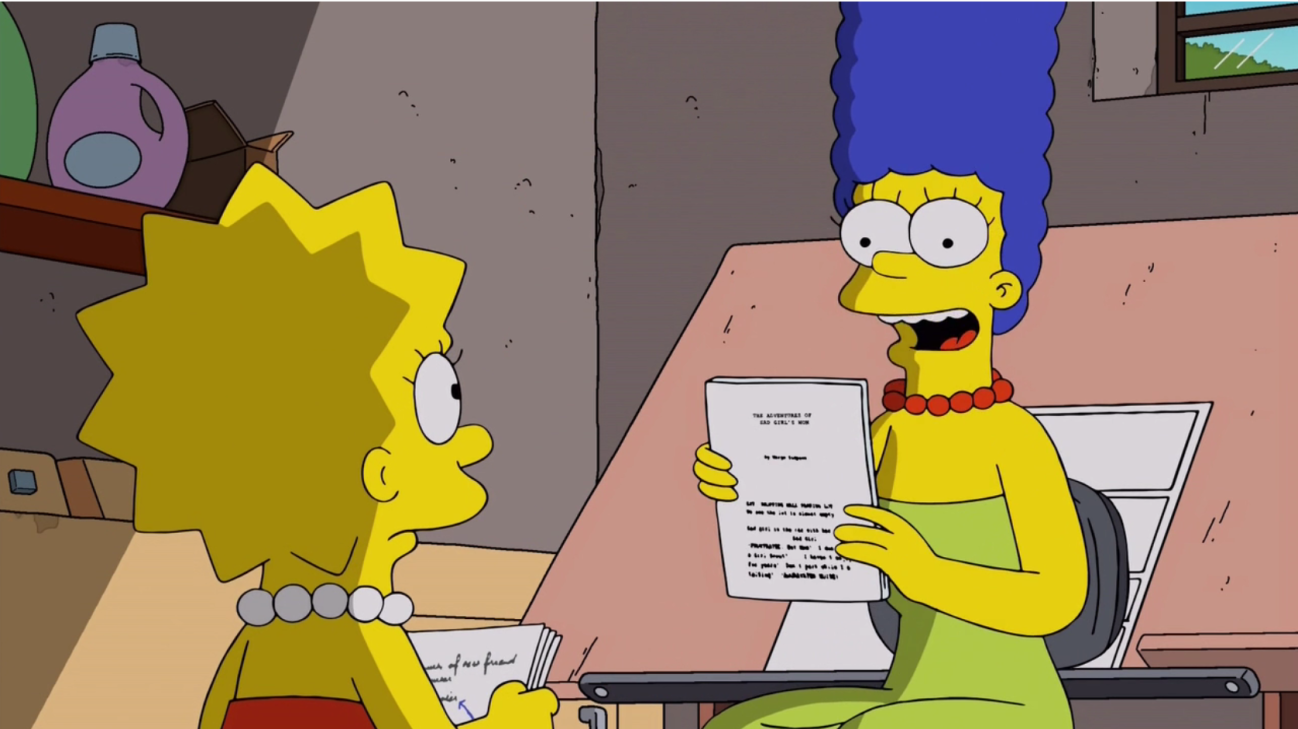 But Lisa has gotten wrapped up in her own hype, and has started feeling that she’s the more important member of the collaboration too. She shoots down Marge’s script, and even laughs at it a bit, and they end up getting into a huge fight. Things get so tense that they decide they need to take a break from their collaboration, potentially ending Sad Girl forever.

This last a couple minutes though, because when they leave their workshop in the basement they find that they have a guest waiting for them. It’s a strange man named Guthrie Fernel, a famous avant-garde theater director. And he’s here because he loves Sad Girl and wants to create a huge musical about it. Marge and Lisa love this idea, and decide to put their “break” and fight on hold, and agree to get to work creating a musical based on their comic.

However, when they actually start working with Guthrie and see his plans for the show, it’s not exactly what they had in mind. He actually doesn’t care much for the story of Sad Girl, nor the character. What he really loves is Marge’s art-style. So, he’s created a strange and abstract show that relies heavily on Marge’s visuals, and doesn’t even include Sad Girl. Lisa’s horrified by this, but Marge loves it. Finally, someone is respecting her work. And the fact that she can rub this in to Lisa doesn’t hurt either.

Lisa is furious about this turn of events, and can’t believe that someone would prefer Marge’s contribution to her own. She tries to go ask that therapist for advice, but she just gave birth and is now no help for Lisa. So, she decides that there’s nothing she can do about it, and figures that she needs to just accept it and enjoy the show for what it is.

The Sad Girl musical then begins, and it’s incredibly strange. Just a lot of conceptual dancing in big costumes and puppets. And, even though Marge kind of likes it, she starts to feel bad that Lisa is so sad, having been cut out of the show. So, she decides to throw Lisa a bone, and draws Sad Girl onto a spotlight, putting her into the story. And Guthrie hates it. He kicks the light, and ends up blinding one of the people running all of the puppet, which causes an insane sequence of events that ends with the swath of destruction, ruining the play. It closes, a massive failure, and the episode ends with Marge apologizing to Lisa, because apparently, she was the one who was in the wrong? Whatever.

This episode frustrated the hell out of me. And mostly because of that ending. For the most part, I found myself really enjoying this episode, and the complete whiff of an ending really hurt it. I love the idea that Lisa tries to find some emotional catharsis from creating comics, only to find that she doesn’t have the artistic talent to pull that off. That’s a really relatable idea, especially to someone like myself who has a lot of ideas for stories, but no artistic talent to bring them to life. And the idea to have Lisa and Marge collaborate and create a beloved comic is a whole lot of fun. I even enjoy that this episode started talking about the divide that exists in comics where people don’t respect the artists responsible for their favorite books nearly enough. Where things fall apart for me is when Lisa jumps on the bandwagon and starts treating Marge like shit, getting a swollen head. But, that kind of thing happens on the Simpsons. The kids treat the parents like shit, and then realize by the end that they were in the wrong. However, by the end of this episode we instead have Marge realize that it was in fact HER that was acting like an asshole, and she should have just shut up and ignored the fact that Lisa was taking all the credit and being a shitty partner and daughter. It’s just so strange to me. I can see that Lisa would feel bad that a story based on her life had her character written out, but it’s still insane that she can’t appreciate the fact that Marge needs some sort of appreciation as well. I’ve had a whole lot of terrible episodes of the Simpsons lately, and I kind of feel like this episode irritated me more than any of those. A lot of episodes lately have just been bad top to bottom. But this episode had so much potential, and seemed to be heading in a direction to become my favorite episode of the season, and then just threw all that promise away. And that makes it a lot harder to handle.

Take Away: The artistic teams behind comics are incredibly important and should get just as much respect as their writing counterparts. It’s a collaboration. Oh, and don’t be shitty!

“Springfield Splendor” was written by Tim Long and Miranda Thompson and directed by Matthew Faughnan, 2017. Tagged as: 2017, Lifetime of Simpsons, Season 29, Springfield Splendor, the Simpsons