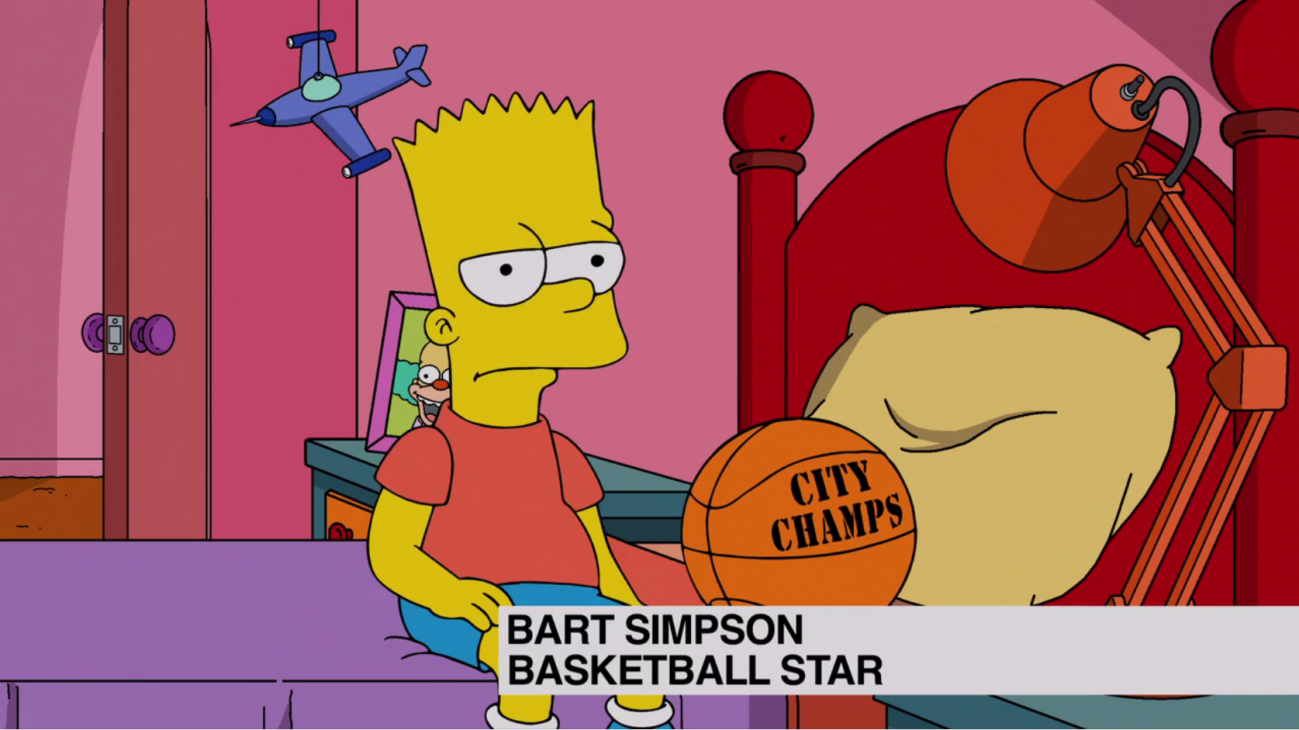 Yesterday I mentioned that this week was going to be filled to the brim with rather subpar episodes. But, there’s a caveat. Today’s episode! It ends up actually being a pretty decent episode, and really the only one of the week that I really enjoyed. Although, I’m not sure how good a job I’m going to do talking about this episode, because it’s a parody of those 30 for 30 documentaries that ESPN makes, which means that episode is structured like a documentary. Lots of gags, not a lot of plot. But let’s do this thing!

The episode starts as a parody right off the bat, telling us that this will be a story about a scandal in the world of Springfield sports. Specifically, it’s going to be a scandal that Bart is at the heart of. But, they kind of lay the whole premise out right here at the top as a series of interviews tell us that Bart became a champion basketball player for Springfield Elementary, but got in trouble for shaving points off game for the mafia. Which is a pretty ridiculous idea, so let’s see how they got there.

The episode starts tossing out a slew of interviews with everyone from sports commentators to Milhouse using a pseudonym. And they explain that it all begins with telling us about a prank that Bart pulled. He managed to get ahold of some official Elementary school stationary to put out a memo that everyone should wear white on a specific day. But, he also sent Skinner a note saying that he should wear a Polynesian shirt that day.

Everyone arrives for the fraudulent assembly, while Skinner is confused why he’s the only one wearing any color. But, as he’s trying to puzzle that out Hans Moleman arrives with a bunch of bees, who then are freed so they can swarm on Skinner, apparently getting tricked that he’s actually flowers? I don’t know, it’s a weird prank, but it’s really just there to establish why Bart was given a massive detention sentence.

Bart was trapped in detention for quite some time, and in order to deal with his boredom he started practicing his free-throws, tossing wads of paper into the trash can. And, gradually, Bart starts to get better and better. He even draws the attention of Skinner, who eventually decides that he’s going to commute Bart’s sentence and make him join the basketball team as the only competent player, now that he’s got a skill.

Bart then becomes the star player of the basketball team, completely dominating. He becomes a local celebrity, and ends up becoming a bit of a messiah in Springfield. Turns out the city has never won a sports championship at any level, and Bart’s skill may finally be the solution to that issue. He’s winning every game, almost single-handedly, and obviously starts to get a swollen head, becoming an absolute terror to work with.

And this isn’t helped when the team’s coach, Willie, has had enough and ends up quitting. So, of course, that void is filled by the perfect new coach, Homer. Homer takes over the team, and becomes even more sycophantic to Bart, letting him get away with absolutely anything. Which means it’s time for Bart to start taking advantage of him. Bart starts showboating constantly, and becomes almost impossible to work with.

Homer finally realizes that even though Bart’s helping the team, he needs to learn a lesson. So, he decides to bench Bart to show him that he needs to cut down his hubris. Unfortunately, Bart doesn’t learn that lesson, and instead becomes rather obviously furious. And, seeing that fury, Fat Tony decides to take advantage of him. Fat Tony and Bart go have some cannoli together, and he proposes that he and Bart work together to simultaneously screw over Homer, and make some money. And, Bart accepts.

Fat Tony doesn’t really explain to Bart why he’s going to be shaving points, but he does convince Bart to just keep his score at a certain level. And, Bart’s really good at it. He keeps the team winning, but also makes Fat Tony a lot of money by keeping the spread at the right level each game. Because apparently people are gambling on children’s basketball a lot in Springfield. It appears to be a match made in heaven. Unfortunately, Lisa has been put in an investigative mode, and has started to piece this deal together. Primarily because Fat Tony isn’t being subtle about it, at all. She tries to interview Bart to figure out if he’s a knowing patsy, but that doesn’t really seem to go anywhere. It almost feels like this bit was put too early in the episode by accident or something, because it has no impact on Bart playing the game, and we see him win a game that sends his team to the championship.

However, everyone starts to get suspicious of Bart at this point, especially because Fat Tony has stopped all subtly and is just openly flaunting his crimes. Unfortunately, he now wants to change things up. He wants Bart to keep shaving points, but now he wants Bart to start losing. Bart really isn’t on board with this, but Fat Tony makes it clear that he doesn’t have a choice, forcing Bart to start doing terribly at the games.

And the people of Springfield obviously start turning on Bart, immediately. And this pressure really gets to Bart, to the point that he decides to start defying Fat Tony, and decides that he wants to go back to winning. But, Fat Tony sees that and ends up paying Milhouse to tackle Bart in the middle of a game, reminding him that he needs to play ball with him. But, Bart ends up not caring about any of this, and wins the championship game, against Fat Tony’s will.

Fat Tony then decides to attack Bart, in public, until he’s stopped by Lisa. Because it turns out that Lisa has gotten some dirt on Fat Tony. And, it’s not just the crimes he was committing, it was some weird bullshit. Apparently when Fat Tony was a kid he played on an all-girl basketball team, which is apparently so embarrassing that Fat Tony agrees to just forget this whole unpleasantness, and everything goes back to normal.

This is an episode that benefit greatly from its gimmick. Usually episodes that revolve so heavily around gimmicks can feel a little tedious, but in this case I feel like the episode would have been pretty dull if it didn’t have something extra to spice it up. The central idea of Bart becoming a star basketball player only to be intimidated by Fat Tony into cheating maybe could have been interesting on its own, but I feel like it would have ended up like something we’ve seen before. However, by building the entire episode as a parody of the 30 for 30 documentaries made this a lot of fun. The various interview segments in the episode were a lot of fun, and added to the episode in a way that really saved it. I don’t think that 30 for 30 documentaries were an exactly timely reference to make in 2017, but whatever, they took a mediocre story and made it something special, which is something to applaud.

Take Away: Don’t work with the mob!