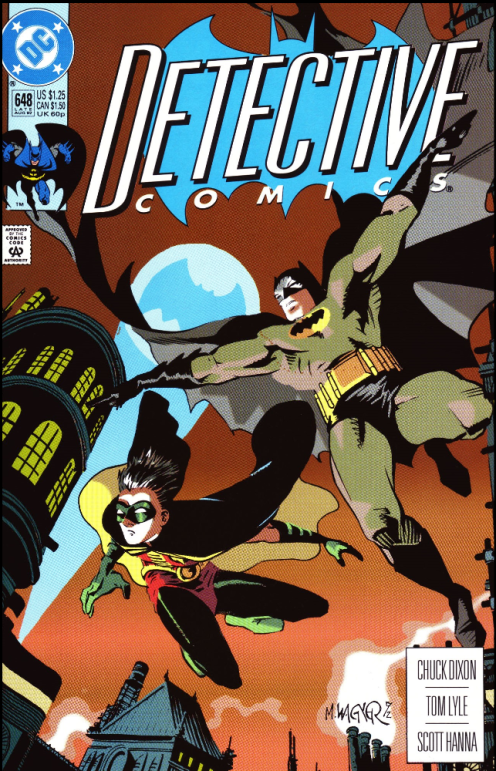 Hi there everyone, and welcome back to another installment of Bat Signal, my ongoing quest to read every issue of Detective Comics, in random order and with very little context. And we’re diving back into the oddly designed world the early-1990’s again folks. Luckily, it’s a pretty fun little issue. I’m pretty sure that this is the second part in the two-part story, which is always a little frustrating, since we aren’t getting a complete story on either side, but it’s still pretty fun. Hell, we actually get to hang out with Tim Drake, something that has barely happened during this project, and which has been a real shame. Because I love Tim Drake, and it sucks that the random number gods haven’t given us more of his tenure as Robin. Oh, and Spoiler Alert, we have another character that’s going to be introduced in this issue. One which will be very important to Tim in the future. But we’ll get to that later.

The issue begins at three in the morning while a costumed individual is painting a giant message on the facade of a building in Gotham City. The individual in question is quite clearly the character known as the Spoiler, but this appears to be her first appearance, so I guess for now it’s just a mysterious person. The giant message she leaves is “Let the Puzzlement Fit the Crime,” and it’s not the first giant message to be painted on the buildings of Gotham lately. Batman, Robin, and Commissioner Gordon have a meeting to discuss this, and try to figure out what these puzzles mean, and who could be behind them. They’ve also received “It’s Closed When Open, and Open When Closed,” “A Kind of Jam That’s Not On Bread,” and “Where Lumberjacks Go Shopping.” They aren’t quite sure what these puzzles point to, but Batman is convinced that whatever the crime is, it’s scheduled from the upcoming Labor Day weekend. And, with no real leads, Batman and Robin decide to hit the streets and get a little aggressive.

Batman and Robin end up at a warehouse where some low-level hoods are stealing VCR’s, and start beating them up until they talk. They aren’t exactly sure what they’re supposed to talk about, but when he mentions Labor Day the leader definitely knows that another criminal called Jimmy Wing has been talking about a big heist. So, Batman and Robin head over to Jimmy Wing’s Tex-Mex restaurant, which Batman finds hilarious, and beat up some of his goons until he cooperates. He tells Batman that he doesn’t know exactly what’s going on, but that he’s heard that a guy called Arthur Brown seems to be behind it. And, Batman knows who Arthur Brown is.

We’ve talked about the Cluemaster once before, but he’s a really lame villain. Basically a second-rate Riddler. But, it seems like he’s up to something, so Batman and Robin let Gordon know that Cluemaster seems to be behind the puzzles, and the police get ready to raid his apartment. Batman and Robin stand guard outside the apartment while a taskforce of police officers storm into the apartment building. And everything falls apart. The police get into Brown’s apartment, but find a dead body dressed up in his Cluemaster outfit. And, as soon as they get inside a recorded voice starts taunting them, before triggering an explosion that destroys the apartment, and almost kills the police officers. And, as the Dynamic Duo are watching the police operation fall apart, Robin notices the costumed person from the beginning running away. He gives chase, and ends up getting quite a surprise. Yep, Tim just got surprised by a pretty face and a brick to the head. She pretty quickly gets away from Robin, leaving Batman to clean up the mess at Cluemaster’s apartment. But where is the real Cluemaster? Well, he’s hanging out with his gang, planning a big heist. He hopes that the police now think that he’s dead so they won’t be following him. We also learn that he wasn’t the ones to create those messages, and isn’t working with the girl at all. In fact, they seem quite annoyed with her. So, who is she? Well, that’s just what Tim is wondering. He’s started researching Arthur Brown, and has noticed that he got several visits from a woman named Agnes Bellinger.

So, Robin decides to follow his hunch, and tracks down the address that Agnes Bellinger listed. He arrives at the small home in the suburbs, and immediately recognizes the girl from the rooftop working on a motorcycle. So, Tim stakes out the house that night, and sure enough, the girl comes out in her costume. He kind of jumps her, and after some initial awkwardness, the two get chatting. Turns out the girl’s name is Stephanie, and she’s the daughter of the Cluemaster. She hates him, and has been laying these puzzles around town to point Batman and Robin in the right direction so that they can stop his heist. The puzzles worked out to “Drawbridge,” “Traffic Jam,” and “Chopping Mall,” which end up implying a new castle-themed mall. She explains this all to Tim, and he decides to trust the girl. He brings her to meet Batman, and the three plan their assault on Cluemaster and his gang. Oh, and she reveals her call-sign.

The fact that his issue is the middle part of a larger story certainly puts this story at a bit of a disadvantage, but that’s not really something I can hold against it. The issue didn’t intend to be read in this ludicrous fashion. So, taking that out, it’s actually a pretty fun little issue of Detective Comics. Yeah, I think the Cluemaster is a completely ridiculous villain, but I guess they didn’t want to give the Riddler an anti-hero daughter, so he’s the next best thing. Because the real draw of this story is the first appearance of the Spoiler. She’s a fun character, and I particularly love where she and Tim’s relationship goes, especially in the current Detective Comics series that’s being written by James Tynion IV. So, that’s worth it. We also get a lot of Tim Drake, demonstrating why he’s my favorite Robin. He does legitimate detective work, and ends up solving a lot of the mysteries of this issue. Yeah, he’s a bit of a fashion disaster, but he’s a damn good detective, and that’s what makes me love him so much. Hopefully we’ll get more Tim soon.

“Let the Puzzlement Fit the Crime” was written by Chuck Dixon, penciled by Tom Lyle, inked by Scott Hanna, lettered by John Costanza, and colored by Adrienne Roy, 1992.