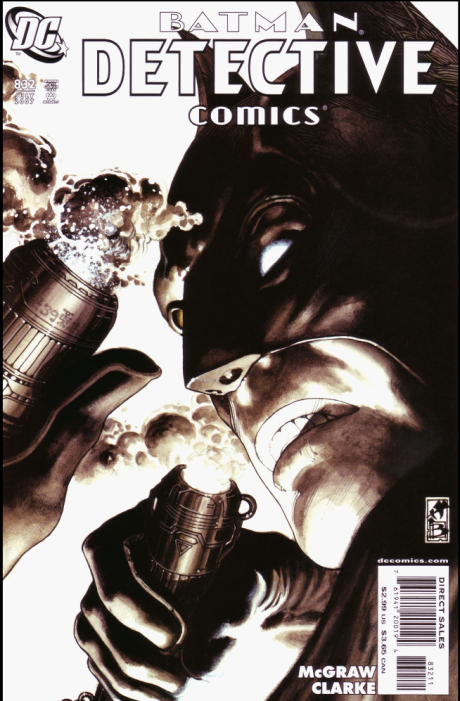 Hi there everyone, and welcome back to another installment of Bat Signal, my ongoing quest to read every issue of Detective Comics in random order and with very little context. And it looks like we’re rounding the year out with one of the most contemporary stories my random number generator has ever decided to give me, even though it’s still about ten years old. We’re also going to be crossing off another name from the ongoing list of Batman’s more famous rogues this week, even though these guys aren’t particularly well-known or loved. Because this week we’re talking about the Terrible Trio! And, if you’re unfamiliar with these villains, don’t worry, because this issue seems convinced that the average reader would have absolutely no idea who they were, and spends a chunk of the story trying to catch us all up.

The story begins with Batman arriving at one of Gotham’s harbors where a bizarre crime scene is waiting for him, along with Commissioner Gordon. The harbor contains a couple model pirate ships, including mannequin pirates, and some recently fed sharks. Gordon is watching over the mutilated body of someone that Batman has dealt with in the past. Sherman Shakley, also known as the Shark. He’s even wearing his shark mask, which helped a bit in his identification, since the body is too destroyed to properly identify. Well, except for the fact that it appears Shakley’s teeth have been pulled out of his skull, which Gordon and his men found and were able to link to Shakley. So, someone has tortured and killed the Shark, and murdered him as if he’d had a pirate burial at sea. Which certainly makes this a case strange enough for Batman.

Bruce then returns to the Batcave, and begins trying to puzzle this whole thing out. He also refreshes us on who the Terrible Trio were. Basically they were three people with criminal obsessions who banded together and wore animals masks that correlated with their fixations. The Shark committed sea crimes, the Vulture committed air crimes, and the Fox committed crimes of the ground. The Trio has apparently been disbanded for a while now, and Bruce assumes that if someone went to the trouble of brutally killing the Shark, they won’t stop with just him. Gordon apparently has the Vulture in custody, which leaves the Fox in the wind. And, if he has any hope to find the Shark’s killer, he needs to find the Fox.

Batman assumes that the Fox will return to his previous obsessive mania, and will be committing ground-based crimes again, and manages to track the man to an abandoned subway station that for some reason has a bunch of sculptures as if it was ancient Rome. It’s not really explained. But, it was a good guess, because Batman does indeed find the Fox there, apparently hiding for his life. The Fox is terrified, and he begins telling Batman everything he knows. This killer calls himself The Fourth Man, and he’s been trying to kill the members of the Trio for some time. He’s tracked them all across the country, chasing them from all of their hideouts. Which worries Batman, because if this guy is such a good tracker, why hasn’t he found the Fox? Well, it turns out it’s because he has, and he’s just laying in wait. And, as soon as Batman appears to realize that there’s something fishy about this situation, the Fourth Man reveals himself, and says that he’s sentencing them both to death. And, just like how he fed the Shark to sharks, he’s going to have Batman and the Fox killed by a pack of hungry dogs.

Yep, Batman has to fight dogs. Which he handles pretty easily. The Fox doesn’t do that well, but Batman is able to save them both. Which doesn’t really make the Fourth Man happy. So, he triggers some dynamite, and destroys the station, hoping to kill both men. Unfortunately, he fails at that too, and both Batman and the Fox live.  Batman manages to escape the rubble, tells Gordon about the Fourth Man, and gets some bad news. Turns out that the Vulture has been kidnapped from police custody, presumably by the Fourth Man. So, now Batman has another villain to go stalk. But, he has an idea. Since the Fourth Man killed the Shark in a burial method involving sharks and he tried to kill the Fox with a Roman custom of burial involving dogs and foxes, he figures that that Vulture will be killed in a burial involving vultures. And there’s only one place in Gotham with that many vultures.

Batman then gets to the Gotham City Aviary as quickly as possible, and it turns out his guess was right. Because when he gets there the Fourth Man has the Vulture strapped to an altar, and is preparing to have a flock of vultures rend him to pieces, which is apparently how the Zoroastrians dealt with death. The Fourth Man then releases the vultures, and they begin to eat the Vulture, until Batman bursts in and scares them off. Which means it’s time to wrap up this whole little mystery. Because it turns out that Batman has figured everything out. The Fourth Man is actually the Shark. He faked his death, pulled out his own teeth, and is trying to kill his former partners. Why? I’m actually not sure. I think something about how he’s become a drug addict, and that made him dissociate from his former life? I don’t know. But Batman’s able to easily beat the Shark one-on-one, and he arrests him. The Shark is then sent to Arkham, along with Fox and Vulture, where he finds that he’s now not the only shark-themed villain in the asylum, and he presumably gets beaten up by Warren White, the Great White Shark.

This issue was just kind of passable. There wasn’t anything particularly horrible about it, but it just didn’t have anything that made it very special either. I think the Terrible Trio are kind of ridiculous villains, and the fact that this series hasn’t hit upon an of their stories until now wasn’t exactly something I was lamenting. But to have a whole issue where a mysterious fourth member was enacting revenge on them, only to be revealed to just be one of the Trio? That’s kind of disappointing. The basic premise was pretty fun, and I liked the three burial methods being used as the method to kill the Trio, but it all just falls apart at the end. If they’d actually had the Fourth Man be a fourth person it honestly would have been a pretty fun story. Sure, even without the unnecessary twist there would have been a lot to this story that didn’t make a whole lot of sense, like the weird subway station/Roman art gallery, but it would have been more fun than it ended up being. Oh well, you win some you lose some.

“Triage” was written by Royal McGraw, penciled and inked by Andy Clarke, colored by Nathan Eyring, and lettered by Travis Lanham, 2007.