Hi there folks, and welcome back for another week of Lifetime of Simpsons. And, we’re in for another week of passable episodes. We’re nearing the end of this project folks, and it seems like the ship is really running out of steam. But, at least we really get to talk very opening about Mr. Smithers’ sexuality. That’s neat.

The episode starts right off with Mr. Burns and Smithers inside of a plane, getting ready to skydive. They’re all suited up, flying through the air, and Burns is ready and raring to go. He jumps right out of the plane, and promptly passed out. Which means that Smithers is going to have to dive out of the plane and race toward Burns so that he can grab him around the waist and trigger his own parachute to save them both. Things are starting off with a bang!

Smithers and Burns made a fairly graceful landing, which is when Burns wakes up, and promptly decides that he accomplished this wonderful thing all on his own, no thanks to Smithers. But, during the landing, Smithers suddenly has an overpowering urge to finally tell Mr. Burns how he feels. He attempts to say that he loves the twisted old man, but Burns just cuts off Smithers’ proclamation with a string of insults, rubbing dirt in Smithers’ wound.

Smithers is then very depressed and we suddenly get to see Mr. Smithers pull off a sudden musical number where he heads back to Plant and begins walking around, singing about his loneliness. He sees how most everyone else in the Plant has love, and doesn’t know how to get some for himself. So, because he’s sublimating some internal anger, he decides to let it out on the next people he sees. And, unfortunately, it’s Homer, Lenny, and Carl.

Smithers yells at the guys, and tells them they have to go clean and maintain some sort of turbine inside the Plant. And, as you may have assumed, it doesn’t go well. They spend a whole lot of time working on the turbine, and when Smithers comes in to check on them it just ends up breaking and causing a whole lot of structural damage to the Plant. So, they’re going to have to spend hours working on this all again, earning them a lot more anger.

But this isn’t all about Smithers. There’s also a funny little B-Plot, and it all starts at the Elementary School where Skinner and Chalmers (for some reason) are auditioning kids for a stage adaptation of Casablanca that the children will soon be tackling. Lisa gets up on the stage to try out for the role of Ilsa, and actually does a great job, earning her the role. Which means that Milhouse needs to try and get the Rick part, earning him a stage-kiss from Lisa. Unfortunately, right as Milhouse auditions and is about to get the part some new boy named Jack, who looks and talks like Humphrey Bogart shows up, and easily snatches the role from Milhouse, sticking Milhouse as the understudy.

Back in the A-Plot though, we see that Homer and the guys have finally finished their terrible task and go to Moe’s to complain about how irritated they are. They’re furious at Smithers, and decide that his whole problem is that he’s lonely. So, to fix Smithers they’re going to find him a boyfriend. And, because Marge is for some reason at the bar too, and she comes up with a terrible idea. They’re going to go on Grindr, find a bunch of local gay guys, invite them all to a party along with Smithers, and hope that some sort of the Bachelor thing will happen.

Before we see how that pans out though we need to check back in on Milhouse and his quest to overthrow Jack. But, things get immediately crazy, because Bart recommends that the perfect way to fix the situation is to hire the bullies to beat Jack up. Unfortunately, it turns out that Jack is a great fighter, and easily takes down all three bullies. Luckily though, Skinner sees the beating, and uses it to take Jack off the show, and puts Milhouse in his place. There’s just one problem. Milhouse is a terrible actor, and his incompetence quickly starts to drive Lisa crazy, defeating his whole purpose of doing the play.

Anyway, that’s going away for a while. So, it’s time to check back in on Homer and Marge, who are ready to throw their big gay party. They have all sorts of guys over to the house, and eagerly await the arrival of Mr. Smithers. And, when he gets there, he’s not pleased. He immediately sees what Homer is trying to do, and is pretty offended that the guys assumed they could just get him a date and he’d be a happier person.

However, it works. Because as Smithers is sullenly walking around the party he ends up chatting with Julio, who is bartending, and they pretty quickly hit it off. And when Julio uses some chiropractic skills to fix a kink in Smithers’ back, he’s very interested. So, the two begin dating, and Smithers actually does seem to become much happier in his life.

But, the more time that Smithers begins spending with Julio equates to less time spent with Mr. Burns. And Burns is not happy about that. He starts to get jealous that Smithers isn’t waiting on him hand and foot and ends up confronting Smithers about it. But, Smithers really doesn’t care about this anymore, and he ends up quitting, leaving Burns without an assistant. He does briefly try to have Lindsey Naegle be his new Smithers, but she’s not down with all of Burns’ rampant human rights violations, and it doesn’t end well.

Smithers is happy though! He and Julio really start moving their relationship forward. There’s just one small problem. Smithers just can’t stop talking and thinking about Burns. So, Julio decides that they need to do something extreme to push Burns out of his mind. They’re going to have a fun vacation to Cuba to visit Julio’s family! Unfortunately, when they get there Smithers finds that he still can’t stop thinking about Burns. Julio then gives him an ultimatum, and Smithers isn’t able to live up to it. So, the two end up breaking up, and Smithers returns to Springfield.
Oh, but we have to finish off the Casablanca plot. Because Lisa is now furious at Milhouse, and is quite worried that he’s going to ruin this whole play. But, Marge has an idea. She tells Lisa that she thinks men can become better if they have someone who believes in them. So, Lisa is going to start pretending that she’s confident in Milhouse in the hopes that he’ll be better. And, when the night of the show begins, it pays off. Milhouse does a great job, and everyone loves the show. Lisa is stunned that this scheme worked, and congratulates Milhouse. But, it turns out that this was actually Jack wearing a Milhouse mask, doing the Rick part. Why did this happen? Was Milhouse cool with it or did Jack attack him and steal his identity? No clue! Story over!

Which means that it’s time to wrap up the A-Plot. Because Burns is not coping with the loss of Smithers well. He asks his lawyers for advice, and they make it clear that he needs Smithers back and should be willing to give him anything he asks for to accomplish that. So, Burns and Smithers have a dinner, and it turns out that they’re both ready to reunite. But, before Smithers will accept that, he says that he wants the truth about why Burns wants him back. So, Burns gives him a performance review, and says that he’s truly excellent at everything he does. And apparently that’s enough. They’re a team again!

So, I think that other than the fact that this was an episode that really got to the heart of Smithers’ sexuality and gave him some actual depth, this episode isn’t one that I’m going to really remember. We see Smithers and Burns fall out occasionally, and this one isn’t exactly breaking new ground. I do like that Smithers got to have an actually fulfilling relationship for a little bit, but it’s weird that we have yet another episode where the Simpsons try to fix a minor character up by staging some sort of elaborate reality show gimmick. I don’t know, there’s nothing really objectionable about the primary plot, there’s just not much that makes it stand out. That B Plot is pretty fun though. And, I would love to see a staged version of Casablanca. Possibly even done by children, because that would be hilarious.

Take Away: Don’t get wrapped up in toxic relationships. Don’t be like Smithers.

“The Burns Cage” was written by Rob LaZebnik and directed by Rob Oliver, 2016. 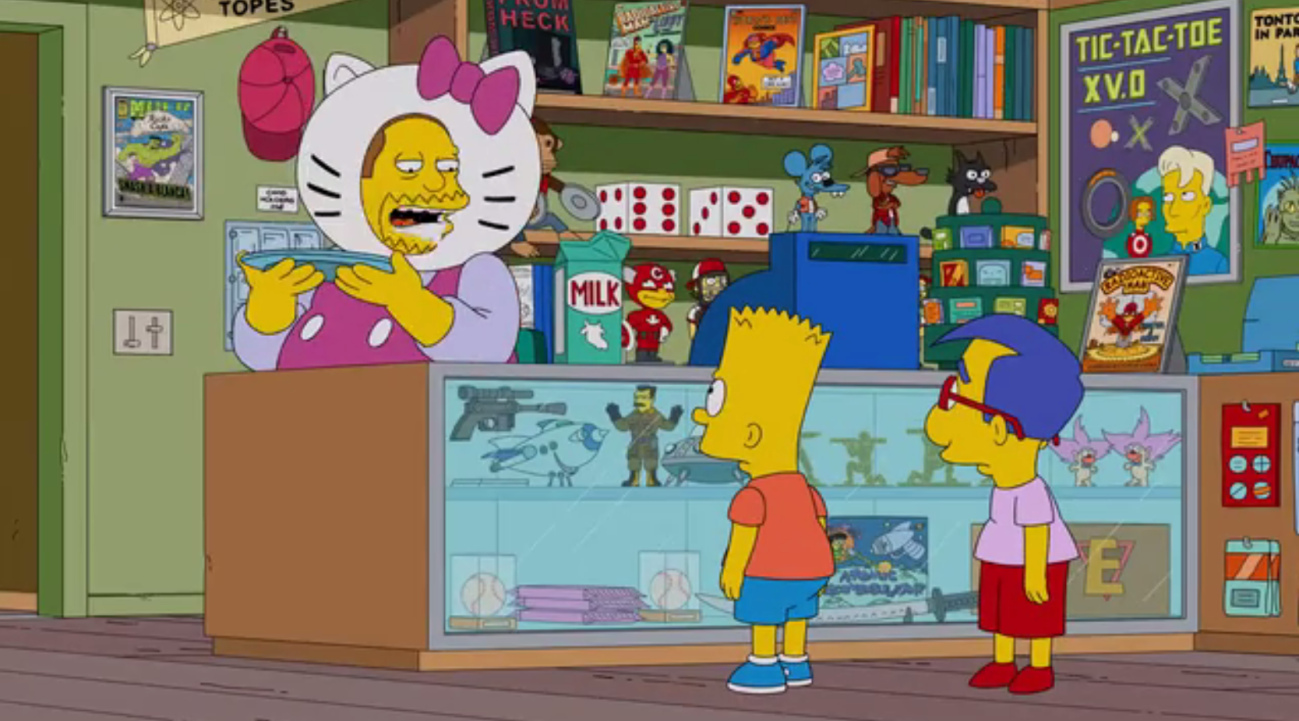 Tagged as: 2016, Lifetime of Simpsons, Season 27, the Burns Cage, the Simpsons