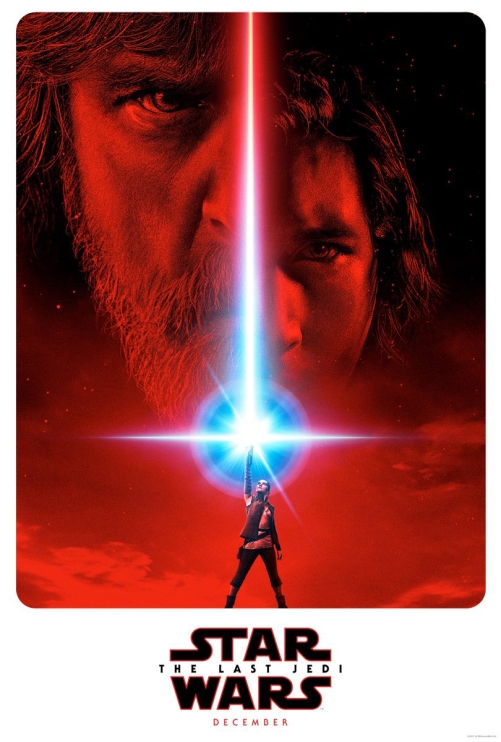 It’s the holiday-season, which only means one thing. It’s time for another entry in the new sequence of Star Wars films! And, since it’s an odd year that means it’s time to dive back into the saga of the Skywalkers with a new Episode. And, let me just tell you, I’ve been massively excited for this film. As I’ve said on this site, I was a big fan of The Force Awakens, despite it’s rather odd choice to essentially remake the plot of A New Hope. Hell, I even more or less enjoyed Rogue One, although I will note that I’ve still only ever seen it once, and really haven’t had a strong desire to remedy that in the year since it was released. So, with a very solid affection for this new era of Star Wars films, I was always going to be excited for a new one. But, when you tell me that it’s going to be written and directed by Rian Johnson, one of my favorite modern filmmakers, my excitement couldn’t have been higher. Plus, when all of the early reviews started to come out it was getting unanimous praise, being hailed as one of the best Star Wars films yet, and a true masterpiece. Hell, Disney seemed so pleased with his film that they handed him his own trilogy, giving Johnson the keys to the future of the franchise for the foreseeable future. I’ve seen that there’s a contingent of people who have been incredibly disappointed with this film, feeling that it was a bit of a disaster. But, I’m not one of them. I loved this film, and it’s seriously one of my favorite movies from this year, and will go down as one of my favorite films of the series.

The Last Jedi picks up shortly after the events of The Force Awakens, with the members of the Resistance fleeing from the vengeful First Order who are seeking revenge for the destruction of their Starkiller Base. The Resistance have piled into just a handful of ships, and are attempting to flee when the First Order’s massive fleet arrives, ready to destroy them. Our heroes are able to jump into lightspeed, but are horrified to find the First Order has managed to follow them, apparently being able to track them. And, they don’t have enough fuel to jump many more times, so they’re left with a drastic choice. They’re going to have to flee, staying just out of range of the First Order’s heavy weapons, seemingly with no other plan. Which isn’t helped when a group of First Order soldiers, led by Kylo Ren, attack the ship, and grievously wound General Leia. Ace pilot Poe Dameron wants to lead a daring assault on the First Order, hoping to strike them down, but the acting leader of the Resistance, Vice Admiral Holdo, refuses, and seems determined to keep the Resistance running scared. But, Finn and a Resistance mechanic named Rose have a plan. They think they can sneak aboard the First Order’s flagship and disable the device that’s tracking them, letting the Resistance jump to freedom. They’re just going to need to find a way onto the ship, which will require someone skilled in breaking through First Order codes. Luckily, they know of a code-breaker living in a ritzy city known as Canto Bight, so Finn and Rose head out. They’re unsuccessful in finding the code-breaker they were seeking, but they do come across a rather shady man called DJ who helps them escape Canto Bight, and promises to help them board the First Order ship and destroy the tracking device.

While all of this is going on we see that Rey has arrived at the hidden island where Luke Skywalker is living, in the hopes of convincing him to join the Resistance and defeat the First Order. Unfortunately, Luke is much more curmudgeonly than she expected, and he refuses he help or train her in the ways of the Force. Luke has been utterly disappointing by the Force and the idea of the Jedi after the fall of Ben Solo, and he refuses to go down that path again. But Rey doesn’t give up, she continues trying to convince Luke, and eventually does get him to teach her a bit about the Force, but primarily to explain to her that the Jedi don’t make sense anymore. He does tell that she’s very strong in the ways of the Force, especially when she begins having strange conversations with Kylo Ren, all through the Force. Luke tries to convince Rey that Kylo Ren is past the point of no return, but Rey swears that there’s still good in him. So, she leaves the planet, and comes right to Kylo Ren, who is aboard the First Order flagship, along with his master Supreme Leader Snoke, his master. Rey arrives on the ship, and is immediately brought to Snoke, who begins taunting her and promising that Kylo Ren will never change to the side of good. However, Kylo Ren ends up killing Snoke, seemingly defying that proclamation. Until he then informs Rey that he plans on taking over the First Order, and becoming their new dictator.

However, Rey is saved when Vice Admiral Holdo decides to do something extreme. Finn and Rose end up failing in their quest, and are almost immediately captured by the First Order when they arrive on the ship, so their plan is a failure. But, it turns out that Holdo had a better plan. They’re approaching a secret, uncharted planet, and every person on the Resistance ships are going to board escape vessels, and slip away unnoticed while she jump into lightspeed directly into the First Order ship, destroying most of it. In the confusion Rey escapes, and the surviving Resistance soldier make their way down to the planet of Crait. Finn, Rose, Poe, and the rest of the Resistance then prepare for battle, because Kylo Ren plans on storming Crait and killing every last member of the Resistance. They end up trapped in a base, and it seems like death in inevitable. When something happens. Luke Skywalker show up, and confidently strides out of the base. Kylo Ren panics, and orders the Walkers to destroy him, which does nothing. So, Kylo Ren approaches Luke, ready to fight him, only to find that Luke isn’t real. He’s a projection being made through the Force by the real Luke, who is still on the island after having a heart-to-heart with the Force Ghost of Yoda. Although, this effort does cause Luke to die and become one with the Force. Luke was just letting stalling while Rey could land on Crait and save the rest of the Resistance. So, the paltry few survivors board the Millennium Falcon and fly off to safety, hoping that the legendary return of Luke Skywalker, and the humiliation he gave the First Order will be the park that ignites a whole new Resistance that will burn down the First Order.

I loved this film. It was one of the most inventive, beautiful, and enjoyable Star Wars films, and almost everything that it did ended up working perfectly for me. Now, I will say that there are some parts of the film that seem a littler superfluous, primarily everything that occurs on Canto Bight, but the character development and world-building that those scenes add make up for the fact that narratively they aren’t exactly integral. And, really other than some minor quibbles, everything in this movie worked for me. The performances were across the board terrific, but I particularly loved Daisy Ridley’s continuously great performance as Rey, Mark Hamill’s hilarious and powerful turn as the aged Luke Skywalker, Kelly Tran as the eternally optimistic Rose, and oddly enough the wonderfully comedic Domnhall Gleeson as General Hux. But, really, everyone was great in this film. It perfectly balanced humor, operatic drama, and wold-ending stakes in a seemingly impossible way, and it all comes together to deliver one of the most interesting and engaging entries to the Star Wars saga that manages to prove the validity of the sequel trilogy while also showing the vast directions that the story can go from here.

Because, when you get right down to it, the Last Jedi is all about stories. Throughout the film Rey is trying to convince Luke Skywalker that he’s the greatest hero that the galaxy has ever known, and that they need him to succeed. But, time and time again Luke tries to explain to her that that’s just not the case anymore. His legend has outgrown him, and he’s recognized that fact that he isn’t a galactic messiah. He’s fallible, and therefore doesn’t see the point in even trying. He explains to Rey that the Jedi were a failed experiment, and that rigidly obeying old and stale rules and histories doesn’t accomplish anything. But, even though he’s saying all of that, he’s also afraid to branch out. He’s stuck in a middle ground, not wanting to repeat the sins of the past but not wanting to be punished by new mistakes. By the end of the film though, and especially after Yoda gives him in a push in the right direction, Luke realizes that that’s not the way to live a life. He realizes the importance of legends and stories. Yes, the complacency of the Jedi Order is what led to its downfall, but respecting the past and learning form it is necessary too. He allows himself to become a legend once more, a story that will inspire people. Not because of some ancient text that claims that there are grand saviors who will balance the Force, but because it’s the right thing to do. By the time this film ends you can tell that something new and bold will be created from the ashes of the Jedi Order. It won’t forget the past, but it also won’t slavishly bow down to it, afraid to change and become something new. It’s about adaptability. And, after learning that Rey’s parents aren’t some amazing dynasty of Force users, that she’s just a random person who has been given the ability to change the galaxy, we can begin to see that this story is ready to adapt. It’s time to move past the Skywalkers. We don’t need a messianic family of wizards who are the chosen ones to save the galaxy. They’re a story that can inspire, but now it’s time for the average people to take that story, get that inspiration, and move on. It’s a moral that has concerned a lot of people, people who are afraid of change and who don’t want this story to deviate from the norm. But that’s untenable. This story needs to evolve and continue to inspire people for generations to come. We can all be the change we want to see in the world, we don’t need to be the chosen one.

Star Wars: The Last Jedi was written and directed by Rian Johnson and released by Walt Disney Studios Motion Pictures, 2017.