Yesterday we got to talk about an Apu episode, a type of episode that is shockingly popular over the years. Plenty of other secondary or even tertiary characters have gotten their chance to step into the spotlight and be featured on an episode of the show, usually giving them far more depth than you’d ever want a bit character to get. And, wouldn’t you know, we have one such episode to talk about today. Because who hasn’t wanted to dig deeper into the character of Professor John Frink?

The episode begins with Smithers marching into Mr. Burns’ office, hoping to convince him that he should do something to recognize Valentine’s Day. The workers are quite fed up with Burns’ treatment, and Smithers thinks that letting them leave early for the day in the hopes that it will improve morale. Burns of course refuses, but when Smithers says that if he doesn’t do something soon the workers will have to rebel, Burns decides to meet him halfway.

Burns announces that the Plant will be throwing a Sweetheart’s Dance, basically just a prom for Plant employees. That seems like an incredibly strange and awkward idea, but they go with it, and most of the employees seems pretty excited about it. We see all of Homer’s coworkers show up with their significant others and awkwardly dance with each other while getting into high-school hijinks. Like Marge and Homer having sex on Burns’ desk! Fun times.

Oh, and we also learn that apparently Professor Frink works at the Plant. He’s some sort of consultant and comes to the party stag. They do make awkward chitchat with Frink, since he seems so incredibly sad, but Homer and Marge then sneak off and go sit on top of the cooling towers, having a romantic time together. Which is ruined when they get a call from Abe complaining that he’s alone on Valentine’s Day and sad. So, Homer and Marge head over to the Retirement Castle to try and cheer up Abe. And, when they get there, they find that everyone in the building is incredibly depressed. But, that’s okay, because as the Simpsons are lamenting how sad all of these old folks are the Castle staff come in and give them new pills. And, these pills cause immediate hallucinations where the old folks are reunited with their dead loved ones. So, the old folks get to dance around with their wives, husbands, pets, and hardware stores. Which makes Marge a little wary.

The next day Homer heads into work and finds that several people are incredibly hungover after that weird middle-school dance. Including Professor Frink! He’s actually passed out in Homer’s office, and when Homer comes in he just starts talking to Homer. He laments how incredibly sad he is, and asks for relationship advice, figuring that Homer’s married and must know something.

Homer just ends up telling Frink that love is primarily trial and error, and that there’s no surefire way to explain it. But, by saying that it was trial and error makes Frink decide that love must just be a science, and he needs to start studying it. Frink and Homer then begin compiling information from hundreds of women, trying to come up with everything they find attractive in a man. And, when that’s done, he takes that information and starts fixing himself. He changes his eye color, uses lifts to be taller, and even gets to work creating a device that will make his voice more palatable. 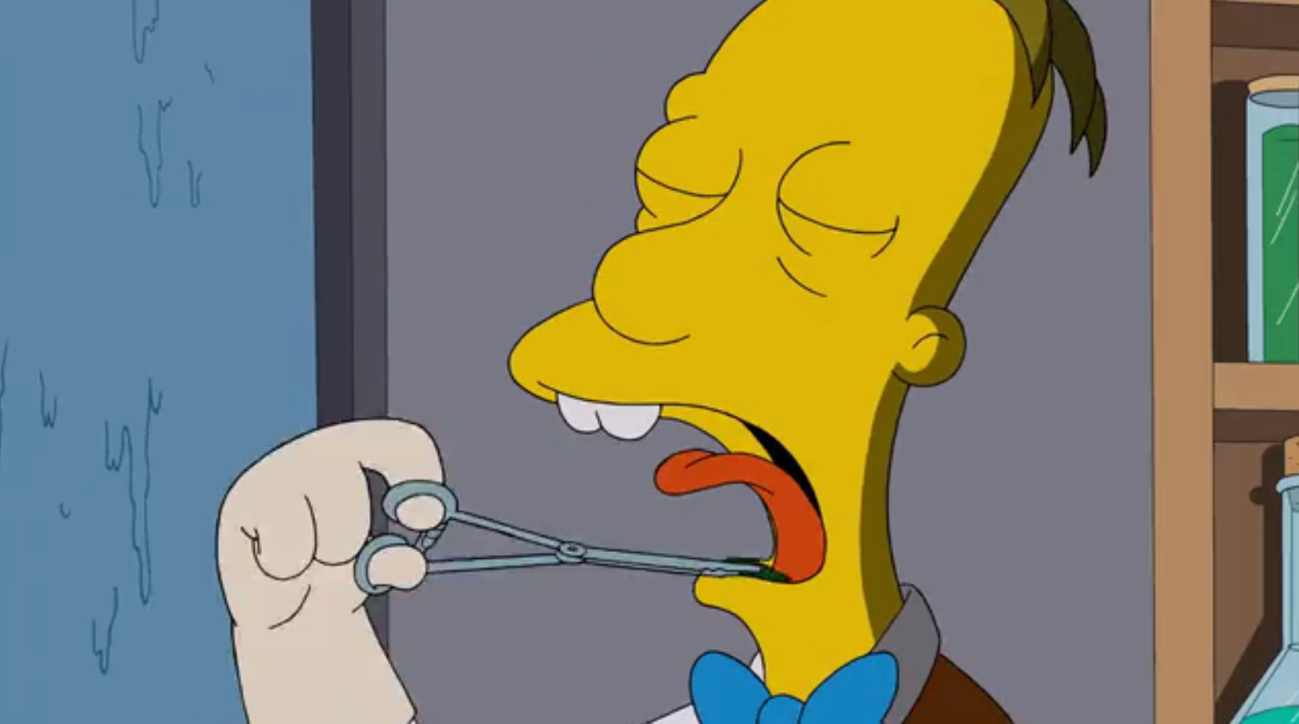 Meanwhile, Marge brings the kids to the Retirement Castle, still feeling bad that Grandpa was so sad on Valentine’s Day, and finds something distressing. The old folks are all still tripping on those new meds. This really upsets Marge, especially when Bart starts taking advantage of their shaky grasps on reality by gambling with them, and she goes to yell at the nurse in charge. The lady doesn’t really seem to care, but does agree to stop giving the old people these powerful hallucinogens.

Back over in the love experiment, Frink has devised a little machine that he can hide under his tongue, giving him a far sexier voice. And, from there, he does what all creeps do and goes to a yoga studio. And it works pretty well! Frink starts picking up a lot of women and getting all sorts of dates. But, while Frink is becoming a massive player he decides to now use his powers of love to help others. When he goes drinking with Homer one night he sees how sad Lenny, Carl, and Barney are, and decides he can help them.

But, before we see what that means we need to wrap up the Grandpa plot. Because after a few days without those pills Marge comes back to check on them, and sees that things are dire. They’re all even more depressed than normal now that their hallucinations have been ripped away from them. Well, except for Grandpa. Because he’s been hording those pills, and now he eats basically a whole bottle of them, which succeeds in transporting Grandpa back in time.

Abe is suddenly younger, in the fifties, and has Mona back with him. He flees from the Castle and starts wandering around the Springfield of the past, even finding a classy club that he used to love. Abe is ready to surrender to this new reality when Marge suddenly shows up, trying to bring him back to the real world. Grandpa is hesitant, but when Bart and Lisa also show up he finally relents, and returns to reality.

So, with that taken care of it’s time to see how Frink is going to help the sad people of Springfield. He calls a whole bunch of women that he’s been dating to the Springfield Planetarium under the guise of choose one of them to be his wife, but he has a surprise. He’s been using his skill to find perfect matches for all of these women and the sad men of Springfield. He then makes dozens of love connections, and potentially makes several people very happy. Except himself. He couldn’t find anyone who was a perfect match for himself, so Frink goes back to his old life of solitude, happy he could make other people happy. I think I liked this episode as much as I ever was going to. It was fine, didn’t have anything overly objectionable, and was a generally enjoyable episode. But, as I’ve said before, there are certain characters that I just don’t think benefit from episodes where they’re the stars. There are some characters who really aren’t characters, they’re just bits. And I think that Frink is one of them. I don’t really need to know more about Frink, and learning more about his life just makes what I do know about him more sad. He’s always just been a weirdo who shows up for exposition, and confirming to me that he lives a sad life of solitude until the plot requires him to shamble out is kind of a bummer. Like I said, I did enjoy the episode, but it still does leave me with a weird feeling towards Professor Frink, which is something I never thought I’d feel.

Take Away: Love is very complicated, and can’t be boiled down to facts and figures.