The Disaster Artist and the Need to Create 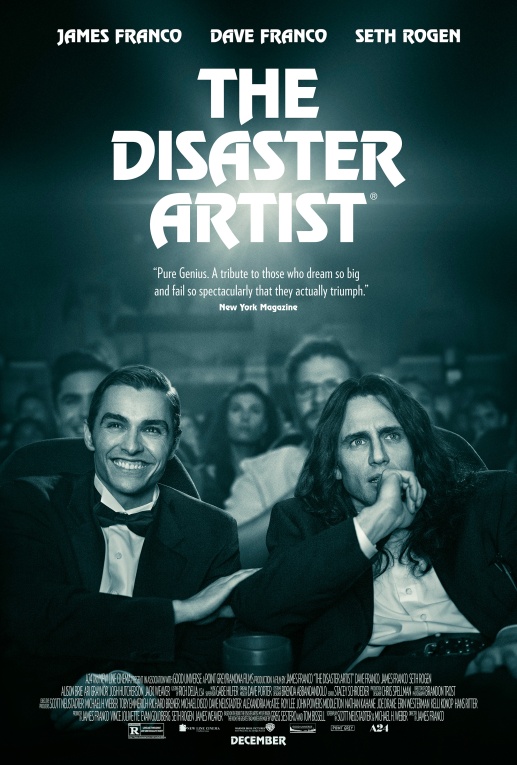 Growing up I had two television shows that I absolutely adored, and that I really think shaped my sense of humor, and really more of my personality. There’s the Simpsons, which I obviously talk about far too much, and Mystery Science Theater 3000, which I actually don’t talk about much at all. I’ve loved MST3K since I was a child, and it’s given me a deep affection for “bad movies” And, not necessarily in an ironic, spiteful manner. Sure, there are plenty of films that are so shockingly inept that they can be downright comedies to watch, but for the most part being a fan of MST3K taught me to appreciate these bizarre little gems. They’re unique, and so often have a life of their own, and have various aspects that make them worth examination, even if it’s sometimes just as an academic case study of how not to make a functioning narrative. So, of course, over the years I started to hear about this legendary film, the Room. Hailed as one of the worst films ever made, and gaining that special cult reputation that so few films have garnered as to warrant monthly screening where avid fans have developed whole scripts of audience participation, the Room is a looming figure in the world of schlock films. And, yeah, it’s bad. It’s not one of my favorite entries in the echelon of bad films, and I’ve never gotten the huge devotion that the film has garnered, but it’s still an interesting film. So I was certainly interested when the second lead of the film, Greg Sestero, wrote a store of tell-all book about this experience filming this fascinating train-wreck. And, when they announced that famous weirdo James Franco was directing and starring in an adaptation of Sestero’s book, giving us a film about the making of one o the famously worst films of all time, I was excited. And, thankfully, I was not let down. Because this film is a fascinating experience, and legitimately one of my favorite films of the year.

The Disaster Artist is the tale of two men, Greg Sestero and Tommy Wiseau. Greg is a young aspiring actor who is struggling to find the confidence and self-assurance to succeed in the world of acting. And, when he comes across the incredibly bizarre, but totally confident Tommy Wiseau in an acting class, he’s fascinated. He begins working with Tommy, learning how to replicate his confidence while trying to figure out how old Tommy is, where he’s from, and how he got his money. And, after some time working together Tommy decides that they should move to Los Angeles together and chase their dream, since it just so happens he has an apartment there. So the two move to Los Angeles and begin following their dreams. There’s just one problem. While Greg was pretty easily able to find an agent, no one is interested in working with Tommy. He faces rejection after rejection, and watches as Greg begins dating a woman named Amber, his life seeming to be going perfectly. And, after a particularly brutal rejection, Tommy begins to doubt his entire goal in becoming an actor. That is until Greg mentions something that will probably haunt him for the rest of his life. He suggests that if no one will let Tommy be in a movie, maybe he should make his own movie. So, Tommy gets to work writing a script, what he thinks will be his magnum opus, a true masterpiece of American storytelling. And, after several weeks of working, he has his movie. The Room.

Tommy convinces Greg to come on board as the second lead, a character named Mark who is best friends with Wiseau’s Johnny and the character who ends up having an affair with Johnny’s fiance Lisa and ruining his life. Greg agrees, and the two get to work trying to figure out how to make a movie. Tommy buys some film-making equipment and rents a sound stage, he puts together a production team, hires some actors, and gets to work filming the absolutely baffling film. Everyone involved seems optimistic at first. Wiseau is clearly a lunatic, but it seems like it could be working. Until Wiseau starts acting. And, when his dreadful acting begins everyone starts to lose faith, and gradually everyone starts to doubt the likelihood that this film will work even in the slightest. Which of course starts to wear down on Tommy. He starts thinking that everyone is out to get him and begins treating the crew like garbage, trying to dominate them. It begins to drive everyone away, and eventually even Greg can’t take it anymore. But, the film eventually wraps, and everyone moves on. Greg stops seeing Tommy and tries to make things work with Amber. It doesn’t, but he starts to build a real career. And then, out of the blue, he gets an invitation to the premiere of the Room. Tommy finds him, and Greg ends up agreeing to come see their film, for better or for worse. They arrive at the premiere with the cast and crew, and some poor unfortunate souls who happens to check out this new film, and they watch it for the first time. And it’s a travesty. Everyone in the theater is horrified at what’s on screen, and after the embarrassment wears off they end up finding some solace in laughter. The entire theater begins uproariously laughing, and Tommy is disgusted. He can’t comprehend why people are laughing at his beautiful work of art. But, to save him the shame, Greg recommends rolling with it. People are enjoying it, even if it’s not the way that Tommy was hoping, so he should just embrace it. And, the rest is history. 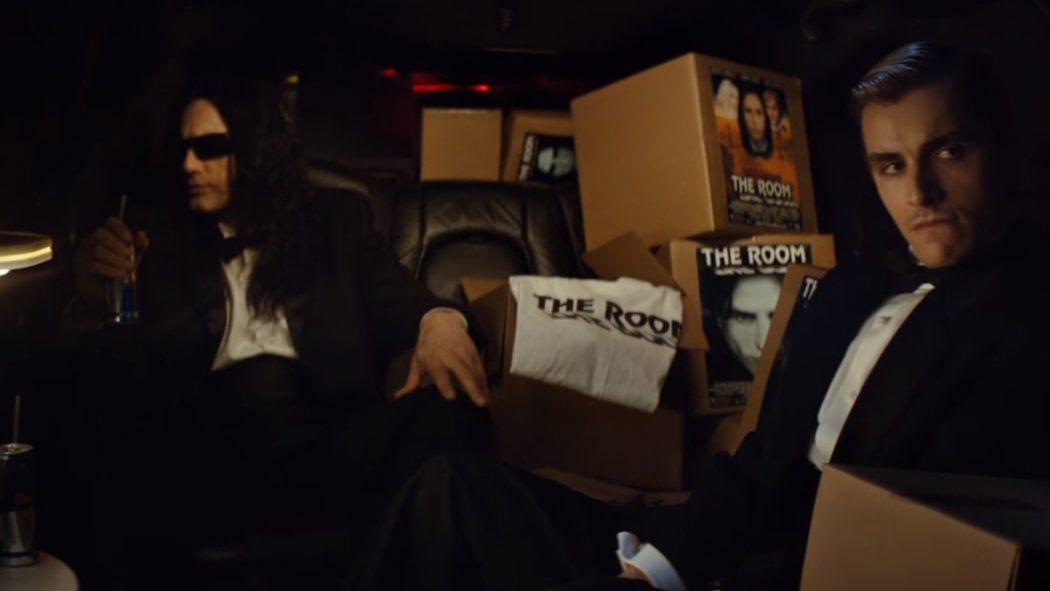 This film is fascinating. I’ve always been a sucker for movies about movies, and one of my favorite films of all time is the very comparable Ed Wood. So, I figured that it was going to be a sure thing that I’d enjoy this film. But, I wasn’t expected that this movie would be this delightful. It’s clearly an absolute passion project, which everyone involved was fully invested to. Having the two leads of this film be the Franco brothers at first seemed like a funny idea, but it’s undeniable how much they loved this project. Dave Franco puts in his absolute best performance as Greg, our sane rudder in this insane world. But it’s certainly James Franco who will be remembered for this film, delivering a spot-on flawless performance as the baffling figure that is Tommy Wiseau. The commitment and strength of this portrayal cannot be denied, and it’s truly a wonder to watch Franco perform in this film. And it’s not just the Franco brothers. Everyone in this film is terrific, and the movie is absolutely stacked with various comedians, people who are clearly just fans of the Room and were willing to recreate scenes of the film absolutely perfectly. This film is a wonderful artifact, a loving tribute to a true oddity in the history of film, and while I can’t quite believe that it exists, I’m so glad it does.

The film has been getting pretty unanimous praise, and I obviously see why. It’s a fantastic film that had me grinning from beginning to end. But, I’ve noticed that some people have been pushing back against the film, feeling that it didn’t dive deep enough into these characters. It didn’t investigate or examine the bizarre character of Tommy Wiseau enough. And, while I suppose this film didn’t offer too many insights into the past or Tommy Wiseau, I don’t think that that’s what this film needed to be about. Instead I feel like this film got to a very powerful truth about both Wiseau and Sestero. They just want to create. They’ve both convince themselves that their true purpose in life is to bring joy and happiness to the world through their craft. And, when they were unable to find a legitimate method to do that, they struck out and found their own way. True, the end result wasn’t what they anticipated, and we see that Wiseau was a controlling and abusive person, weaving a tangled web that kept people close to him, and reliant upon him. But regardless of what kind of person Wiseau is, we know one important thing. He wants to entertain people. And, he succeeds. It’s not the way that he had anticipated, but it’s undeniable that he’s brought joy to people’s life, even if it’s at his own expense. And, at the end of the day, I think that’s what’s most important to him. He and Greg are creators. They have a desire to make things, to make people happy. And, in their own way, they’ve succeeded in that.

The Disaster Artist was written by Scott Neustadter and Michael H Weber, directed by James Franco, and distributed by A24, 2017. 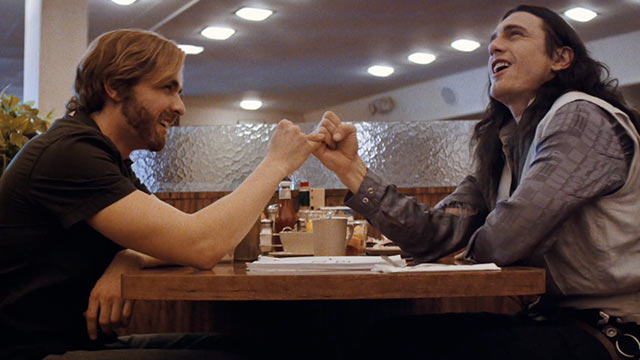