Hello everyone and welcome back to another installment of Bat Signal, my ongoing quest to read every issue of Detective Comics in random order and with essentially no context. And we’re going back into the very earliest days of Detective Comics again this week to that weird era of the comics where they just didn’t seem to know what Batman should be. He isn’t the dark and brooding pulp avenger that he was in the first couple of issues, and he isn’t the world’s greatest detective that we’re used to later on in the Golden Age. Instead he’s a silly and weird swashbuckling character, and this issue really puts that version of Batman up front and center. Plus, we get a very silly and weird villain to tangle with Batman.

The issue begins in an unnamed European dictatorship where a famous jewel-thief known as Mr. Baffle is about to be executed at sunrise. He stands there, joking with the soldiers who are about to kill him as he stalls for the exact moment of sunrise. And then, when the light hits the soldier’s eyes, they fire, and Baffle falls to the ground. But, it was all a rouse. It turns out that Baffle paid off the guards to put blanks in their guns, and since their commander was blinded he doesn’t question Baffle’s death. So, while the people of this country think that Baffle is dead he takes that opportunity to flee Europe, hop on a steamer and make his way to America. Gotham specifically. Mr. Baffle is sure that he’s going to do quite well in America, what with his natural abilities towards screwing people over, and he gets to work almost immediately. Because, on his first night in Gotham he comes across two robbers, and demonstrates his amazing pick-pocket abilities, showing what an asset he can be to their criminal enterprises.

Baffle then gets to work and makes up a list of the richest people in Gotham, and announces to his new partners that he’s going to start moving down the list, robbing them all. And, as luck would have it, the very first name on his list is Bruce Wayne’s. So, Baffle heads to Wayne Manor, which is looking like a modest country home complete with a barn in this particular issue, and gets to work on one of his safes. Baffle has a specific method where he rubs his finger-tips raw with sandpaper so that they’re extra-sensitive, and is able to get the safe open. Unfortunately as soon as he does that Batman and Robin just so happen to come home from a night of crime-fighting. They find Baffle inside their home, and everyone is quite confused. Baffles assumes that they somehow heard about his plan though, and doesn’t put it together. He fights a bit with Batman and Robin, but is actually able to slip past them and escape the house. And, because they’re a little startled about the guy getting into their house, they don’t follow him. Which doesn’t really make sense, but people are going to make a lot of weird decisions in this issue.

Baffle escapes this predicament and heads back to his partners where he starts bragging about besting Batman. But, he also decides that there has to be a better way of accomplishing his goal, and comes up with a very weird plan. He shaves off his facial hair and gets himself a job as the new high-society journalist for a Gotham newspaper. This was apparently extremely easy to do, and once he has the job he’s suddenly to invited to every rich person in Gotham’s house. Oh, and while he’s there he manages to break into their safes and steal their goods, usually with the help of his two partners who are masquerading as his photographers. And, of course, at one of these parties Bruce Wayne shows up. He doesn’t recognize Baffle, but he does get a bad feeling. So, Bruce goes to suit up at the same time that Baffle puts on a mask and gets ready to rob their safe. They have another tussle, but as the fight is escalating Bruce Wayne’s date, Linda Page, comes in and startles everyone. But, Baffle is able to slip away, but not before Linda is able to touch his hand, noticing the raw fingertips. 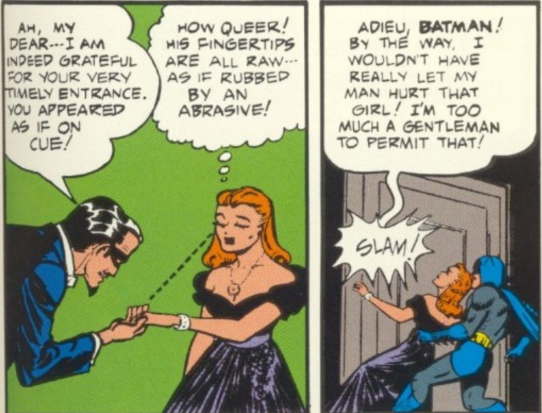 Baffle then slips out of the house, locking the door behind him. Batman tries to chase after him, and has to jump off the house, landing in the pool. He then attempts to chase Baffle, who has now stolen a car. Luckily Batman finds a loitering Hansom Cab, which he steals and is somehow able to get up to speed with the car. Batman then leaps out of the buggy and into Baffle’s car, which is when Baffle does something that makes no sense. He throws the jewels into a nearby lake, and for some reason Batman decides that he cares more about getting the stolen jewels back than stopping Baffle, and follows the jewels into the lake. Weird priorities Batman. But, when he’s done with that he returns home to find that Robin has figured out that Baffle the society reporter is the man who tried to rob them.

So, now Batman knows that Baffle is the criminal. But, where will he find him now? Why, at another society party where he’s telling everyone he’s Batman of course! Baffle is rattling off details of the robbery that only Batman or the robber would know, and all of the rich people assume that that must mean he’s telling the truth, and is Batman. However, when he talks to Linda Page she recognizes his raw finger-tips, and realizes that he must be the thief instead. She screams this information out, and at the exact same time Batman and Robin show up. Robin takes care of Baffle’s men while Batman chases Baffle through the house, until they end up atop a balcony. The two begin sword-fighting at that point, and after a rather gentlemanly duel, Baffle realizes that he’s woefully unqualified to keep fighting Batman, knows that he’s trapped in a corner, and jumps off the balcony and into the river below, presumably to come back at some point. But, I doubt he does.

This issue was a whole lot of fun. In the big picture, I don’t think that I really like swashbuckling Batman. I do really enjoy the versions of Daredevil that function more like that, but for whatever reason when I read stories with Batman where he’s running around, laughing and telling jokes, it just feels weird. But, on a case-by-case basis I think it can be a lot of fun, and this issue was a lot of fun. Seeing Batman deal with a gentlemanly jewel thief who is preying on the rich and pampered of Gotham was a blast, and even though characters did a lot of things that make very little sense, it was a great issue of Detective Comics. But, man do people do weird stuff. Batman jumps after a bunch of jewels instead o stopping the bad guy, Baffle is able to get a great job randomly, Batman and Robin don’t follow Baffle after he robs them the first time. It’s just kind of weird. But, a fun and silly issue of Detective Comics is always appreciated, and it’s easy to look past some of the weird character decisions.

“A Gentleman in Gotham” was written by Bill Finger, penciled by Bob Kane, inked by Jerry Robinson and George Roussos, and lettered by Ira Schnapp, 1942. 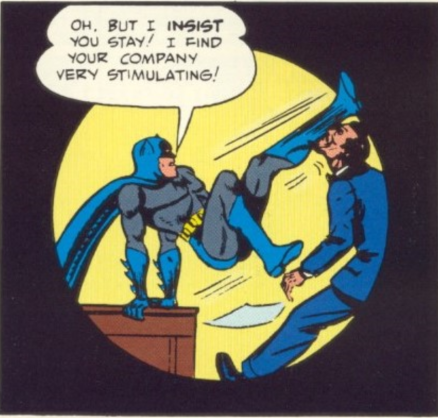