Hello everyone and welcome back to another installment of Bat Signal, my ongoing project to read every issue of Detective Comics in random order and with essentially no context. And we have a fun one to talk about today, folks. We’re getting another issue with one of Batman’s classic rogues, because apparently after having a severe drought of those issues we’re now getting an embarrassment of riches. Plus, its the Scarecrow, one of the villains that I think can be used the most effectively, and who we haven’t really had many examples of yet in the project. And he’s really swinging for the fences in this issue, giving us blow-darts, fearful citizens, vast wildernesses outside of Gotham City, both Robin and Bat-Girl, farmers, and gangsters! It’s a hoot.

The issue begins with Bruce Wayne sitting in his penthouse, reading the newspaper, and feeling irritated. There’s a mayoral race going on in Gotham, and one of the candidates is running on a fervent anti-Batman campaign, and it’s really starting to irritate Bruce. And that irritation carries him throughout the day, moodily sitting through Wayne Enterprises meetings all day before heading out into the city to catch some bad-guys. Bruce suits up, and ends up encountering some crook getting ready to break into a pawn-shop, and somehow manages to get inside of the shop so that when the crook get in, Batman’s waiting for him. Batman beats the guy up a bit, but during the fight is startled when a small dart suddenly hits him in the back of the neck. He doesn’t think much of it, and gives himself an all-purpose antidote, and goes on with his night. But, the next day when Bruce has a lunch with Commissioner Gordon, he starts to notice something weird.

While Gordon is telling Bruce that the mayor is planning on throwing him under the bus during the campaign, the Commissioner suddenly starts acting terrified of Bruce. That’s a little weird, right? Well, to answer that, we skip ahead to the next morning when several Gotham gangsters are arriving at a corn farm in the vast countryside outside Gotham City. They meet up with a group of farmers who take them into a barn, which is actually hiding a rather high-tech laboratory. And whose laboratory is it? Why the Scarecrow! He’s called these gangsters to his laboratory because he’s recently developed a version of his fear-toxin that makes everyone terrified of one subject. He suggests that they give themselves the fear-toxin, making everyone else in the world too scared of them to stop them from committing crimes.

Which is clearly what has happened to Batman. Because that night he goes out in to the city once more, and ends up foiling a robbery at a roller-disco, only to have everyone inside become terrified of him. And, it gets worse. Because when he gets home he finds that not even Alfred can stand to be around him. So, realizing that he’s out of commission, he calls in some help. Dick Grayson and Barbara Gordon get the call and then race back to Gotham, ready to help Batman as Robin and Batgirl. Everyone clearly realizes that since Batman’s afflicted with something involving fear that Scarecrow is involved. They begin looking for Scarecrow, and it’s made pretty easy, since he and those gangsters are loudly robbing a shopping mall while doused in that fear-toxin. The side-kicks get kind of trounced in the fight, but they do get a hold of one of Scarecrow’s toxin-pellets, and manage to figure out where it was manufactured. So, they head off to keep tracking down leads while Batman sadly sits in his room, wondering if anyone will ever be his friend again.

Batgirl manages to track down the small chemical refinery where the pellets came from, and ends up finding that the workers are busy manufacturing both fear-toxin and PCP. Not a great combo, guys! She beats up several workers, and gets told that the shipments were going to a small farming community called Hortonville. And, while she’s doing that, Robin goes back to the area where Batman was hit by the dart, and finds a suspicious amount of corn-shoots. So, putting them together, the two decide to investigate a cornfield in Hortonville, and head out to the boonies. Unfortunately, when they get to the field they find something confusing. A scarecrow made to look like Batman. Seems like they found the right place! But, as they stand around gawking at it, they’re gassed by the Scarecrow and taken hostage.

Meanwhile, things are getting weird back in Gotham. Because the Scarecrow has placed a dummy of himself in Commissioner Gordon’s office, with a radio receiver so that he can taunt Gordon and tell him he has both Batgirl and Robin captive. Gordon gives Batman a call, and Bruce realizes he’s going to have to venture out into the world. He knew that the kids were going to Hortonville, so he makes his way there, and finds some gun-totting goons guarding the cornfield, so he knows that the found the right spot. Batman is able to easily beat up these goons, and heads into the laboratory where he sees Scarecrow monologuing to Robin and Batgirl. Scarecrow freaks out when he sees Batman, and has a robotic guard-owl attack him. So, Batman lights the owl on fire!  And, to make it crazier, the flaming owl then lights several bays of hay that were in the laboratory on fire. Scarecrow panics, and lunges at Batman. Which turns out to be a good strategy, because the prolonged exposure to the fear-toxin is wearing down on the Dark Knight, causing him to start to lose consciousness. So, to save the day, Robin reaches through the bars and kicks the Scarecrow, sending him flying onto a table full of un-capped syringes full of fear-toxin. Scarecrow then essentially overdoses on fear-toxin, giving Batman and his chums the opportunity to free themselves and bring Scarecrow to justice before the laboratory burns down around them. Everything’s fine! They then bring Scarecrow to Arkham where he deals with his overdose of fear-toxin.

This issue was a lot of fun. I really like the Scarecrow, and I think that he makes for some weird and unique stories, and today’s issue is a perfect example. Technically we’re seeing a similar version of the fear-toxin in this issue, what with people being afraid, but by targeting it on one person so that everyone is afraid of them, it becomes even more silly. I especially love that Bruce has to hide in a dark room because everyone is so scared to be around him, instead of just using that fear to his advantage. Well, until the end. It’s also nice to see an issue that had so much heavy lifting from Batgirl and Robin, especially when Batgirl does most of the detection and work, with Robin more or less just along for the ride. Plus, things get absolutely zany by the end what with the robotic owl. This issue checks off a lot of my boxes for a solid issue of Detective Comics, and it was an absolute blast.

“The 6 Days of the Scarecrow” was written by Gerry Conway, penciled by Don Newton, inked by Dan Adkins, colored by Adrienne Roy, and lettered by Ben Oda, 1981. 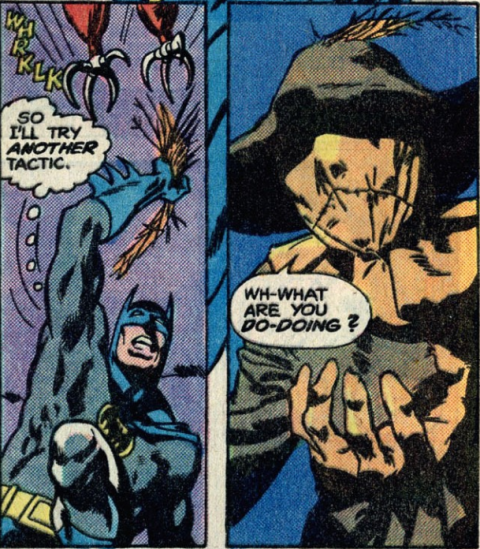