Hi there everyone, and welcome back to another installment of Bat Signal, my ongoing quest to read every issue of Detective Comics in random order and with very little context. And, folks, I have a pretty fun little issue to talk about today. Once again we have a delightfully insane comic written by Frank Robbins, although sadly now penciled by him, and one that features one of the weirdest tropes that I’ve encountered here on Bat Signal. It’s a comic where with a lot of fake Bruce Waynes or Batmen. I’m not quite sure why I’ve tackled so many issues that revolve around people pretending to be either Batman or Bruce Wayne, but it’s an oddly rich vein of stories, and we have yet another one to discuss today. And it’s bonkers. In the best possible way. So buckle up folks, because this is one of the silliest and most fun issues I’ve discussed here on Bat Signal in a while.

The issue begins with Bruce Wayne proudly arriving at a Gotham Airfield to participate in something insane. Apparently the city have purchased a VTOL jet, and they want famous playboy Bruce Wayne to demonstrate it’s abilities by getting the in the jet, using its vertical takeoff, hovering for a bit, and then landing. Why they chose a famous rich guy to do this and not a professional, I have no idea. But this is Gotham, and they do stupid shit all the time. So, while military men and journalists watch, Bruce Wayne jumps into the cockpit, and takes off. He rises up into the sky, through some cloud cover, and then right on time comes landing back down on the ground. Everything worked perfectly. Except for one minor detail. When the jet lands, the cockpit is empty. Bruce Wayne is gone.

The military men look all around the jet, trying to figure out what could possibly have happened, and they have no ideas. But, as they’re inspecting it, the ship suddenly ejects the cockpit, destroying all evidence that they might have had. So, that’s odd. So odd that Commissioner Gordon gives a call to Batman to help. However, when the call goes through, in the Batmobile, no one is there to answer. So, did Bruce Wayne actually vanish into thin air? Well, to answer that the issue is going to have to jump back a couple days.

Apparently Bruce Wayne was all set to participate in this weird plane demonstration, but the morning of the event  he received a letter that was addressed to Batman. It was from a teller at a bank in Gotham informing him that the teller was involved in a planned heist, but couldn’t go through with it. So, Bruce decides that this is more important than the plane thing, and decides to go deal with the heist instead. But, that left them with the whole jet thing. Luckily, Alfred apparently has a Bruce Wayne impersonator named “Mr. Morse” who occasionally fills in for these things. Alfred then calls up Morse and tells him he’s to arrive at the airfield to participate in the test. So, this random dude was the one who vanished? Well, not quite. Because as this impersonator is driving to the airfield he finds a broken down cement-mixer, and stops to help. The man driving the cement-mixer talks with Morse, but end up smashing him over the head with a wrench, and tosses Morse’s body into the cement, thinking he was Bruce Wayne. The mixer is then driven off a pier, killing the impersonator. And who could this person who killed him be? That’s right! A third Bruce Wayne! But, that begs the question. Where is Bruce Wayne prime? Well, he’s arrived to foil that heist that he learned about, and shocks the robbers. However, while fighting with them they end up tossing Batman into the back of their duplicate bank-truck, which they’ve somehow installed knockout gas in. They fill the truck with gas, and then wait outside for Batman to be knocked out. Unfortunately, he had a special breathing apparatus in this belt, and was able to survive. So, when the goons open the truck to deal with him they find Batman waiting, and he promptly beats them up. Once that’s taken are of, he checks inside the Batmobile, and gets the message from Gordon that “Bruce Wayne” has gone missing, and he races to the airfield.

But who is this third Bruce Wayne, and where did he go? Well, it turns out that he’s a man named Carlyle Crane who used to be an aircraft tycoon. He developed these VTOL jets, but was disgraced after Bruce Wayne exposed some shady business dealings. So, Crane built a second VTOL jet, designed it to be operated like a drone, and had it take the place of the real VTOL while he, dressed as Bruce Wayne, escaped with the real one. The fake VTOL then exploded, destroying the evidence. All to kill Bruce Wayne, who somehow exposed his dealings. There’s only one problem. Reports come in that “Bruce Wayne” had a helmet, and Crane becomes worried that he left it in the car after killing the guy with the cement mixer. So, Crane returns to “Wayne’s” car to get rid of the helmet, only to find Batman. Batman quickly beats up Crane, finds out the truth, tells Gordon that Wayne is alive and well, and I guess no one cares about the fact that that Bruce Wayne impersonator was suffocated in cement?

I often get irritated with Detective Comics stories similar to this one, where it’s impossible to figure out the mystery and they just kind of toss out a bunch of important plot elements that were never established as if they were common knowledge. But, when this issue is this insane, I give it a pass. Because this issue included not one, not two, but THREE Bruce Wayne’s. And it’s a blast. It’s so goddamn complicated, and the idea that Alfred and Bruce use a regular Bruce Wayne impersonator to deal with his Batman activities, only to brutally kill that person off with barely a second-thought, is hilarious. It’s not a particularly deep issue, and it doesn’t have a whole lot of great detective action, but it’s a whole lot of fun. I genuinely love Frank Robbins’ writing style, and I think he’s written some of my favorite crazy Batman stories, and I think the only way that this issue could have been more fun, and more up my alley, is if he’s penciled it with his super bizarre almost caricature style. But, as it stands, this is a very fun issue of Detective Comics and sometimes that’s all I need in this world.

“Stand-In For Murder” was written by Frank Robbins, penciled by Bob Brown, and inked by Joe Giella, 1969. 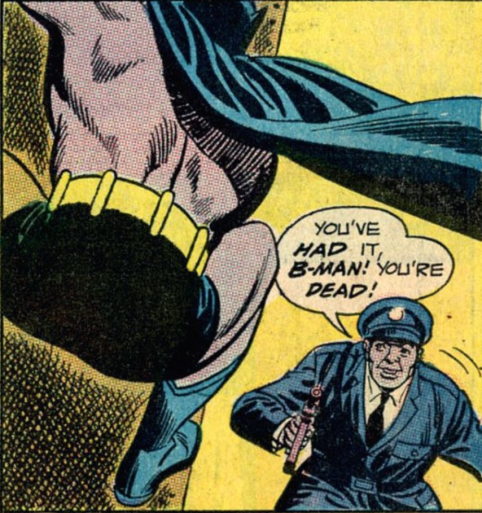 Everything about this panel, from the dialogue to the framing is hilarious to me.