You know, things have been a tad rough here on Lifetime of Simpsons lately. We’re nearing the end of the project, and it seems like the show is ready to give me a last couple of kicks before it’s polished off. But today we have something kind of fun. It’s pretty baffling that they decided to name the episode off a gag from the first five minutes, but whatever, who doesn’t want to see the church council become card sharks?

The episode begins with Chief Wiggum sleeping in the police station, when he’s rudely awakened by Eddie and Lou with news of a sniper. But Wiggum isn’t too interested, because he’s having a package delivered, and needs to wait for it. So, Eddie and Lou leave the station to do their jobs, and Wiggum sits around eating an entire microwavable lasagna. But this waiting pays off, because a package finally arrives.

However, it’s not his package. It’s someone else with a similar name. But, he decides to keep the package, because it’s for a fully functioning jetpack! Wiggum then immediately opens the jetpack, and gets Eddie and Lou to help him set it up. Wiggum decides he doesn’t care about the manual, and just starts jetting around, letting the massive blasts of air that keep him aloft destroy everything in his path. But who cares, Wiggum can fly!

Wiggum becomes completely obsessed with the jet pack, using it all the time, and referring to himself almost exclusively as the Sky Police. However, nothing good can last, because one day while Wiggum is temporarily inside the office instead of among the clouds, a man from the military shows up with bad news. That’s his jetpack, and he would like it back. So, doing the logical thing, Wiggum tries to escape from the police station, until he’s shot at by the army.

Wiggum ends up slipping out of the jetpack, and it begins flying around the town, before eventually crashing into the church, causing it to light on fire. You know, like the time Homer destroyed the church with a model rocket? Anyway, the church is destroyed again, and it’s apparently Sunday, because the Simpsons have arrived at church right as it exploded. Oh, and because Reverend Lovejoy said that everything that happens is an act of God, the insurance company won’t do anything for them. Which means it’s time for the council to meet and figure out what to do to save the church. This council is, as always, composed of Reverend Lovejoy, Helen Lovejoy, Marge, Sideshow Mel, Agnes Skinner, and Ned Flanders. They start brainstorming ways to make enough money to save the church, and end up with some pretty lame ideas. Basically they just put cans around local businesses in the hopes that people will randomly donate.

However, one day when Marge goes to pick up the meager donations from the Kwik-E-Mart, she gets talking to Apu, and he suggests a different way to make money. He says that the more Springfielders go to church, the less they steal from him, so he’s willing to let them in on a little secret. He’s a great card counter, and is willing to teach the council how to cheat at blackjack so they can win as much money from the casinos as they need.

The council is obviously a little unsure about this, but Apu insists that this isn’t illegal, just frowned upon. So Reverend Lovejoy makes up some biblical bullshit, and convinces them that cheating at gambling is perfectly fine. The council then begin designing their costumes, and learn how to count cards. Apu teaches them the basics of card-counting, and even teaches them how to avoid all the distractions of the casino, until they’re ready to become masters.

There’s just one problem. They all agree that they need to keep this very secret, and that in particular Homer cannot learn about it. So, Marge comes up with a lie and starts telling Homer that she and the council have written and staged a musical revue that they expect will make them the money. Homer completely buys this lie, and Marge and the rest of the council head out to a riverboat casino, in elaborate costumes, and get to work.

The council arrive at the casino, and start putting all of their hard-work to use. They’ve come up with rules and signals for each other, and spend a wonderful night winning a whole shitload of money. Afterwards they go out to celebrate and count their money, and all get a little drunk. Not only are they getting the money they need, they’re also enjoying the rush. Marge does have some problems keeping the lies up for Homer, but it doesn’t matter, they’ve all having a blast. Until they meet up with Apu, and he gives them bad news. Apu tells them that after such a successful haul, the casino will now be onto them. So they’re going to need to even more elaborate costumes, and be extra careful, because the casino will now be on the lookout. So the day to do their final haul arrives, and Marge prepares her costume, only for Bart and Lisa to find her. She decides to tell them the truth, and explains the whole con, while making them promise not to tell Homer what she’s actually doing.

That night they head out to the casino, and once again get a great haul. Their costumes work, they don’t get the attention of the pit bosses, and they manage to make it out with the money. They all meet up at a motel and realize that they officially have all the money they need. Marge then heads home, pleased with her success, only to find out some horrible news. Homer isn’t home. Because he’s been kidnapped by the casino, and is being held captive until Marge brings the money back.

Bart and Lisa explain what happened. They became worried when Marge wasn’t coming home so late, and ended up telling Homer the truth. He became terrified that she’s been caught by the pit bosses, and went to the casino right as they were leaving, and in the process got himself caught. The pit bosses tell Marge over the phone that they’ll give her Homer back, but only if she brings back all of the money from their haul. Even though it was legally obtained.

Marge begins panicking, and decides that there’s nothing to do, she needs to give the money back. However, when she goes to Reverend Lovejoy she finds out some more bad news. Lovejoy has already given the money to the contractors, and they refuse to give it back. So, Marge is screwed. She briefly tries to get the council to help her out, but they’re of no help. So Marge needs to do this all by herself.

And she’s come up with a stupid idea. She goes back to the casino, and just kneels down in the middle of the floor and starts praying. She stays like this for what must be hours, and slowly but surely a crowd starts to form around her. No one knows what she’s doing, but more and more people arrive to start gawking at her. Which gets the attention of the statistician who runs the casino. He arrives and tells Marge that they’ll give her back Homer, and not even care about the money, because all of the people looking at her and not gambling have now lost the casino more than she won anyway. So Marge and Homer are free to leave the casino, the church is rebuilt, and we’re left with the question of why counting cards is against the rules anyway. 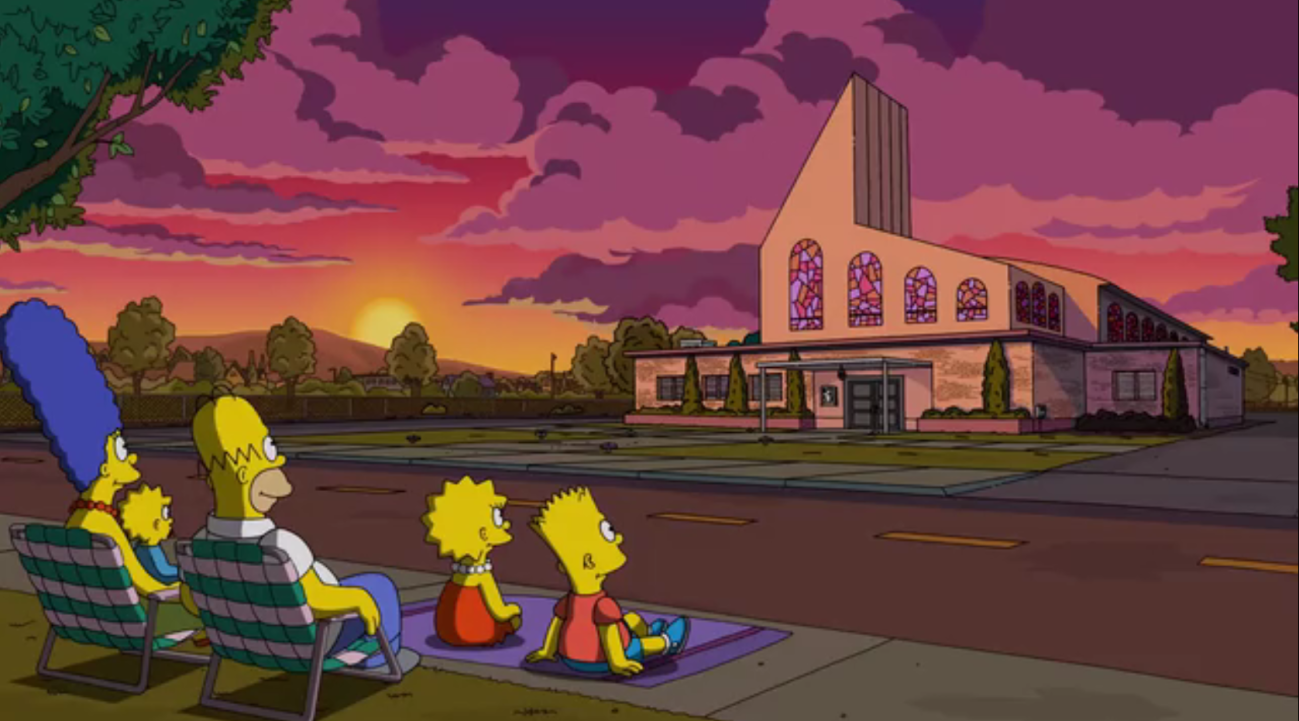 I actually had a lot of fun with this episode. In theory the idea of “Marge and the church council fundraise to save the church!” seems like one of the least interesting plot summaries I could ever come up with, but it worked for me. Having a group of the least likely Springfield citizens orchestrate a complicated card counting scheme is pretty fun, and I liked seeing these stuck-up church characters letting their hair down and having some fun. Yeah, they didn’t really talk about the fact that Marge has a canonical gambling addiction, but whatever, that was more than twenty years ago. Plus, the episode really has a lot to say about the whole idea that card counting being against the rules of a casino is kind of ridiculous. It’s not illegal, and it’s actually just being very good at the game. They just don’t like it because it makes it harder for them to take money from dumb people. Oh, and I got to see Chief Wiggum in a jetpack. That counts for a lot.

Take Away: Counting cards is lucrative, but dangerous, for reasons that are questionable at best.

“Sky Police” was written by Matt Selman and directed by Rob Oliver, 2015. Tagged as: 2015, Lifetime of Simpsons, Season 26, Sky Police, the Simpsons