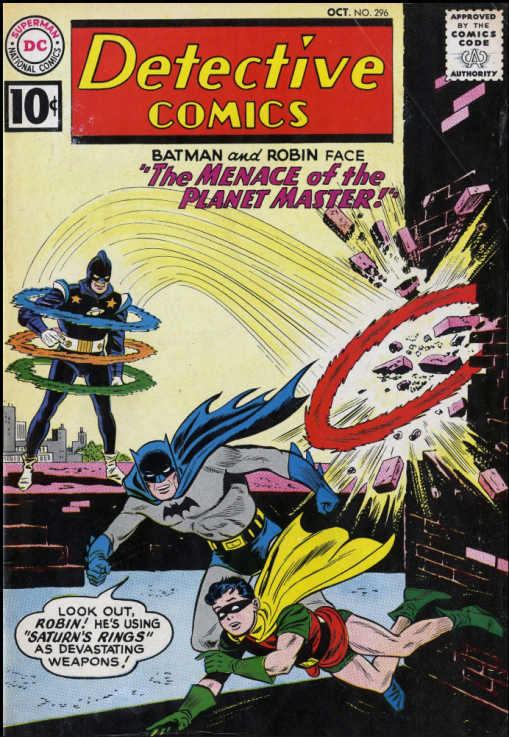 Hi there everyone, and welcome back to Bat Signal, my ongoing quest to read every issue of Detective Comics in random order and with very little context. And, unfortunately, the random number generator gods have not smiled upon us to deliver a properly spooky Halloween issue to discuss today. Last year we got both an issue with Batman fighting a vampire and one with the Scarecrow. This year the best we got was some hillbilly’s thinking a ghost was ravaging their family instead of just alcoholism. And today, we just have a goofy Silver Age tale. It’s pretty fun, it’s just not exactly what I was hoping for. I really thought about cheating, finding something with Scarecrow or Man-Bat or something in it, but I decided to honor the confines of this stupid thing I do, and just talk about the story that I’ve had selected. Let’s do this thing.

Things begins with Batman and Robin driving around the Batmobile, just going on their nightly rounds when they notice an oddly dressed man walking around at night. Which is enough to raise some red flags here in Gotham, especially when the man appears to light on fire that’s hot enough for him to melt through a wall and into the jewelry store he’s chosen. Batman and Robin race in to find the man stealing jewels with an asbestos sack. When he notices the Dynamic Duo he decides to loudly identify himself. He claims to be the Planet Master, a new villain who has suits designed to replicate various aspects of the planets, in this case the burning heat of Mercury. Although as he finishes this explanation Robin just uses a fire hose to extinguish the Planet Master’s flames. That doesn’t stop him though, and the Planet Master flees from the building, and rapidly melts some steel pipes, sending a flood of molten steel down the hill towards Batman and Robin who have to dive into a sewer to avoid a fiery death.

When the steel cools Batman and Robin leave the sewer, only to find the Planet Master gone. But, while debriefing they decide that since there’s several other planets they can expect the Planet Master’s crime-spree to continue. Which is accurate! Because over the next couple of days the Planet Master continues to strike, using a series of suits that he built around some knowledge he gained from an elementary school report on the planets. He manages to rob a museum with a Venus suit that sprays out a layer of thick fog that disorientates the guards, and robs a ship floating down a canal with a Mars suit themed after the Martian canals. Which is a bit of a stretch.

But Batman and Robin finally catch up with the Planet Master when he tries out his Jupiter costume. And it’s kind of a weird decision. He’s invented some sort of helmet that has a ray-beam attached which can enlarge whatever he blasts it with. Like I said, weird call. So the Plant Master robs an armored car, causing the guards’ guns to grow so big they crush the guards, when Batman and Robin arrive. The Planet Master knows that he can’t take on Batman and Robin with  just his beam, so he flees, causing some mechanical birds a man is selling on the street to grow as a distraction. Which works,  but also causes Plant Master to drop his helmet, breaking it. He does manage to escape, but Batman finds the beam, after it wears off and shrinks he mechanical birds back down to normal, letting him investigate the Planet Master’s gizmo.

Batman is able to track down the parts used in the helmet, and it eventually puts him in contact with a renowned scientist named Professor Norbet. Batman and Robin burst into Norbet’s house in the middle of the night to interrogate him, and he’s absolutely shocked. He has no idea who the Planet Master may be, and promises to tell them if he figures something out. But after they leave he begins poking around his lab, and is shocked to find the various Planet Master costumes in a hidden closet. He calls up Batman and Robin, and tells them that the only person who would know about that closet would be a former assistant named Edward Burke.

Luckily they know that the Planet Master is hiding his suits at Professor Norbet’s lab, so they head back to wait out the arrival of the criminal. And, as luck would have it, Burke is already there, waiting to steal the costumes. Which is when he finds something shocking. The Planet Master, who is certainly Professor Norbet. There’s only one problem. He doesn’t know he’s the Planet Master. Apparently Norbet found a meteorite, and when he examined it he was blasted with some weird space gas that gave him occasional madness. So he doesn’t even know that he’s the Plant Master. Batman and Robin then arrive, and of course assume that Burke is behind it all, until they find Norbet. Burke tries to turn on them all, but the Dynamic Duo knock him out easily enough, and apparently Norbet is safe now.

This is a pretty fun little issue. It’s one of those goofy little issues that I’ve become so fond of, where Batman and Robin have to deal with some random new freak-of-the-week who drags them all around town. Unfortunately we don’t get any trips to the vast woods outside of Gotham City, but we still do get a ridiculous villain with a pretty stupid and fun gimmick. The idea of seven different suits, all with various powers that tangentially relate to the planets is a pretty great idea, and while some of them made more sense than others, it was still a pretty clever issue that gave Batman and Robin some weird things to bounce off of. There’s not a whole lot to the issue, it’s just some good fun. It would have been nice if the Planet Master was also a ghost or a mummy or something to fit in with Halloween, but that’s okay.

“Menace of the Planet Master” was written by Bill Finger, penciled by Jim Mooney, and inked by Charles Paris, 1961.