After yesterday’s fun little Warriors parody, how about we calm things down a bit with an episode full of awkward encounters and social interactions. Because what else are you going to get with an episode about art theft?

The episode begins with Homer waking up for the day, and noticing a series of notes hidden all around the bedroom and the bathroom, all indicating that Lisa wants a guinea pig. This is apparently not a new occurrence, and it’s starting to drive Homer and Marge insane. Lisa has been hounding them for a guinea pig for quite some time, and they’re both getting ready to lose their minds. Hell, Lisa even has convinced Lenny and Carl to harass Homer about guinea pigs at work. That’s dedication.

But eventually she reaches a breaking point for her parents, and they finally decide to let her get a guinea pig. As long as she signs some complicated forms that will bind her into taking care of the guinea pig and burying it when it dies. Lisa of course signs the paperwork immediately, and they head out to buy a guinea pig! But, for some reason, they don’t just go to a pet store or something, and instead drive out to the country where some sad old woman runs a guinea pig “rescue” out of her presumably horribly smelling home.

Lisa then begins looking at all the guinea pigs, and quickly runs into a problem. She loves them all, and can’t chose. Lisa then spend the entire day looking at the guinea pigs, unable to decide which one she wants. Hell, the family even have to end up spending the night at a nearby motel because she can’t decide. But the next morning she finally makes her decision, and buys a regular guinea pig that she names Pokey.

Lisa and the rest of the family finally return home, with Pokey, and Lisa starts to go overboard immediately. She builds an intricate habitat for Pokey, even putting in Peruvian art to give Pokey some happiness. However, while Bart is mocking Lisa about the design of the habitat, Pokey escapes. The kids chase after Pokey, and it eventually gets away from them, and enters a mouse-hole in the wall. They start freaking out, and after a moment Pokey comes ripping through the wall, above the couch, and it ruins the painting of the sailboat in the progress. 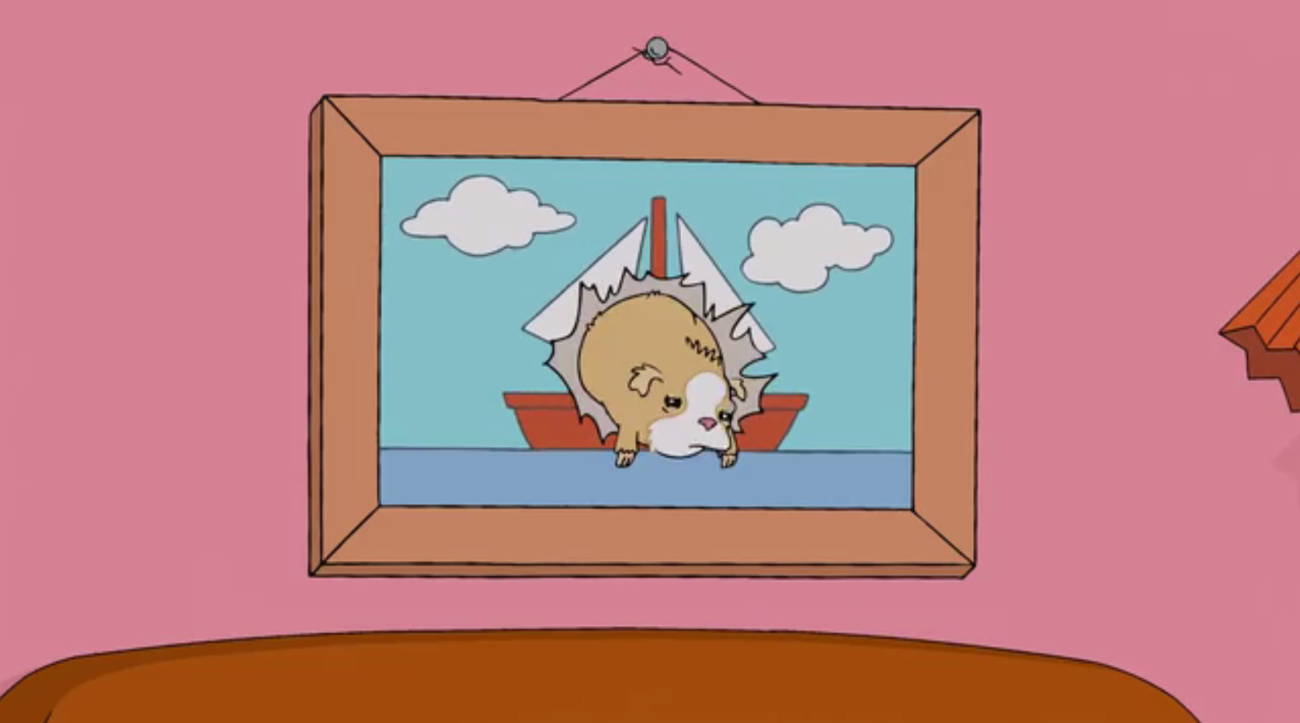 At which point, Pokey is no longer relevant. This isn’t an episode about Pokey the guinea pig, it’s about that damn sailboat painting. Because when Marge realizes the painting is ruined she becomes very distraught, and decides that they need to go buy some more art to hang over the wall, because it was the only bit of culture in the house. So they hit the town, and end up finding a really pretty painting of a seaside village at a garage sale that the Van Houten’s are having.

The Simpsons buy the painting from the Van Houten’s and return home to put it above the couch. However, Marge finds the frame that Kirk had really ugly, so she removes it. And, when the frame is gone they notice that the painting is signed by Johan Oldenveldt. After a cursory Googling, the family finds that Oldenveldt is actually a famous painter, which means that this random piece of art they bought at a garage sale is probably worth a lot of money.

Homer is immediately interested in this painting for the first time, and convinces the family to take the painting to an appraiser to see if it’s actually worth something. And, surprisingly, it is. In fact, they tell the family that it could probably fetch $100,000 at auction. So, of course, Homer wants to sell this painting as soon as possible. But Marge objects. Not because she loves the painting, but because she thinks that they should at least split the money with the Van Houten’s, since it was their painting and they didn’t know what it was worth when they sold it to them.

Homer thinks that this idea is insane, and of course suggests that they keep this a secret from the Van Houten’s and never mention it again. But Marge just won’t give up her position, insisting that the right thing would be to share the profits with them. This leads to a huge, multi-day fight between Homer and Marge, while the two start debating the principles of ethics. And, after several days of fighting, Homer finally wins, and Marge agrees to keep the money a secret and never tell the Van Houten’s.

Unfortunately, they reach that conclusion out loud, while Milhouse is nearby. He really doesn’t understand what they’re talking about, but Homer and Marge decide they need to bribe him into silence regardless. So the Simpsons take Milhouse on a shopping spree, buying him all sorts of toys in exchange for his discretion. Which, he almost immediately breaks, because the next day the Van Houten’s arrive at the Simpson’s house, furious for what they’re planning.

The Van Houten’s are so angry that the Simpsons would screw them out of money, and because they’ve gone this far Marge and Homer have to double down and insist that they’re doing nothing wrong. The two families then decide that they’re enemies now. Marge keeps wavering, figuring that maybe they should do the right thing and help the Van Houten’s, but Homer keeps reminding her that they’ll finally be able to have a money cushion and not live paycheck to paycheck. And, in response, the Van Houten’s get Kent Brockman involved, and he succeeds in spreading the story all around town. 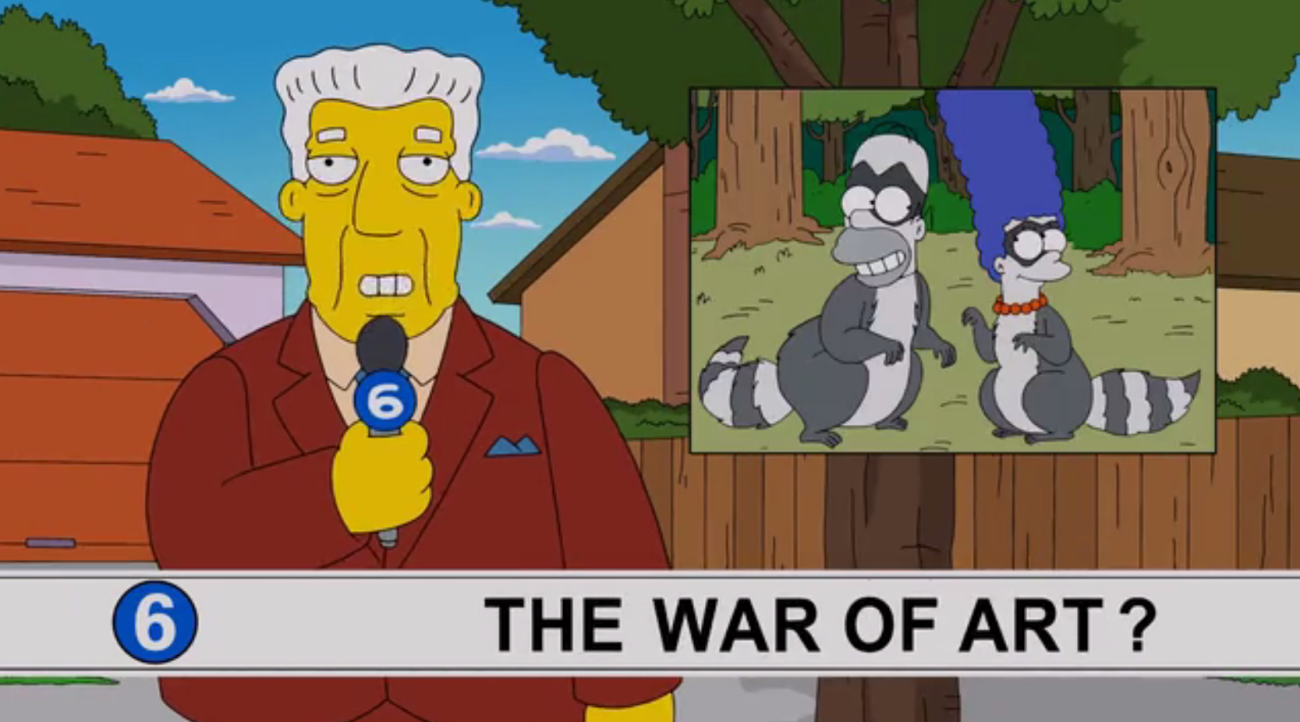 But, because this is Springfield, something odd happens. People don’t immediately take the Van Houten’s side. About half of the town does, the other half takes the Simpson’s side, which results in a weird Civil War in the town, with two sides being drawn up. But the Simpsons are able to ignore this, more or less, and the day of the auction finally arrives. The Simpsons fight through the two different crowds, and get ready for the auction.

However, things aren’t crazy enough yet, so while the auction is taking place a woman named Dawn comes marching in and demands that the auction end. She turns out to be a woman that dated Kirk during his time divorced from Luanne, and she claims that he bought the painting for her, so it’s actually her property. This whole thing has gotten so ridiculous, so the auctioneer says that the auction will be put on hold until they can figure out who actually owns it.

Homer then decides that they need to prove that Kirk actually bought the painting, which would mean that it’s legitimately Homer’s. And luckily, Kirk is now staying with the Simpsons because Luanne kicked him out over this whole Dawn thing, which is ridiculous because Luanne dated a whole bunch of dudes when they were divorced, but whatever. Kirk tells Homer that he bought the painting from a little bistro at an artistic little beach community.

Unfortunately, while they’re talking a man at the bar speaks up. His name is Klaus Ziegler, and he says that the painting they’re all fighting over wasn’t painted by Johan Oldenveldt, it was painted by him. The Simpsons are pretty wary about this, but Ziegler convinces them to follow him to his home. And once there he reveals that he’s a professional art forger, and he forged that Oldenveldt. They all have a quick debate about the ethics of art forgery, but it becomes evident that Homer’s whole plan has been foiled. So, he asks for Ziegler to paint him three different painting. A sweet one of the Van Houten’s to get Kirk and Luanne back together, a recreation of the sailboat for Marge, and a lame jukebox for Homer.

I think overall I enjoyed this episode. It’s a premise that we haven’t seen before, and I think that overall it was fun and weird little episode. I like the idea that the Van Houten’s, the eternal losers, would have a painting that they had no idea was worth something, and I think the whole ethical debate the surrounded this episode was a lot of fun. Homer and Marge each make good points, and I think it’s actually a problem that would be incredibly hard to figure out in real life. Money can rip anyone apart, especially two couples that are barely friends, and the ensuing awkward fallout is very realistic. And then, the episode gets even weirder when they find out that it’s all bullshit. The whole Dawn thing is a little superfluous, and just served to get them to the art community, but then we get a very interesting look at the ethical ramifications of art forgery. I think they have Ziegler make some good points, discussing the idea that if the art elicits an emotional response, who cares if it’s legitimate or not? It’s been a while since I’ve seen a Simpson’s episode that has this many ideas that required some ethical thoughts, and I really enjoyed that.

Take Away: Art forgery is a complicated, and apparently profitable, issue.

“The War of Art” was written by Rob Lazebnik and directed by Steven Dean Moore, 2014.