Hey there everyone, and welcome back for another week of Lifetime of Simpsons. And, let me say, we have a better week than last week. Still not what I would call a great week, but certainly stronger than what we had last week. And it all starts with today’s incredibly strange and somewhat disturbing episode. But at least is starts with a fun couch gag from Sylvain Chomet that’s styled after the Triplets of Bellville. That’s neat!

The episode begins with the citizens of Springfield sitting in church, listening to Reverend Lovejoy end some sort of sermon that appeared to be based around him just trash talking the kingdom of Moab. Not sure what’s going on with that, but luckily this somehow segues right into Lovejoy introducing the people to a visiting Indonesian pastor who wants to say some words to the people of Springfield. And Bart is not interested.

The guy starts telling them all about the poverty of Indonesia, and Bart just keeps ignoring him, making a pretty big show about how little he cares about the man. So, changing tactics, the man starts to describe a boy from his village who resembles Bart. He tells them all about his pranks, and ends up getting Bart to relate to the kid. And, once Bart is invested, the pastor explains how the boy needs some serious medical attention.

He then starts asking for money, and because Bart is so invested he starts harassing Homer and Marge to give him some money to donate. And, after a lot of heckling, Homer gives in and gives Bart twenty bucks to give them. However, as soon as Homer gives Bart the money, Homer immediately starts trying to get the money back. We then see a montage of Homer doing everything he can to basically non-stop harass Bart about paying him back, and it starts to wear him down.

In fact, it wears him down to the point that one day at school he just snaps. After Homer texts him a request for the money Bart decides to do something insane. He loudly tells the kids on the playground that he’ll eat whatever they have for money. And, because kids are stupid, they take him up on it, and have Bart start eating gross things. It’s all pretty ridiculous, but it of course escalates to the point that Jimbo and the bullies offer Bart the full twenty bucks if he eats one of the frogs the school has for dissections.

Bart really wrestles with this possibility, and people warn him that if he does it he’ll always be ‘the kid who ate a frog.’ But, Bart really wants that twenty bucks, so he goes through with it, much to the horror of all the kids watching. And, as an added bonus, Bart immediately passes out. He’s then rushed to the hospital, where he’s taught that formaldehyde isn’t something that a person should eat, regardless of the monetary reimbursement.

Bart gets back into fighting shape pretty quickly though, and soon is back in school. However, when he gets there he finds that the story of him eating a frog has spread all around the school, and he’s been made a pariah. No one wants to be with Bart, not even Milhouse, and he finds himself as the loneliest kid in school. And, because they’re psychopaths, Jimbo and the bullies decide to start harassing Bart, even though they’re the ones that made him do it.

But, as the bullies are about to beat up Bart, they’re suddenly attacked by a falcon. They run away, and Bart learns that the falcon belongs to a new boy named Digby who goes by Diggs. He’s new to Springfield Elementary, and notices that Bart is just as lonely as him. So, in the hopes of finding a new friend, Diggs takes Bart to a strange part of the school that Bart has never notices. It’s a room for a falconry club that the school has long since forgotten, and Diggs has managed to somewhat bring it back to life, primarily to have somewhere to hide.

Bart really quickly clicks with Diggs, and the two start spending a lot of time together, hanging out with the falcon and getting to know each other. And, surprisingly, Homer is really down with Bart hanging out with a weird older kid, figuring that Diggs can be Bart’s Moe. So the two boys continue to spend time together, as Bart slowly becomes a closer friend with Diggs, and starts to learn the basics of falconry.

However, one day while the boys are hanging out, they climb up into a tree in the woods, and their conversation turns in a weird direction. Diggs starts talking about the majesty of flight, and tells Bart that he’s convinced he knows how to fly too. So, Diggs leaps off the branch, falls straight to the ground, and breaks his arm. Bart is terrified by this behavior, but gets down to help Diggs, and brings him to the hospital, where Bart starts to get very worried. Because Diggs doesn’t seem to think what he did was insane. In fact, he’s still convinced that he’s going to be able to fly some day.

And, after that little incident, Bart finds out that Diggs is getting transferred to a different hospital. A mental hospital. Apparently Diggs has been diagnosed as a paranoid schizophrenic, and he’s going to be kept away for a while until his medication can behavior can get under control. But Bart doesn’t understand this. He wants to hang out with Diggs, and nothing Homer and Marge can tell him makes him understand what’s going on with Diggs.

Bart becomes very depressed about all of this, but his spirits are a little lifted by taking care of Diggs’ falcon. However, one day Bart decides to check back in on the weird falconry club room, and finds something shocking. Diggs. Bart obviously thinks that Diggs has escaped from his mental hospital, but it turns out the truth is weirder. Diggs has been released temporarily so that he can participate in a falconry competition, and he wants Bart to help him.

So Bart and Diggs take the falcon and they head to the very sad little falconry competition. But, when they get there Bart finds that Diggs has some ulterior motives. He has devised a plan to free all of the falcons, because he doesn’t want them to be forced into competition anymore, and thinks they should be free. Bart goes along with the plan, and they successfully free all of the birds. And, with that weird little bit of vandalism done, Diggs returns to the hospital, and Bart says goodbye to him forever.

This is a very weird episode. Honestly, as I was watching it I was a little shocked at how similar it felt to the episode “Lisa the Drama Queen,” that episode where Lisa befriends a weird little girl who we gradually learn is unhinged from reality and keeps thinking that she lives in the fantasy world that they’ve created. The only difference is, this time a medical professional managed to diagnose the weird friend. Seeing Bart befriend a kid and slowly realize that he’s not well is something that should be more interesting than this episode ends up being. And I think the problem is that they don’t do enough with Bart figuring out what’s wrong with Diggs, and coming to terms with the fact that Diggs isn’t okay. They just kind of drop that on us at the end, and then leave us in a place where Bart didn’t seem to learn anything. I don’t know, it just felt like kind of a half-baked idea that didn’t really reach any particular point.

Take Away: If you need somewhere to hide in school, start a falconry club.

“Diggs” was written by Dan Greaney & Allen Glazier and directed by Michael Polcino, 2014. 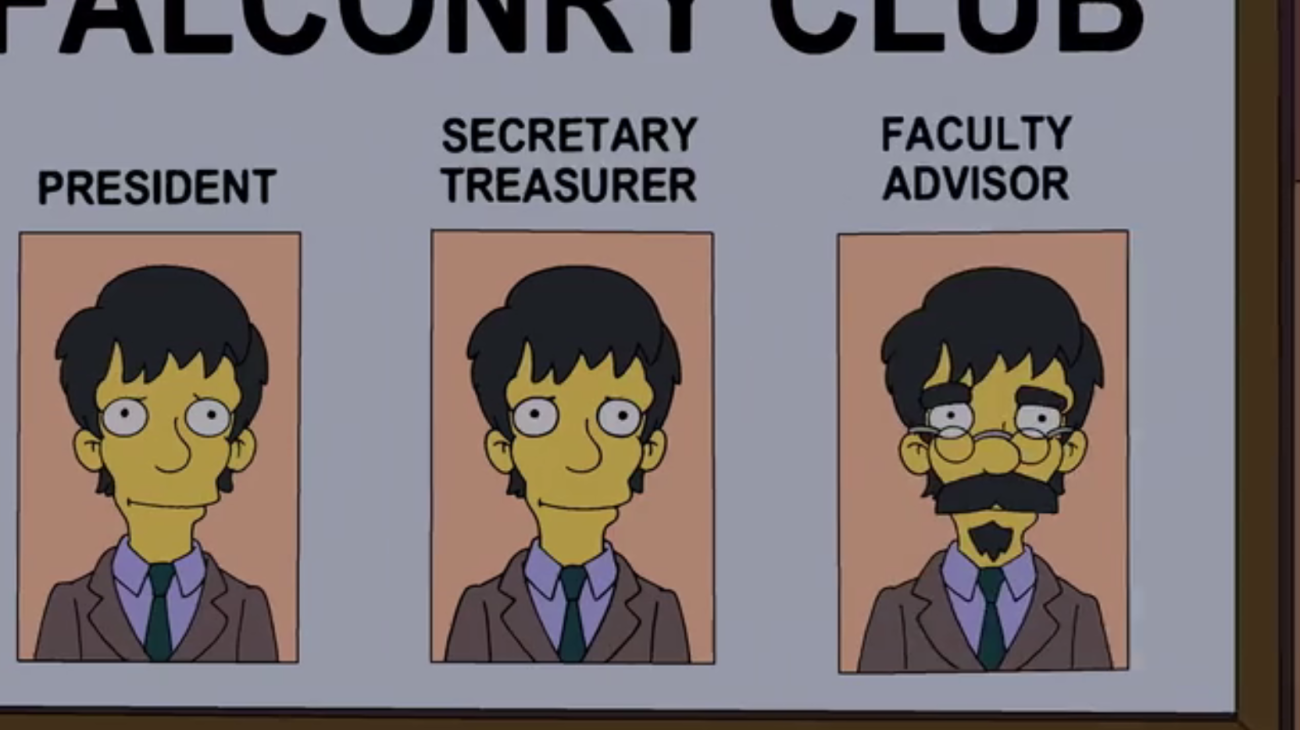