Hello everyone, and welcome back to Bat Signal, my ongoing quest to read every issue of Detective Comics in random order and with very little context. And folks, the random number generator gods have given us quite an issue to talk about today. It’s…unconventional, to say the least. Because, we’re getting an issue that really doesn’t feature Batman. He does finally show up near the end, but for the most part this is a story about Harvey Bullock, the boorish detective in the Gotham City Police Department. We’ve had an issue similar to this before, when we had a whole issue from the Riddler’s point of view, and that was just as weird as this one. But this one is helped by the fact that we get to learn a whole lot about Harvey Bullock. Honestly, more than I’ve ever known before.

The issue begins with Harvey Bullock loudly walking around the headquarters for the Gotham City Police Department, eating a sandwich, calling people by the wrong names, and asking everyone if they know where Batman is. And this isn’t just some weird joke he has, he’s legitimately asking. Because Bullock has apparently gotten some information about a gang that Batman has been taking down, and wants to give it to him. Unfortunately, Harvey doesn’t seem to understand that they can’t light the Bat Signal during the day, so Commissioner Gordon tells him to just go wait until night fall. Bullock figures that this is a good plan, and heads home to the terrible neighborhood he lives in. He drives his terrible car home, planning to check out some revival screening of some movies at a nearby theater, when he comes across some local gang members. They’re members of the Skull Smasher gang, and they’re having a “friendly fight” in front of Bullock’s apartment. So, Bullock has no choice but to humiliate one of the kids and rough him up a bit. But surely this kid isn’t going to hold that against Bullock, right?

Oh, never mind. Anyway, we then see Bullock head into the rundown building where he lives, only to learn something pretty shocking. Harvey Bullock’s apartment is  immaculate, tastefully designed, and full of classic film posters and movie memorabilia. Yeah, apparently Harvey is a huge movie buff, and his whole gruff detective aesthetic is just that, a persona. Harvey isn’t actually a grizzled old bastard, it’s basically just a role he plays. We gets a glimpse into Harvey’s internal monologue and find that he’s actually a pretty refined guy with some great taste in movies. He strolls around his apartment, looking at the various posters and appreciating them while thinking about little compliments for the different classic actors.

Harvey’s little stroll down his cinematic memory lane is brought to and end though when he gets a call from headquarters. Apparently someone has arrived at headquarters with information on a case Harvey’s working, and he refuses to tell it to him over the phone, insisting that Harvey drive back to headquarters and discuss it in person. This irritates Harvey, especially because it’ll cause him to miss the movie screening he’s been thinking about, but he decides to go through with it. He drives back to the police headquarters, only to find that the person who called in with information has already left. Bullock’s pretty pissed off about this, but when he learns that the kid who had been there was a member of the Skull Smashers, he panics. He realizes he’s been tricked, and races home, only to find that something horrible has happened. 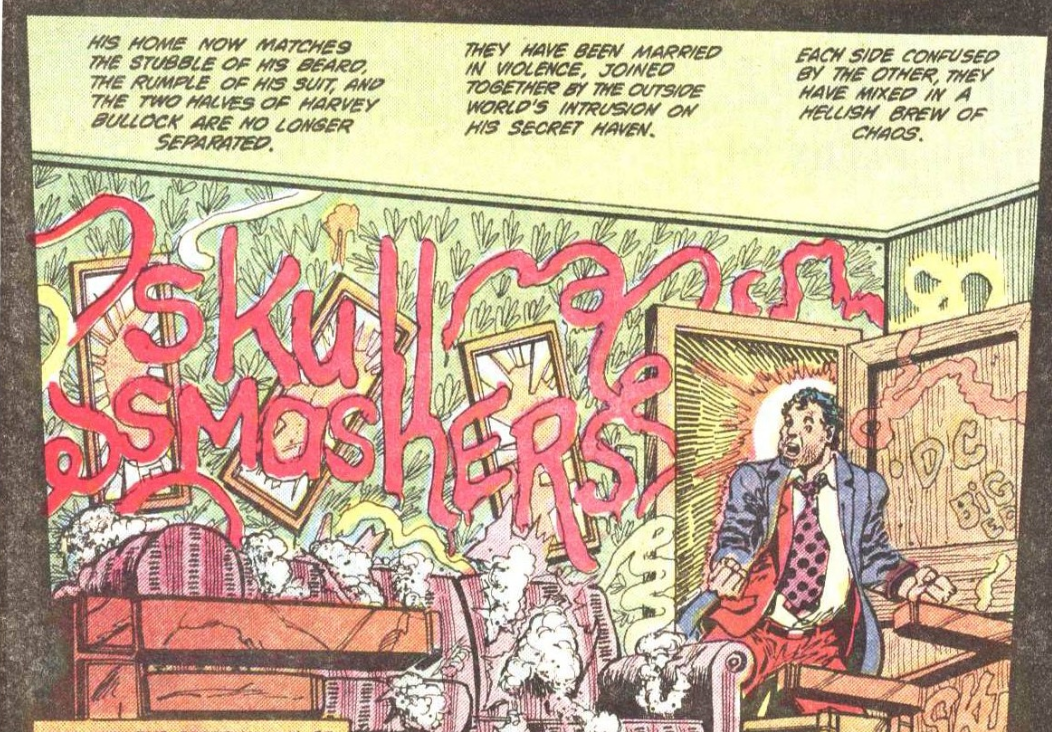 Yeah, turns out that the person who came to headquarters didn’t have any information for Bullock, they just wanted to get him to drive all the way out to headquarters, giving the kid who Bullock humiliated earlier a chance to break into his apartment and trash it. And Bullock is infuriated. His inner sanctum, the only place where he can be himself, has been destroyed. And now he needs revenge. Bullock storms out of his apartment, and starts trying to track down the stupid kid who destroyed his house. And, after very little searching, he finds the kid in an alley, throwing away the spraypaint that he used to vandalize the apartment.

Bullock starts yelling at the kid, just venting some of his anger, when the kid decides to escalate things. He pulls out a switch blade, and gets ready to attack Bullock. So, with no other choice, Bullock start whaling on the stupid kid, kicking his ass up and down the alley. But, when that’s taken care of, Bullock finds the rest of the Skull Smashers, ready to beat him up. Luckily though, as Bullock is about to have a last stand against a group of violent teenagers, Batman arrives. He’s heard that Bullock has been looking for him, and just happened to stumble upon him right before he got his ass kicked. So, Batman and Bullock defend themselves, beating up wave after wave of Skull Smashers, tossing off a lot of pithy one-liners, until all of the gang members are defeated. And, as the final gang member flee from the scene, Bullock regains a bit of his soul, and decides to show some kindness and take the kid who started the whole thing to the hospital, while Batman just kind of stands there.

This is a very strange issue. I really like the strange aspects to Harvey Bullock’s life that this comic introduces. I have no idea if any of it was ever actually made part of his character, but I think the idea that he’s actually a pretty cultured and sensitive man who pretends to be a grizzled noir detective because he thinks that will make it harder for this tough job to get to him. That stuff is really great. What’s not so great is seeing Bullock and Batman gleefully beating the shit out of a bunch of teenagers. Yeah, Bullock is justified in being furious at the idiot who trashed his home, but beating the kid up is another thing. And then when some random other kids who have nothing to do with this whole thing, and they also get whaled on. It’s just kind of a weird story choice, but I also know that just seeing having a character piece about Harvey Bullock and his love of movies would have made for some very boring comics, so I get that they had to put some action in it. 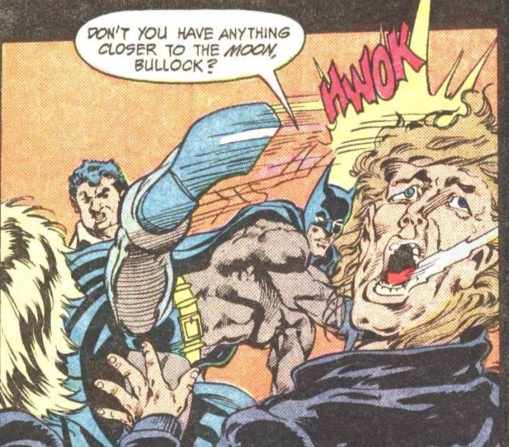