The Bear-Knuckle Prose of She Rides Shotgun 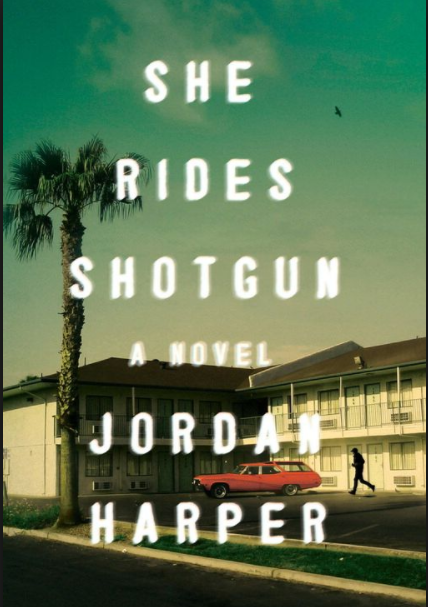 Crime has always been a topic that I’ve been greatly interested in. And I’m certainly not alone, because for whatever reason it seems like a vast majority of people in the world are truly fascinated by the idea of the committing and solving of crimes. I mean, just look at the staggering amount of movies and television shows that focus on the topic. I actually was so interested in the topic that I ended up with a degree in criminology. Yep, super helpful. But it was incredibly interesting, and I don’t regret learning about it at all. Learning why some people commit crimes, and why most don’t, is a very engaging topic, and one that makes for extremely compelling stories. I’m always on the lookout for new stories that take on this idea and lend some insight to it. So, despite the frankly embarrassing amount of books that I still need to read I decided to check out a rather recently published novel, She Rides Shotgun. I heard a lot of praise for this novel from sources that I trust implicitly, and couldn’t help myself from checking it out. And I’m very happy I did, because this novel is an incredibly affecting story.

She Rides Shotgun tells the story of a girl named Polly McClusky and her father Nate. Nate has been in and out of prison for most of his life, mostly theft and robbery, and has barely been a part of Polly’s life. He had every intention to turning his life around and going straight when he got out of prison this time though. Until he runs afoul of a white supremacist gang known as Aryan Steel right before he was released. Things escalate to the point that a hit it put out on Nate, his ex-wife, and his daughter. Nate is unable to save his ex-wife, but is able to pick up his awkward daughter Polly. Polly is of course uneasy around Nate at first, but when she realizes that he’s the only family she really has left the two stick together, and focus on survival. They bond for a bit, getting to actually know each other while Nate teaches Polly a thing or two about self-defense, while staying one step ahead of the Aryan Steel members who are trying to  kill them. But, eventually, they realize that they can’t spend the rest of their lives just fleeing from shitty skin-heads. They’re going to need to do something bigger.

Nate and Polly decide that they need to get the hit taken off of them. And the only way that they see this happening is to become a big enough pain in the Aryan Steel’s ass that they have no option but to give up on them. So Polly and Nate become professional irritants, hitting the Aryan Steel’s drug operations whenever they can, bleeding them dry. They even abduct a woman who helps smuggle drugs and money into the prison system for the Aryan Steel higher ups, who Nate ends up falling for. However, despite hitting so many operations they just can’t seem to get the attention they need. So, after a bit, Nate comes up with an even crazier plan. They manage to set up a meeting with a competing prison gang, and offer to do anything for them to kill the leader of the Aryan Steel. And, it just so happens, these gang members have the perfect person in mind. A corrupt sheriff in the middle of the desert who works with the Aryan Steel and who has created a whole city to make meth. Nate and Polly then head out to the desert, and against all odds, bring down the sheriff. Nate is mortally wounded in the process, but he succeeds in his ultimate goal. Polly is safe.

This novel is a hell of an experience. I know that the term ‘visceral’ gets thrown around a lot, to the point that it’s lost all meaning, but it’s the word that most came to my mind reading this novel. It doesn’t mince words. There’s a certain bleak honesty to the book that just slaps you across the face. It’s an ugly story about an ugly world and it doesn’t try to hide any of that. The novel is written with a beer-swilling and angry sense of purpose. At its heart it’s a simple story, a tale about a father and a daughter just trying to get by in the world. But it’s woven into an incredibly realized and beautifully unappealing world. It’s a world full of crime, full of people doing what they must to survive, resorting to their most animalistic impulses. Which is of course not going to be a very supportive environment for a story about familial reconciliation. And yet, it works. We see characters in this story commit crimes for greed, addiction, lust, and a whole multitude of other typical reasons. But then we’re shows a father and a daughter who are forced into a life of crime because of love. They’re all that they have in the world, and they’ll do anything to keep each other safe. They’re a partnership, struggling to survive and doing whatever they need to do to do so.

She Rides Shotgun was written by Jordan Harper, 2017.