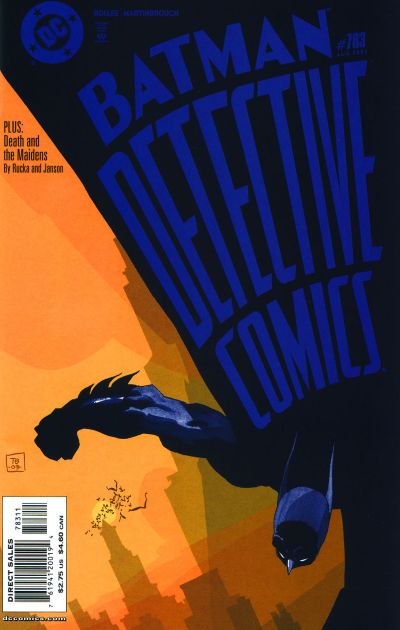 Hi there everyone, and welcome back to another installment of Bat Signal, my ongoing quest to read every issue of Detective Comics, in random order. And we have something special today folks. For whatever reason the random number gods that dictate which issues I pull each week haven’t really given me that many issues from the later bit of the series. I’m considering adding in the New 52 and current run of Detective Comics to the list so they can be discussed as well, but for now my choices end when the original DC universe collapsed into the New 52. And today we have a rather late entry to that run, and one that’s a whole lot of fun. I had kind of gained the impression that the stories from this era of Detective Comics had more or less abandoned the old story-a-week format and just become another ongoing Batman title with huge multi-issue arcs. But today we actually get a self-contained story that’s actually full of down-right detection. Which is a serious delight these days.

The story opens up by showing us a little boy, twenty-two years ago, sitting alone in his room and desperately trying to draw a picture of his mother. We see through his internal monologue that his mother is incredibly over-bearing, and never satisfied with his work. So he’s really trying to make it perfect. But when he finishes, she just rips it up. Hey, that surely isn’t going to contribute into raising a serial killer! Anyway, that’s just a bit of foreshadowing, and once that’s taken care of we cut back to the present, where Batman is hot on the case of a mysterious killer. We learn that four times in the last month Batman has stumbled upon mysterious skeletons, burned and missing their teeth.

The skeletons have been found all over town, and there doesn’t seem to be anything linking them together. The fact that they’re burnt and missing teeth does make it difficult to identify them, but Batman uses his technology to reconstruct the skeleton’s features, finding the identity of the four corpses, but still doesn’t come across anything to help him figure out what the pattern is. And, because Batman can’t figure out any leads, he decides to go ask a police officer. Now, I’m not sure who this officer is, because I don’t recognize her, but she and Batman seem to have some chemistry, and they’re able to bounce ideas off each other. She’s worried that it may be Two-Face, since it’s been two men and two women, but Dent has been in prison for a while, and he’s cleared. So, with no help, Batman heads off to continue pondering what’s going on. Oh, and we get another flashback to that kid from the beginning, who is now a teenager and playing baseball obsessively, trying to become perfect for his mother, who doesn’t care again.

We then see Bruce Wayne heading into Wayne Enterprises the next morning, still thinking about the mysterious skeletons. He drifts through the day, knowing that there’s something about the case that he’s missing, but unable to figure it out. Then, as night begins to fall and Bruce is sitting in his boardroom, thinking, he finally realizes what he missed. The latest corpse, a woman named Katie Warren, used to work for Wayne Enterprises. Bruce goes and investigates Warren, and finds that she was recently let go when an efficiency expert arrived and deemed her unnecessary. He also finds that she doesn’t seem to have any relatives or close friends, since all of her emergency contact information was left blank. Which makes Batman start to worry that he’s found the pattern. And, he’s right, because we then check back in on our mysterious loser, and see that eight months ago this man was fired from his job, and he decided to start a new career as an efficiency specialist. And, getting into the swing of things, he decides that his own mother is inefficient, and murders her. So yeah, this man named Alan Tuck has decided that it’s his duty as an efficiency expert to find people who are inefficient at life, and remove them. Seems like a cool dude. And he’s recently been hired by Wayne Enterprises to fire several people, Katie Warren including. Bruce also manages to find another woman, Peggy Sutton, who has been let go and fits the profile of the other victims. Batman then races off to find Peggy, as we see Alan Tuck arrive at her apartment. Batman reaches the apartment just a tad too late, and finds Peggy gone. But Tuck wasn’t able to get far, and Batman is able to chase him up to the rooftops. Tuck does his best to shoot at Batman, but ends up panicking and just throwing Peggy off the roof, hoping to distract Batman while he could get away.

Batman obviously saves Peggy, but then gets hot on the heels of Tuck, following him as closely as possible. Tuck manages to get inside a car, and races off into the night, assuming that he can get ahead of Batman, since he’s times his getaway perfectly so that he crosses off some train tracks right as a massive freight-train arrives, cutting off the police. Unfortunately for Tuck, he didn’t take the Batmobile into account. Batman is able to get around the train, and chases after Tuck, getting in a high-speed chase. Well, until they reach a portion of the escape route that Tuck hid a IED in. The bomb momentarily stops the Batmobile, but he’s quickly able to chase after Tuck, until the two end up on a bridge. Which is when Tuck does some efficiency on himself, and decides it’s time to end it. Tuck attempt to kill himself by driving off the bridge, but Batman is able to swing in at the last moment at save Tuck, making sure no one dies.

I actually really enjoyed this issue. It may just be because I’ve had a serious lacking in real detective stories. But I think beyond that simple aspect of the story there’s a lot to like about it. There’s actually very little spoken dialogue in the issue, instead focusing on a lot of really fun and pulpy narration boxes, which I feel like normally would have felt a little lazy, but really worked for this story. I will say that the foreshadowing of this psycho killer was maybe a little much, but I suppose if we hadn’t learned who Tuck was then it would have been a story that was impossible to figure out for the reader. But whatever, it was a fun and pulpy detective story that was self-contained. Which sometimes is all I need from an issue of Detective Comics.

“More Perfect than Perfect” was written by Paul Bolles, penciled and inked by Shawn Martinbrough, colored by Jason Wright, and lettered by Todd Klein, 2003. 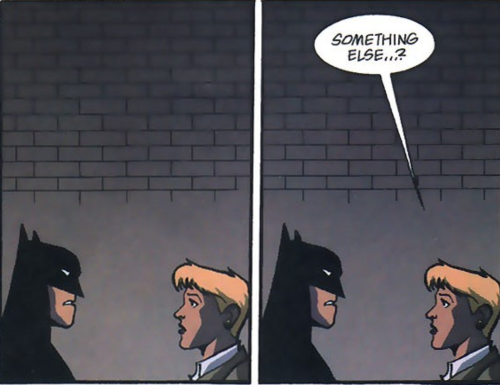