Hey, remember how on Monday Krusty made a joke about how lame it was that Itchy and Scratchy did a Social Network reference, when that movie was several years old at that time? They explained that it was due to the time to takes to animate the show, but that doesn’t make it any less lame? Well that was foreshadowing, because today’s episode is a Social Network parody. Neat.

The episode starts off immediately with the Blue Haired Lawyer berating Lisa in court. He’s saying that Lisa’s actions have brought devastation to the town, and she’s going to have to pay for this. Which is not exactly what you expect to see when you start a Simpson’s episode. So why is Lisa in court for causing devastation? Well, that’s what the whole episode is about. Flashback time!

Lisa begins telling her side of the story, and we jump back a couple weeks to when the family were driving to some fancy new mall in Springfield. They watch a McBain movie from some other family’s car, and then torment some random dude in the parking lot by pretending to leave their parking space just to get his hopes up. It’s very strange. Especially the fact that they all seem on board for driving his guy insane, even Lisa and Marge.

Anyway, they leave the parking lot and head into the new fancy outdoor mall, checking out the high-class stores inside. They also run into Lenny for a while, who is living in a condo inside the mall, and is meting out a sad existence hanging out with American Girl dolls and living on mall food. But there’s a purpose for the family being in this mall, because Marge apparently has a whole stack of gift cards, and wants everyone to spend them.

So they all take cards and split up, finding fun things to waste money on. Homer eats his weight in Cinnebuns, Bart gets a facial, and Lisa gets irritated that Blocko’s only come in sets and don’t have any creativity. After that montage though we see Lisa wandering around the mall on her own when she sees Sherri and Terri getting their hair done. Lisa tries to hang out with the twins, but they tell her that she’s too uncool to spend time with them.

Lisa is really distraught over this, and begins moping around the mall, continuing on when they head home. Lisa decides that she needs to find some way to connect with people, and hops on some instant messenger to talk to kids her age to find out what they think is cool. She basically just messages random words to see what they think of them, and starts getting a lot of data. Which is the perfect way to be cool.

She ends up deciding that the best way to be popular would be to create a new social networking service similar to the instant messenger, so that when all the kids start using it they’ll like her. Lisa then gets to work on SpringFace, her new social network platform with all the other Elementary School dorks. Nelson ends up coming in to mock them, and accidentally gives them their primary idea of accepting friend requests, which I figured was going to come back in some way, but didn’t.

Anyway, SpringFace is launched and it’s immediately a huge success. All the kids in town start using the service constantly, and Lisa instantly gets thousands of friends. However, something she didn’t anticipate begins to happen as well. Adults get into SpringFace, spreading it like wildfire. Now just about every single person in Springfield is using SpringFace, and they’re using it basically all the goddamn time.

Which starts to bother Lisa. She notices that everyone is spending their time socializing online instead of in real life. She did this whole thing because she wanted friends, and now no one is friends. And, to make it worse, SpringFace is rapidly becoming a bigger thing than Lisa ever anticipated, and it quickly gets too large for her to control. People start using it in ways that she never thought of, and she quickly loses control of it.

And when she loses control, chaos begins to spread. Because it eventually reaches that point that everyone is doing nothing with their lives but playing with SpringFace. Then one day Homer causes a car accident while playing with SpringFace, and it ends up causing a chain reaction of a city-wide car crash. Which is why Lisa is in court. This was the devastation that she caused, and the court wants her to destroy SpringFace. So, she does. Lisa leaves the court and takes SpringFace offline, freeing people from their digital prison. Everything goes back to normal at this point, and Lisa even gets to spend time with kids in real life.

But for some reason this is not the end of the episode. I guess it was really short of runtime, because they stick two weird little epilogues onto the episode. The first one is just Patty and Selma beating the Winklevoss Twins at rowing, and isn’t really anything special. The second epilogue is a very weird little short story about Bart pulling pranks his whole life, before TPing the Elementary school, before getting carried away by eagles. It’s weird, but it’s animated in a style of Edward Gorey, which makes it look nice at least. 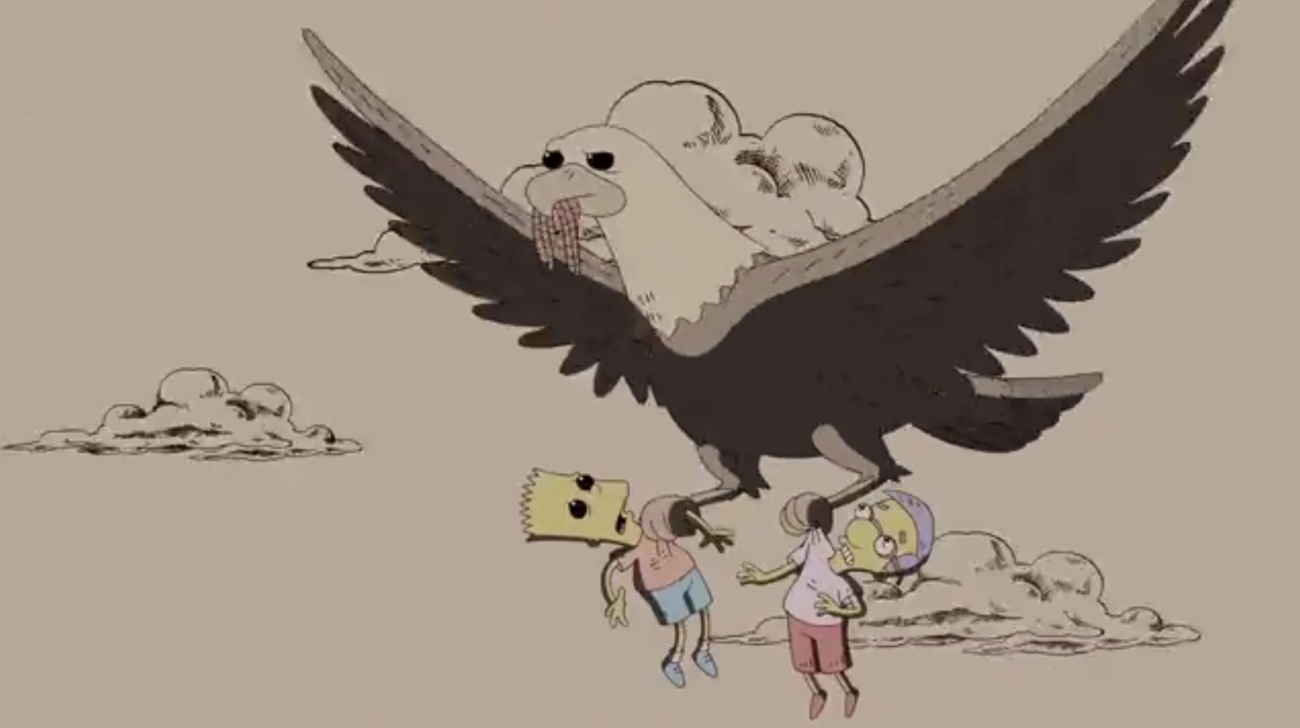 Yeah, this episode kind of sucks. It’s just so weird that they decided to do an episode-long Social Network joke after pointing out what a terrible idea that was. And, on top of that, the episode is a pretty lazy parody. Having it all be about Lisa causing a big traffic accident is so weird, especially considering that they set themselves up to parody the central conflict of that movie by having Nelson come up with part of the website, giving him the ability to fight with Lisa in court over who created SpringFace. But instead they just skip that whole idea and instead make the episode this weird indictment of social media that just by and large comes off as old people mad about the things the kids are into today. Having Lisa’s moral of the story basically be “stop looking at your goddamn phones and live your life” is a weird decision for this episode, in my opinion. But by the time that ending came about the episode was already at rock bottom, so whatever.

Take Away: Social media is the devil!

“The D’oh-cial Network” was written by J Stewart Burns and directed by Chris Clements, 2012.

Tagged as: 2012, Lifetime of Simpsons, Season 23, The D'oh-cial Network, the Simpsons