Merry Christmas everyone! That’s right, it’s time to check back in on the weird and wild world of Simpson’s Christmas episodes. And folks, things are going to get a little goofy today. Because today’s episode is going to smoosh two types of episodes together. A Christmas episode, and a flash-forward episode. Yep! Let’s see the Christmas of the future!

The episode starts off with the family sitting around the destruction of a devoured Thanksgiving dinner, groaning in pain and wishing they had made better choices. Until Marge comes strolling in with some bad news. Because now that Thanksgiving dinner is officially over, it’s time to start being obsessed with Christmas. Which means one thing. It’s time for them to get their Christmas cards in order. So, much to their chagrin, Marge makes the rest of the family put on some holiday outfits and sit on the couch, ready to take the photo for their card. Everyone hates it, but Marge insists that when they have kids of their own they’ll appreciate things like this.

And with that statement it’s time to start flashing forward. We see a montage of the Simpson’s various Christmas cards over the years, filling us in on what happened. We see the kids get older, Bart go off to college, promptly fail and come back so he can live with Home and Marge for years, Lisa goes through a goth phase, goes to college, experiments with her sexuality, ends up marrying Milhouse, and Maggie becomes an international music superstar.

So, with the exposition taken care of it’s time to jump on into the story. Which begins with Bart living as a divorced burnout in a terrible apartment complex made from the wreckage of the Springfield Elementary school. Bart is very depressed, and ready to just make it through the holidays when he gets a surprise visit. His two sons, Kirk and Picard, have been teleported into his apartment, having been pushed on Bart by their mother, who wants them out of the house for the holidays. So now Bart gets to spend Christmas with his two sons, who seem to despise him. Bart then decides it’s time to pawn them off on Homer and Marge, and heads off to have the boys spend the holidays with their grandparents too.

Meanwhile, we see that Marge is living with Milhouse and their sarcastic daughter Zia. They seem to be mostly happy, except for Zia who spends most of her time jacked into the future internet and not respecting her parents. They’re getting ready to have an average Christmas when Milhouse announces that he’s having some terrible allergy attack, and won’t be able to have any fun with them. So he suggests that Lisa and Zia go spend Christmas with Homer and Marge, which she thinks is a great idea, hoping that Marge can give her advice on how to fix Zia.

That just leaves Maggie, who is also having a weird time. She’s apparently become a musical superstar when she was 22, and lives in London. She’s apparently pregnant, with no one quite sure of who the father is, and is having a rough time with it. So bad that a doctor immediately tells us that she’s unable to speak for the rest of the her pregnancy, which means she needs to be with someone to take care of her. And, of course, that’s going to be her folks.
Homer and Marge then get word that their house is going to be quite full for Christmas, and they’re actually quite excited. Unfortunately, as everyone starts showing up, things prove to be a little rough. Bart is super depressed, and seemingly really bad at being a dad, especially when he learns that his ex-wife has gotten remarried. Lisa is also irritated with her daughter, and ends up taking it out on Marge, becoming super petty and childish to her. Oh, and Maggie can’t teleport when pregnant, so she has to take air-travel, which has devolved into some sort of Mad Max nonsense, which is going to take her a while to get to Springfield.

With his children acting like children, Homer decides to step up a bit and be a good grandpa. So he takes Kirk and Picard out to wander around Springfield, showing us that it has become a bit of a dystopia, what with robot-Snake robbing Apu and his massive family and old man Burns still sending out the skeletons of his hounds to attack people.

Oh, and Maggie has finally arrived in Springfield, and as she’s being taxied to the house by Kearney, she starts to go into labor. So Krusty has no choice but to take Maggie to the hospital, making it so she’s going to give birth before anyone even seems to know she’s in town. Luckily though she’s a celebrity, so when she gets there they manage to find her a special room, despite telling her that they’re full.

Meanwhile, Bart and Lisa are really distraught by their children, and decide to go hang out in the treehouse and get drunk on wine. They’re both feeling a little maudlin and end up thinking about the different paths their lives could have gone on. But, once they’re a little tipsy and emotional, Bart ends up tell Lisa that she’s the person that he always wanted to be. He tells her how amazing she is, and what a great mom she is, and Lisa realizes that it’s all thanks to Marge. So she drunkenly heads into Homer and Marge’s room during the night and tells Marge how amazing she is while Bart goes to spend time with his kids and be a better dad.

The next day someone finally thinks to call Marge and tell her that Maggie is in town and giving birth, so Marge heads off to the hospital to be with her. But just Marge apparently, because it’s time to see Bart and Lisa trying to be better parents. Lisa starts it off by deciding to snoop on Zia in the internet. She jacks in and hunts down Zia’s personal page, which is a bedroom full of science equipment and pictures of Lisa. Zia shows up and the two have a heart to heart, with Zia admitting that even though she’s a pain in the ass, she loves Lisa and thinks that she’s a great role model, which makes Lisa so happy.

Meanwhile, Bart wants to be a better father, but there’s just one thing standing in his way. He’s not sure where they are, since they’re still out with Homer. So Bart heads to Moe’s, figuring he’s there, and ends up talking with Lenny and Carl, who have switched brains at some time. They tell Bart that Homer took the boys to visit Abe. So Bart heads out to the cryogenic freezing facility where Grandpa is being held.

Homer thaws Grandpa out, and lets him talk to the boys for a bit, until Grandpa becomes an ass and just starts complaining, so Homer refreezes him. But while they’re standing there looking at Grandpa’s angry frozen body Bart shows up. Homer then teaches the boys that sometimes your dad can be a pain in the ass, but they always love you. This convinces the boys to cut Bart some slack, and they all return to the Simpson’s house, where Maggie has finally arrived with her new baby girl. The family is finally together, and they have highly evolved Santa’s Little Helper and Snowball II arrive and take their photo so they can always remember this weird weekend. I had a lot of fun with this episode. The flash forward episodes have been really hit or miss lately, but this one worked for me. It was a bit of a bummer to see how rough Bart and Lisa’s lives have become, but it’s nice to see that they end up happy. It’s realistic I suppose. I’ve never been the fan of Bart becoming a burnout when he’s older, and I kind of would have liked to see Lisa leading a more exciting life, but they seem happy by the end of the episode, so that’s all the matters. Maggie being a rockstart is pretty cool though. But where the episode really got me was seeing that the family aren’t going to change. Bart and Lisa’s heart to heart in the treehouse was really great, and seeing Bart finally admit that Lisa was his hero was really fantastic. I also love seeing that Marge and Homer are great grandparents. That seems right. There’s a whole lot of stupid jokes, but there was a lot of heart in this episode, which as lot of the flash-forward episodes miss, and I really appreciated that.

Take Away: No one thinks they’re good parents, but they’re all doing their best.

“Holidays of Future Passed” was written by J Stewart Burns and directed by Rob Oliver, 2011. 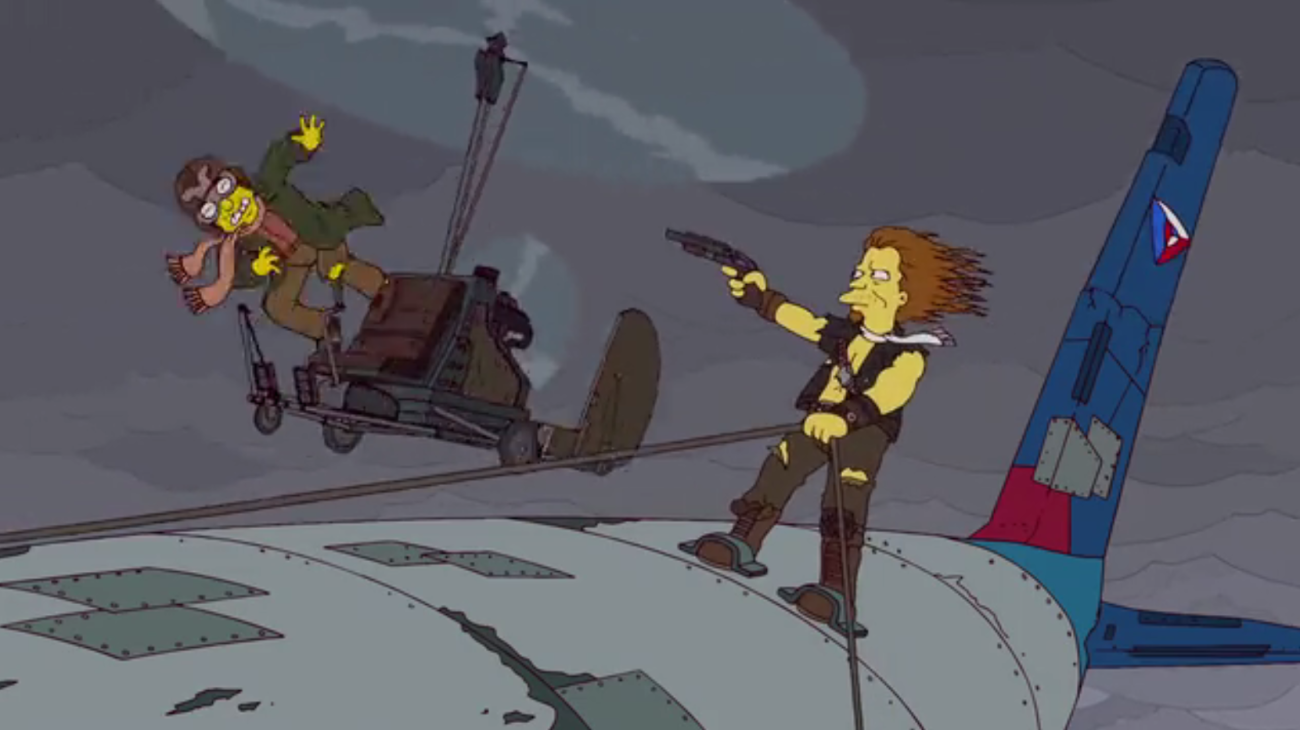 Tagged as: 2011, Holidays of Future Passed, Lifetime of Sipsons, Season 23, the Simpsons