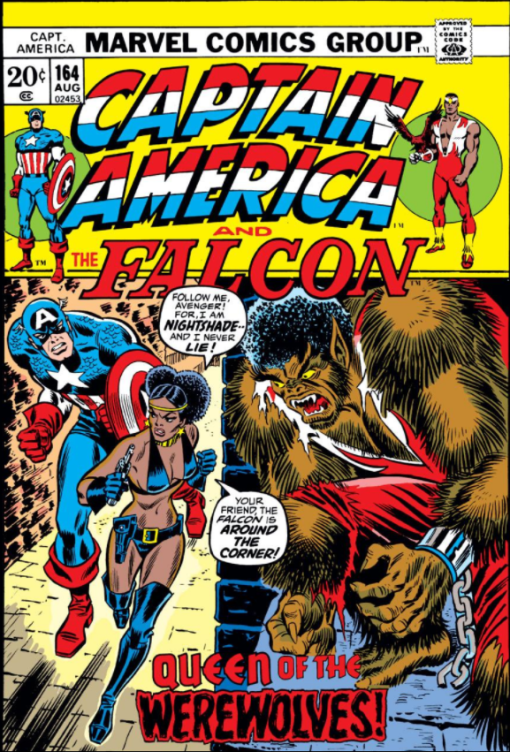 Happy Fourth of July everyone! The day Americans get liquored up, blow stuff up, and pretend that we’re still a world leader! And what better way to celebrate than to check in on the continuing adventures of Captain America? This is a fairly obvious decision, because let me tell you, there are a lot of Captain America stories that are both insane and feature weird reference to American history. Unfortunately most of these stories aren’t exactly self-contained, and had a lot of backstory involved, which I was unfamiliar with. So that’ll be for later, when I get closer to the issues in my Captain America read through. For now though, I’ve found something delightful. Not exactly the most patriotic story I’ve come across, but it’s a goddamn blast. I mean, we have Captain America fighting werewolves! And not even the story that most people would associate that with! Captain American famously turned into a werewolf in the hilariously weird story that’s known as “Capwolf,” but a) I haven’t gotten that far in my read through, and b) everyone has talked about Capwolf. So how about we flip the script, and talk about a time that the Falcon turned into a werewolf? Sounds fun!

The issue starts off with a delightfully insane splash page that shows Captain America being overwhelmed by a group of weird werewolves in what appears to be a castle. And folks, if there’s a better way to grab my interest right from the first page, I can’t think of it. Maybe if Doctor Doom was involved too. Anyway, we see Captain America struggling to get away from the werewolves while two shadowy figures watch. Cap gets in some good hits, but by the end things get too much for him, and Captain America dies on his feet. Wait, what? Yeah, Captain America has been killed by werewolves and he get gloated over by one of the figures on the stairs, a woman in what basically is just a bikini, thigh-high boots, and a revolver. She refers to herself as Nightshade, and lets her pet werewolves know that this was perfect practice. Yeah, shockingly, that man in the Captain America costume who was just beaten to death by werewolves was just some random dude wearing a costume. Good team building I guess. 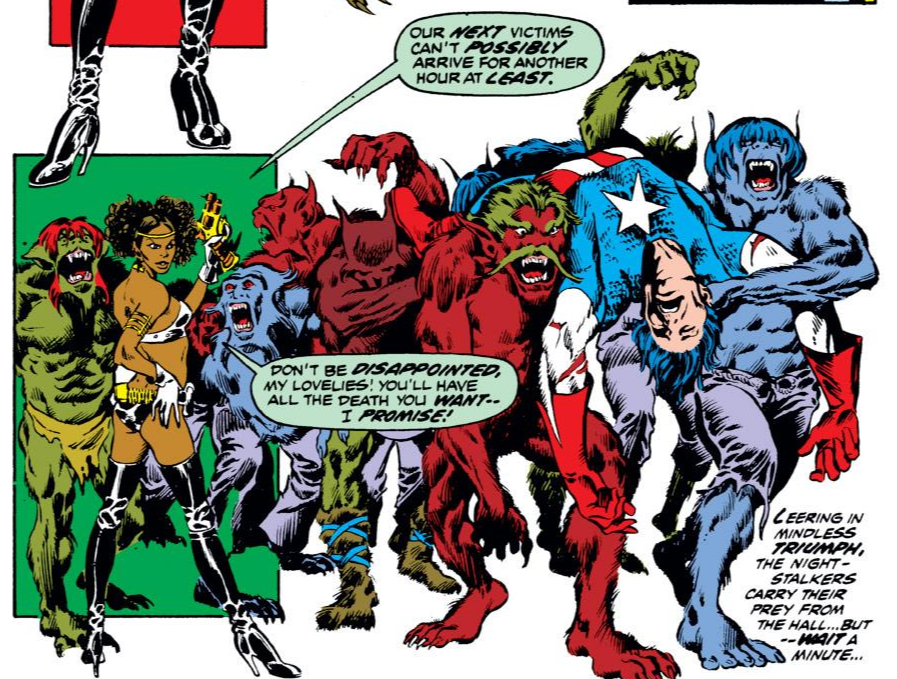 So what is the real Captain America doing while his double is being carried off to be eaten by werewolves? Why, he an the Falcon are driving around the woods on motorcycles laughing and talking about girls! They’re hanging out in the backwoods of Maryland after dealing with a whole mess of drama dealing with the Carter family. Which tends to happen when you date two sisters with a drastic age difference that you dated before and after you were encased in ice. It happens all the time. Oh Marvel Comics, always finding fascinating ways to inject insane relationship drama into a story about werewolves.

Anyway, there actually is a goal to their motorcycle ride, they aren’t just bonding. Turns out that a friend of Falcon’s that he’s known since childhood, Mel, has sent him a letter asking for help. Mel apparently has been in prison for years, after engaging in a life of thievery and crime, which Sam feels responsible for, since he egged Mel into committing his first theft when they were kids. Mel has been in a horrible prison in Maryland called Grimrock Prison that basically looks like a castle, and weird things are afoot. He told Sam that there are weird experiments going on, and prisoners are vanishing, and he needs Falcon’s help. So now Cap and Falcon have arrived at the bizarre Grimrock Prison, and they’re preparing to burst in and help Mel. The two get into the prison rather easily, since they appear to not have guards. The two split up, because that’s always a great plan, and Cap begin wandering around the prison on his own, looking for clues to what’s going on. And he does stumble upon some clues, just not what he expected. He finds that ripped up mask from the other Captain America in the beginning of the story. And as he’s standing there, pondering why there’s a bloody Captain America mask in this creepy prison, he begins to hear some rustling behind him. Whatever could that be? 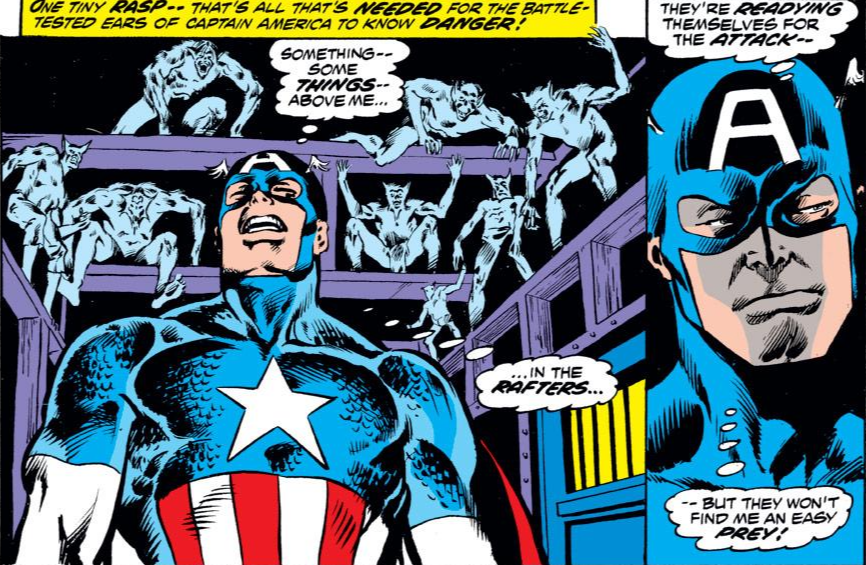 So Cap is ready to be jumped by some criminals. What he isn’t expecting is a whole bunch of werewolves to leap from the rafters. Not many people can be trained for that experience I suppose. Anyway, Cap begins fighting off the werewolves, while being rather shocked that he’s fighting werewolves. Oh, and he calls the werewolves “gentlemen” which delights me to no end. Cap and the wolfmen begin fighting as violently as possible, knocking them out until the whole group flee off into the castle, since Cap is just too good a fighter for these goddamn wolfpeople.

However, as Cap is standing there, victorious, he hears a voice congratulating him from behind. Cap spins around and finds the woman in the battle-bikini from earlier. She introduces herself as Deadly Nightshade, Queen of the Werewolves. Which is a hell of a name. Good job Steve Englehart. Anyway, Nightshade begins taunting Captain America, telling him that here pet werewolves have already killed one Captain America that evening, and they plan on killing another. She informs Cap that she allowed Mel’s letter to be smuggled out of the prison, knowing it would bring Cap and Falcon here. Because how else will she prove the superiority of her werewolves than by having them kill Captain America. And she has a pretty good idea on how to get Cap attacked. She has the Falcon captive, and will only free him if Cap agrees to be attacked by werewolves. Cap is pretty wary of this statement, until she produces on of Falcon’s pet Redwing’s feathers. This cinches it, and Cap follows Nightshade to a cell, where Falcon is indeed chained up. 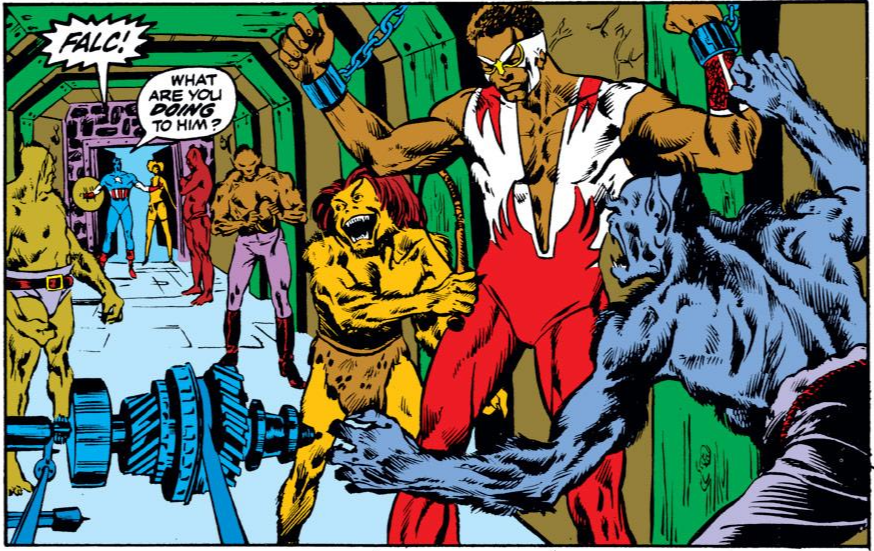 Cap is obviously terrified for Falcon, and runs up to him to comfort him, scaring off the weird little werewolf helpers. And things don’t look good. Falcon is clearly in a lot of pain, and he’s able to explain that they’ve given him some sort of serum. Cap tries to free Falcon, but gets distracted when Nightshade and her werewolves leave the room and they lock the door while cackling. Red flag. And what does that serum he was given do? What do you think? It turns Falcon into a goddamn werewolf! And not one of the little scraggly dudes that you’ve seen in the screenshots so far from this issue, he gets turned into a massive werewolf who has no idea who Cap is, other than food.

Falcon-Wolf is able to rip himself out of the chains that were holding him to the wall ,and he begins attacking Cap. Which isn’t going to be easy, since Captain America is the best. He’s able to bob and weave, staying away from Falcon’s massive frame. Cap does his best to defeat Falcon without hurting him, using judo to throw him around the room without hitting him too hard. Which doesn’t work great. Falcon seems almost impossible to defeat, and he’s just wearing down Cap, making him get sloppy. Which sure as hell is confusing Nightshade. However, disaster begins to strike, and Falcon starts to get the upper hand on Cap. So Cap has no choice but to take his best friend down. 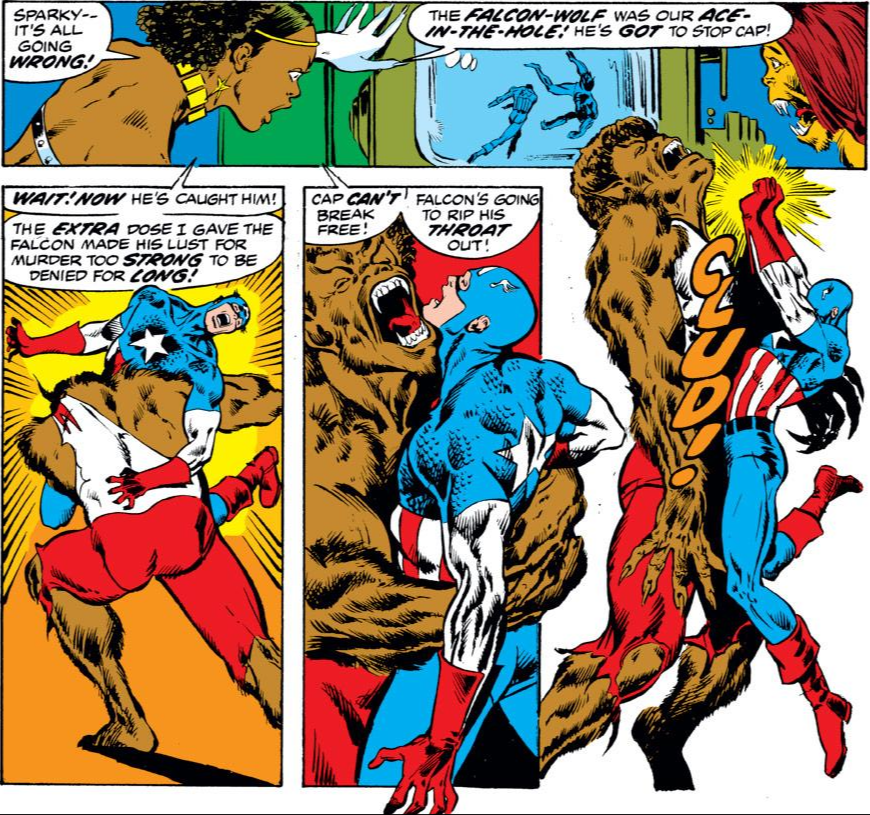 After smashing Falcon in the face Cap is given just a moment of respite, and he’s does his best to escape. Which doesn’t go well. The door is still very much chained, and Cap is unable to get out of the room. So he just stands in front of it and lets Falcon charge through the door like a cartoon bull. And this does not go unnoticed by Deadly Nightshade, who is beginning to panic. Mainly because her secret partner is very displeased. It turns out to be a man called Yellow Claw, a Fu Man Chu ripoff who used to fight Cap in the 50’s when Marvel was still Atlas. He’s apparently been bankrolling these werewolf experiments, and he’s not excited with what he’s seen. He has no interest in investing in Deadly Nightshade’s weird werewolf experiments, and leaves her.

And, if Deadly Nightshade’s day wasn’t going poorly enough, things get worse. Because the prison is being raided by Nick Fury and some SHIELD agents, who were tracking down Yellow Claw. Oh, and Nick Fury is wearing some sort of furry vest as if he’d just arrived from fighting with Conan. Not really sure why. This freaks out Nightshade, and she decides that her whole experiment is ruined. So she has no choice but to run to the cliffs outside the prison and leap to her death. And, because the werewolves apparently have some sort of psychic connection with Nightshade, they all begin following her, prepared to jump to their deaths as well. Which includes Falcon. Cap notices something is wrong when Falcon begins wandering off from their fight, and chases after him, trying to keep him safe. Which is a bit difficult when the person he’s trying to keep safe is a massive werewolf intent on killing himself. But Captain America is the goddamn best, so he’s able to put Falcon in some crazy leg-hold, and is able to keep him safe long enough for the serum to wear off. Falcon then reverts to his normal self, having no memory of what has transpired. But it’s no big deal, because Cap, Falcon, and furry Nick Fury have bigger fish to fry. The Yellow Claw is loose! 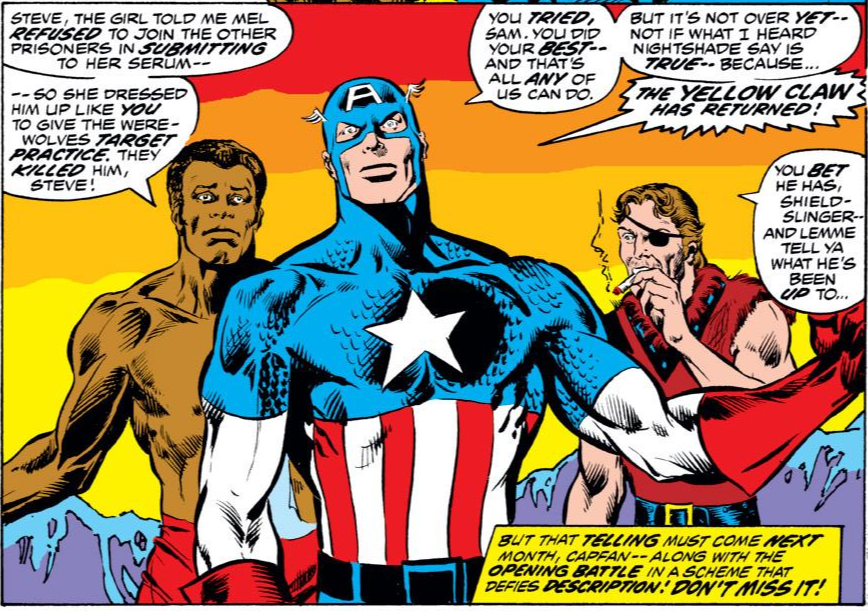 So there you have it. A completely insane little one-shot story. I mean, we just got to see Captain America get conned into going to a crazy prison/castle that was full of crazy grindhouse werewolves lead by a woman in what appeared to be a leather bikini. Shit’s nuts. I just love how absolutely weird and insane Marvel comics from the seventies were.  I also find it completely insane that this is the first appearance of the character Deadly Nightshade, and it also seemed to feature her death. In case you weren’t aware, this character has recently been reformed, and has been acting as a supporting character in several current series’, all written by David F Walker. She’s going by her real name, Tilda Johnson now, but it’s technically the same character who once tried to kill Captain America with werewolves. Yeah, it wasn’t exactly the most patriotic story to discuss on Independence Day, but it’s the best I got. Any comic featuring Captain America is going to be patriotic, even if it’s mostly about him beating the hell out of some bargain basement werewolves in the hopes of defeating a horrible Asian stereotype. So enjoy your Fourth of July with some insane Captain America stories. And I’ll find something a little more appropriate next time.

Captain America #164 “Queen of the Werewolves” was written by Steve Englehart, penciled by Alan Lee Weiss, lettered by John Costanza, and colored by Jim Starlin, 1973. 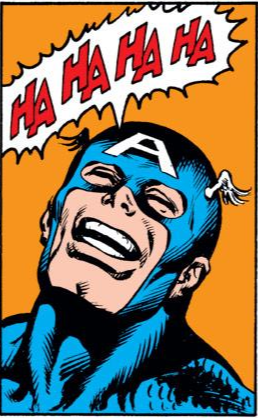