Goldfinger and the Ideal Bond Movie

When a series has been around for as long as James Bond has, there’s almost certainly going to be quite a bit of influence on popular culture. There are certain big franchises that I have actually barely experienced myself, but know quite a bit about because of what’s bled over into the culture at large.  Star Trek for instance is something that I actually haven’t experienced much of, but due to it’s prevalence in culture know enough about. And James Bond is no different. Even if someone hasn’t seen a James Bond movie, they know the tropes and the references well enough. They know what goes into a Bond movie, so that if they’re watching something else that’s referencing Bond, it’s pretty easy to get it. And I think it’s debatable that the film that has caused the most cultural penetration is today’s outing, Goldfinger. One of the most well-known Bond films of them all, Goldfinger is often considered the best of the series, typically by people who don’t actually have that much experience with the franchise. It’s a pretty common first Bond movie for people, a Gateway Bond Flick if you will. And while I don’t consider it one of my favorites, it certainly has a number of iconic and terrific aspects. If a cartoon is going to reference James Bond, it’s probably going to be something from this movie. So while it may not always be my particular cup of tea, there’s something to say about the status it holds in our culture.

Goldfinger, much like a majority of these early Bonds, is based on a novel by Ian Fleming, and he actually passed away during the production of the film. The novel isn’t one of the stronger ones, although this film is a fairly faithful adaptation of it. The basics are all there at least, and you can tell that the weird decisions that Fleming made with that novel were good ones, because the unique and bizarre characters and scenarios that he crafted have held so much weight over the years. This was a massive film, with a budget that was more than the previous two films combines, and it was the movie that really put the Bond franchise on the map. It was a blockbuster, and seemed to instantly give the world Bond-fever, which carried over into the next film, Thunderball, which we’ll get to tomorrow. But for quite a while this film was considered one of the high-water marks of the series, the epitome of the franchise’s style and impact. 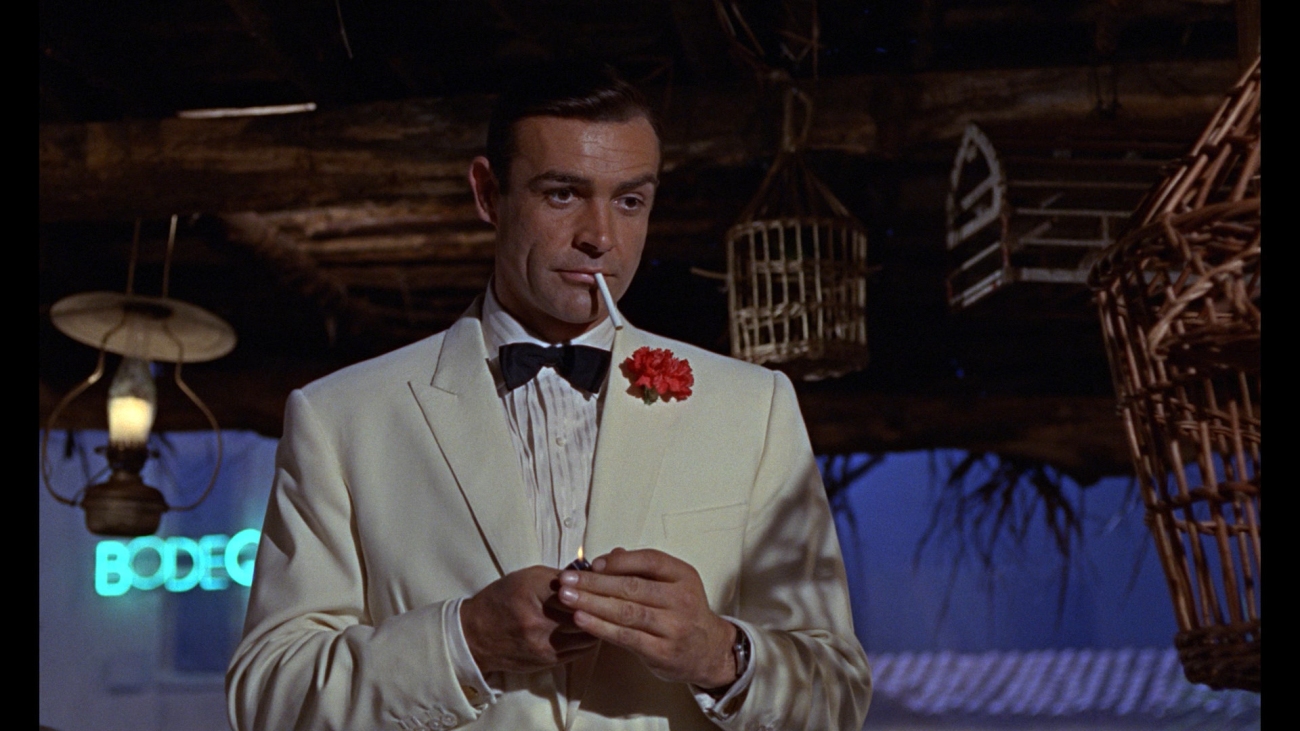 The film starts off with a tense little cold-open where Bond is in a non-disclosed Latin American country, destroying a supply of drugs. This leads to him wearing the iconic white suit jacket, and leads us right into one of the most well-known theme songs sung by the incomparable Shirley Bassey. Once that’s over with though we head right into the main plot, with Bond relaxing in Miami beach. He’s lounging around, presumably after the cold-open’s mission, when he gets visited by his good friend Felix Leiter. Leiter has been sent to find Bond, and give him his orders from M. Turns out there’s a man in the same resort, named Auric Goldfinger, that Bond is tasked with keeping an eye on. So Bond starts spying on Goldfinger, and quickly establishes that he’s there to cheat people out of money while playing Gin Rummy. So Bond sneaks up to Goldfinger’s room and finds his accomplish, Jill Masterson. Bond humiliates Goldfinger and spends the night with Masterson, only to be assaulted by Goldfinger’s butler when he goes for more champagne. And when Bond awakes he finds Masterson dead, covered in gold paint. So Bond returns to England to get more information on Goldfinger. Apparently Goldfinger is believed to be smuggling gold around the world, and the British government wants to put a stop to it. So they send Bond to play golf with Goldfinger, and gain his trust in the hopes that he gains some insight into Goldfinger’s operation. This doesn’t go so well, since Bond ends up upstaging Goldfinger and humiliating him once again, and in front of his butler Oddjob no less. So, with no other alternatives, Bond decides to plant a tracking device on Goldfinger’s car, and follow him out of England in into Switzerland.

Bond stalks Goldfinger through the Alps, while also being followed by a mysterious woman, until he finally comes across Goldfinger’s Swiss base of operations. But while he’s staking out the building he runs into that mysterious woman, and learns that she’s Tilly Masterson, Jill’s sister. The two are then caught by Goldfinger’s guards, and Tilly is killed by Oddjob’s metal hat. Bond is captured alive however, and brought into Goldfinger’s base so that he can be strapped to a table and be tormented with a laser. What follows is an amazing scene where Bond survives on his wits, convincing Goldfinger that he knows more about the whole scheme than he really does. And it works, so Goldfinger brings Bond along with him to Kentucky, where Bond meets Goldfinger’s personal pilot, Pussy Galore. And once in Kentucky we finally see what Goldfinger’s plan really is. He’s been working with the Red Chinese government to create economic chaos in the West, and he’s going to do that by breaking into Fort Knox and irradiating the gold supply of the United States with a nuclear device. Once that’s accomplished his own gold will become vastly more desirable, and he’ll become rich. And there doesn’t seem to be anything Bond can do about it, until he manages to seduce Pussy Galore into helping him out. We then move on to Goldfinger’s plan, which begins with Pussy Galore’s student pilots flying over Fort Knox and dousing the place in a nerve gas, seemingly killing all the soldiers. Goldfinger’s forces then storm the base, and deliver the device, and Bond, into the gold depository. However, it turns out that Pussy has changed sides, and warned the US government about the attack, and also put fake nerve gas in the planes. So the military is just playing along, and they swoop in to stop Goldfinger. Bond is unfortunately trapped inside the vault with the device and Oddjob, but after a brutal fight between the two Bond is able to kill the henchman, and help arrives just in time to deactivate the bomb. Bond then gets to fly to Washington DC to visit the President, when he’s attacked by Goldfinger once more. The two grapple on the plane, and Goldfinger ends up accidentally shooting the fuselage of the plane, causing explosive decompression that sucks Goldfinger out to his death. Bond and Pussy then escape the plane, and land safely on the ground, having saved the day.

Over time my opinions on this film have vacillated pretty wildly. When I was a kid and my dad showed it to me for the first time I thought it was ridiculous and a little boring. Then I got older and more into Bond, and bought into the hype that it was the greatest of them all. After that I had a bit of a backlash where I found it terribly overrated and full of flaws. Now I’m somewhere in the middle. There’s certainly some issues with this movie, and it hasn’t aged as well as others, but I think there’s still a lot of like about it. The golf scene is still pretty interminable, I still have no idea why Goldfinger explains his plan to the mobsters only to immediately kill them all, and the idea of Bond forcing himself on Pussy Galore, a character who in the book was a lesbian, and thus change her allegiance is pretty horrible. But despite all of that, there’s some moments of brilliance in the film. The cold-open is a classic, the song is tremendous, and there are little bits that still work perfectly. I like Goldfinger as a villain quite a bit, and I still think that there hasn’t been a more tense and effective scene than the one with the laser. I could talk endlessly about how much I love the laser scene, and how great it is to see Bond completely cornered and only surviving by his wits and his ability to lie. Oddjob is one of the most iconic and fun henchmen in the series, and I still get quite a kick out of him throughout the film. I’m also a big fan of the fact that they didn’t adapt the book’s evil scheme, which was actually to have Goldfinger and a bunch of gangsters steal all of the gold from Fort Knox, which is even mocked in this film for being utterly ridiculous. The actual plot that Goldfinger has isn’t exactly realistic, especially when coming straight from From Russia With Love, but there is a certain amount of sense to be had with it. There are problems with Goldfinger, but I still think there’s more good about it than bad.

However, I do believe that the most important aspect of Goldfinger is still the indelible mark that it’s laid on our culture. When a person thinks of a Bond film, even if they haven’t seen one, they’re probably going to think about Goldfinger. Dr. No created the basic formula that the Bond films would come to use, From Russia With Love largely bucked it and did it’s own thing, and Goldfinger took that formula and ran with it. Almost everything about this film is utterly iconic. The suit, the song, the villain, the henchman with the weird talent, the Aston Martin with the gadgets, the Bond girl with the ridiculous name, a plan involving a nuclear weapon, everything that will eventually be known as a Bond movie came from this. Dr. No had a good formula, and Goldfinger perfected it. For better or for worse, Goldfinger is the film that most other Bond movies aspire to be. Some come closer to others, but by and large all future Bond movies will try to re-capture the structural magic that this film had. But it even goes beyond the franchise itself. This is the film that has had the largest impact on pop culture. It was a massive hit, created a profitable merchandise line, and completely dominated pop culture. There was even a cover story about the film in Life Magazine. This was the film that took the Bond franchise from a fun couple of action movies to a cultural landmark. This was the film that made everyone know who James Bond is. I maybe would prefer a more consistently good film had that honor, but there’s no getting around the impact that Goldfinger had on the franchise and pop culture as a whole. Every Bond movie that comes after this owes quite a bit to Goldfinger. For better and for worse.

Goldfinger was written by Richard Maibaum and Paul Dehn, directed by Guy Hamilton, and released by United Artists, 1964.