Hello everyone, and welcome back to another installment of Bat Signal, my ongoing quest to read every issue of Detective Comics in random order and with very little context. And let me tell you, today’s story is a whole lot more interesting than that cover would lead you to believe. We’ve certainly learned by now that covers from the Golden Age often don’t do a very good job at showing you what’s going to be in the issue, which is usually a disappointment. But today’s story benefits greatly from this phenomenon, because this may be the dullest cover to an issue of Detective Comics that I’ve ever seen. Although I do like the hubris in the statement “still your favorite comics magazine!” But don’t worry about any of that, because we get to see Batman bust some ghosts in this comic, so all is well in the universe.

The issue starts off in the home of Gotham City district attorney Robert Pierce, who is going over a brief when something startling happens. He ends up running out of his apartment and loudly tells the people outside that he’s just seen the ghost of a man recently executed named Rifle Rafferty. And he’s not the only one, because we then see a Judge Whipple being visited by the specter of Rifle Rafferty, who threatens to haunt the judge for executing an innocent man. This obviously terrifies both men, and the race to police headquarters to get Commissioner Gordon to help. He sets off the Bat Signal, summoning the Dynamic Duo. And they’re immediately condescending. Batman explains to this group of adults that ghosts aren’t real, and does little to dissuade them. And it doesn’t help that the story got out and the newspapers heard, whipping Gotham into a frenzy. But Bruce is confident that ghosts aren’t real, and goes about his life. Until he and Dick go see a performance of Macbeth, where the audience gets a surprise visitor.

Yep, the ghost has shown up at this performance. And he’s much more talkative this time, loudly announcing to the crowd that a gang is robbing a nearby bank. Bruce finds this a little odd, and he and Dick sneak out to investigate as Batman and Robin. And, sure enough, there are people robbing the bank, and they’re able to stop them. Batman’s not quite sure what to make of this, but chock it up to a coincidence. However, that gets harder when the ghost continues to appear around Gotham, telling people about impending crimes. But, throughout it all Batman remains confident that it’s a scam, and tells people that until the ghost makes it into the Batcave, whose location no one knows, he won’t be convinced.

But Batman does keep taking advantage of the ghost’s inside knowledge of the criminal underbelly of Gotham. So when the ghost says that some criminals are stealing a precious artifact from a local amusement park, Batman and Robin go check it out. And, sure enough, some criminals are getting ready to steal some random tapestry. Batman scares them off, and when they get back to the Batcave they hang the tapestry up and find a message written in invisible ink on the tapestry telling them the location of a payroll robbery. So Batman and Robin return the stolen money to Commissioner Gordon, and find that they have a surprise visitor.

So renowned ghost-hunter Dr. Paul Visio is now on the case with the Dynamic Duo, and he’s eager to help them expose this Rifle Rafferty as a fraud. And their first step is to hold a massive lecture at the Gotham City Civic Auditorium where Dr. Visio shows off a slideshow of ghosts he proved false. However, that’s ruined when the ghost of Rifle Rafferty arrives and terrifies the audience. Visio freaks out, and drops his water all over Batman, getting ready to flee from the auditorium. Batman and Robin then return to the Batcave, ready to figure out what’s going on.

And when they get to the Batcave something shocking happens. The ghost arrives near that tapestry, and tells them that in two day’s time he’s going to kill the two of them with his ghostly rifle. The ghost then vanishes, and the Dynamic Duo have two days to figure out what’s going on. And, two days later, they arrive at Commissioner Gordon’s office to meet with Gordon and Visio, who is planning on leaving Gotham in terror. And as they’re talking to the doctor the ghost of Rifle Rafferty arrives, and shoots Batman and Robin, seemingly killing them. Which is when the ghosts of Batman and Robin arrive, and terrify Visio. They tell Gordon to arrest Visio, as the real Batman and Robin get back up and attack some hidden goons who shot at them. We’re then treated to multiple pages explaining what the hell was going on. Apparently Visio wanted to become a crime boss, and created all of this ghost nonsense. He planted moles in other gangs so that the ghost could get them busted, leaving him in power. He then created some elaborate ghost con, by using invisible ink and his ventriloquist skills. The “water” he spilled on Batman was what caused the ghost on the tapestry to appear, and Visio’s goons loaded some sort of radio system into the Batcave to make it talk. Batman and Robin figured all of this out, and came prepared with bullet-proof vests and their own ventriloquist skills to pull the rug out from under Visio and get him caught. Which is all incredibly elaborate, but whatever, we needed an ending.

I had a lot of fun with this issue, even though it does feature a lot of aspects of Detective Comics that I can’t stand. I’m find with having a one-off villain who is sort of bland besides the ghostly gimmick, even though we didn’t get to run around in the woods. But what I’m not a fan of is the fact that there was three goddamn pages of exposition at the end to explain what was going on. Detective Comics stories that revolve around intimate knowledge of Gotham City that we can’t possibly have known about or that have so many moving pieces that were presented in the actual issue just kind of bother me, because it’s impossible for the reader to have figured out what was going on. There’s just no clues for us, only things that Batman tells us later. Which I don’t like. But, I can’t be mad about an issue where Batman fights ghosts. Even if it’s fake ghosts, until that other issue I discussed months ago which may have actually had ghosts in it.

“The Ghost of Gotham City!” was written by someone, probably Bill Finger, penciled by Dick Sprang, and inked by Charles Paris, 1949. 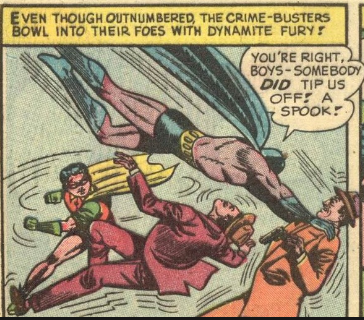