Well, after yesterday’s unpleasantness I feel like just about anything would seem like an improvement. I can’t quite tell if this is a good episode, of if I just enjoyed it more because it wasn’t “Mona Leavesa.” Either way, it’s better than yesterday, and also gives us the end of Season 19. That’s right folks, tomorrow we’re entering into the TWENTIETH year of this show. Ay Carumba.

Things start off at some sort of ritzy show business awards show that’s being held in Springfield. We see all sorts of stars walking the red carpet, like Ranier Wolfcaste, Gabbo, and Boobarella. Surely the skies were dark because all of the stars were in this building. And once we get into the building we see that they’re about to give their biggest award, when things start to get odd. Time freezes and we begin hearing some narration from Sideshow Mel.

Mel is telling us about how tense things are in the room, mainly because of who the winner of the award is. Lisa Simpson. This certainly seems strange, so Mel fills us in on the story, and we flash back to a couple of weeks ago, on the eve of Krusty’s 4,000th episode. It’s a huge deal, and people are packed into his studio to see the retrospective that’s being hosted by Drew Carey. It doesn’t seem like Krusty is actually doing any performances, and instead is just showing clips from his illustrious career.
And among the clips is some footage of the Kruskateers, some Mouskateer rip-offs who sit around with Krusty and sing. We’re then treated to see the surviving and non-famous members of the Kruskateers show up in their sad, middle-aged forms. They’re all very sad and pathetic, and to save the special from becoming too depressing Krusty announces that they’re going to have new Kruskateers, and they’re going to start auditioning local kids to join the cast. 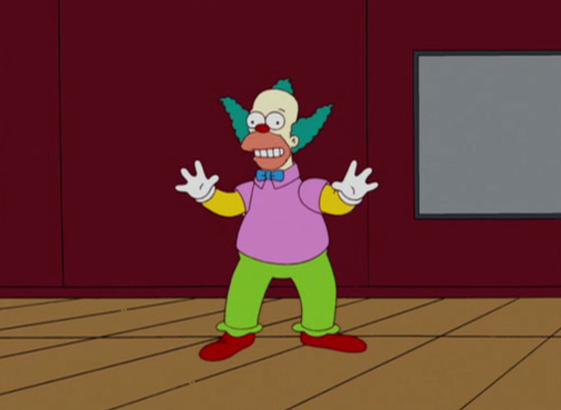 So obviously Bart is super down for this. We then cut to several kids trying to audition for Krusty, and it’s pretty sad. No one is particularly great, except Bart I guess who does some standup that the people in the audience seem to like. But Krusty isn’t really impressed by anyone, and yet he has to pick someone, so he decides to go with Nelson, primarily because Mrs. Muntz seems to have slept with him. So yay for Nelson, but Bart is pretty crushed.

However, the person who is most irritated about Krusty’s decision is Lisa, who really thinks that Bart got screwed over. So to appease her brother’s crushed ego Lisa decides to approach Krusty and tries to convince him to hire Bart too. She tries to explain to Krusty that if Bart was his intern Krusty wouldn’t even have to pay him. And this really inspires Krusty! To hire Lisa as his unpaid intern, and to continue not employing Bart.

So Lisa has a job now, and we begin seeing her struggle to understand the complicated world of show business while we get more narration from Sideshow Mel. Most of Lisa’s job is getting barked at by Krusty, and she starts to get worried when Krusty randomly fires Nelson for new reason. But she gets some career advice from Sideshow Mel, who teaches Lisa how to handle Krusty, which mainly involves agreeing to everything he says, always carrying spare cigars, and being quick on her feet for his absurd demands.

Meanwhile, Bart is pretty crushed about Lisa getting a job with Krusty, which is something he desperately wants. Homer notices that Bart is so depressed, and offers to help him. And Homer’s first bit of advice is to get rid of all of the Krusty memorabilia in Bart’s room. So they pack up all of the Krusty garbage and head over to the Android’s Dungeon to try and sell it. Comic Book Guy is obviously being a dick, and doesn’t give them any money. But he does give them a coin collecting book, giving the two a new hobby.

However, Bart really doesn’t find coin-collecting that interesting, and quickly grows bored with it. Homer doesn’t want Bart to fall back into depression though, so he convinces Bart to head out into Springfield with him to fill up the book. The two then scour the town, finding all of the coins that the book requires. It seems pretty easy, and they manage to fill the book rather fast. Well, except for the rarest coin of them all, a misprinted penny with two Abraham Lincoln’s that appear to be kissing. The quest is on.

Things are going well for Lisa too, because she’s really getting a hang of the job as Krusty’s assistant. She keeps his dressing room spotless, helps him with his jokes, and just generally becomes a necessary part of his life. She’s even able to save one of Krusty’s failing bits when Mr. Teeny isn’t around to play a part. Lisa puts on Teeny’s costume and is able to jump onto the stage, finishing the bit. And people love her. And, she in turn, loves the adulation from the crowd.

But Krusty’s a little worried about Lisa’s sudden success, especially when his agent warns him that Lisa could be angling to replace him. And it turns out that this was a good call, because while Homer is talking to his agent Lisa is meeting with the network, trying to convince them that she’s a great clown and deserves her own show. When Krusty learns about this he races to the studio, just in time to see the network executives offer Lisa the show, firing him.

Oh hey, Bart and Homer are still hunting down that penny. Their first idea is to just horde pennies in the hope that they come across the rarest coin in the world, before realizing that the only way to find it is to go to an auction. So they head to a coin auction that’s selling the penny, and offer a paltry sum. Their bid is rejected though when Mr. Burns buys it for an exorbitant amount of money. Homer and Bart get the last laugh though, when Homer cons Burns into giving him the rare penny while asking for change for a nickel. And thus with their quest complete Homer and Bart finish the coin book and put it on a shelf to forget about it forever.

Meanwhile, Lisa’s show has become a big deal, with everyone in town being obsessed with it. Sideshow Mel continues to work with Lisa, and give us narration, and we see Krusty having to host some terrible talk show at 3 am. And it all leads to Lisa getting nominated for a performer of the year award, bringing us up to the beginning of the episode. Lisa graciously accepts the award, and is quickly brought aside by Sideshow Mel, who has a tale to tell her.

He brings Lisa to a room with portraits of previous winners of this award, and shows her that they all failed to accomplish anything else in their life. Including himself, since he won the award back when he was a serious actor. Lisa realizes that there’s more to life that seeking applause, and that this career won’t be fulfilling to her, so she decides to give Krusty back his show, and even convinces the local press that he’s still funny. 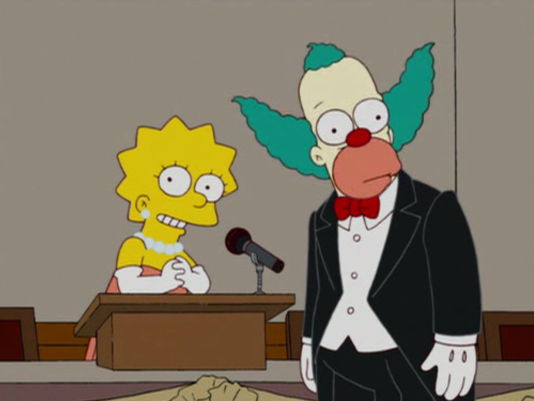 Yeah, I don’t know, I guess this episode is alright. I think the All About Eve is an interesting movie for the Simpsons to do a vague parody of, and I suppose the idea of Lisa becoming addicted to applause, only to screw over Krusty is a good idea. It’s a little similar to “Bart Gets Famous,” but things get a lot darker in this one. Instead of just learning that show business is fickle, Lisa learns that it’s soulless and gets you addicted to adulation instead of creativity. That’s a pretty solid lesson for her to learn, but there’s just something about this episode that just comes off as kind of bland to me. That coin-collection side-plot sure wasn’t helping things. I’m really at a loss to explain what exactly it is about this episode that makes no impression about me. I love Lisa and I love Krusty stories, so I should be really into this episode, but I just am kind of left cold on it. It’s fine I guess, there’s just nothing to it. But after yesterday’s episode I guess “Okay” is a serious improvement. And thus Season 19 ends, with a weird whimper. Fingers crossed that Season 20 will be fun!

Take Away: Don’t base your self-worth on the praise of others, because that’s not a fulfilling model of life.

“All About Lisa” John Frink and directed by Steven Dean Moore, 2008. 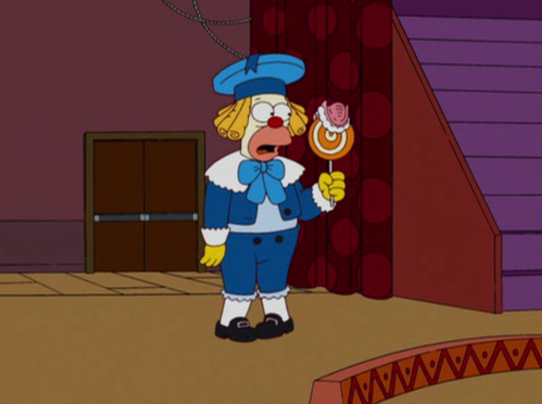 Tagged as: 2008, All About Lisa, Lifetime of Simpsons, Season 19, the Simpsons