Well it’s certainly been an odd week here on Lifetime of Simpsons. There were some highs, and some lows, but by and large it was just kind of a fine week. Which is actually pretty great from this era. And what better way is there to end the week then by having an episode that’s just some nice fluff. Nothing too objectionable or great about it, just kind of pleasant and insubstantial. Here we go.

The episode starts off with the Simpsons driving to a football game that no one is interested in. And they’re especially not interested because they’re going hours before the stupid game even begins. That’s right; they’re there for bizarre ritual of tailgating. It doesn’t even appear that they family plan on going to the game, they’re just there to wander around a parking lot on a drizzly morning eating meat with random weirdoes.

But if that was their goal, they succeed handily. The family just walk around, sneaking up to townsfolk that they don’t know that well and mooch off of them like crazy. They also have to avoid the people who are actually interested in the game, to the point that the two rival colleges are about to get into a rumble because of their disputes. Just a fun day, standing around stealing food from strangers and trying to avoid being beat up.

There is one bright side though, because it turns out Lisa had some assignment for her art class to make a little documentary. And she decides that the carnage and ugliness of this parking lot would make a perfect setting, so she gets out her little camera and starts filming. And she was correct, there’s a lot of great stuff to capture at this tailgate. She films fights, people gorging themselves on food and alcohol, and basically just encapsulates the American Dream. She also realizes that she loves this.

Unfortunately her art teacher decides that it wasn’t up to snuff, and gives her three out of five stars. This obviously flies Lisa into a rage, and she storms to Principal Skinner to complain. And, surprisingly, Skinner agrees that this isn’t fair. He really loves Lisa’s documentary, and ends up revealing that he’s a huge movie fan. He even writes terrible, terrible sounding screenplays. But Skinner likes the documentary so much that he decides to foster Lisa’s talents, and give her access to the audio/visual club in order to make a new documentary.

Lisa is interested in this prospect, and her and Skinner begin brainstorming ideas. Skinner explains that Lisa’s family is full of drama, and that filming them will be a surefire way to make an engaging story. So Lisa comes home and tells the family that she’s going to begin filming their every move, and for them to act naturally. Which of course results in them sitting around the table, acting like nutjobs because they’re terrified of what they’re going to look like on film.

But Lisa finally starts to get some interesting footage, and Skinner is loving it. And you know who else is loving it? Superintendent Chalmers. He actually really enjoys the idea of Lisa becoming a filmmaker, mainly so he can show up some snotty arts school in town that he hates. And Chalmers has an idea to really stick it to the snobs. They’re going to enter the resulting documentary Lisa makes to the Sundance Film Festival.

No one decides that this is an insane idea, so the whole school starts to work together to make Lisa’s documentary the best it can possibly be. They have Mr. Largo create a score of the movie and even have the bullies create a foley department. And after a lot of work they have something that they think is good and send it into Sundance. The film gets to Utah, and the jury shockingly decides to select Lisa’s documentary, mainly because it’s the least mainstream sounding thing in the world.

But whatever the reason, the documentary is chosen, and Lisa gets the acceptance letter, prompting her to freak the hell out. So the family pile into the car and drive out to Utah, where the town is prepping for the festival. They get to wander around, and end up running into Jim Jarmusch, who just rambles some nonsense at them. You would think that this would lead to a non-stop barrage of indie filmmaker cameos, but luckily we’re spared that.

We then skip straight to the premier of Lisa’s documentary, Capturing the Simpsons. The family get to stroll right in while the bouncers keep Skinner and Chalmers out, and the documentary begins. And it’s not flattering. It’s a really in depth look at how insane the family is, taking delight in pointing out all their various flaws and foibles. The documentary is pretty depressing, which of course results in the crowd loving it.

But the family are less than thrilled. They’re a little mad at Lisa for pointing out all of their problems to the world, and show them to be monsters. Lisa gets super defensive, and tries to point out that this is an incredibly indie documentary playing at Sundance, and no one will care about it. Until Comic Book Guy shows up and writes a glowing review for his website, causing the whole world to know about the documentary and get the buzz growing.

Lisa’s documentary then becomes the talk of the festival, and everyone starts talking about it. Which just keeps pissing off the family. Hell, some producers even talk to Skinner and Chalmers about buying and distributing the movie. And all of this buzz leads basically everyone at the festival to know the Simpsons, and their flaws, and they start pointing them out, much to the horror of the family. So Lisa’s in trouble.

Lisa feels terrible about how upset the family is, and she ends up running into Jim Jarmusch again and asking his advice. He tells Lisa that everything’s going to be okay, and to demonstrate that he takes her to a screening of another documentary. And it turns out to have been filmed by Nelson. Skinner and Chalmers were backing two ponies. So Lisa settles down to watch Nelson’s film, and is pretty blown away.

Nelson’s documentary is even more depressing and bleak than hers, but it’s also incredibly moving. It’s all about how horrible Nelson’s life is living with his mother in a trailer while coping with her alcoholism. And when it’s over Lisa decides she understands what Jarmusch was trying to show her, that other people are living harder lives than her. But that’s not his message, what he was trying to show her was how fickle festival goers are, because now they’re all obsessed with Nelson’s documentary and don’t give a crap about hers. So the family go back to anonymity, everything goes back to normal, and Skinner and Chalmers try to court John C Reiley to play Willie in a movie. 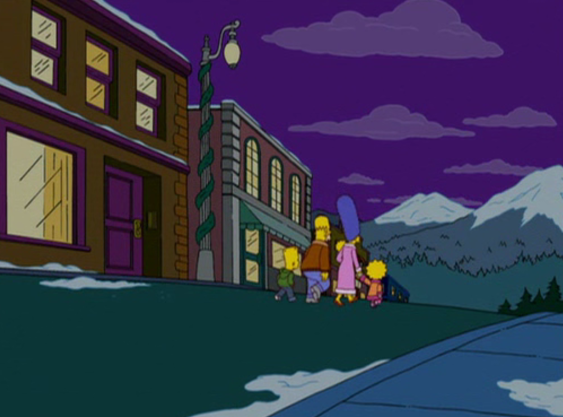 There really isn’t too much to this episode, but I still liked it well enough. Like I said during the recap, this episode easily could have become one of those cavalcade of celebrity appearances with a bunch of indie directors, just having the Simpsons wander through Sundance for ten minutes saying a single sentence to the guests, and we luckily didn’t have to experience that. It’s a little odd that they couldn’t get Redford for the episode, but I think just focusing on Jim Jarmusch was a good idea. I also really like the idea of Lisa finding a passion in documentary filmmaking, and that the whole school rallied behind her. I also think that the idea of the family being mad that Lisa exposed their flaws is pretty solid. I feel like it goes without saying that Lisa is going to be a success later in life, and whatever medium she chooses to express herself will probably involve her showing the family in an unflattering light. Not because she doesn’t love or respect them, but because she wants to show the truth, and the truth hurts. And the idea of having this documentary do just that is pretty solid.

Take Away: It’s fine to talk about your life experiences, but maybe be cognizant to the fact that your family may not appreciate having their lives exposed just because you want your life exposed.

“Any Given Sundance” was written by Daniel Chun and directed by Chuck Sheetz, 2008. 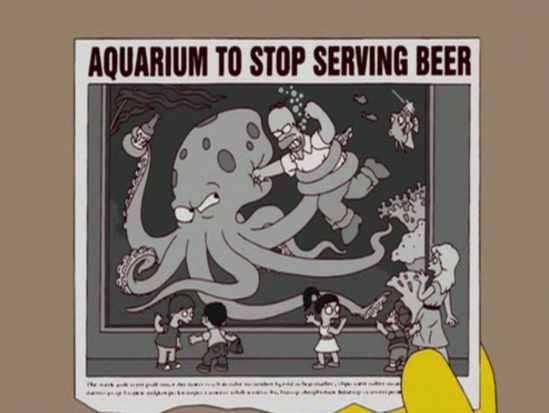 Tagged as: 2008, Any Given Sundance, Lifetime of Simpsons, Season 19, the Simpsons