You know, we haven’t had an episode where a Simpson fostered a relationship between a random animal. We’ve had elephants, bears, Bolivian tree lizard, and horses, so that means there’s an obvious next step. Cows. And I think it would look a little something like this.

The episode starts off with Bart and Lisa watching Saturday morning cartoons, which are curated by Krusty. Because I guess Krusty is basically on 24/7. And the cartoons are dreadful. Case in point, the kids are watching some sort of Koren cartoon about clown robots fighting pterodactyls while begging children to buy their breakfast cereals in order to get the power to defeat the pterodactyls. And this superliminal marketing really works, because Bart and Lisa beg Marge to buy them the clown cereal.

Marge refuses though and feels disgusted that the kids are watching a show that’s literally just a giant commercial. So she forces the kids to watch golf instead. And this just results in them requesting expensive golf gear, which is even worse. Marge realizes that this is a no-win situation, so she decides to just occupy the kids in different ways. She has Lisa make banana bread with her and sends Bart off with Homer to go get their bean-bags refilled in Shelbyville.

Homer and Bart get in the car and start driving off to Shelbyville, which is now separated from Springfield by vast stretches of farmland. And when they’re driving past some farms Bart notices a giant combine harvesting some wheat, and he decides that it’s cool. What’s not cool is that the person driving the combine is Martin. Bart yells at him, trying to figure out how Martin is getting to do something this cool, and Martin explains that he’s a member of the 4H club, which is apparently still a thing.

Bart is instantly sold on the idea of the club, and demands that Homer goes to sign him up. Homer’s cool with it, and they drive over to the farm that Martin is working on, signing Bart up for the club. And about ten minutes later Bart gets to straight up operate a thresher, with no supervision. Seems like a pretty cool club. But Bart does appear to be a natural, and he quickly is able to operate the machinery like a pro.

But it’s not all about giant machinery, because Bart soon learns that the club’s summer project is to raise calves, and it’ll be a competition. So all of the children run into the pen and start picking their little calves. And poor Bart gets stuck with the runt of the group, getting the smallest and sickliest of them all. He desperately tires to get rid of the little calf, but there’s nothing he can do, and he gets stuck with the runt.
And it also becomes clear that Bart has no idea how to raise a calf. And that struggle is quickly picked up by a girl named Mary, who takes pity on Bart and Lou the cow, and starts to help him. She teaches Bart the basics, and Bart actually starts to do great after that. He starts spending all of his time with Lou, bonding with him and slowly but surely getting him better and better. Lou starts plumping up, and reaches the point where his only real competition is Nelson’s cow, which has gotten quite beefy already.

But by the end of the summer it turns out that Bart’s methods were superior, because Lou is easily the biggest cow, and the winner of the competition. And it’s at this point that Bart learns that the real prize of being the biggest cow is that he’ll make the most money in an auction before getting slaughtered. And Bart is horrified. He had no idea that Lou was going to get killed, and begs Homer and Marge to buy Lou for him, so that he won’t get killed. And they aren’t quite sure how to break it to him that this is going to be impossible.

So Bart has no recourse to save Lou, and has to go home to start being driven mad by guilt. He can’t sleep that night, hearing the sounds of Lou mooing all night in his head. Lisa comes strolling in at one point, and tries to explain to Bart that that means he should give up on meat and become a vegetarian like her to honor Lou. This is when Bart realizes that the mooing was actually from a CD of barnyard animals that Lisa had planted to scam him. She admits to the scam, but then does offer to help Bart break Lou out of the feedlot.

Bart and Lisa then head to the feedlot, where they meet up with two grungy hippie friends of Lisa’s that help them cut through the fence. And once they’re inside Bart and Lisa begin hunting down Lou, and finally come across him. And he’s gained a whole bunch of weight, thanks to all the crazy growth hormones that they’re feeding him. Which is going to make the whole escape a little more difficult. But Bart is able to operate a forklift and carry Lou out of the feedlot, and head to freedom!

But then the question of where they’re going to take Lou arrives. The kids know that they can’t bring Lou back to the home, so they’re in a bit of a bind. But then Lisa remembers that girl Mary that Bart befriended at the 4H Club, who lives on a farm. So they decide that that’s a great alternative, and they head to Mary’s farm, which turns out to be Cleetus’ farm. Yep, Mary is one of Cleetus’ innumerable children.

Bart finds Mary at the house, and asks if she can take Lou and have him live on her land. She accepts, and things get insane. Because it turns out that in hillbilly culture offering a girl a cow is a formal proposal of marriage. And since Mary accepted, she and Bart are now engaged. Whoops! But Bart is in a bit of pickle, since this could get Lou a home. So he goes along with it, at least for now, and Lisa runs off to try and figure a way out of this.

Lisa races home and tells Homer and Marge what’s going on, and they’re horrified. But Marge pretty quickly comes up with a plan, and they shortly head over to Cleetus’ farm, where they find that the wedding is already about to begin. Apparently the Spuckler’s are quick planners. Things have even advanced to the point of the vows, and Bart and Mary are terrified that they’re going to have to go through with this, because Lisa still hasn’t shown up with a plan.

But Marge comes to the rescue, and starts trying to give a speech to block the vows. And she actually does a good enough job that they decide to call off the wedding, but that means Lou is going to have to go back to the feedlot. Bart is crushed, but there doesn’t seem to be an alternative, and he sees Lou get picked up by the feedlot workers. But when the truck starts to leave, Bart realizes that it’s not Lou inside the truck, it’s Homer in a costume. The real Lou is being taken to the airport where Apu is waiting to fly Lou to India where he’ll live like a god. Meanwhile, Homer is about to be slaughtered. But they save him right in the nick of time, so everything’s fine.

This is kind of an odd episode, because it really feels like two distinct plots. The Lou plot and the marriage plot are linked together, and they don’t feel like they’re tangential to each other, but they still feel like very different stories. And while I actually really liked the marriage one, the Lou plot kind of fell flat for me. I think the Lou thing was such a familiar story, especially with Bart, and it just didn’t do anything new for me. Bart has had lots of stories about him bonding with some animal and doing his best to keep them safe from danger, and this one didn’t really add anything new to that formula. And while, yes, I’ve also seen Bart almost get married to someone recently, this one was more entertaining. Bart accidentally proposing to a hillbilly girl and getting tossed into a shotgun wedding was really goofy and fun, and really lifted an otherwise mediocre episode up at the last minute.

Take Away: Be careful what you give a hillbilly, their customs are mysterious.

“Apocalypse Cow” was written by Jeff Westbrook and directed by Nancy Kruse, 2008. 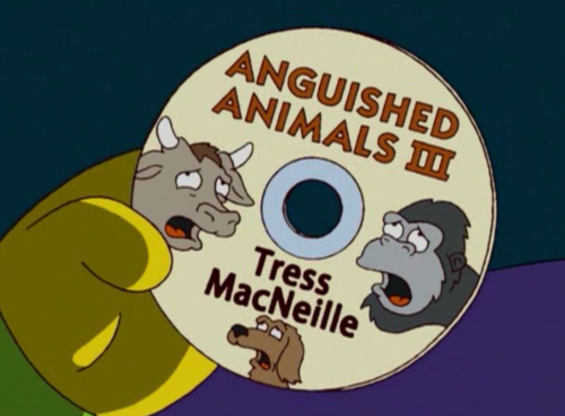 Tagged as: 2008, Apocalypse Cow, Lifetime of Simpsons, Season 19, the Simpsons