Hey everyone, so after yesterday’s insane episode you know what I was really excited for? More episodes with Lisa going outside her comfort zone. And luckily, I got one immediately with today’s episode. Because this sure does some interesting stuff with Lisa. I’m not quite sure yet if it was successful, but it’s at least something different.

The episode starts off with Bart sleeping in his room, when some sort of horrible snake monster crawls into the room. Bart wakes up and obviously starts to beat on it with a baseball bat. Which was a bad call, because it turns out that it’s just Homer in a costume. He’s apparently dressed up as the villain of the Angelica Button books, you know, from “The Haw Hawed Couple.” Lisa and Homer are ready to go to the midnight release of the new Angelica Button book, and for some reason Bart has to come too.

So the whole family pile into the car and drive off to a huge bookstore in the middle of the night to stand around and wait for a children’s book. And they aren’t alone. They have a whole crowd of people dressed up as characters from the books. And after a while of standing around the doors are opened and the crowd pours into the store, ignoring all manner of rules and just riot. But the family are able to get several copies of the book, and head on home.

However, on the way home Lisa just speed-reads the book, and skips ahead to spoilers, allowing the family to not actually read the books. I’m not sure why they did this, but whatever, they get home and realize that it’s the middle of the night and they don’t have books to read, so they should just watch TV. They just start flipping late-night channels, trying to check out CSI and ET, but Bart just keeps ruining all the suspense.

But they do see a commercial for a new ballet studio opening up that’s being run by a weird New Jersey dancer named Chazz Busby. And Marge is stoked. Turns out she loves ballet, and had wanted to be a ballerina for quite some time. Lisa is shocked by this, and Marge brings her to a “box of shattered dreams” to show Lisa some exposition. Marge had been really great as a ballerina when she was little, but her breasts ended up ruining her balance. But Lisa decides that she should convince Marge to give it another shot, and they decide to go check out Chazz’s studio. 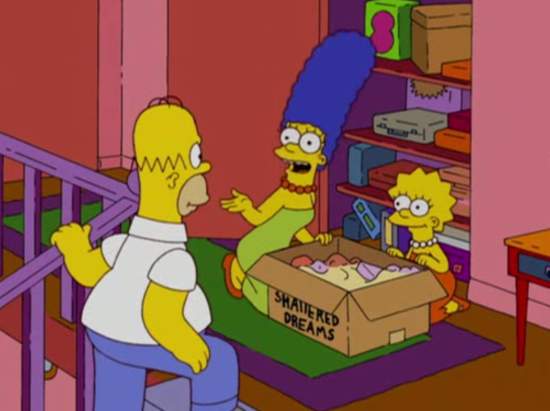 So the next day Marge and Lisa head to Chazz’s studio and Marge signs up for classes. And much to everyone’s surprise, Marge does pretty well. She’s able to perform most of the moves, and Chazz allows her to stay. However, she runs into an issue when she’s unable to raise her leg high enough for one move, instantly earning the ire of Chazz. She’s then kicked out of the studio, and sees her dreams crushed once again.

While all of this is going on, we begin the completely nuts B-Plot, which starts off with Homer and Bart finding something to bond over while Lisa and Marge are gone. Homer announces that he has something special to show Bart, and brings him down to a secret room in the basement. And in that room is a huge slab of meat, which Homer is slowly turning into jerky. Yep, Homer has an indie jerky operation going on, and he wants Bart to help.

Back at the ballet studio, Marge is pretty crushed, and Lisa decides to yell at Chazz for ruining her dreams. But while Lisa is yelling Chazz realizes that Lisa has great posture, and offers her a place in the studio. And Marge immediately insists that Lisa does it. So, kind of against her will, Lisa begins participating in ballet, even though we’ve established that she has no rhythm and can’t tap dance in previous episode. And this is no different.

Lisa is doing pretty terribly, but Chazz doesn’t kick her out, instead forcing her to keep failing. And during a break Lisa decides to ask the other girls for some advice. They’re largely unhelpful, but they do tell her that she needs something to calm herself down and keep her thin. Therefore they tell her that Lisa’s going to have to start smoking cigarettes. Lisa is pretty horrified by this suggestion, and refuses to smoke. Instead she just stands around with the girls, inhaling all of their second-hand smoke.

And when they go back inside Lisa finds something shocking. She’s dancing great now. She suddenly has a lot of focus, and is able to pull off the complicated moves. And it’s kind of hard for her to argue against the results. But that doesn’t mean that she likes it. The smoke starts to wear on Lisa’s conscious, and that night she struggles to sleep, until she’s visited by a ghost of her future self, made of smoke. Smoke Lisa tries to convince her that all of Lisa’s idols smoked, and that it’ll be okay for her to do it. 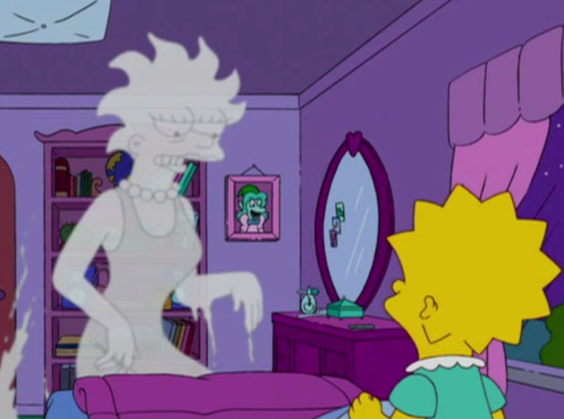 Oh, hey, how’s the jerky thing going? Oddly. Because Homer’s jerky operation has reached the point that he and Bart bring Apu to the house to sample their wares and possibly sell them at the Kwik-E-Mart. But when they get to the basement they find the jerky closet empty, and the cellar door chewed through. Obviously some little animal has gotten inside and stolen their jerky, and Apu is not pleased, choosing to take his business elsewhere.
So Homer and Bart decide that they need to find what stole their jerky, and get vengeance for scaring Apu away. So they follow some tracks into the back yard, and find two raccoons eating their jerky. The fact that the raccoons look like Homer and Bart is not lost on them, but still decide to wage war on them. That night Homer and Bart leave some jerky out with sleeping pills, but Homer ends up eating it instead. They try again the next day, and go straight into the raccoon’s home in a tree, and find something surprising. There’s a whole family of raccoons, looking like Marge, Lisa, and Maggie, and they decide to let them live peacefully, becoming friends with the raccoons.

Anyway, Lisa is not doing great, and her reliance on second-hand smoke is still really weighing on her. But she can’t quit ballet, because Marge loves it so goddamn much, and has become living through Lisa like crazy. So Lisa just accepts her fate and begins huffing as much smoke as she can. Up until the point that the second-hand smoke just isn’t good enough, and she decides to smoke a real cigarette. Which is right when Homer shows up to pick her up.

Homer is horrified at Lisa’s behavior, and starts lecturing her about how horrible cigarettes are. Lisa tries to defend herself, but realizes that she really can’t, and just accepts Homer’s shame and disappointment. So Homer takes Lisa home, lecturing her the whole way, and plans on telling Marge what happened and demand that Lisa stops being in ballet. But when they get home Homer sees how happy Marge is, and decides he can’t break her heart. So he lets Lisa continue ballet, but makes her promise that she won’t smoke anymore.

However, without the second-hand smoke Lisa finds that she’s still terrible at ballet. So she decides to just give in and start inhaling the smoke again. Which was a bad call, because Bart is stalking her, and reports back to Homer that she broke the rules. But Homer doesn’t do anything to Lisa yet, because that night is their big ballet recital. Instead he decides to do something insane. He goes to the studio during the first act, and sends the Homer raccoon into the locker room to steal all of the cigarettes.

This plan works, and during intermission all of the ballerinas come into the locker room and find their cigarettes gone. And this causes the girls to flip out. They all turn terrible, and have a disastrous recital, until all going crazy and freaking out. Lisa then takes the opportunity to tell the crowd how weird, stressful, and demanding ballet is, but no one seems to care. So Lisa quits and the family go home to eat ice cream together, deciding that being happy and healthy is more important than having Lisa do ballet.

I’m kind of conflicted about this episode. On the one hand I really love the premise. I’m kind of shocked that we haven’t had an episode about one of the kids dealing with the pressure of cigarettes, and I think they handled it pretty fantastically. I completely buy the idea of Lisa allowing herself to participate in some activity that she doesn’t like to make Marge happy, and the way that they handled the idea of peer pressure was pretty great. Lisa just wants to make Marge happy, and being good at ballet will do that. So she has to smoke, because that’s what makes her good at ballet. It’s a vicious cycle, and seemed pretty realistic. On the other hand, I don’t know if the actual episode actually lived up to its premise. The jokes kind of weren’t there, and there were a lot of weird plot decisions that kind of kept me from really liking the episode. The jerky plot was kind of strange, but I guess it was fine. At least it wasn’t as distracting as yesterday’s B-Plot. I feel like this is an episode that I respect more than like, which is still a step up from a lot of the episodes from the last couple seasons.

Take Away: Don’t smoke. It’s fucking disgusting, terrible for you, and everyone around you.

“Smoke on the Daughter” was written by Billy Kimball and directed by Lance Kramer, 2008.

Tagged as: 2008, Lifetime of Simpsons, Season 19, Smoke on the Daughter, the Simpsons